Jo Arnell gets ahead this month in preparation for a productive year in the garden.

In the quiet of late winter I’m easily pleased by the faintest signs of life – it fills my heart to see a bare branch laced with delicate blooms and a few dainty woodlanders spreading softly under shrubs and trees. Before long there will be an avalanche of spring bulbs, a joyous whoosh of foliage and blossom galore (Pussy’s gardening sister). It’s still very cold and early, but the plants are responding to the increased light levels (remember how dark it was in December? It really is much lighter now) and although only the bravest shoots are peeking out at us, everything is beginning to wake up. So if you feel like it (there’s no mad rush), we can get ahead of the game and get a few jobs done.

You might have to take a magnifying glass out with you or be prepared to bend down low, but there are potentially lots of early blooms to cheer us through the last bleak winter days. Many of the first flowers to appear are scented, especially those on early flowering shrubs, like Chimonanthus praecox (Winter Sweet), Lonicera fragrantissima, or Viburnum bodnantense ‘Dawn’. A few twigs of these make lovely additions to indoor vases; left in the garden the nectar they contain is very welcome to any insects that have woken up early. Once snowdrops have finished flowering, lift and divide them while they’re ‘in the green’ (foliage still growing). You can then replant the divisions in areas where you want them to spread around and naturalise.

It gets really tough for animals at the tail end of winter. Much of the food has gone, the weather is still bitterly cold and surviving until warmer days becomes a daily struggle. We can feed and provide clean, fresh water for the birds, but it also helps to grow a wide variety of plants that will provide wildlife with food and shelter. Choosing plants that bear fruit and berries extends the season and provides us with interest (and Christmas decorations), but it is also a vital resource. Existing native plants are fantastic larders for wildlife – a humble patch of old ivy will have long lasting, nutritious black berries and also provide shelter for many creatures. Log piles and uncut herbaceous stems provide shelter for insects, reptiles and amphibians. It’s always a source of comfort to me (and a good excuse) that tidy gardens are not the friendliest to nature.

There’s always something that needs pruning, whatever the time of year. That’s half the problem with pruning – learning which plant to prune when. The other problem is matching up the neat and sensible diagrams in the books with wayward reality. You can prune hardy deciduous plants in late winter and early spring, but don’t prune tender evergreens until the weather has warmed up. February is the ideal time to prune the following:

Roses… Prune shrub roses before they start to shoot. You can prune roses quite hard, as they are tough plants and should respond well. (It doesn’t sound quite right though does it – ‘as tough as a rose’?) The trick is to prune so that the new growth will form an attractive, rounded goblet shape.

Hardy hedges… Prune deciduous and any really hardy evergreen hedges to maintain a good structural shape. You may need to prune again later in the year, depending on how fast the hedge grows.

Late flowering clematis… First work out when your clematis flowers. If it has large blooms and flowers in July/Aug then cut it hard back now. If it’s early summer, just lightly trim to tidy and keep to the framework, as these flower on last year’s wood and hard pruning will prevent it flowering. If it flowers in the spring, then prune after it has flowered – so not now.

Deciduous ornamental grasses… Cut these back right to the ground before the new shoots begin to grow. Be careful here because some grasses are evergreen – they might look dead, but something like Stipa gigantea or tenuissima just needs the tatty old foliage combed out – there will probably be some fancy ‘grass comb’ available for this soon, but grasses are so tactile that it’s not a chore to run your fingers through the fronds.

Prepare the soil… by layering on a snug blanket of organic matter and then leaving the worms and their friends to do the digging in for you. If you join in with the digging, you’ll upset the soil creatures and spoil all the hard work they’ve already done for you. The rule for soil preparation these days is no-dig. Hooray.

Sow some early crops… The soil can be warmed in readiness with cloches or plastic sheeting. This will protect it from the worst of the wet and frozen weather and allow you to start planting a bit sooner. Hardy vegetables like peas, broad beans and spinach can be sown directly into the soil towards the end of the month. Sow leeks and onions this month too, but in a pot under cover to plant out a bit later on.

Sow tender veg… Tomatoes, peppers and aubergines need a very long growing season in order to ripen successfully in our climate. Tender crops will be destroyed by the slightest frost – only sow them from seed if you have somewhere light and warm to grow them until all danger of frost is past, so until May. Don’t despair if you can’t accommodate all those tender seedlings, as the garden centres stock young plants later in the season.

Chit early potatoes… Chitting is a term that means letting your potatoes start to sprout sturdy new shoots – preferably somewhere light and airy (not like the ones we find at the bottom of the fridge). The idea is that they then get off to an earlier start and will produce a bumper harvest more speedily. Chitting works quite well with new, or early potatoes, but is not essential.

If you suddenly decide that a shrub has been planted in the wrong place, there’s still time to move it before growth starts. I don’t know why I call it ‘musical’ plants, there’s rarely any music in my garden, but what tends to happen is that once the first plant has been moved, you might find that several have to be relocated to make the change work successfully overall (I find the same moving furniture around in the house). In theory the best time to do this is in the autumn, so that the plants have time to establish new roots over the winter – the recommended time for moving evergreens is around October, but deciduous plants go into dormancy and so there’s still time to move these. Herbaceous perennials can be lifted and divided now too.

Spring does still seem a long way off I know, but I can’t help having high hopes at this time of the year. All is promise and plans – and the joyous rustling of seed catalogues and packets (remind me not to get so carried away with them next year). Despite appearances, the garden is about to burst into life again. Soon there will be endless (but rewarding) jobs to be getting on with, but for now we can enjoy the last of the quiet winter days and make plans for a gorgeous gardening season ahead. Let’s tiptoe out there. 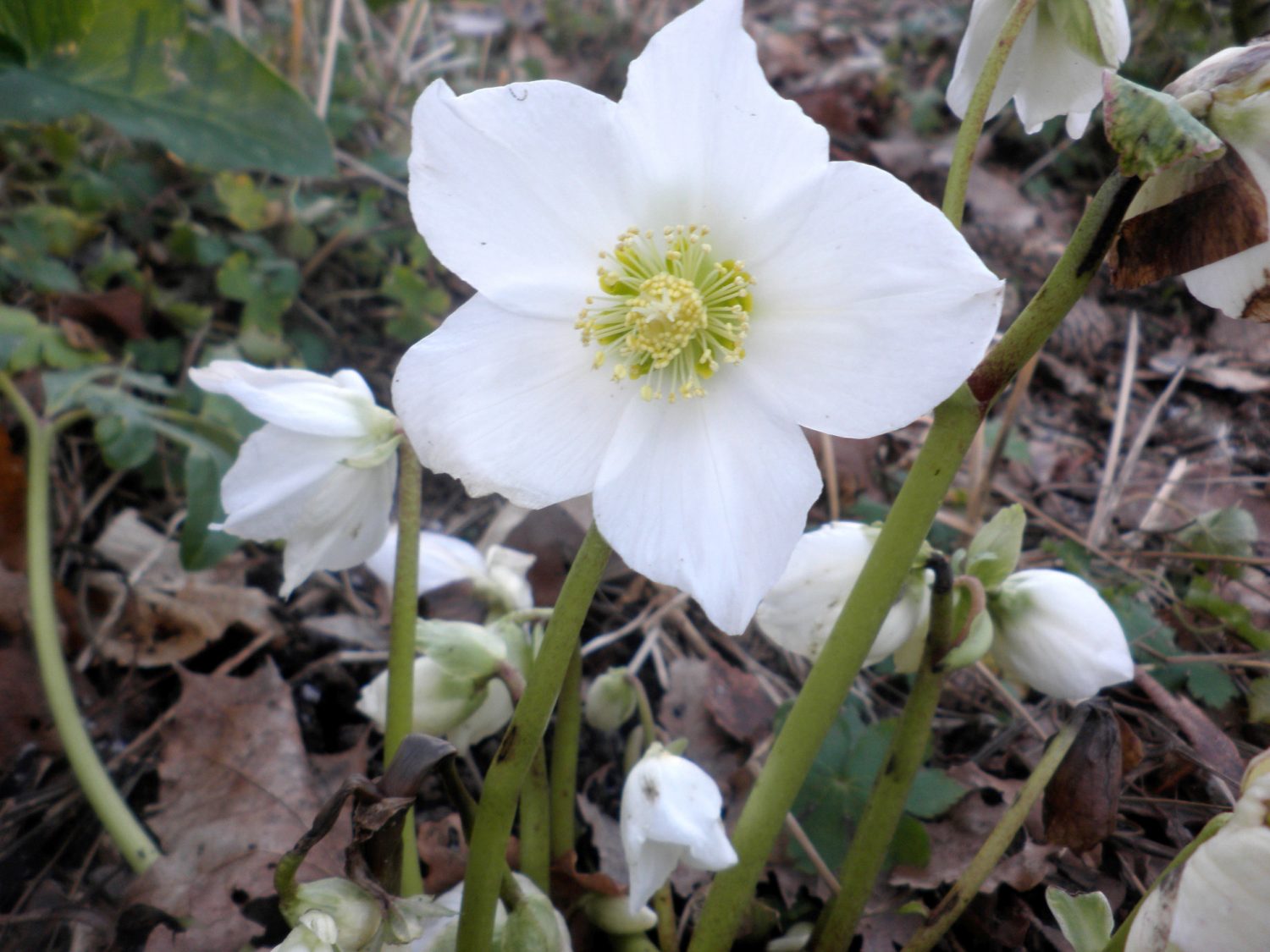 Hellebores brighten up the colder months 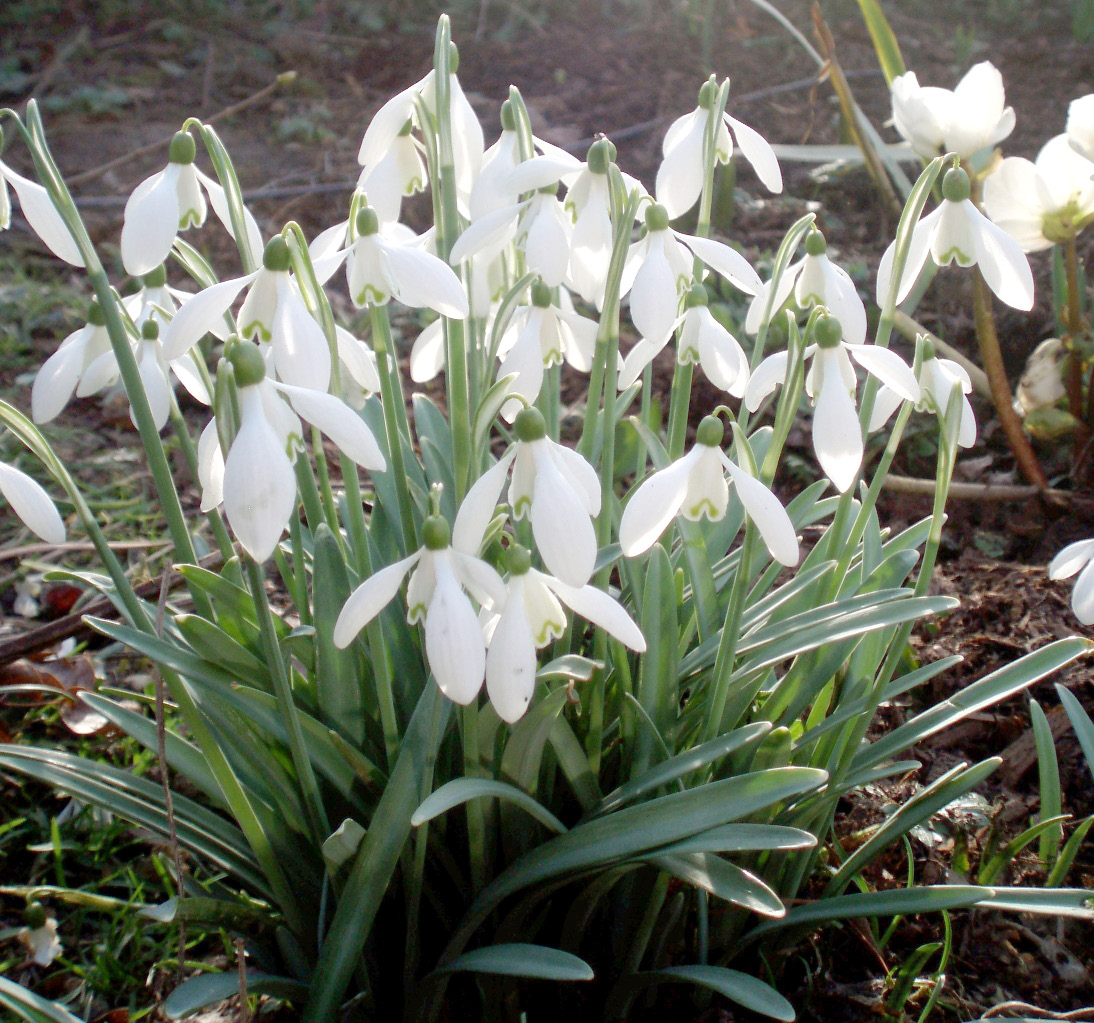 Once snowdrops have finished flowering, lift and divide them while they’re ‘in the green’ 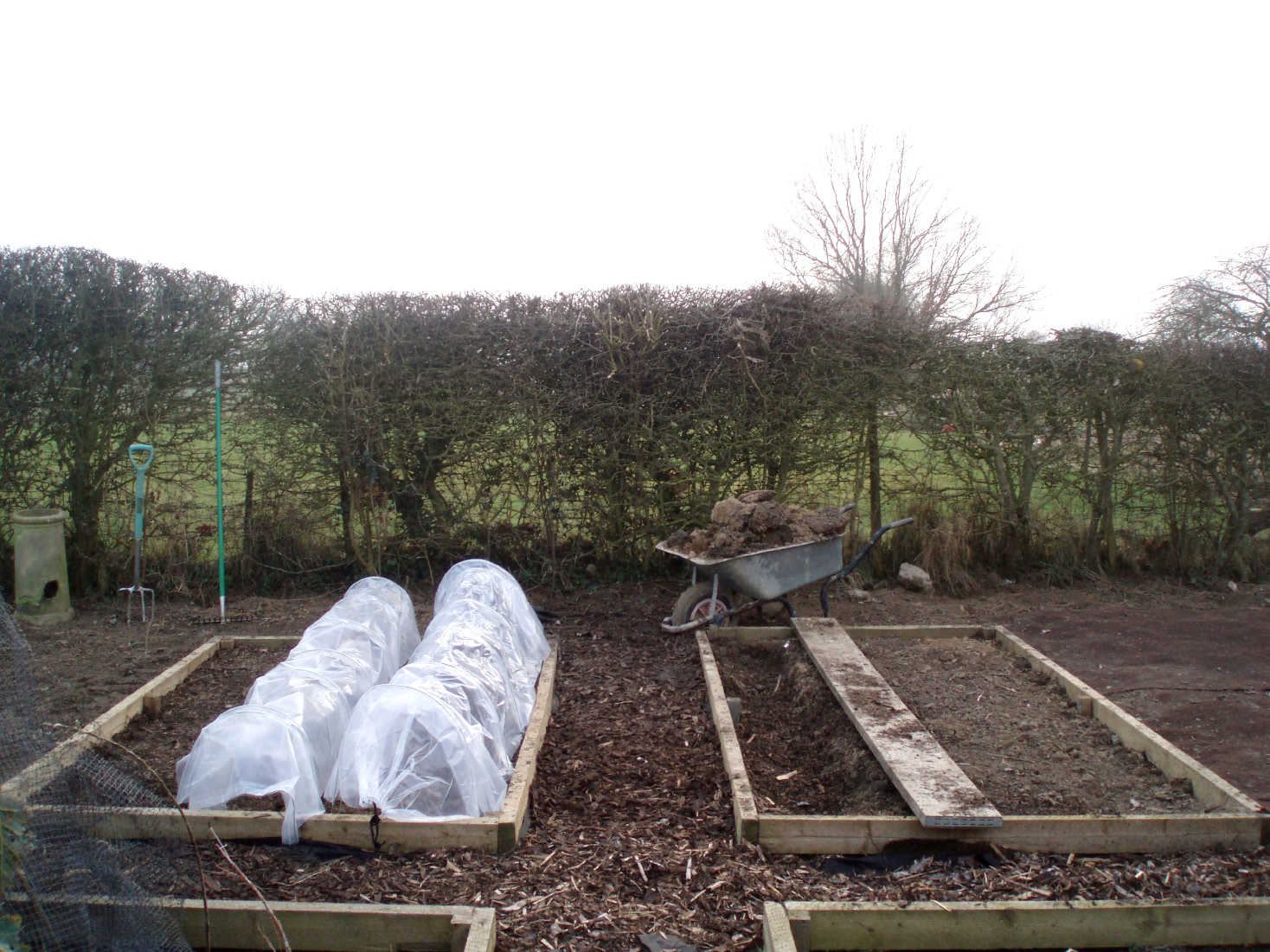 Sow some early crops... The soil can be warmed in readiness with cloches or plastic sheeting 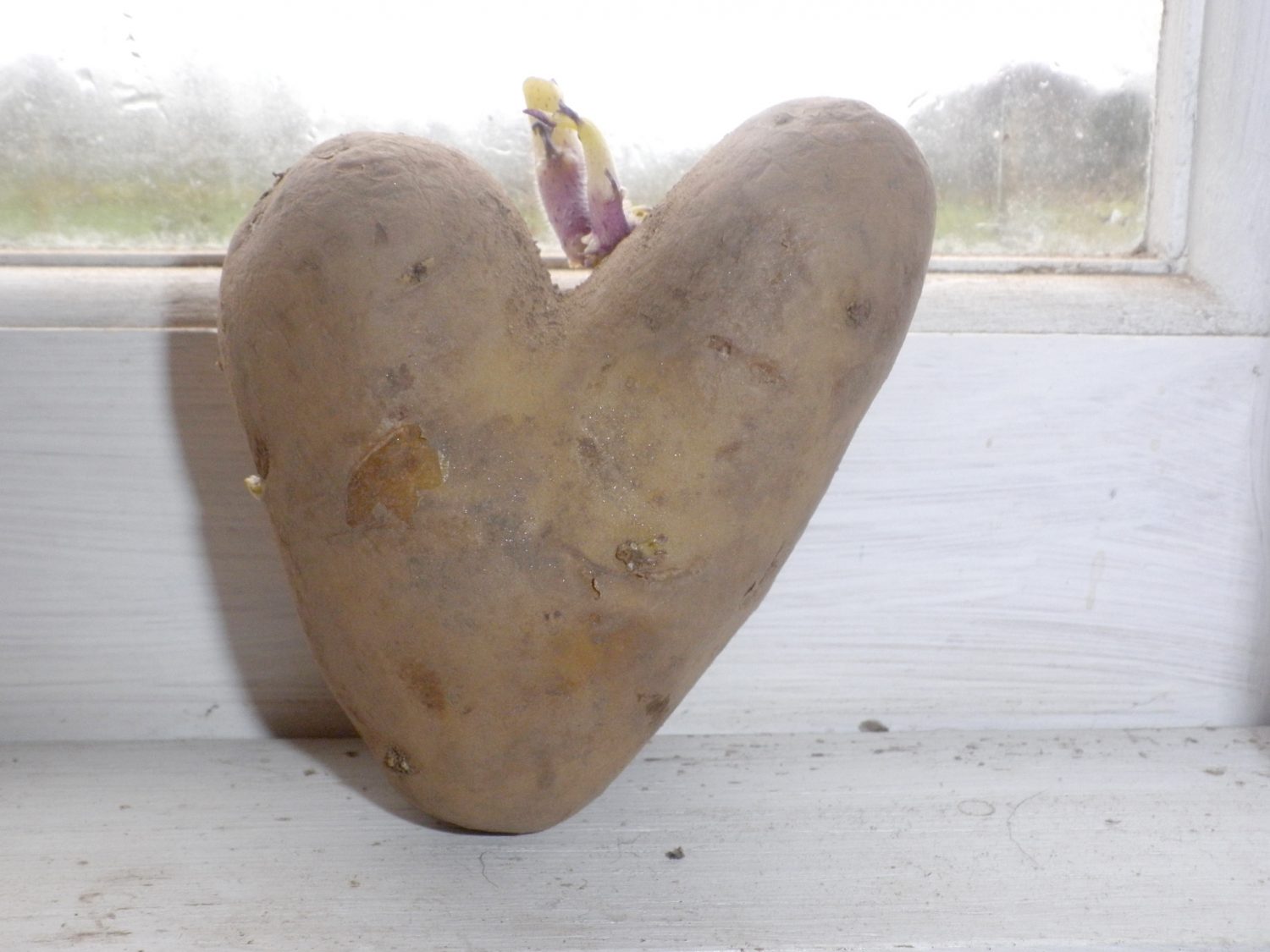 Everyone loves a potato