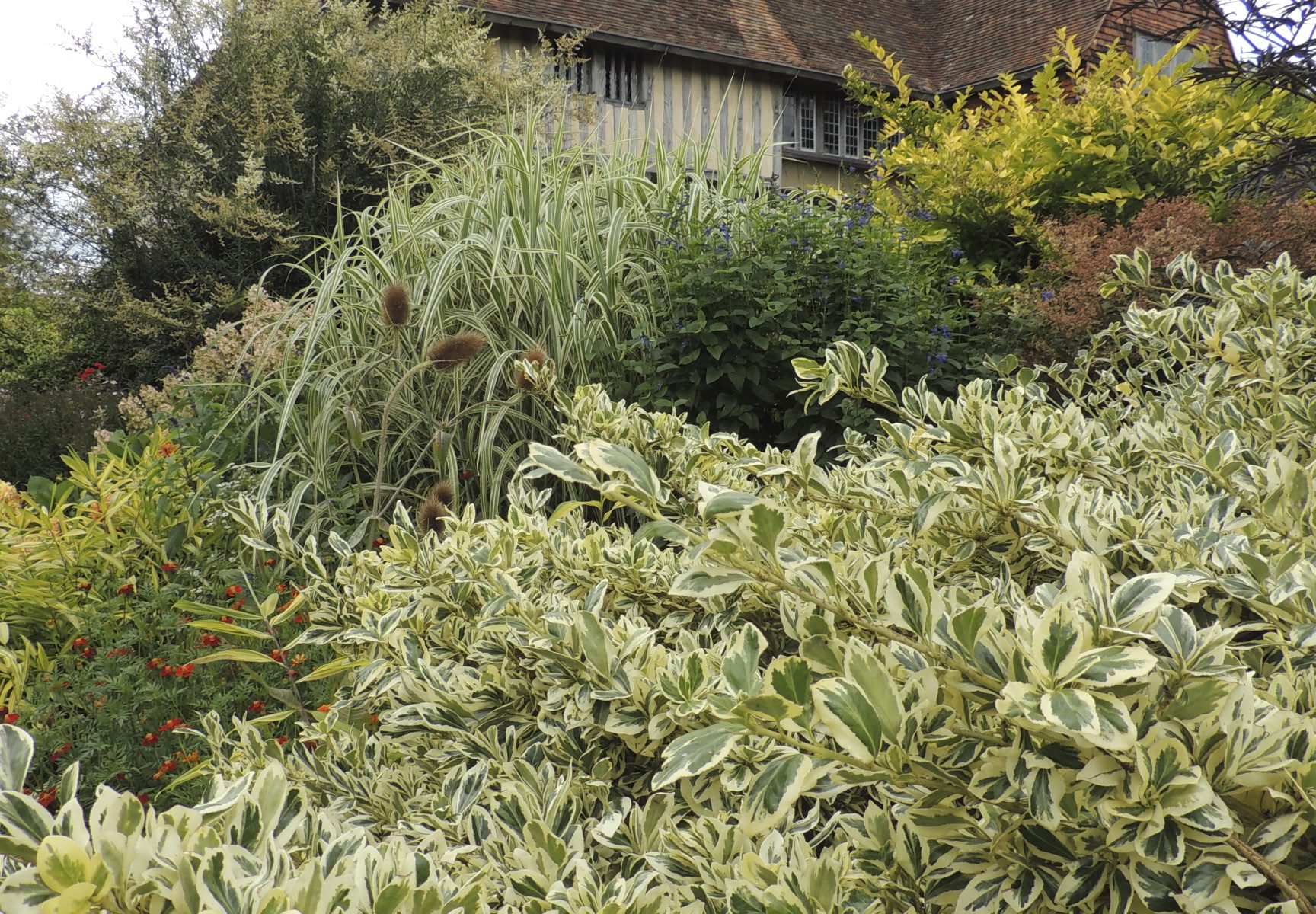 With thoughts turning to autumn I thought I’d mention a few shrubs and trees which are invaluable for the quieter time of the gardening year whether it be for the promise of scented winter flowers, stem colour or their evergreen leaves. Some of these plants aren’t particularly unusual and I spot a few of them planted up outside supermarkets as ground cover and then hacked into submission so that they become quite unrecognisable. I feel quite a pang when I see the state they are in. This needn’t happen!

First off is one of these poor mistreated plants and is one of a large genus of hardy, ornamental plants. One of the main attributes of the cotoneasters is bright and brilliant autumn colour combined with bee friendly flowers in mid summer. Cotoneaster horizontalis was introduced from Western China by the intrepid Père David in 1870. Its branches grow in a herringbone pattern and it’s perfect for planting on a bank or up against a shady wall. The contrast between its leaves in their autumn coats and bright red berries is quite glorious. And of course in the winter the skeleton looks quite architectural especially with a light dusting of frost on it.

Another plant I would choose would be Cornus mas. The joy of this plant, also known as the Cornelian cherry, is that it is very densely branched and in February they come alive with masses of small yellow flowers which grow directly from the branches. There is a very choice cultivar called ‘Golden Glory’ which is pretty vigorous and has an upright habit. Its fruits, which are edible but a little acidic, are large and the flowers bright. Plant this against a dark backdrop. It’s quite something to see a tree covered in a mass of flowers at this time of year.

Azara microphylla was introduced from South America and can be a bit battered in a cold winter so is best planted in a sheltered, slightly shady spot. I like it both for its dainty leaves and the promise of its tiny scented flowers that appear, like Cornus mas, on bare twigs.

The next plant is so well known that you would probably wonder why mention it but it is such a key evergreen plant in borders, grows vertically when given a comfortable wall to lean against and is an all round good egg. It grows in any old soil or aspect and responds well to pruning although routine pruning is really not necessary. Those of you who have visited Great Dixter at Northiam will have seen a large specimen of Euonymus fortunei ‘Silver Queen’ in the Long Border. It always looks good and its new leaves in spring are a rich creamy yellow which eventually mature into green with a showy creamy white outer margin.

Salix udensis ‘Sekka’ is a Japanese clone of S. udensis and it is one of my favourite plants. Also known as the Dragon Willow or Japanese Fantail Willow, this has everything going for it really, from shiny dark chestnut brown shoots to wonderful rich yellow autumn colours. And then there are the distinctive upright catkins which appear before the leaves, the males of which are very long and decorative. But the pièce de résistance is the way that the stems fasciate on mature plants – they curve and flatten in all sorts of directions and its no wonder that the plant is widely grown in Japan for the flower market. It’s a very exotic looking willow, very different from any other you might see and well worth growing. Bluebell Nurseries have it in their catalogue (along with the most mouth watering selection of shrubs and trees).

I think that I’ve written about coronillas before but every garden should have one. They are members of the Leguminosae family (peas) and Coronilla valentina subsp. glauca ‘Citrina’ is particularly pretty with its soft yellow flowers. Make sure you plant in a sunny sheltered position and that you don’t move the plant once its established. They really don’t like it. The leaves are pea like, rather fleshy and a bluey green but the joy is that the fragrant flowers continue for a hugely long time – from winter through to early summer. There is a variegated form with creamy white leaves. Its not the sort of plant that will go on for a lifetime but it is worth growing for its scent in the depths of winter.

Coronilla valentina is another plant rather like Cotoneaster horizontalis which is under appreciated. It’s just fabulous in a semi shaded corner or in a container and gives a tropical feel to the garden, although it originates in Japan rather than south of the equator.

Fatsia japonica is a really good looking plant with huge polished dark green palmate leaves. In October creamy white panicles of spherical flowers appear followed by large clusters of black fruits. The fatsia is perfect for exposed seaside gardens and it’s well worth looking out for a couple of cultivars with interesting extras. ‘Murakumo-nishiki has leaves with a central yellowy-green blotch and the better known ‘Variegata’ has white tipped leaf lobes.

A good friend of mine has a wonderful specimen of my next plant and there was almost an international incident in the spring when there was talk of removing it in its entirety as it has grown so well but partially blocks a path. It had a reprieve and because it has been regularly trimmed into a large pin cushion shape, hers is a lovely thing. Pittisporums originate from Australasia and SE Asia but this particular one was found in the wild by a Mr. Paterson near Christchurch, NZ when he worked for the Parks Department in Dunedin. Named after his wife, Pittisporum tenuifolium ‘Irene Paterson’ is one of the most decorative pittisporums you can grow. It has small, wavy, palely marbled leaves, each with its own particular combination of colours, and all this on elegant thin black stems. It is a plant that looks perfect all year round and its spring time treat of tiny scented flowers in the axils of the leaves is a bonus. Plant one near your path (not too near!) or a seating area where you can perch and take in the scent. 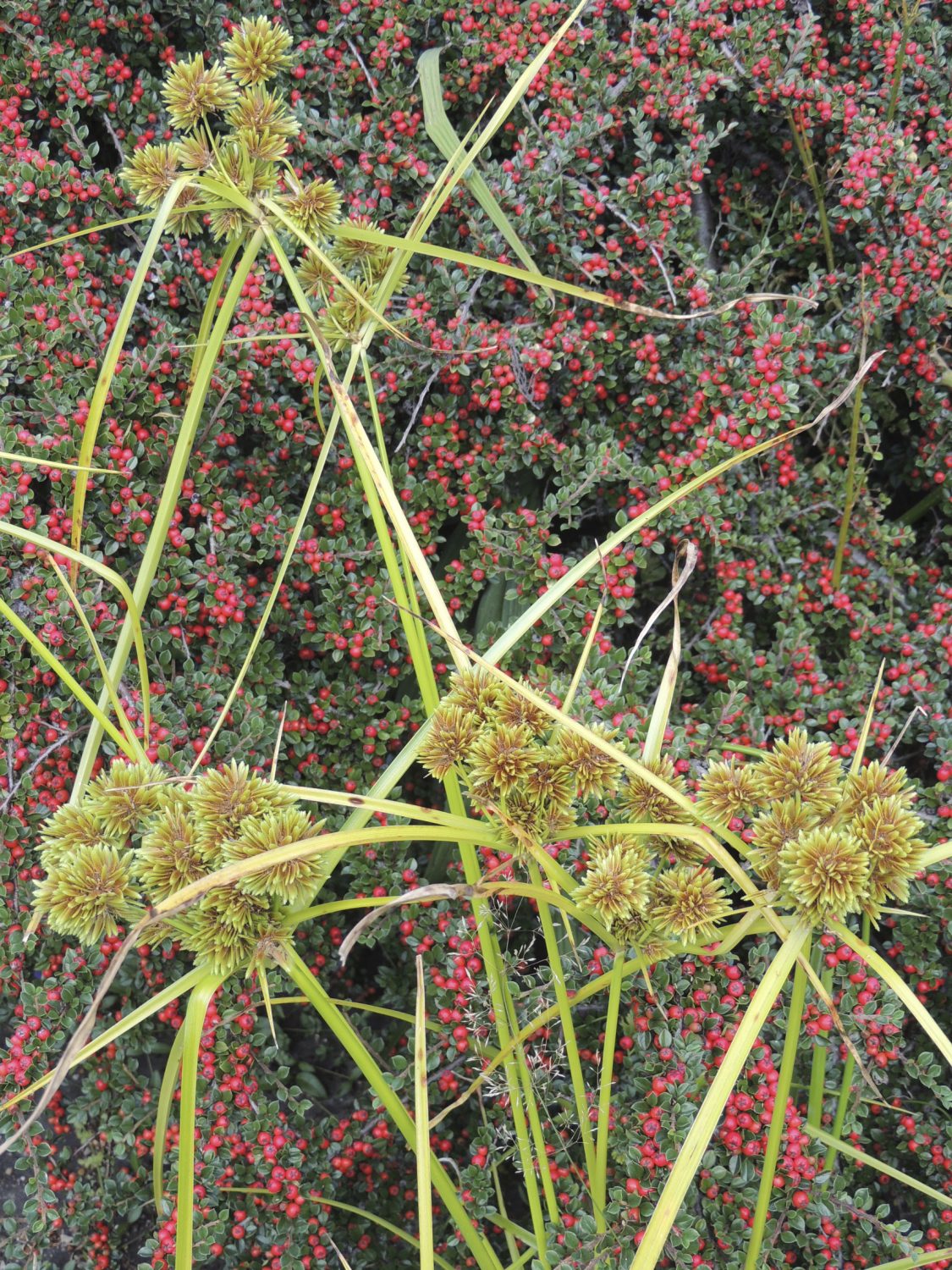 Cotoneaster horizontalis was introduced from Western China by the intrepid Père David in 1870. Its branches grow in a herringbone pattern and it’s perfect for planting on a bank or up against a shady wall