Keeping Chickens – Pets with a Purpose 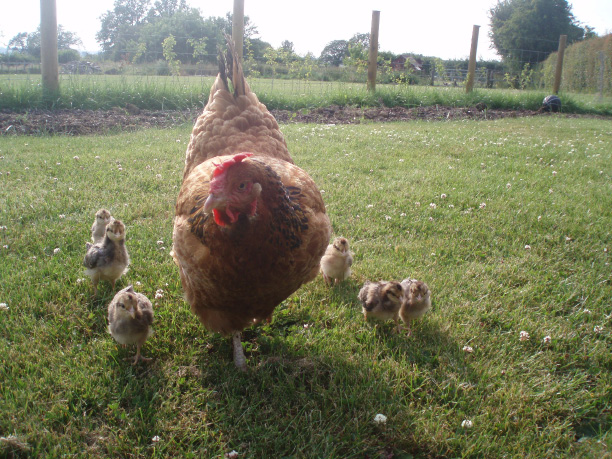 There are 24 billion chickens in the world – that’s a fact, not a line from a Katie Melua song. If you divide that by 7 billion humans, that’s three and a half hens each, which is about the number you need to supply a family of four with eggs (half chicks only exist in stories, so round up or down depending on how keen on eggs the family is). Henkeeping is growing hugely in popularity – in theory anyone with a garden can keep a few hens, although you may need to check with the council, as there can be restrictions, especially in built-up areas.

I asked two local henkeepers Jacqui Young and Wendy-Ling Relph from Tenterden, what the appeal is to them. Jacqui, who has four hybrid hens, says: “Once you’ve tasted your own really fresh, incredibly tasty eggs there is no going back. Even the humble boiled egg feels like a treat. The most expensive shop-bought ones don’t even come close when it comes to taste. And the yolks are the most amazing bright, almost luminous, yellow.” Her hens live in a large run at the bottom of the garden, but are free range some of the time. It’s eating grass and greens that makes the yolks so yellow. Jacqui happily feeds weeds to hers – “Just throw them in! Comfrey is very good for them and it gives them something to do, scratching about and pecking around.”

Wendy-Ling and her family have 5 hens (3 ex-battery) and a handsome cockerel called Rufus. “They are pets with a purpose,” she says. “There’s nothing more exciting than picking up a warm egg from the nestbox. And an egg is such a good start to the day. It gets the children away from sugary cereals.”

They both agree that it’s cost effective too. “There’s the initial outlay, but then it’s cheap. Just the food and bedding. really.” Like any other domestic pet – which is what they’ll become. (unless you plan to keep them to eat, in which case you need to be reading about meat birds and dispatching equipment).

Should you have a cockerel? “The cockerel talks to the hens and protects them. He shows them where the food is, calls them over and generally keeps them in order.” But a cockerel is not compulsory. Unfortunately (for cockerels), hens don’t need a noisy male strutting round the place in order for them to lay eggs, unless you want fertile ones – and enjoy that cheery ‘cock-a-doodle-do’ at 4am in the morning.

What you will need…

A Hen House. This can be anything from an old shed or dog kennel, to a top-of-the-range bespoke house, but it must be suitable for the chickens to roost and lay eggs in. Chickens like to perch off the ground when they’re sleeping, but they lay eggs in a cosy nestbox filled with straw. They will probably need a run – especially if they’re left unattended during the day. Foxes are one of the biggest problems and they can appear at any time, not just at night. Your hens will put themselves to bed, but need to be secure.

Food & Water Containers. Ideally these should be suspended off the ground to prevent pests (rats) getting to them. The food should be stored in galvanised bins for the same reason. Make sure the water container is big enough. Hens need lots of drinking water in order to lay eggs, especially in hot weather.

Getting Your Chickens. There are many sources of point-of-lay chickens (a hen that is around 20 weeks old and just about to start laying) from pedigree show birds to ex-battery hens, depending on your budget and your preference. You may want to think about what you want most from them – bantams and purebreds make wonderful docile pets and some are very beautiful (and expensive) but they aren’t the best egg layers and are prone to broodiness (refusing to come out of the nestbox for weeks and being exceedingly grumpy – if you’ve got teenagers this won’t faze you, just turf them out and make life in the nest uncomfortable). Hybrids are bred to be exceedingly reliable at egg production, but aren’t always as child-friendly and approachable as the purebreds.

When you arrive to collect your chickens, bring a roomy cardboard box to put them in – they will be less stressed in a darkened atmosphere. Try not to travel too far with them. Introduce them slowly to their new surroundings and keep them cooped up until they’re familiar with the place they’re roosting and laying in. Within two or three days they will have acclimatised and be happily scratching around, but ex-battery hens will probably take longer to settle in, because they’ve got to learn how to be chickens again. If you are introducing new chickens to an existing flock, proceed with care, as there’s a fierce pecking order in the hen world. It sometimes helps to introduce the new bird(s) at night and then gradually mix them during the day. I’m sure this wouldn’t make it into a chicken husbandry book, but I find that isolating the main bully for a while sometimes works, and giving her a talking to. Then when she’s put back, she’s lost her place in the pecking order.

Going on Holiday. Unless you’re the last person in the vicinity to have chickens, you’ll find a queue of people offering to look after them while you’re away – the eggs are a fine reward for feeding and checking them twice a day.

What can go Wrong? Foxes, as previously mentioned are the worst problem and when they strike it can be devastating, as they tend to go on a killing spree, killing as many chickens as they can and just taking one or two, with the aim of coming back for the rest at their leisure. The run should be fox proof – bury the wire under the ground or electrify it. Another problem can happen in the summer when the weather is warm. Red mite is a tiny blood-sucking creature that crawls onto the chickens at night and ‘feeds’ on them while they’re roosting. The mites can multiply alarmingly in warm weather and can prove difficult to eradicate. They hide in cracks and crevices in the henhouse during the day, so you can use a safe insecticide on them while the chickens are outside. Prevention is far better than cure though, as a severe infestation can kill.

Keeping hens is a straightforward and rewarding activity. I would be lying if I said that it’s completely low maintenance – they are a little messy, need feeding, watering, shutting up and letting out (and can wreak havoc in the garden if left to their own devices – scratching things up and making dustbaths in the borders). But the big advantage they have over other domestic pets is that they lay eggs. A pet that pays rent. Tell that to the hamster. 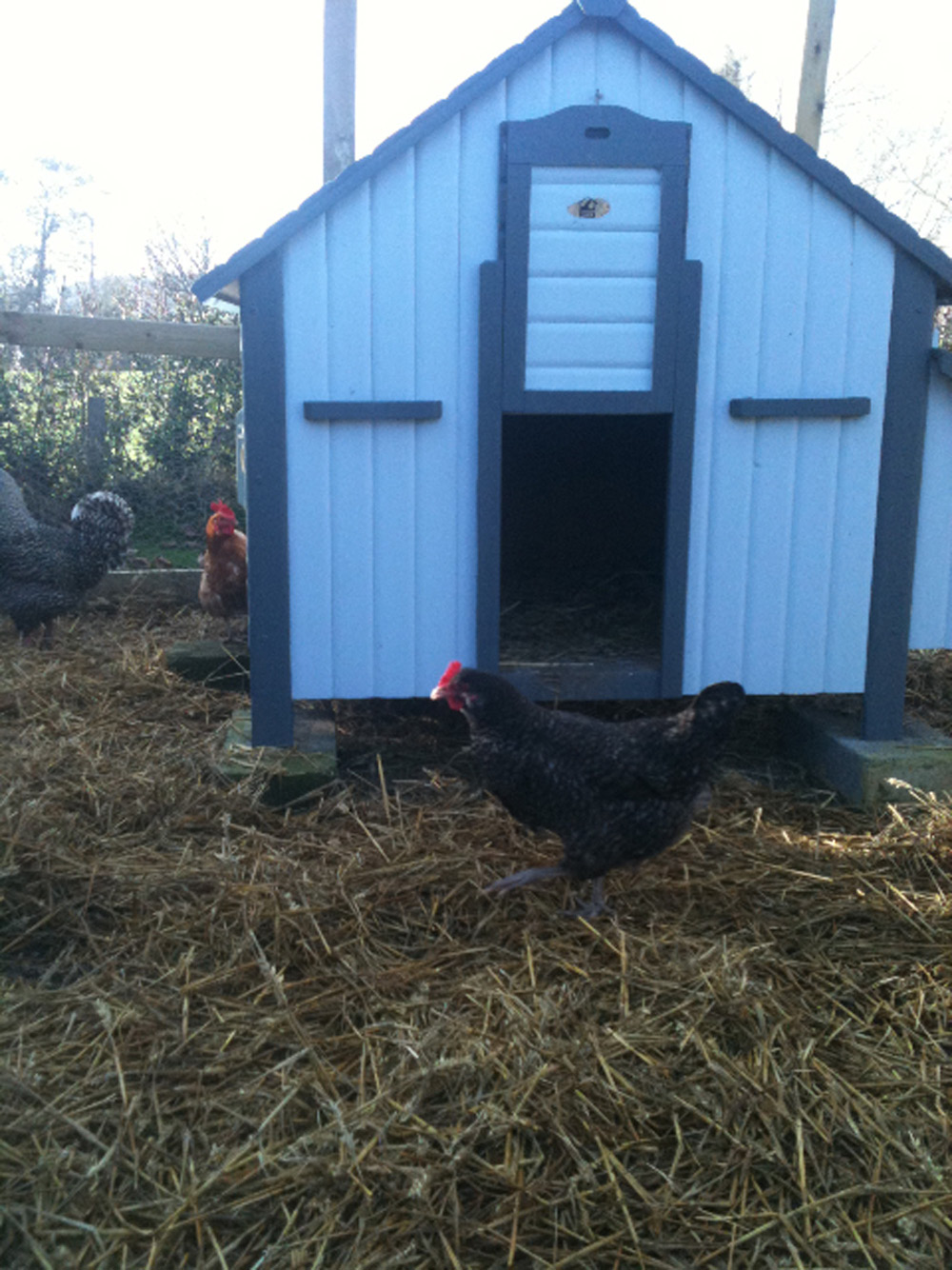 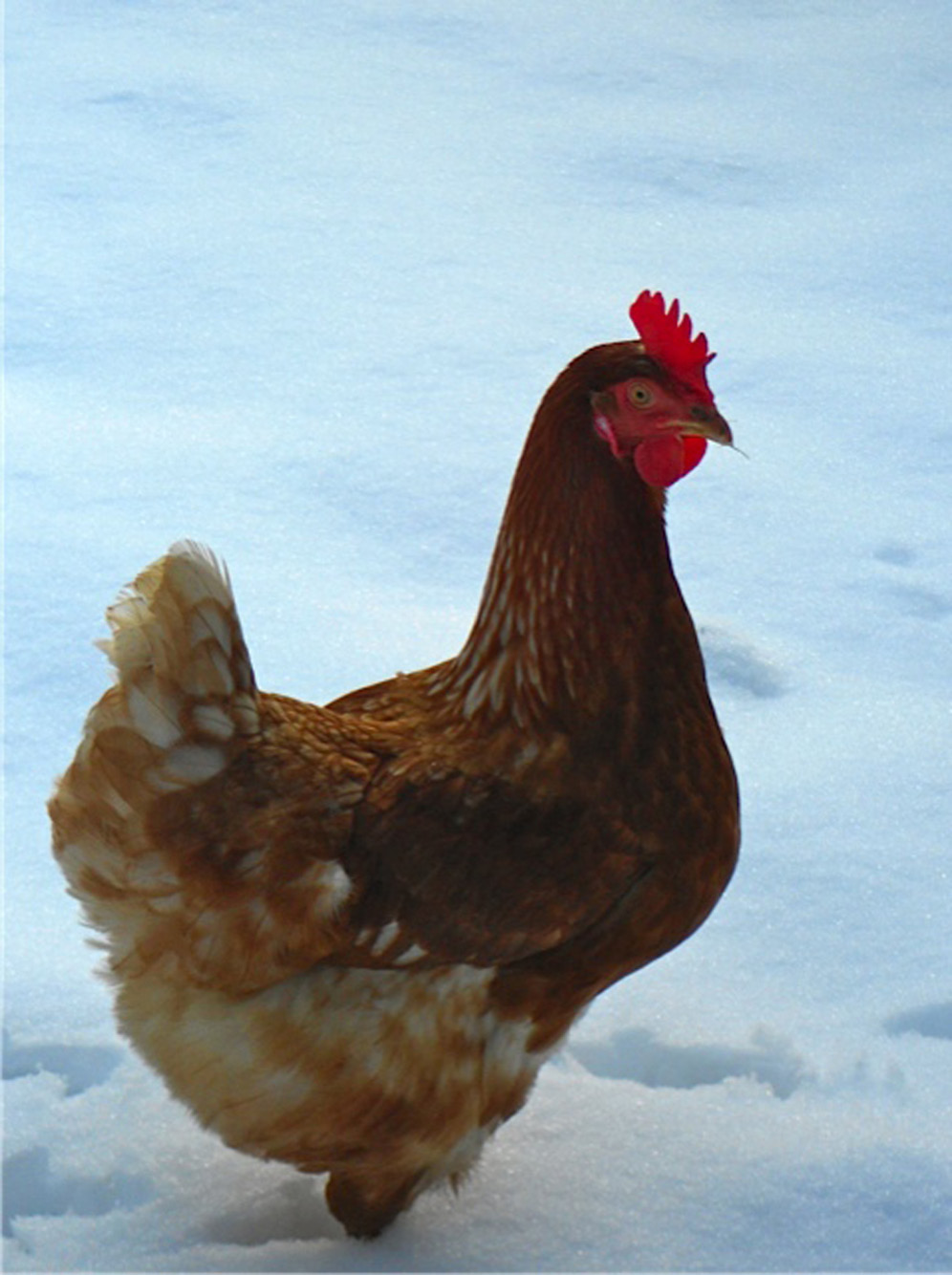 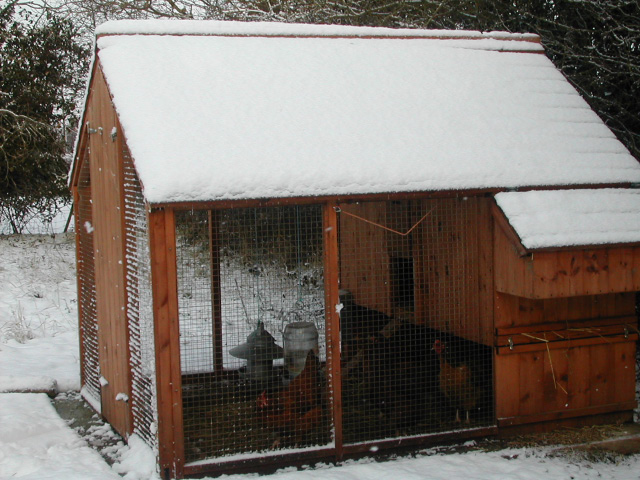 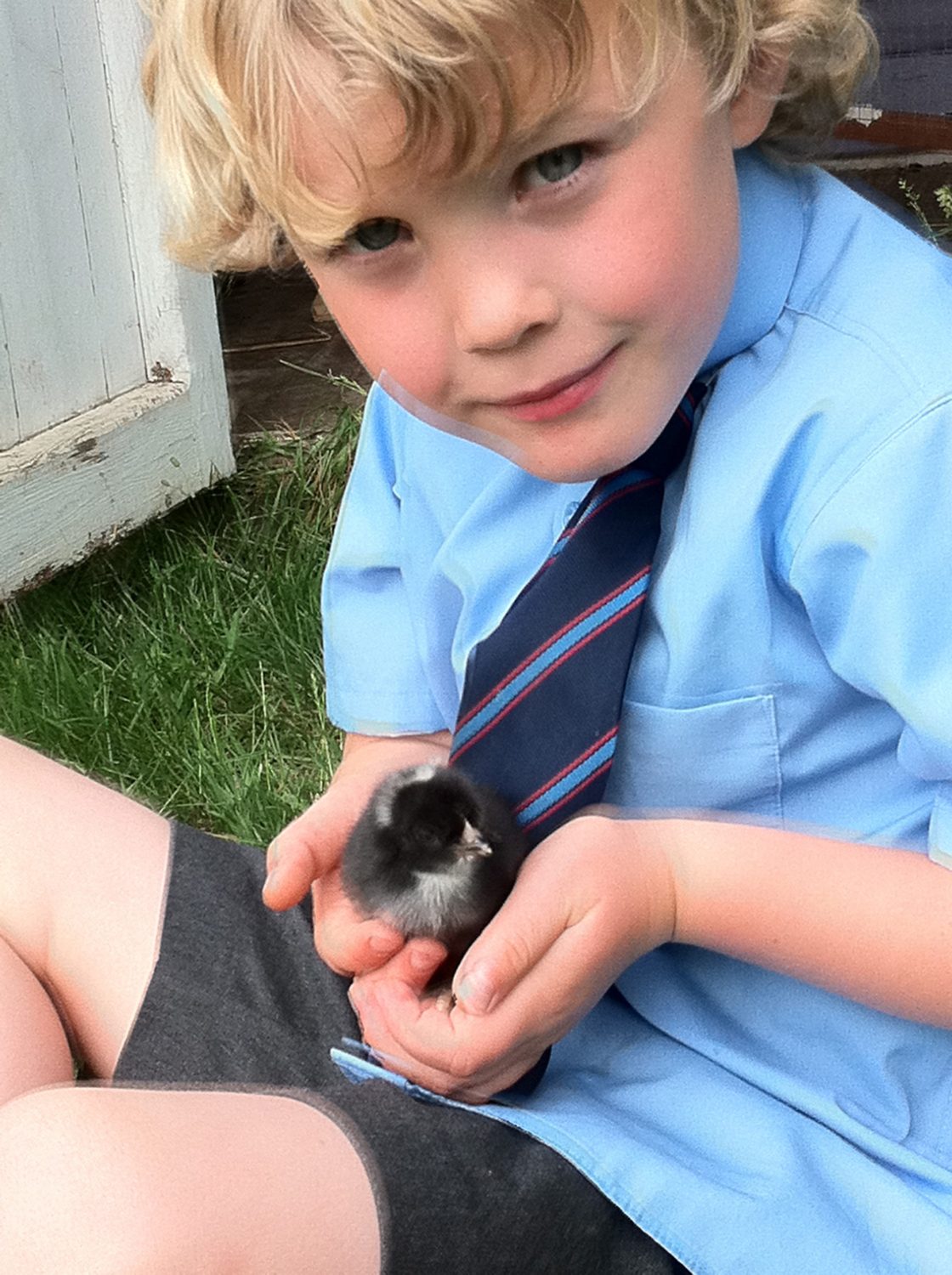 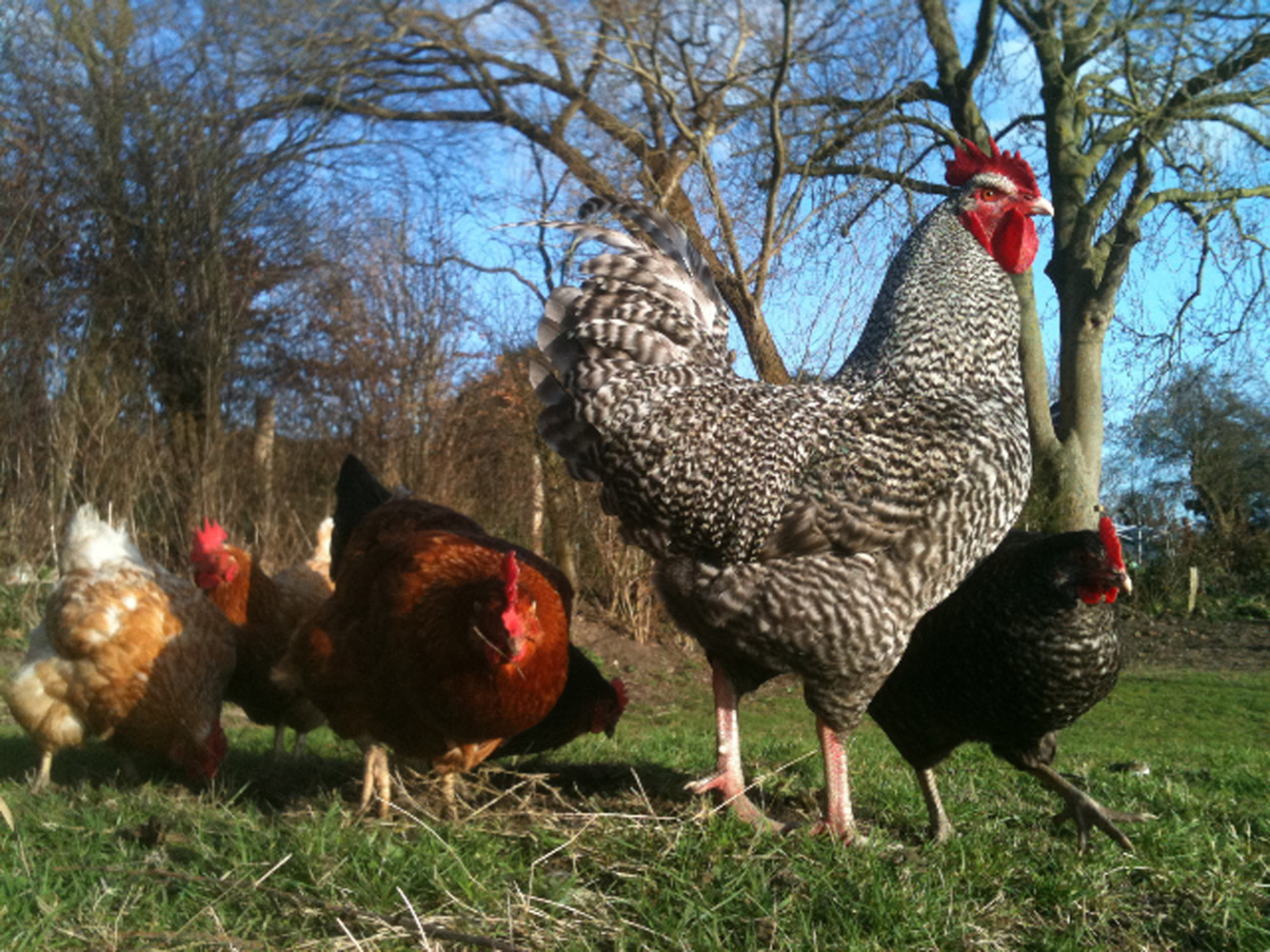