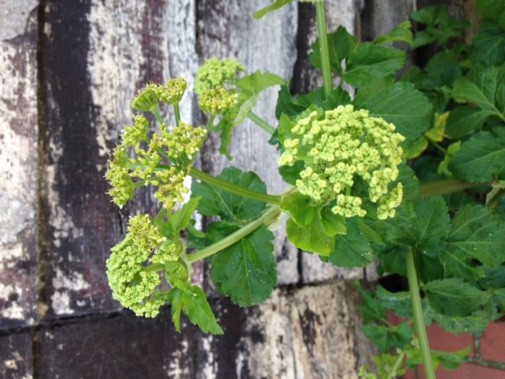 The Chelsea Physic Garden has been tucked behind a wall in the Royal Hospital Road in Chelsea, SW3 since it was founded in 1673. It’s an ancient botanical garden with a unique microclimate due to its proximity to the Thames which enables plants from all over the world to thrive. Newly discovered plants were brought up the river by barge to be delivered to the garden. You can still see the remains of an ancient boat house there.The Physic Garden was founded to train Apothecaries’ apprentices to collect and identify plants from the surrounding area and to study their medicinal uses. 5,000 fascinating plants from all over the world are housed here and the new layout of the extended medicinal plants garden, opened recently, has two ‘rooms’ just devoted to historic British plants. There are also areas containing plants used world wide in modern herbal remedies, modern pharmaceuticals and also those which are being investigated for use in future medicinal roles. If you have an interest in medicinal plants, this is the place to go.Closer to home, hundreds of medicinal plants grow wild in the countryside and hedgerows and the foraging movement is, hopefully, teaching us about these plants and reminding us of the knowledge that our forebears had before the days of the NHS and conventional medicines. Thank goodness for public footpaths which enable us to wander the countryside, albeit in a controlled way, and to have access to their habitat.

I passed a derelict site just off Brixton Hill on Wednesday and noticed, amongst the discarded debris, a wealth of plants doing their own thing and amongst them were several which grow almost everywhere and which we usually try to eradicate. So, medicine for free – although I’m not sure that I’d want to harvest this particular batch bearing in mind the dangerously high level of pollution recorded in Brixton. However, amongst them were nettles, docks, dandelions and elder. It seems to be a good year for dandelions, they are shining away everywhere and I for one am now looking at them in a different light.

Alexanders (Smyrnium olusatrum)
Alexanders were introduced to Britain as a food source by the Romans and they are in full frothy lime green flower now, lining road verges near the sea having a yen as they do for salty conditions. A couple of years ago I decided to try cooking up some stems having read that they tasted a ‘little like celery and a little like parsley’ and found a slightly ropey patch outside the fishmonger’s on the bridge down in Rye. I think they were a little astonished when I went in and asked them if I could borrow a knife! I think I’d left it a bit late as they were a bit stringy but it was worth a try. Alexanders can often be found on the sites of monastery gardens and were both a food source and perhaps used as a medicinal ingredient by the monks. Traditionally, the leaves were heated up and used as a poultice on sores and skin ulcers to help the healing process. Another use was in the treatment of the kidneys and the bladder.

Burdock (Arctium lappa)
The countryside is absolutely full of burdock and you can recognise it by its huge, heart-shaped leaves and its burrs. In its first year you’ll only see a rosette of low growing leaves which can reach about a metre wide on a mature plant. Eventually this develops into a tall plant which has tall, large, purple thistle-like flowers from June onwards. A member of the daisy family, burdock was, and still is, used combined with dandelions to make a cordial and a medicine. Traditional Chinese medicine has used burdock for combating colds and sore throats. It seems that researchers aren’t really convinced as to which of many ingredients in burdock root are responsible for its healing properties but it is known that the plant is full of antioxidants and extract of burdock root is used in homeopathic remedies.

Dandelion (Taraxacum officinale)
The first reference to the use of dandelion medicinally was in the 10th and 11th centuries when physicians in the Middle East discovered some of the plant’s properties. Dandelions are chock full of vitamins including A, B, C, D and K as well as minerals such as iron, potassium and zinc. Think again before you decide to excise them completely from your garden. Perhaps you can harness some of their good qualities instead. Amongst their benefits you can brew up dandelion tea to detox your liver and improve both your stomach health and your skin. Gather some of the younger leaves, blanch them and add them to salads and teas. And it seems that the large quantity of Vitamin K in dandelion is now thought to play a role in limiting neuron damage to the brain (leading to Alzheimer’s disease).

Nettles (Urtica dioica)
The compost heap is full of nettles. Well, they are happiest in highly nitrogenous soils so I suppose that is not surprising but it does mean a good supply of the young nettle tops just yearning to be made into a nutritious soup. Traditionally all parts of the nettle plant were used to treat all manner of conditions including arthritis, anaemia and infections and a benefit to our gardens is that an undisturbed nettle patch is host to young ladybirds in the early part of the year which in turn feed off aphids predating our vegetable gardens.

Self-heal (Prunella vulgaris)
This little plant, a member of the Lamiaceae family, can be found throughout the countryside, on verges, in woodland clearings and in our case, in the lawn which has never been treated with chemicals. It has hooded violet flowers, and an extremely long flowering period – perfect for bees. Self-heal is edible and both the stems and the young leaves can be eaten raw in salads. In folk medicine a poultice of self-heal would have been used to cover wounds, treat irritated skin and as a disinfectant. The list of its chemical compounds is astonishing and it is currently being investigated for its antiviral properties.

Teasel (Dipsacus fullonum)
The teasel has been used in Chinese medicine for centuries but Western herbalists are apparently only now realising its medicinal benefits. It’s a beautiful plant for its pure architectural structure and its ripening seed heads are magnets for finches and bees. Now it is being used against conditions such as ME and Lyme disease as well as joint and tendon problems, muscle pain and inflammation. It’s lovely to see it growing freely down by the sea at Rye Harbour and being of benefit to the wildlife at the Nature Reserve. It is an extraordinarily rampant self-seeder but keep some at the back of your borders or in a wild patch of the garden. The birds will thank you.