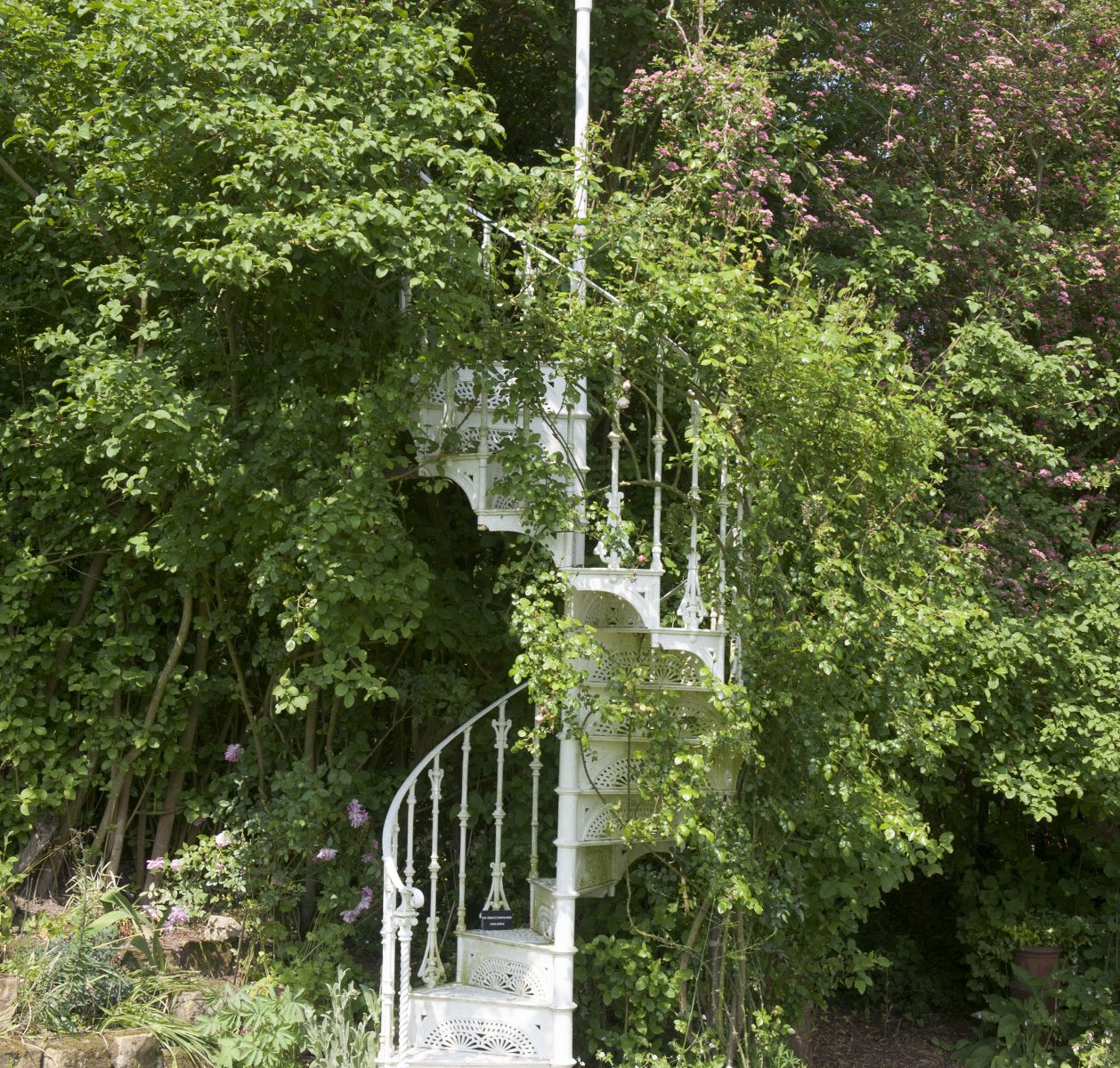 Five years ago, at the beginning of what proved to be a life changing journey through the Kimberleys in Western Australia, we arrived in the old pearling town of Broome just at the right moment. For a few days every month from March to October, and with the optimum conditions of a very low tide and a full moon, there is a natural phenomenon called the ‘Staircase to the Moon’ when a golden path rises from the mudflats to the moon. But closer to home and in the tiny village of Chainhurst in the parish of Marden, Kent, the Mercys have created their own ‘Stairway to Heaven’ in their piece of paradise, a garden developed over a period of forty years. They have a glorious ornate Victorian spiral staircase which leads up to a tree top walk, inspired by one seen and remembered many years ago in the Bois de Boulogne.

Bought at auction as a disused triple kiln oast in 1965, Whitehurst has been a family home and a long labour of love for a most imaginative and creative couple for many years. The heavens opened with a vengeance on the day I visited but despite that little setback the garden proved to be an enchanted place.

Opened for the National Gardens Scheme for twenty-one years, Whitehurst has been the venue for many charitable events. Many years ago I was sent an article written by Vanessa Berridge about this very place which I foolishly filed away meaning to visit on one of the NGS days but I hadn’t quite got there until this month. How I wish I had seen the garden sooner and followed its progress to its present state.

The land that was bought with the derelict oast is heavy clay and was a cornfield when the Mercys bought it. Hops hadn’t been grown on the farm for about eight years. They continued to live in Staplehurst for the first couple of years whilst working to make the house habitable and moved in in 1967. They immediately bought one thousand hedging plants for sixpence each and five hundred lawsons and five hundred beech – yew being too expensive at six shillings each. They also bought a hundred saplings and had a tree planting party.

Materials for the house were gathered from demolition sites – the Georgian windows which look out to the garden are some of the thirty that were bought in Canterbury and the wood for the floors of the oast came from prefabs gifted by the Canadians during the war. After the initial hedge and tree planting the garden looked after itself for a while whilst the family was young and Mr. Mercy worked at his dental practice in nearby Staplehurst.

One of the first things that were created were a series of five ponds connected by a rill. These were dug at different times and the rill itself was named Hadley Rill in honour of the place where Apollo 15 landed on the moon in 1969. They remember listening to the details of the landing, which was the fourth manned mission to the moon, on their transistor radio whilst they worked.

The ponds are now a wonderful feature of the garden and one in particular is what Mrs. Mercy calls an ‘adult playground’, as a huge willow which fell during the 1987 storm has now become a means of walking over the water. After the storm they took the ‘head’ off the tree and left the trunk as it was, on its side. The trunk was flattened to create a path and in due course the willow sprouted. It now looks wonderful as if it was intended to grow in this way. The 1987 storm took down forty trees at Whitehurst and disastrously three thousand Kent peg tiles came off the roof. However, many of these have been used in the garden – a particular feature being those under the black mulberry which was propped up after the storm and which is now quite a size.

In 1986 John had a stroke which left him without the use of his left side – he had to learn to write again using his right hand, being left-handed. He could no longer practise as a dentist but intensive physiotherapy and determination meant that within a year he was able to drive again and wield a wheelbarrow counterbalancing with a rake. He began to work on the garden in earnest and never looked back. Plants arrived as cuttings and swaps between friends.

A small courtyard directly opposite the back door contains a Victorian replica of an ornate fountain in the Court of Lions in the Alhambra gardens and behind it, sitting quietly on a bench reading a book, is a modern Martin Duffy bronze of a young girl. There are clay pots of succulents here, great ferns and very much an air of calm.

Memories of tea taken in the roof garden at Derry and Toms in Kensington High Street, and its formal rose garden, led to the laying out of a rose garden edged with dianthus, with a particular feature being a dramatic Victorian marble font, and the garden shed, with its paved area, has a green roof watered by bath water filtered from the house.

I liked the way clay pots have been stacked on shelves in this courtyard. In the vegetable garden is a pot containing a precious Wollemi pine given as a present by his family on John’s birthday.

The mounds created by the excavations for the ponds have now become rockeries and flower beds and one mound is home to a little furnished bothy with a hollowed out tree trunk as a chimney. You can climb up steps behind the bothy to be greeted by double pink poppies and a happy tangle of vegetation. Fragrant rambling roses and honeysuckles grow in great profusion and a family of Great Tits have been happily nesting in the bothy chimney.

A friend, Chris, has built the ragstone wall round the garden with 110 tons of stone coming from the quarry at nearby Hermitage Lane. It has holes in it for nesting birds, steps to climb up to see over to the views beyond and it gives the garden a feeling of protection and enclosure.

But to my mind the most wonderful feature of the garden is the tree walk, accessed by the spiral staircase, where you find yourself high above the garden in amongst the leaves and limbs of what are now mature trees. The hanging swathes of Russian vine give the impression of lianas in a South American rainforest. Rosa ‘New Dawn’ climbs up the side of the staircase and in mid summer creates a fragrant carpet of pink petals below.

Stones in the rockery beneath the staircase are thought to have come originally from a demolished ecclesiastical building in Brighton and were spotted by John in Staplehurst. Once he had negotiated a price for them he would bring them home in his open car, one in the morning and one in the evening.

The plants and trees at Whitehurst have been allowed to grow at their own pace without too much interference and the Mercys’ philosophy is that if a plant is happy in its conditions it will grow. Their description of ‘happy and haphazard’ when describing their garden doesn’t really do their handiwork justice. It is a magical creation. 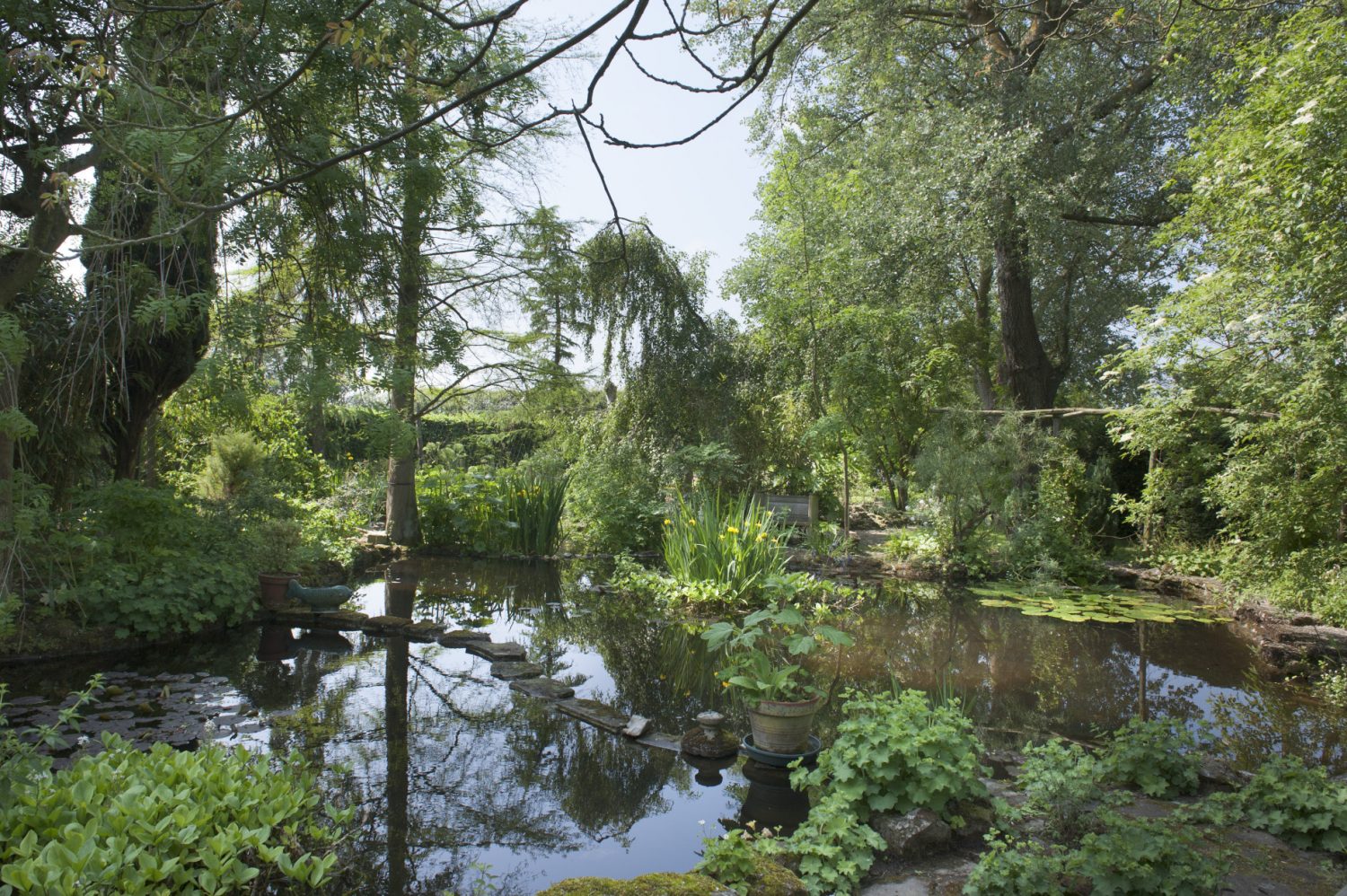 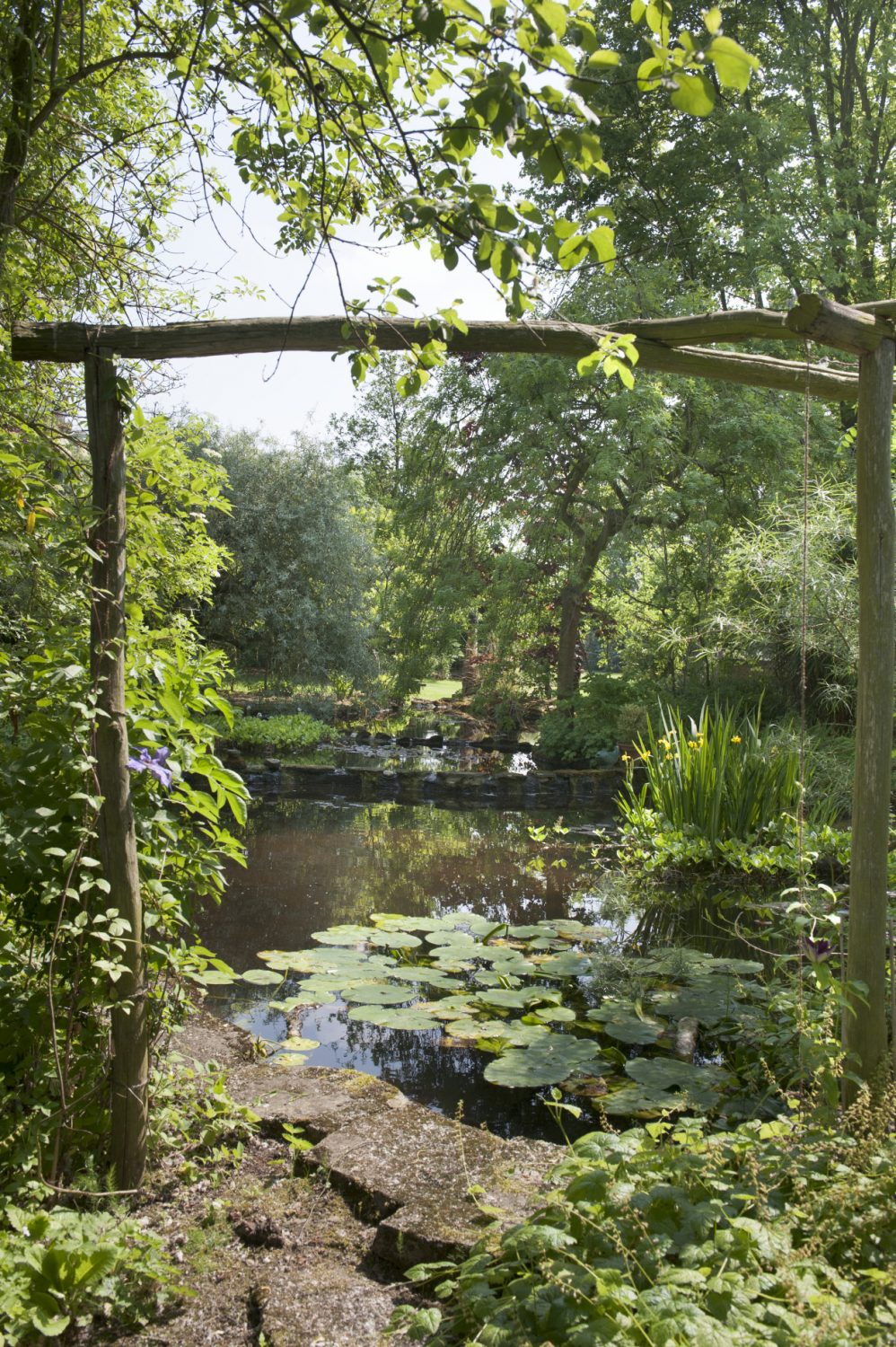 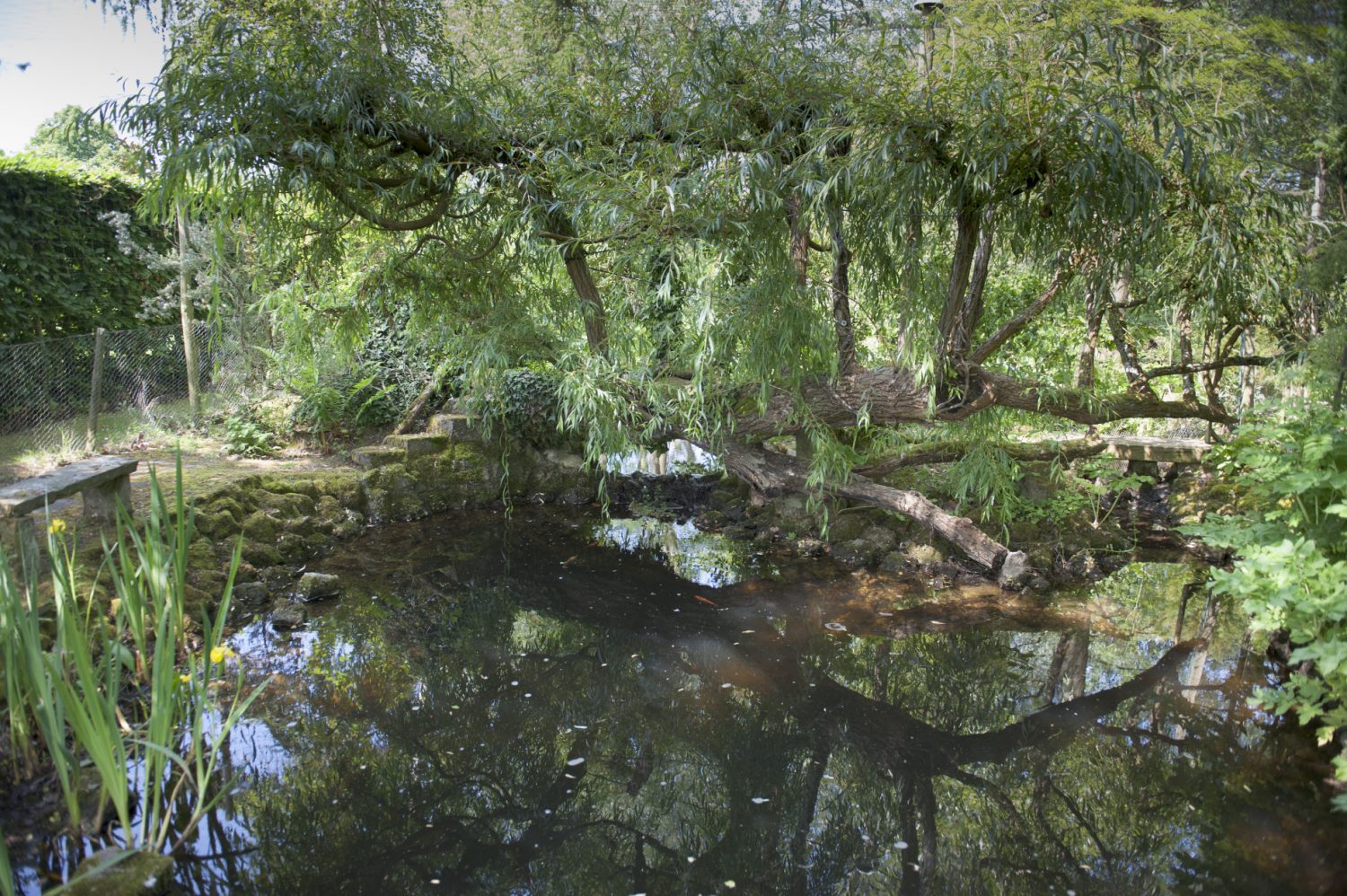 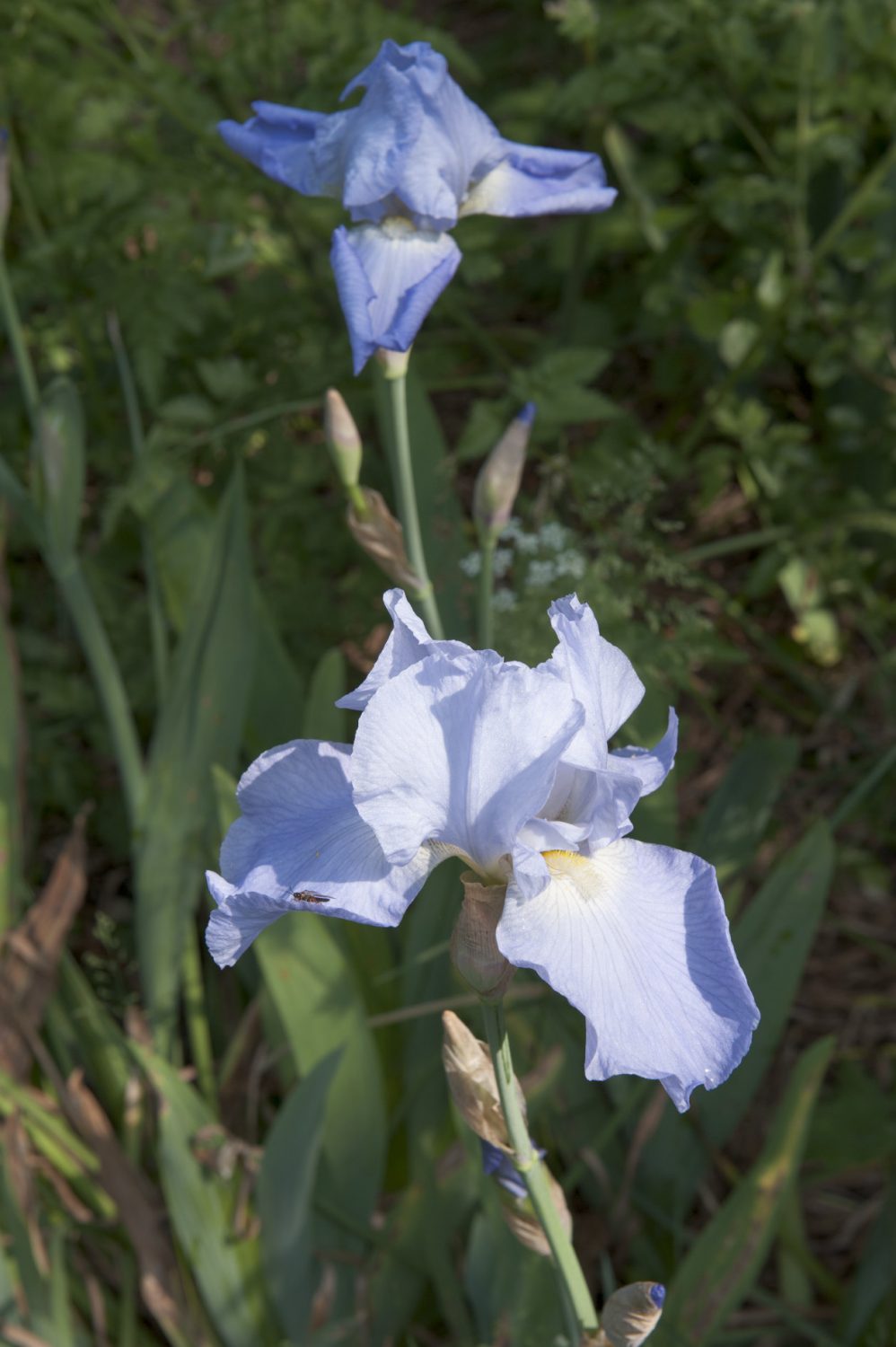 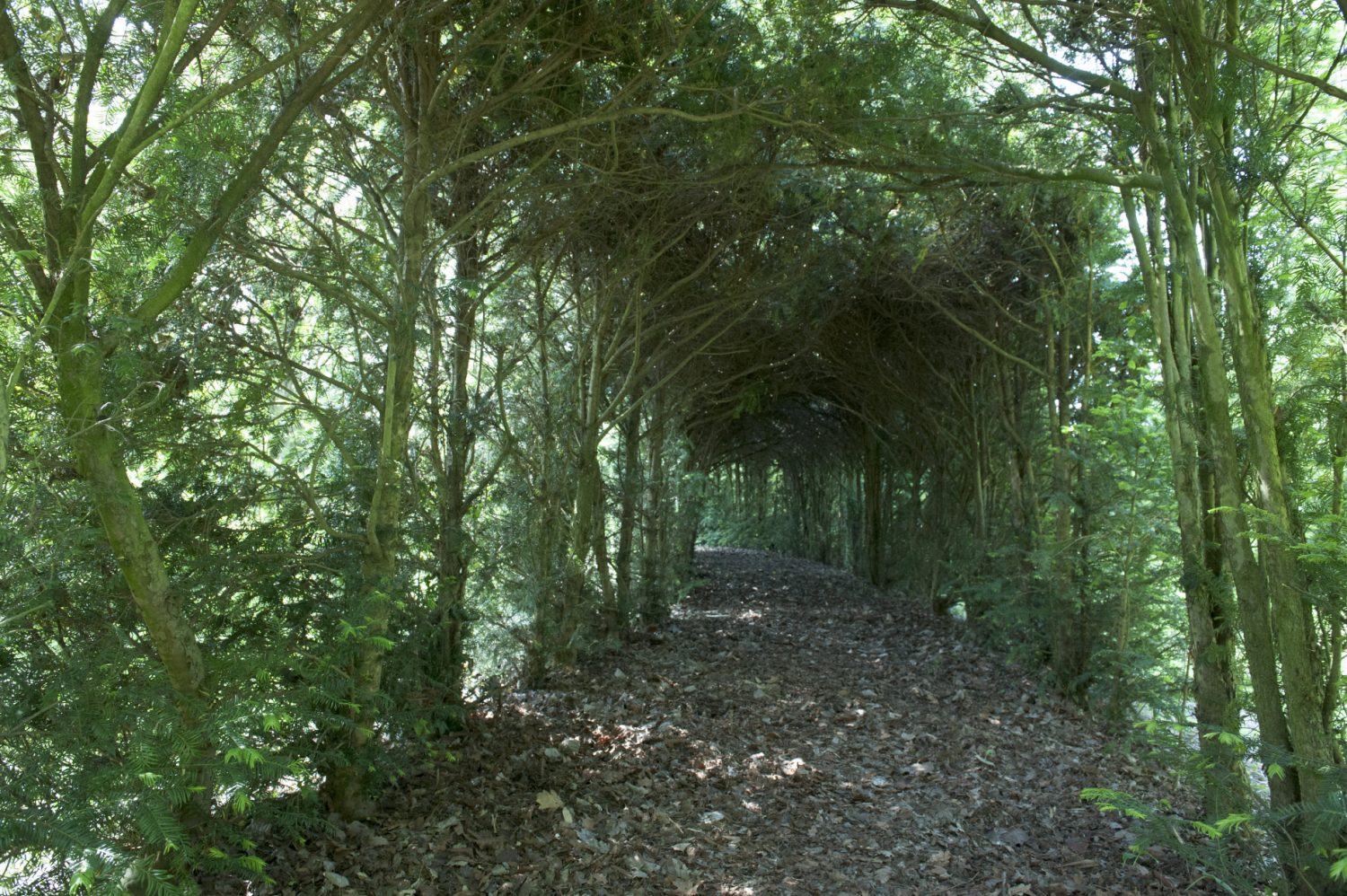 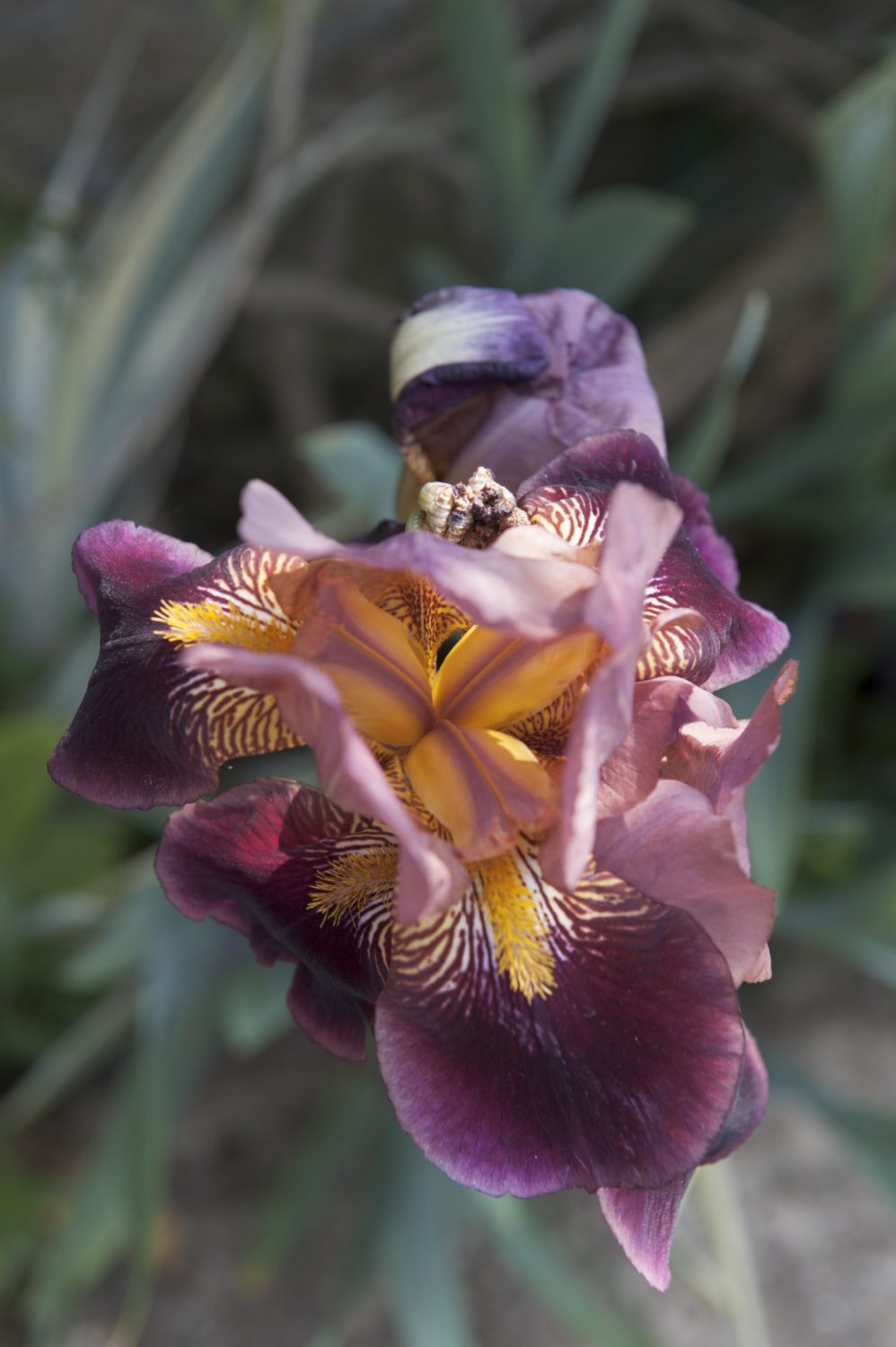 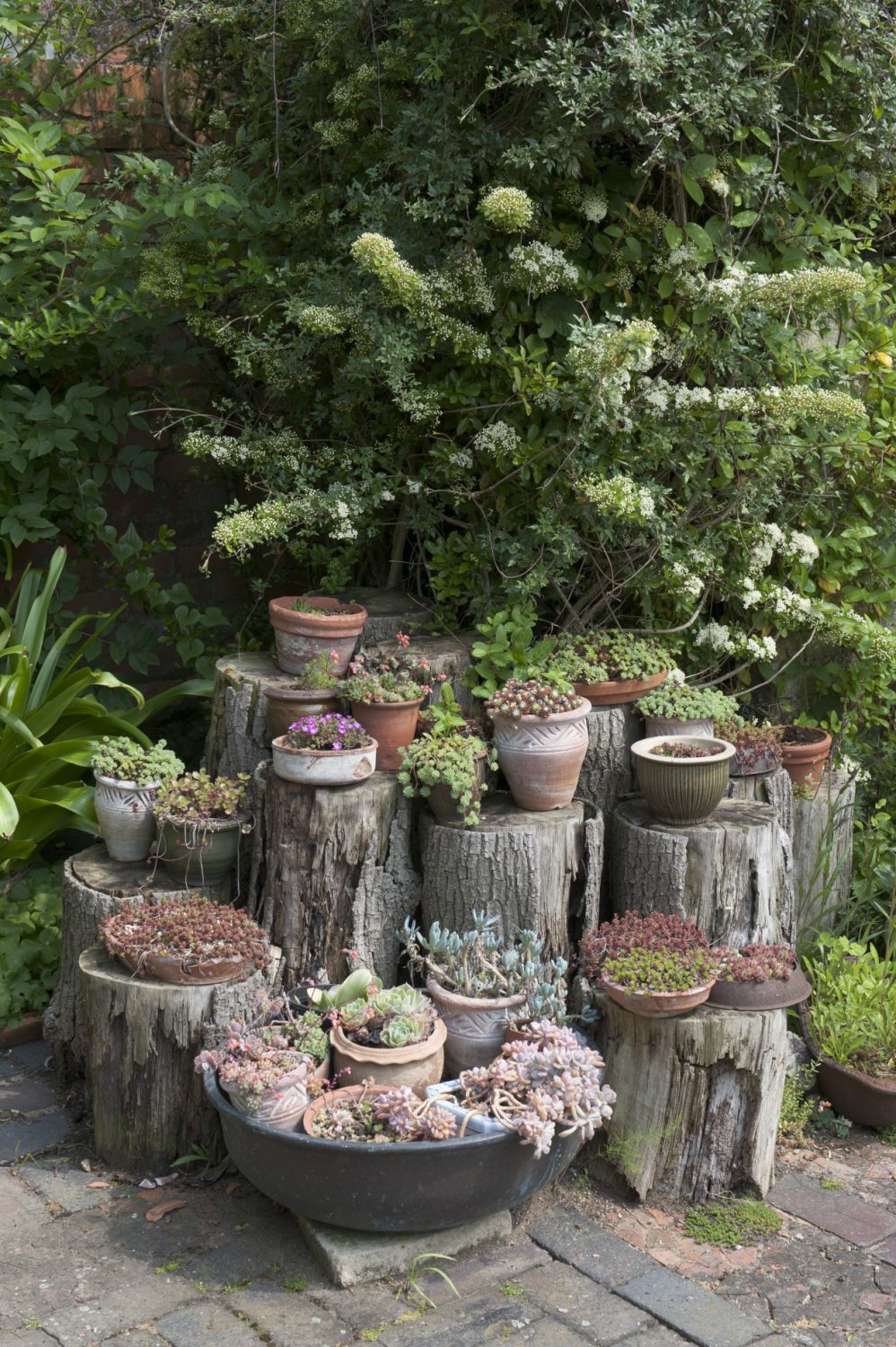 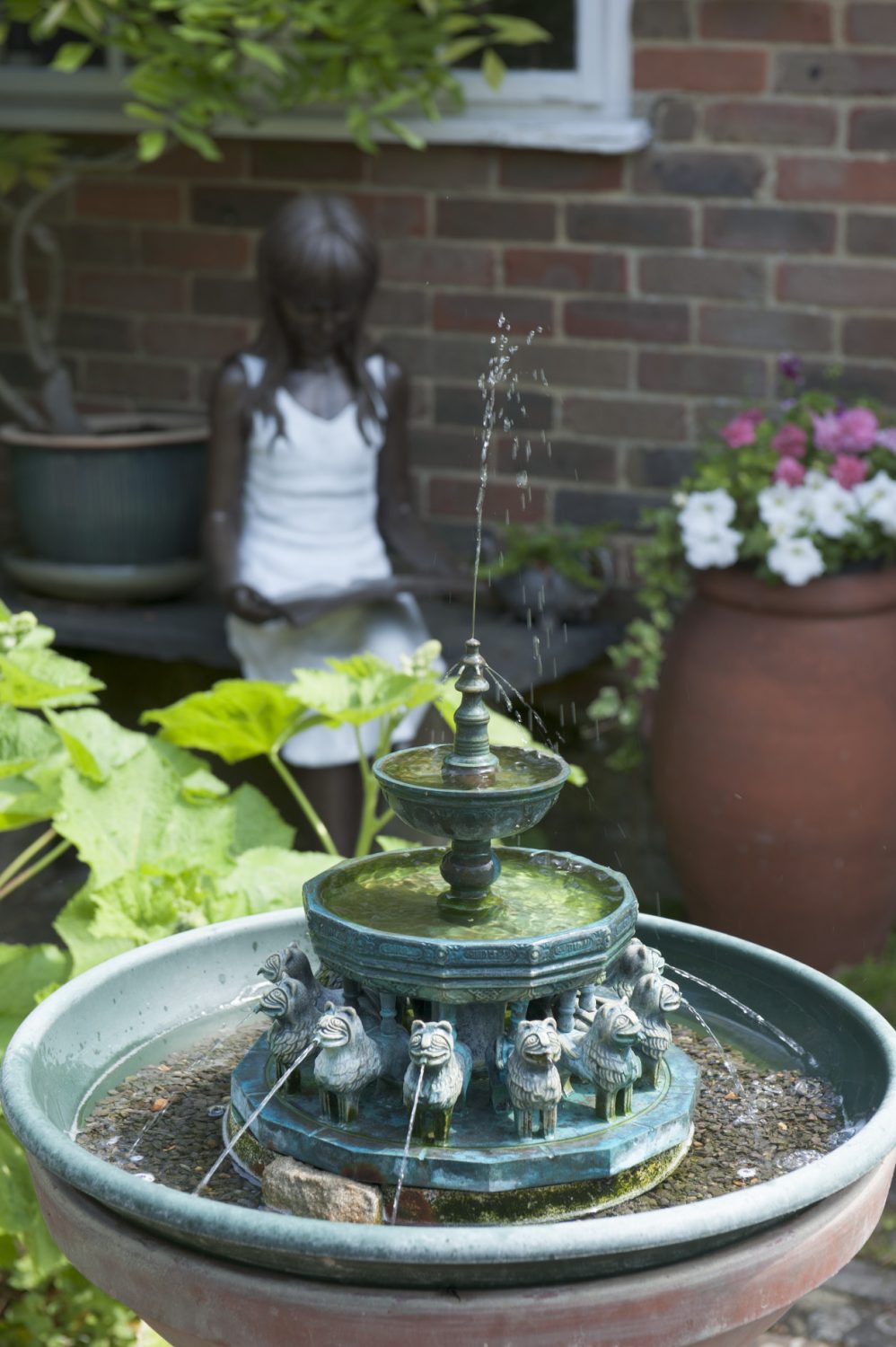