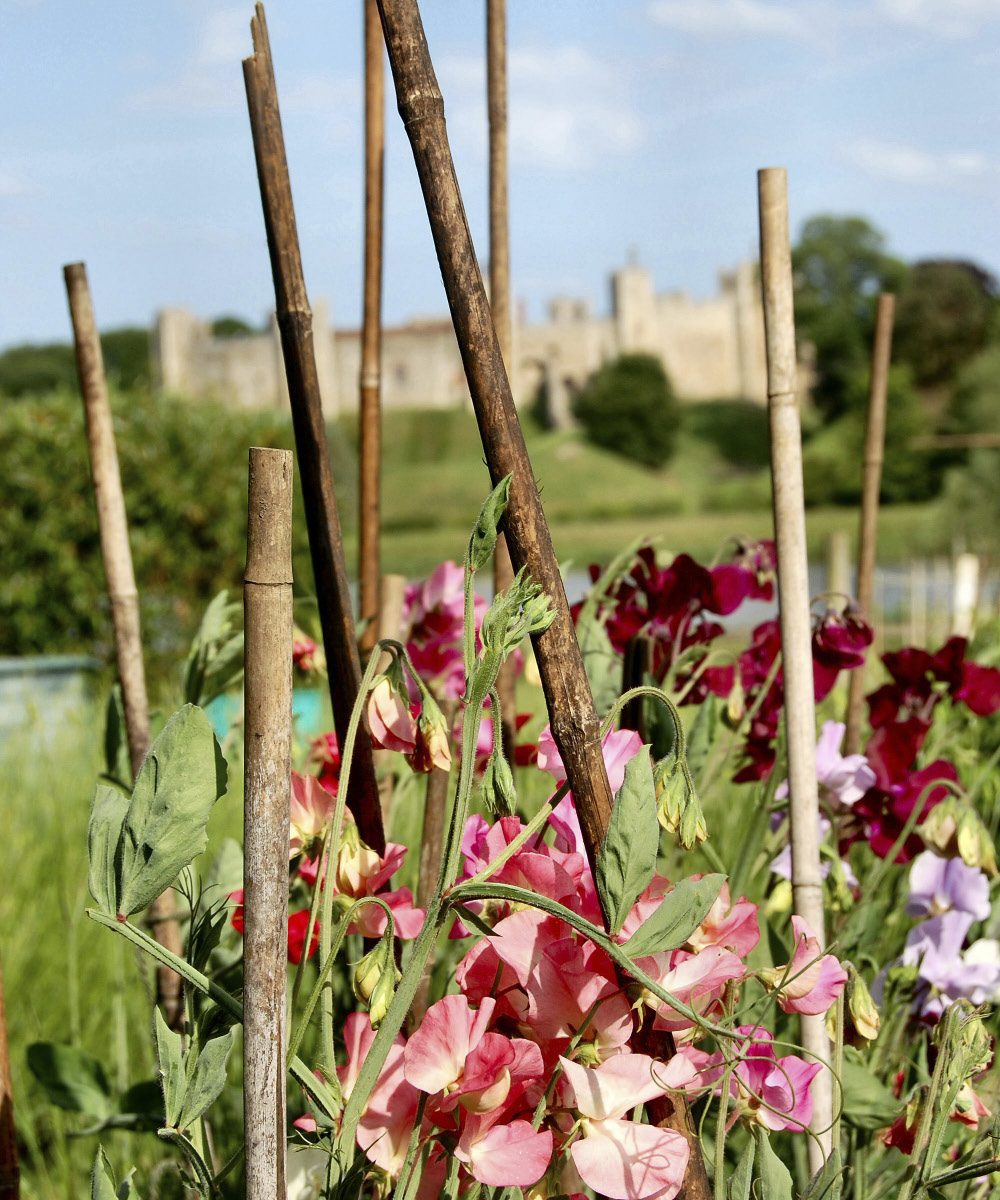 There is an old jug full of greenery on the kitchen table at the moment – there because we had a young couple in for B&B over the New Year and I thought that some greenery would brighten up the kitchen while the days are so dark. I rushed round the garden in the rain and picked a few sprigs of Viburnum tinus, some variegated box and some Vinca major – the white form – in bloom at the end of December. The scent of the viburnum has been intoxicating and it reminded me to at least think about ordering sweet pea seeds for this year.

I’ve never been very successful with planting in the autumn, although evidence has it that doing this produces more robust plants. No matter, there is plenty of time, with March being a bit of a cut-off date. I must say that, as with parsley, some people have the knack of growing sweet peas. My son, who is a professional gardener, grows wondrous columns of them in his vegetable patch and, when asked for a few tips, just says: compost, more compost and compost.

Surely, the sweet pea, Lathyrus odoratus, must be one of the world’s most famous flowers – but their origins are a little mysterious. It is certainly true that in 1699 a Sicilian monk, Father Cupani, sent seeds of sweet peas growing wild on Sicily to various plantsmen around the world. Some were received by a Dr Uvedale who developed a few new forms but, by the late eighteenth century, there were still only five or so varieties known, including L.o. ‘Cupani’, the wild form, and L.o. ‘Painted Lady’ which has a two-toned, red and white flower and a particularly scrumptious scent. However, once Henry Eckford – a retired gardener – set up a nursery at Wem in Shropshire in the 1880s and began to create different sweet peas from the original varieties, things began to take off in the world of sweet peas. His creations became known as the Grandiflora group and combined a wider range of colours, larger flowers and plenty of scent, and included treasures like L.o. ‘Lord Nelson’, a dark navy blue and the very vigorous L.o. ‘Senator’, described as a ‘flake’ with creamy/chocolate-maroon flowers.

By the turn of the 20th century, Silas Cole, a gardener working on the Spencers’ estate at Althorp, not only grew Eckford’s creations but successfully bred sweet peas with even larger flowers and frilled petals, thus creating the Spencer sweet peas. Hugely popular in the 1920s and 1930s and madly flamboyant were the ‘stripes’, which have a ‘picotee edge’ – with a darker colour around the edge of the petal. These are all the rage again and I’m determined to grow L.o. ‘Wiltshire Ripple’ this year – with chocolate, maroon and deep pink markings on a white background.

Now, of course, sweet pea breeding has gone in every direction, with the best attributes of the Old Fashioned Grandiflora sweet peas and the Spencer types being thrown into the mix. Modern Grandifloras have long stems, large beautifully textured flowers and the intoxicating scent of the early ‘wild’ forms. However, I have to say that I think that some of the smaller-flowered, very prolific sweet peas are more endearing in many ways, although the exhibition-quality flowers produced at shows like RHS Chelsea are absolutely astounding, with companies like Matthewman’s of Yorkshire demonstrating the magnificent results of 40 years of plant-breeding.

For us lesser mortals, some preparation of the site is useful, if not essential, as sweet peas are greedy eaters and well-rotted organic material added to a planting trench along with some torn-up newspaper (if your soil is free-draining) is going to give your plants a good start. Shredded comfrey leaves in the trench help too and, later on, as the plants take off, feeding them with comfrey pellets will help development. As they grow on, use a potash-rich feed to encourage flower growth.

Before this, and unless you are buying-in seedlings, you will need to plant your seeds. Pop a couple of seeds in each growing tube: root-trainers are great for sweet peas as they can accommodate the long root system they develop – as can cardboard loo rolls, although these are sometimes not long enough. Push the seeds in about an inch below the surface, two to a tube. Use a good multipurpose compost and don’t think about planting them out until their roots fill the growing tube. Pinch out the plants, removing the growing tip, once they reach about six inches high, so that they don’t waste valuable time growing straight on up but have a chance to plump out a bit. Sweet pea seeds are quite slow to germinate and need checking regularly but they should show signs of life within a week or two. Mice love these plump little seeds so you may have to resort to the dreaded poison, traps or some other means of deterrent. Cover your seed trays with newspaper to keep the moisture in but the light out. Once you have planted your seedlings out, you now have to think about slugs. A thick layer of sharp sand is a good idea, as are a few slug pellets. Once your plants start flowering, pick the flowers every other day to keep them producing fresh blooms. If all this sounds like hard work, it isn’t really – and what can be more gorgeous than a bowlful of sweet peas on that kitchen table? 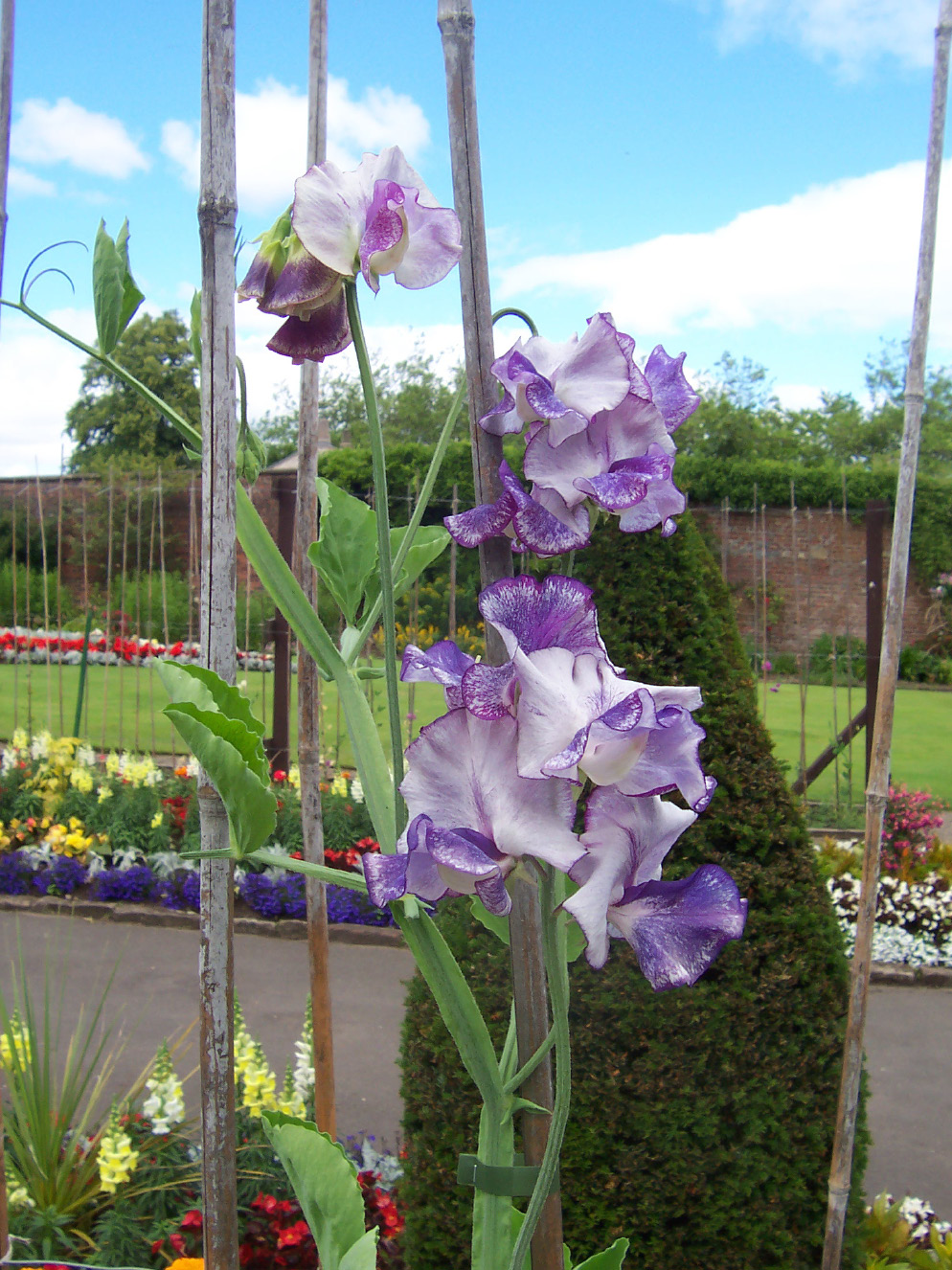 Surely, the sweet pea, Lathyrus odoratus, must be one of the world’s most famous flowers