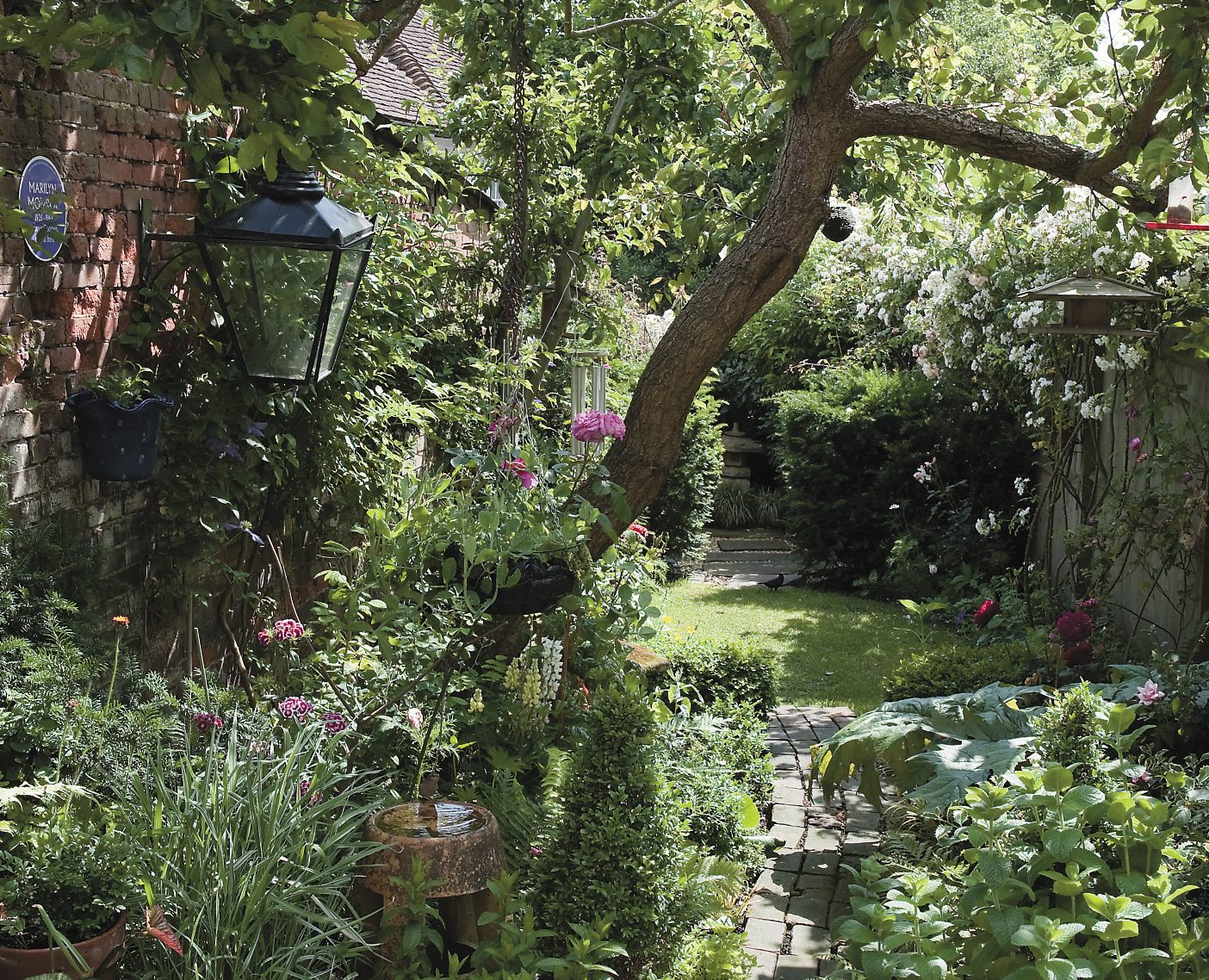 The courtyard gardens at the Chelsea Flower Show this year were, as usual, incredibly popular with the public. Once the Show was in full swing it was hard to get near them to admire the sheer ingenuity, imagination and love of plants that goes into each creation. There was a particularly theatrical and quite exquisite Fenland Alchemist’s Garden fronted by a particularly glorious old post and rail fence. Roger Giles, whose Cambridgeshire based company built the garden, told me that he’d had it for years and that it had come from Newchurch down on the Romney Marsh in the days when he worked as a sheep shearer. So, a Fenland garden with Kent connections. These gardens show what you can do in really very small spaces and whilst we don’t all necessarily have the knowledge and skills of the designers showing at Chelsea, I think we can all put our stamp on a small outside space and create something we are happy with.

We’ve all got different ideas as to what we want of a small garden, whether it is as a place to relax in after work with minimum maintenance or a place to make a collection of our favourite plants, or perhaps to grow a few edible crops, but basically to enjoy in our own way. It’s so interesting to see how we all have our different ideas and how creative they can be.

I was lucky enough to see two small gardens in Cranbrook this week, both of which are south facing and are behind fascinating old houses. The first was the garden of a sixteenth-century weaver’s house fronting on to Stone Street. This garden with its pergola of Mediterranean blue and its pots and containers full of herbs and edible crops, is totally low maintenance and predominantly used by its owners as a remarkably tranquil retreat to relax and entertain friends in.

The second garden is the creation of Bob Truman, formerly Principal Cellist at Covent Garden. Born in Greenwich, Sydney, Bob cites his grandmother as being his main gardening inspiration. Her Sydney garden, which was flanked by deep borders of freesias, was where she taught him the rudiments of gardening at the great age of five and where, when arthritis made it difficult for her to reach the back of her borders, he, under instruction from her, would help her with her gardening. He now grows Rosa ‘Cecile Brunner’ outside his kitchen door to remind himself of her.

Bob lives in what was a hatter’s factory. The land was bought in 1775 for £40 by one John Tooth and the business was owned by four members of the Tooth family. When Bob first saw the old factory it was inhabitable but in much need of love and attention. After months spent camping on the top floor (where there are marvellous views over the roof tops to the windmill), he has now completed the restoration of this splendid building.

The house itself is down a narrow alleyway leading off Stone Street and used by people walking through from the Tanyard car park. When Bob first started container gardening down the alleyway he constantly had people vandalising his pots and at one stage actually had his door kicked in. Undaunted, he persisted; more pots arrived and were filled with all manner of plants. He feels now that they seem to have had a civilising effect and they are certainly much appreciated by people using the alleyway which I discovered when I was standing outside his house. Several appreciative comments were made in a couple of minutes! His neighbour on the other side of the alley, also a keen gardener, has created a cottage garden out of a tiny strip of ground at the bottom of the alleyway as well as clothing her fence with all manner of containers full of colour and she, as well as the proprietor of the shop at the top of the alley and Bob himself, call themselves the Mad Hatters’ (Gardening) Group.

Bob’s garden itself is dominated by a gnarled old apricot tree under which he cleared out old bricks and stones when he started on the garden. He took advice from Alexis Datta, Head Gardener at Sissinghurst, recently and last winter the tree was given a good prune to improve its longevity and vitality – and this year it’s fruiting. A brick path, laid in old bricks retrieved from a skip, leads down from a small terrace full of pots to a garden full of some of Bob’s favourite plants. He’s collected roses such as R. ‘Rambling Rector’, which is in full bloom in June, growing with R. ‘Seagull’ and threaded through with the delicate pink of the old rose, R. ‘Adelaide d’Orleans’. He has chosen the striped hybrid perpetual, R. ‘Ferdinand Pichard’ for its strong scent and large-flowered clematis like C. ‘Lasursten’ and C. ‘Mr. President’ which he thought was appropriate for a gardener with his surname! There are also pots of a particularly striking deep purple morning glory, Ipomoea ‘Grandpa Otts’ which he used to plant out in the alleyway but which was frequently uprooted. Bob has collected ephemera from Portobello Road market over the years and I particularly loved the huge lanterns on either side of his garden in which he has candles burning in the evenings and in particular in the winter. Structure is created with box and yew hedging, the yew planted as soon as he started creating the garden in 2005. The huge palmate leaves of the decorative rhubarb, Rheum palmatum create dramatic interest in the border to the right. Beyond the yew was a sort of no-man’s-land at the bottom of the garden full of tangled weeds and nettles, but with the agreement of the local council Bob took this small space over some time ago and has now created a tiny green Japanese meditative garden. He loves small gardens because, as he says, you can use vertical space as well and his fences and the front of his house are hosts to any number of containers overflowing with plants. His hanging baskets are filled for him by The Cottage Garden in Staplehurst and last year his window boxes on the third floor were home to a family of rather noisy collared doves. I met one of the offspring, Esmeralda, on my visit. She is now nesting in the R. ‘Rambling Rector’ which is overflowing from the garden into the alleyway. The garden is a haven for birds and Bob recommends feeding them throughout the year and has been rewarded with at least fourteen visiting varieties of birds including goldfinches, long-tailed tits and siskins and, of course, Esmeralda. 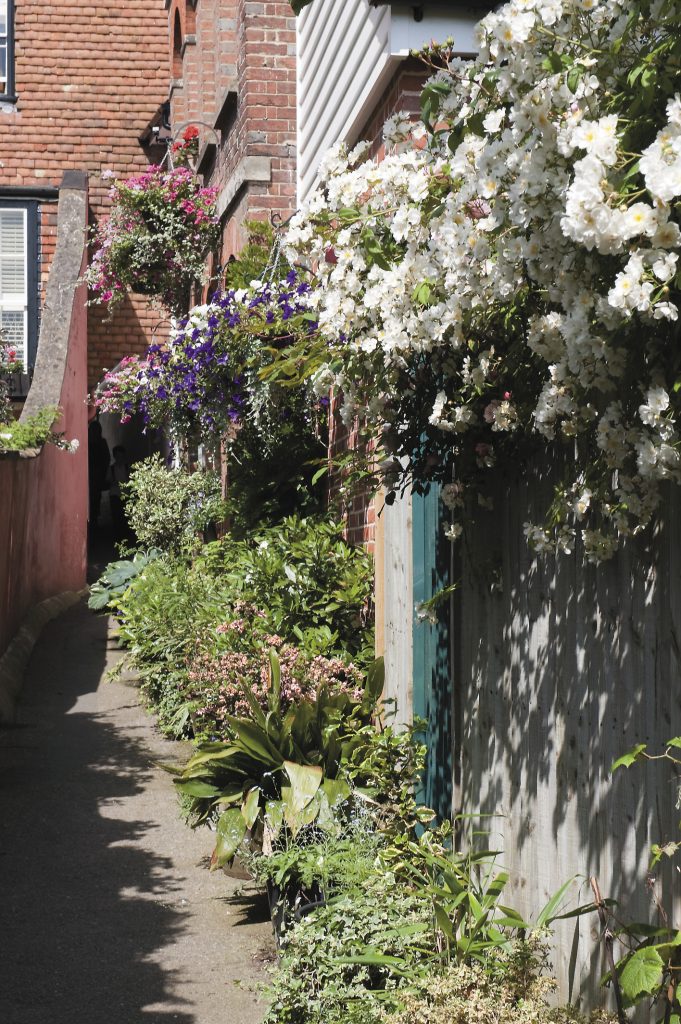 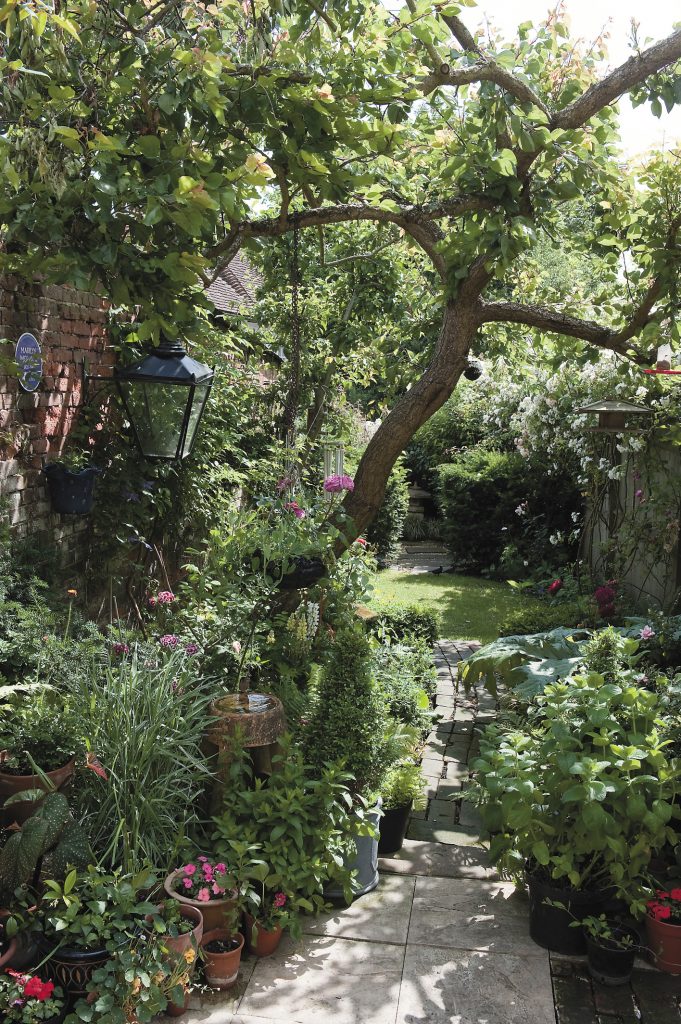 A brick path, laid in old bricks, leads down from a small terrace full of pots to a garden full of some of Bob’s favourite plants 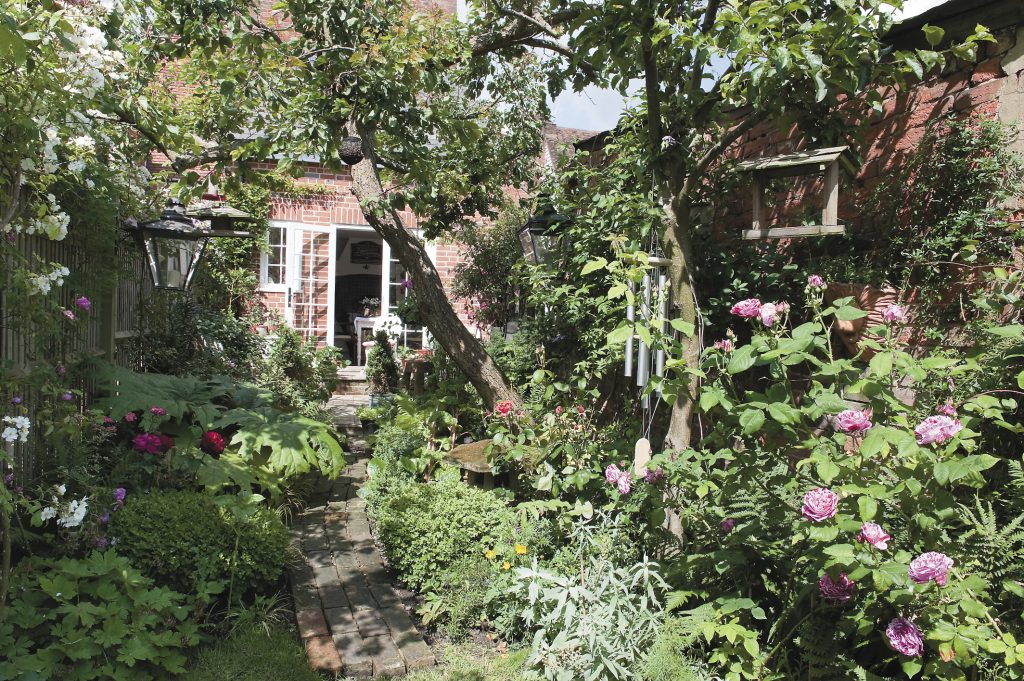 the apricot tree at Hatters Cottage is bearing fruit this summer 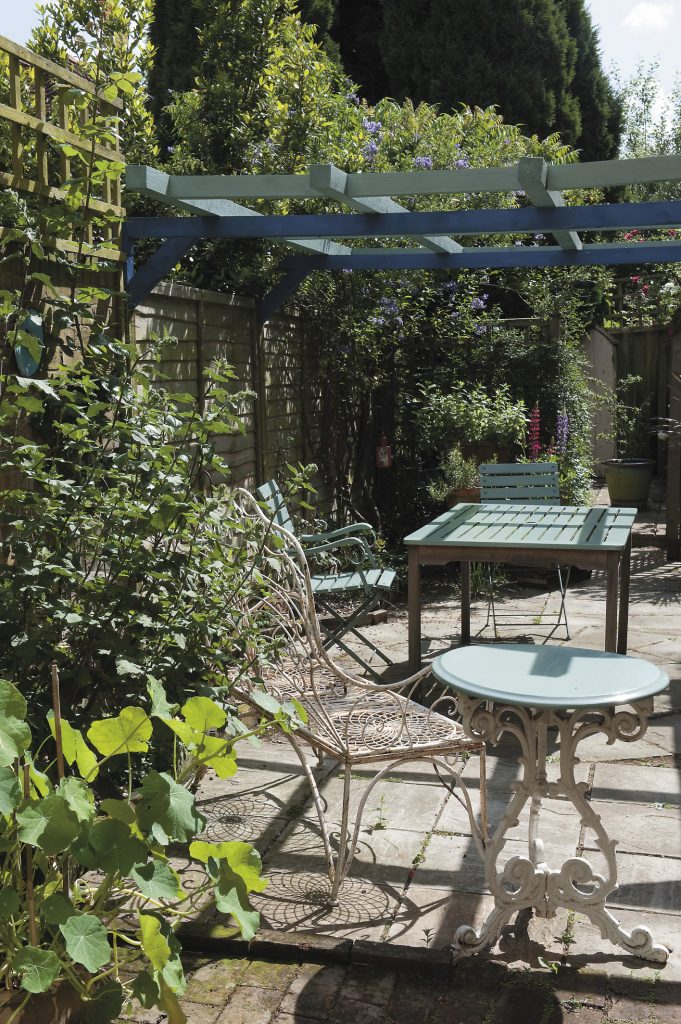