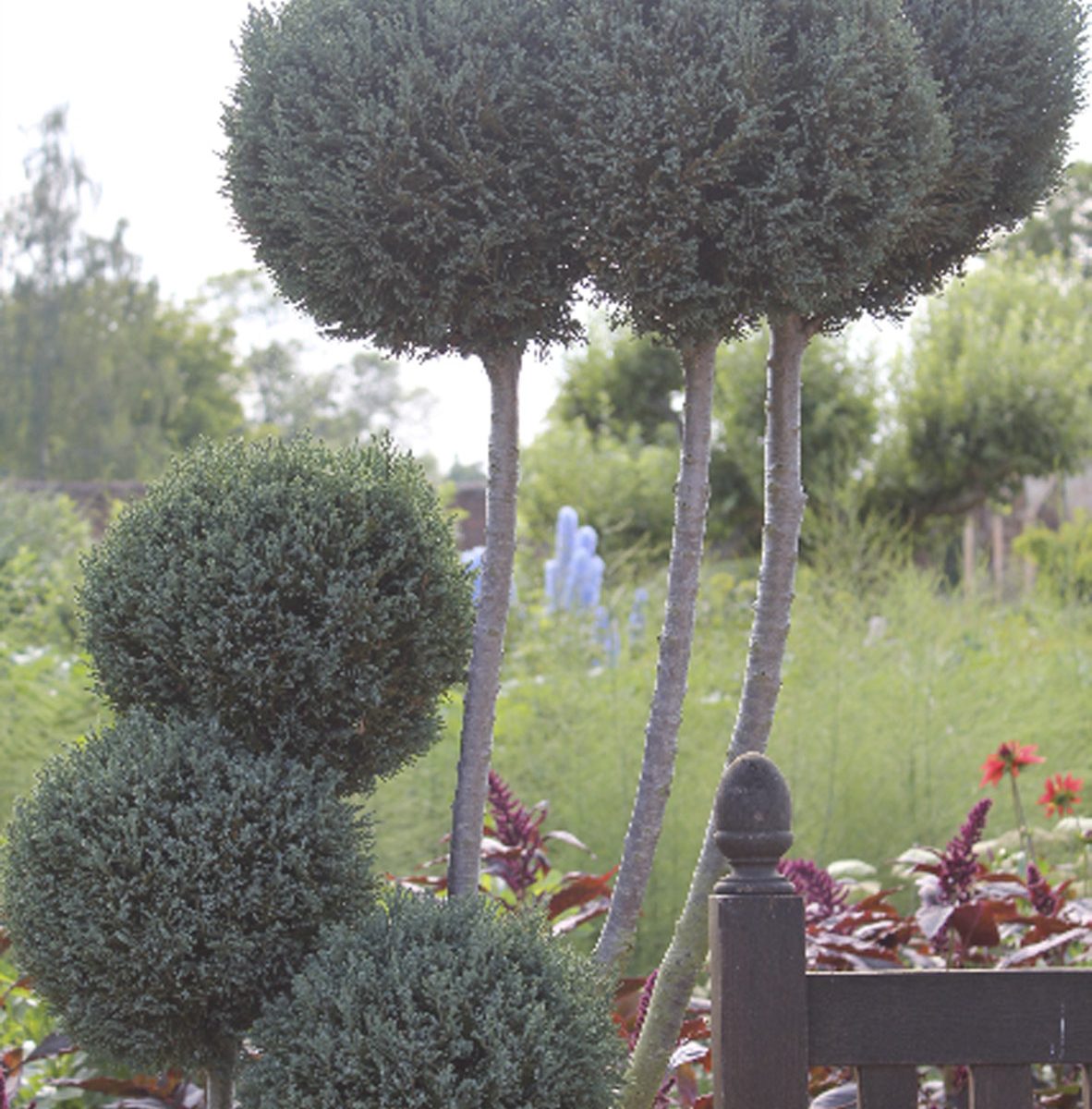 Nothing lasts forever, as they say, and the more optimistic among us are happy to leave it like that and move on. After all, in a few months (short or long, depending on your view of January and February) hopeful new shoots will be poking through. That’s fine if you enjoy looking out onto a bleak scene of ruin and decay until the spring (and some of us obviously do), but there is a way of stopping the garden from sliding into a dirty pile of sticks and sludge. Structure is what we need; a framework to help the garden look good all through the seasons, and with any luck, also provide a backdrop and punctuation for the summer lovelies, and a reassuring body (or even a skeleton) in the bleakest months.

Evergreens are what we first tend to think of when it comes to a reliable winter presence and there is a lot of choice around; there are deep green, glossy beauties like Holly, Laurel, Elaeagnus and Viburnum tinus and smaller leaved, but equally handsome shrubs like Osmanthus and Escallonia. These plants are used to not hogging the limelight – in fact during the summer you would hardly know they were there – they’ll sit happily at the back of the border, or under the canopy of trees, lurking unnoticed in dry shade and horrible soil and then in the winter you suddenly see them; some even have lovely berries or winter blossom – Mahonias are such a welcome sight in deepest winter with their huge fragrant spokes of flower. These plants are common and are often municipally planted, so that we get blasé about them, but that’s because they’re such stalwarts and aren’t seeking glory.

A hedge is a wondrous thing, giving the garden shelter from the wind, marking boundaries, leading the eye and providing a similar structural function as hard landscaping without the ‘hard’ aspect. The wind-break job they do is far more effective than a fence or wall too, because the wind is slowed down by a hedge, not stopped in its tracks by a fence or wall – where it’s left with no option but to go up and over and create turbulence in the borders on the other side. Hedges can take time to establish, it’s true, but after a couple of years most hedging plants (and there’s a remarkably large selection available, including many of the evergreens already mentioned) get going really well. The choice of hedging plant will depend on many factors – protection, privacy, growth rate and overall effect. Think about the feel of your garden – do you want the clipped formality of a Yew, Beech or Box hedge (used to good effect in formal gardens, but also to provide a framework and contrast to billowy, formless plants), a wildlife haven, or a more relaxed, informal line of shrubs that will give all year interest. Whatever your taste, there will be a hedging plant to suit.

There are some structural plants that just won’t stand in a line, in fact they won’t be told what to do at all and need to be the centre of attention all the time. Putting a plant like a Yucca or a Phormium into the shadows, or tucking it at the back of the border will make you both uncomfortable, and putting another attention seeker too close will cause a fight. Focal points work best either on their own, or among less defined shapes that will provide a foil or a background for the showier plant.

A focal point that attracts attention, but in a calmer way, will bring useful contrast and punctuation within the border. A neatly clipped box ball or other small leaved dense evergreen (even a stone ball or an ornament) will act like an anchor and bring order to the space, and if you use more than one, will set up a rhythm. This works effectively in the winter, but also at other times of the year too. A whole summer border full of delicate wispy plants can easily look like a jumbled mess, but put a well placed, dense leaved and formal looking evergreen amongst them and – like putting a teacher in a classroom, the whole space comes together and seems to be more ordered. If you haven’t the time or patience for clipping box (I love it – it’s a Zen activity), there are plenty of naturally neat evergreens that will do the job almost as well. Low growing Hebes like H. ‘Red Edge’ or H. ‘Sutherlandii’ will sit like dense puddings all through the year without needing pruning. Slightly taller, but slow growing Viburnum davidii is a wonderful plant, I think. It falls into the overlooked and unsung category, but it makes a tidy domed shape all by itself – no pruning, and has large deep green, slightly ribbed leaves. If the Hebes are puddings, Viburnum davidii is the queen of puddings.

Just as too many cooks spoil the pudding (and the broth), so too many puddings – or pudding shaped shrubs can overload a border. Evergreen shrubs are prone to blobbiness, and many don’t change through the seasons, which can be dull, verging on depressingly boring if you’ve packed the garden with them. Structure can come in different forms and need not have leaves to make an impact. Trees and shrubs with elegant skeletons, or striking bark are framework plants too. At the tall end are specimen trees like white barked birches (Betula jacquemontii is among the best) and those with tactile bark are almost irresistible – some plants, like some cats, just want to be stroked, I’m sure. Try walking past Prunus serrula and its polished, deep coppery-brown bark without reaching out your hand. It gently peels in winter sunshine and the whole tree gleams like a (tree shaped) chestnut. Many Acers are almost as good unclothed as they are with their lovely leaves on – try A. griseum for its flaking bark, which peels into cinnamon flakes, the snakebark maple

A. davidii, or the coral-bark Acer palmatum ‘Sango-kaku’. Then there are the Dogwoods, which won’t get too tall, because it’s the young stems that are coloured so you will need to prune them hard in the spring. Cornus alba ‘Sibirica’ has bright red new growth, while the aptly named C. sanguinea ‘Midwinter Fire’ has young stems that literally look as if they’re hotly glowing in shades of orange tinged with red.

Just as focal points and plants for punctuation achieve their effects within the borders, so on a larger scale, will specimen trees and shrubs in the wider landscape. Trees and large shrubs are architectural and space defining, and must be carefully positioned. Specimen plants need ‘breathing’ room too, especially if they have a good overall shape – there’s nothing worse than seeing a beautiful plant with an elegant habit hacked into an ugly lump because it has outgrown its allotted space. In winter, tree tracery is very apparent and many trees and shrubs that go unnoticed for most of the year have good natural structure. Some, like Hamamelis (Witch Hazel), Chimonanthus (Wintersweet) and Corylopsis (Winter Hazel) have scented blossom in January and February.

For structural inspiration, go and visit a public garden in the winter, if you can. There aren’t many open – which just goes to show that they have the same problems as us keeping it all going (actually this is why they can look so stunning in the summer – most public gardens are only open from April to October). RHS Wisley is a good one. Look at the way they plant for the season. There’s structure in abundance – in the form of hedges and evergreens, interesting stems and bark, shrubs with scented winter flowers. There may not be as much room to grow all these in our own gardens, and we need to leave space for the herbaceous plants, but adding some structure to the borders will pay off all though the seasons – and bring some cheer to the darkest months, I promise. 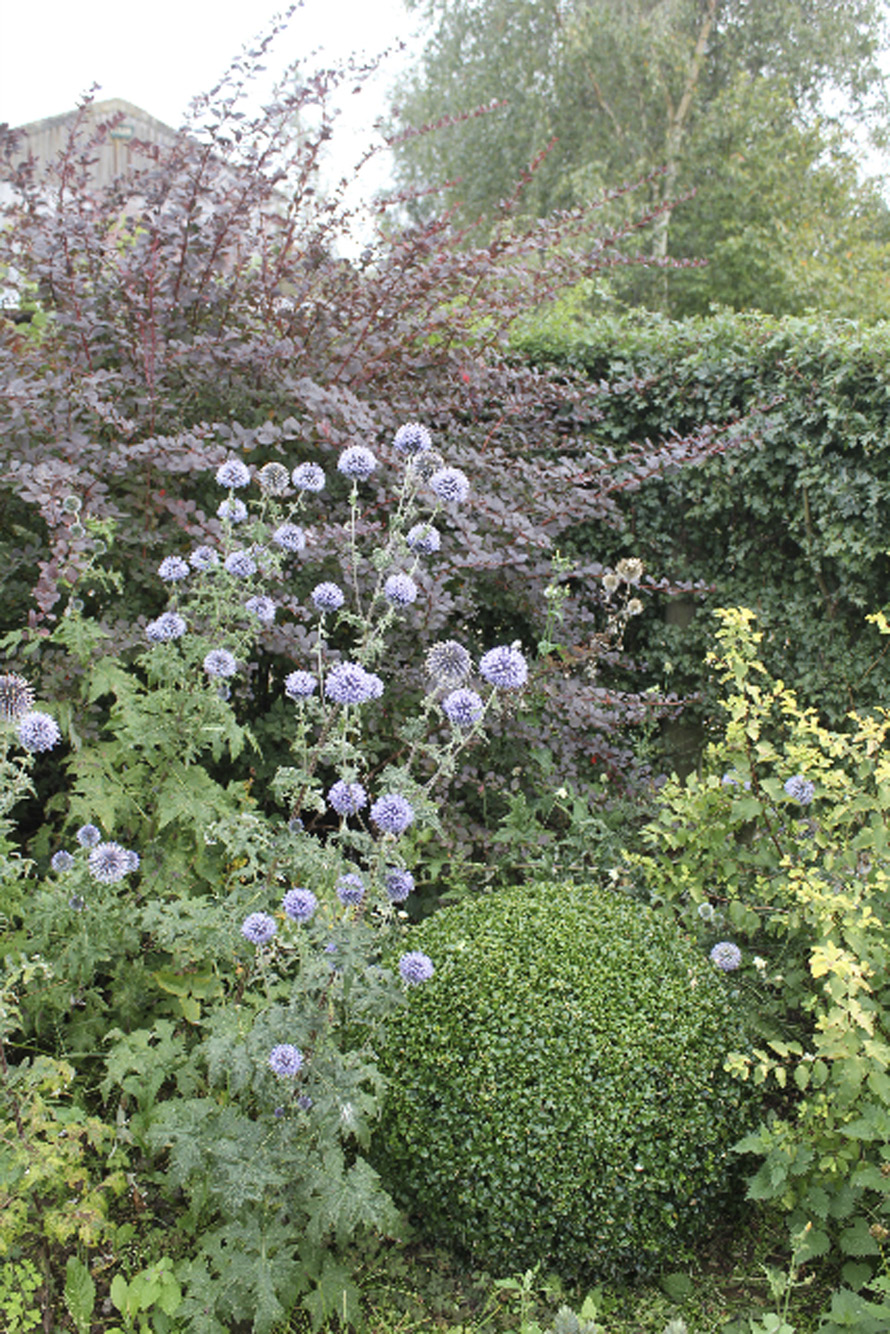 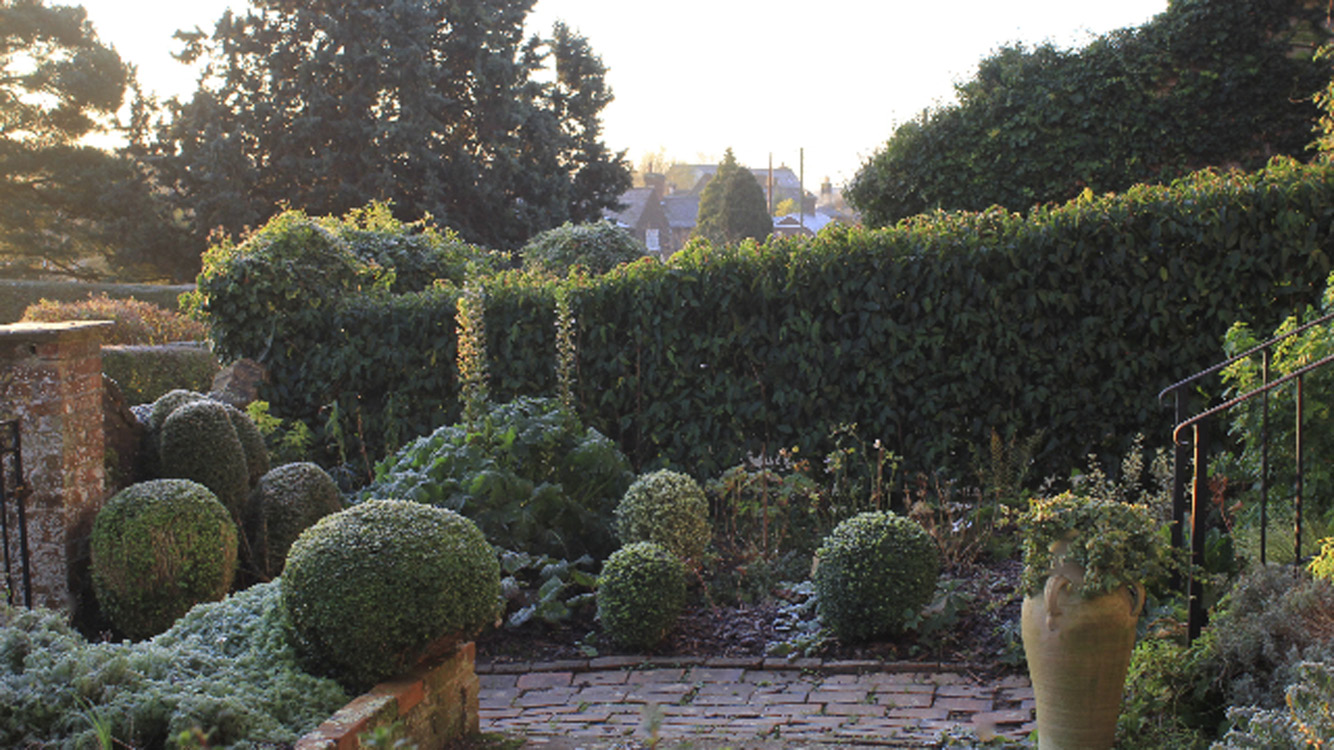 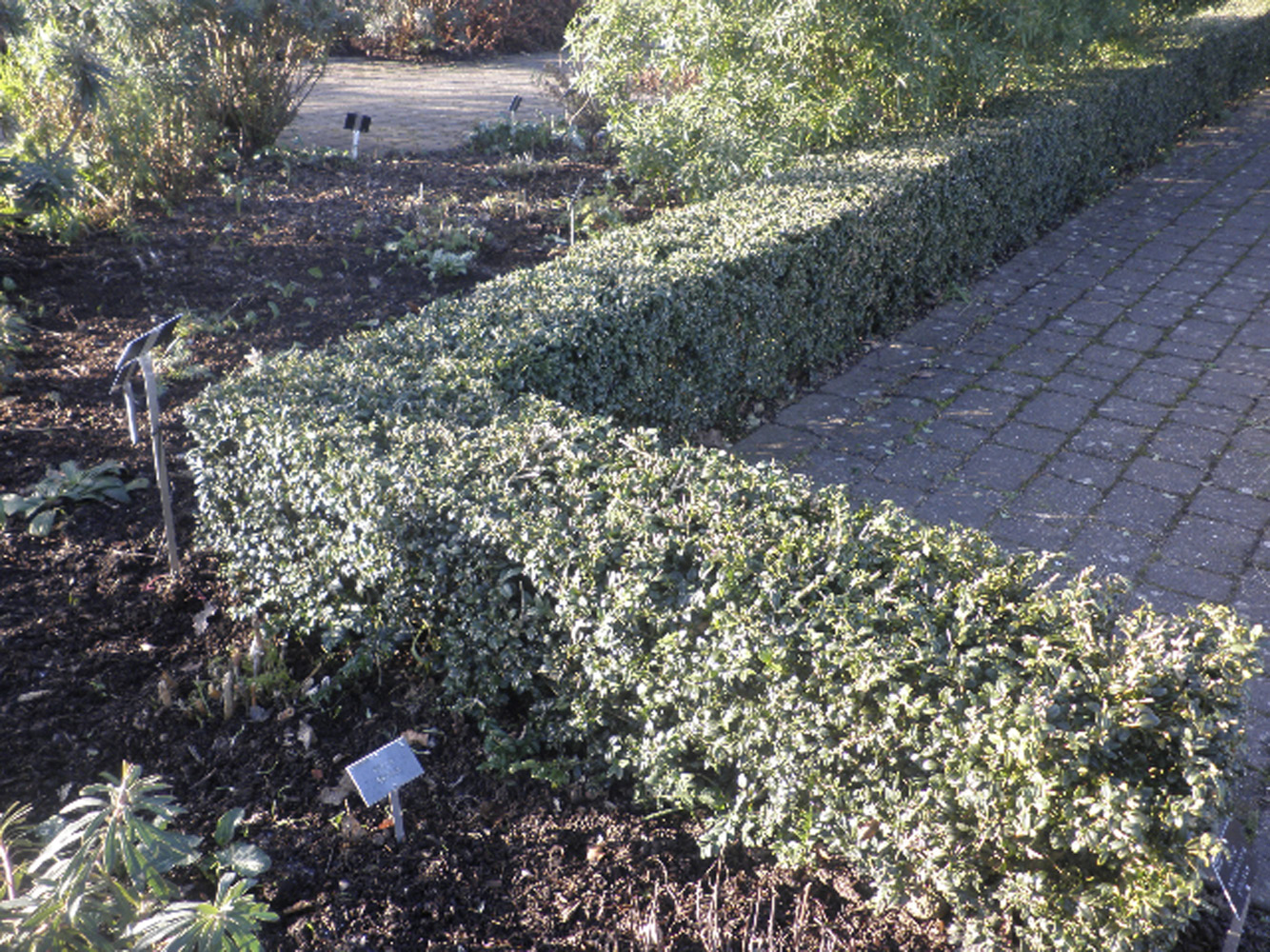