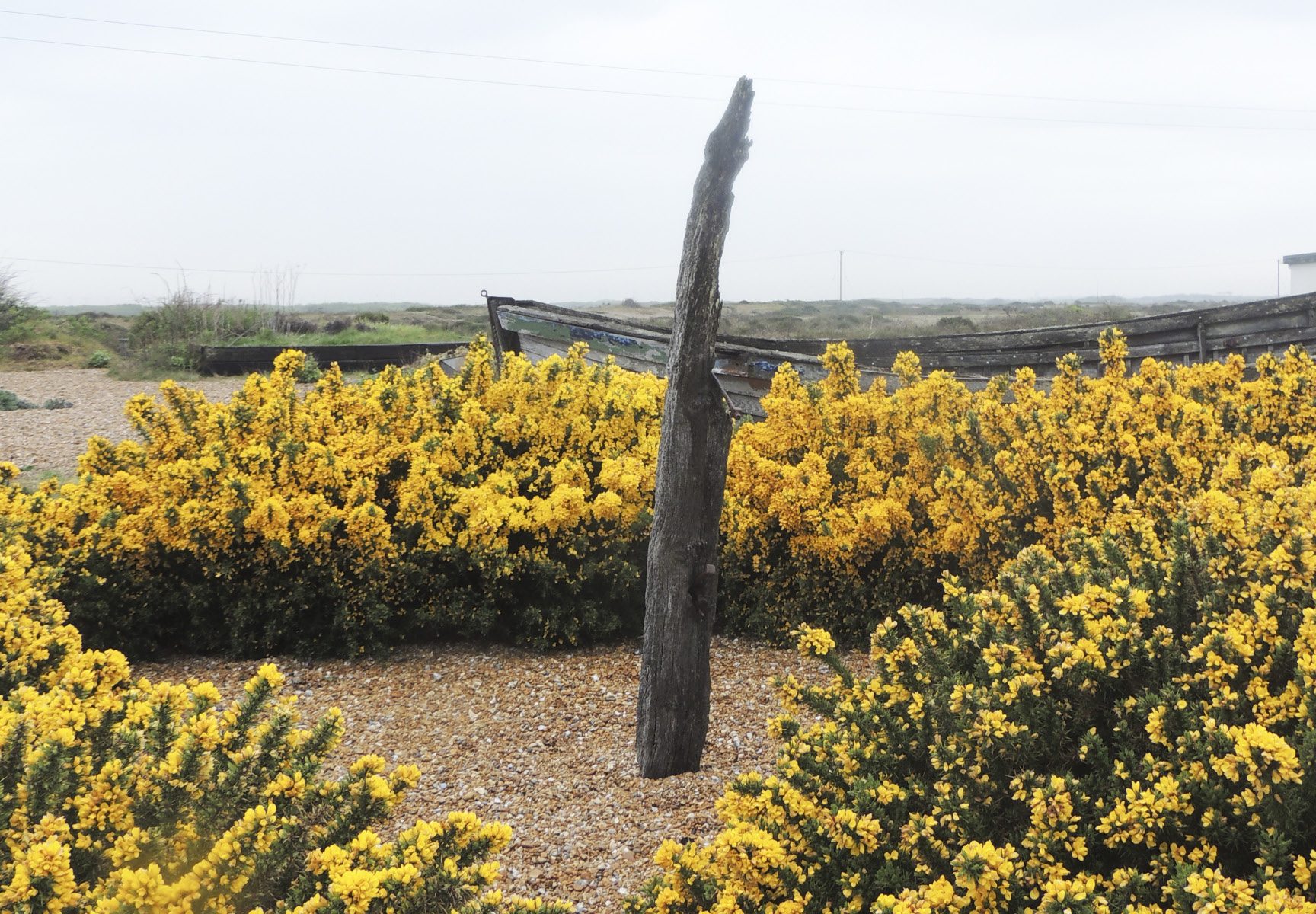 On a recent Friday afternoon it was pouring with rain as we drove through the sprawl of Camber, past the shooting ranges at Lydd and then turned off to Dungeness. The rain stopped just as we reached The Pilot, still doing good business at four in the afternoon, and we strode across the shingle with the camera to see some of the six hundred native plants that flourish in this extraordinary landscape.

Someone said that Dungeness is like Marmite in that you either love it or not. How can you not? The National Nature Reserve covers an area of twelve square miles on a headland east of Rye and between Lydd, New Romney and Camber and much of its flora and fauna is unique to the area.

It is the largest shingle formation in Europe and the building of the shingle ridges on the beach has taken 5000 years with pebbles, mainly flints, being moved up the Channel in a west-east direction. Being susceptible to both the easterly and westerly winds, storms have created shingle ridges known as fulls, and valleys, known as lows, where the pebbles are larger than those on the ridges. The ridges have more vegetation because their smaller stones retain more moisture, essential for plant life, as well as enabling wind blown seeds and humus from dead plant matter to accumulate. A third of the species native to the UK are to be found here, quite a statistic, as well as rare moths and invertebrates like the medicinal leech, rare spiders and beetles as well as bees and butterflies.

The RSPB has a bird sanctuary and observatory at Dungeness as the flooded gravel pits provide refuge for both sea birds and many migratory species.

Dungeness Power Station pumps waste hot water and sewage into an area known as ‘the patch’ which attracts seabirds. It is said that the sea kale (of which more later) is the plant that ‘accumulates radioactivity’ from the power station more than any other plant – according to Derek Jarman, the painter, gardener and film maker, who lived at Prospect Cottage, Dungeness from the late eighties until his premature death. He had this on good authority from a radiologist.

Rainfall is low but there is less frost than the rest of the UK so myriad plants have adapted to the conditions enabling them to flourish in what might seem to be a pretty bleak, desolate landscape.

In early May the Sea Kale (Crambe maritima) is predominant. Derek Jarman described seeing the roots of one plant exposed to the air after a particularly wild storm as being twenty feet long, surely exquisitely adapted to life on the shingle. Sea kale is edible and people used to blanch it in the same way you would rhubarb, but by piling the shingle over it. In the winter the plant dies right back leaving just a little corky bud above the ground, but in the spring the leaves sprout and are a beautiful purple. As they mature, they become a glaucous blue green. They are designed to catch rain and direct it to the centre of the plant. Sprays of honey-scented white flowers appear, followed by clusters of hundreds of pea-like seeds. These in turn are very beautiful and as they dry, they blow away and colonise another part of the shingle.

Another dominant plant is gorse – honey-scented, too, and an intense yellow. It comes into flower very early in the year and just in time to provide food for emerging bees.

I’m not sure that I was expecting to see prostrate broom on the beach. It is just coming into flower now and is a really unusual pioneer species. Its flowers are pea shaped and a rather softer yellow than the clouds of broom up by the roadside.

Many of the pea family feature at Dungeness, the Meadow Vetchling (Lathyrus pratensis) being one. As peas fix nitrogen in the air by means of particular bacteria in their root nodules, they are ideally adapted to live in an area where the soil is poor. They flower from May through to August but we didn’t spot any in bloom this week.

Bees love Viper’s Bugloss (Echium vulgare). Such a beautiful plant and such an interesting one too. Its name comes from the Greek, and is described as resembling an ox’s tongue, in that its leaves have tiny spines and are slightly rasping to the touch as well as being a similar shape. The bright blue flowers seem to glow as the light fades in the evening.

Moths are particularly attracted to the flowers of the Nottingham Catchfly (Silene nutans) as they open at night and entice the insects with their fragrance. They are rare plants in the South East but abundant at Dungeness. The flowers are either pale pink or a creamy white and the petals are rolled right back, making easy access for moths and the plant has tiny hairs which retain moisture.

Another member of the same plant family, the Sea Campion (Silene uniflora) is in full flower now. It is interesting to see how low this plant grows, perfectly adapted to cope with the force of the winds at Dungeness. Delicate white flowers combine with beautifully red-veined bladder-like calyxes beneath. We saw another similar plant with a yellow calyx but I’m not sure which campion this was. Very sparkly though, especially in low light.

Valerian (Centranthus ruber) is starting to flower on the beach. How I love this plant. It grows all over the beach and up by the side of the road to the power station and lighthouses – frothy clouds of red, pink and white throughout June. It is a mad self seeder and spreads itself liberally wherever it can and copes very well in shallow soil, hence being happy on the shingle. The other good thing is that the scented flowers attract Painted Lady butterflies and bees as well as other pollinators.

In August the bees go for Woodsage (Teucrium scorodonia) just coming through the shingle now. The small leaves of this plant are heart-shaped and wrinkled and the plant grows low to avoid the worst of the winds but during flowering time lovely little greeny yellow flowers with maroon stamens appear. They are strongly honey scented to attract pollinators including bumble bees as they’re full of nectar. Even the long lip of the flower is adapted to make it easy for the insects to forage easily. How clever Nature is. 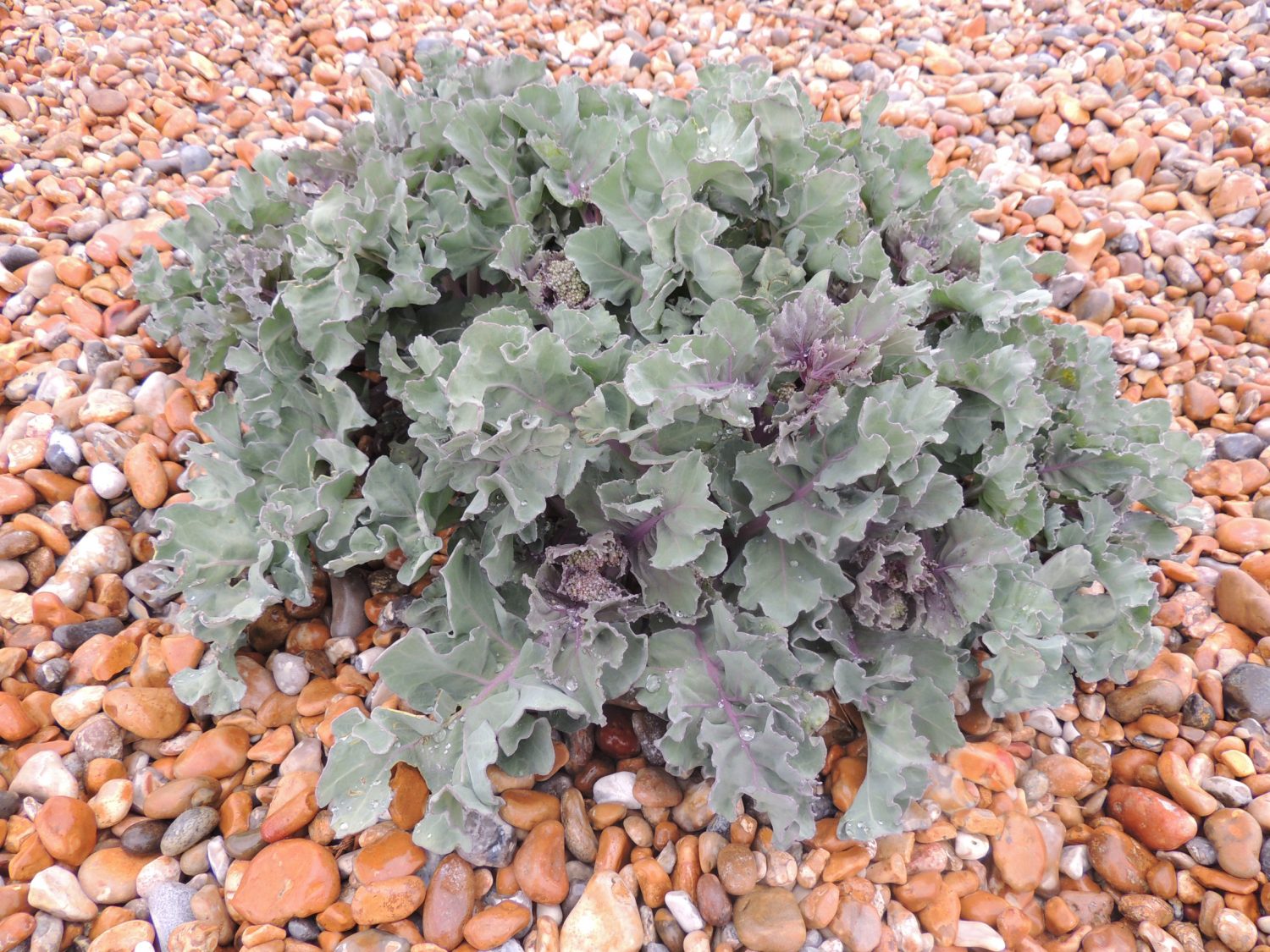 Sea kale is edible and people used to blanch it in the same way you would rhubarb, but by piling the shingle over it 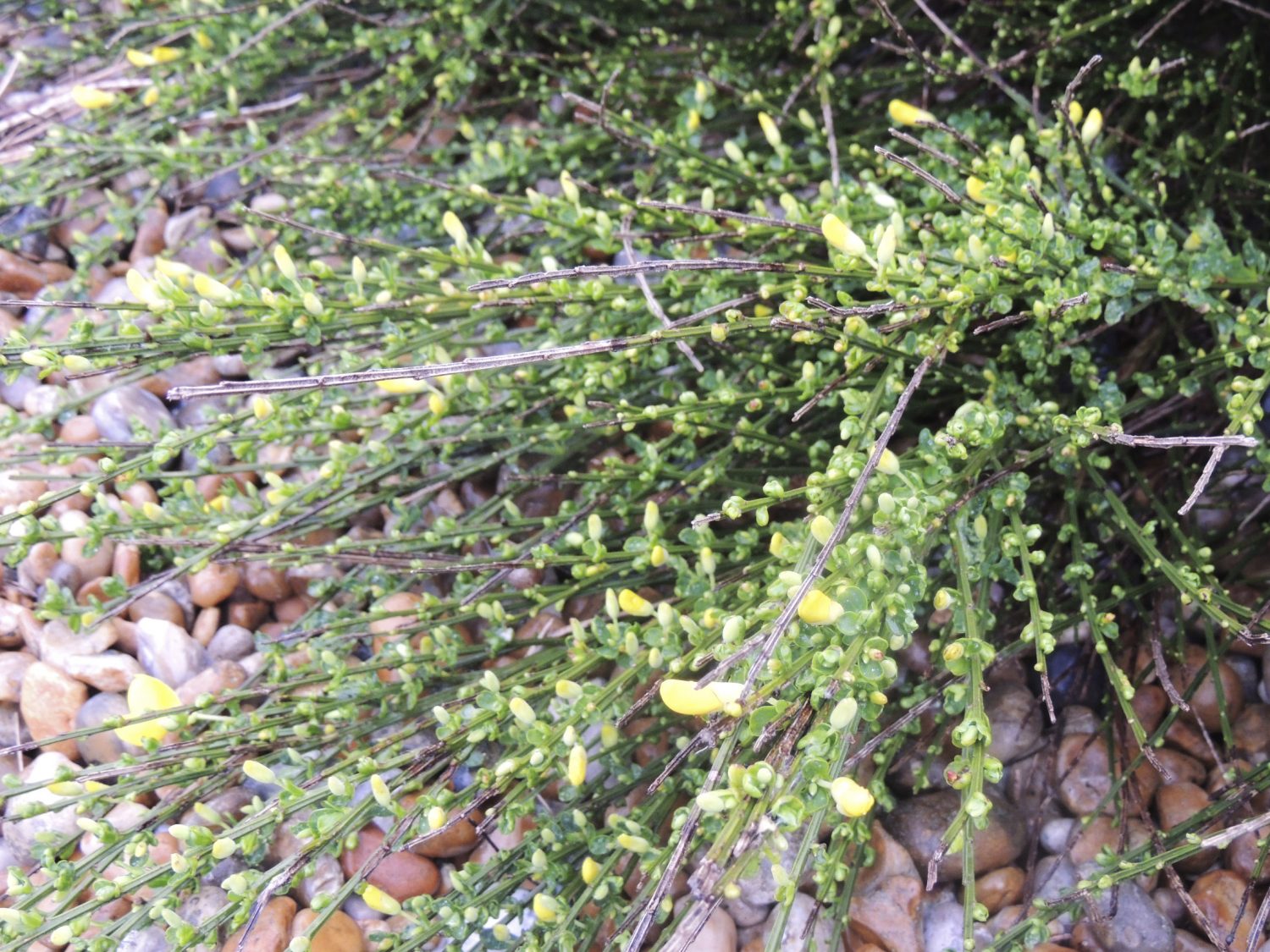 I’m not sure that I was expecting to see prostrate broom on the beach. It is just coming into flower now and is a really unusual pioneer species. Its flowers are pea shaped and a rather softer yellow than the clouds of broom up by the roadside 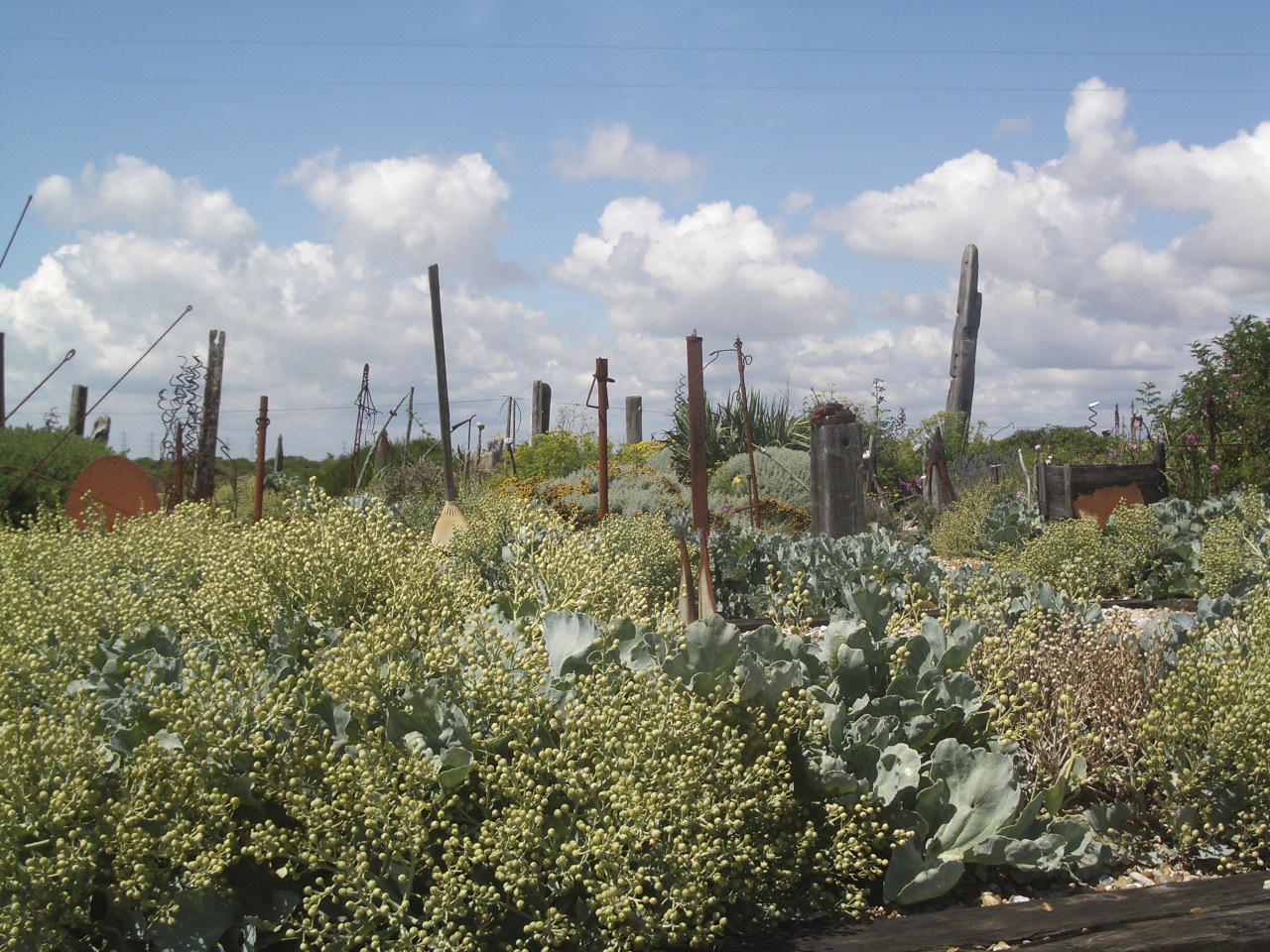 Sea Campion grows really low, perfectly adapted to cope with the force of the winds at Dungeness