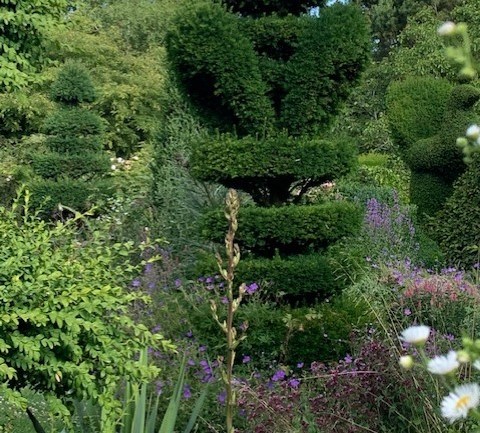 I think I might have taken Charlotte too literally when she suggested an early meeting in her garden last Saturday morning. And I must say that my dogs too seemed a bit bemused to find themselves down in the woods for an earlier than usual morning constitutional. But it was worth it, as arriving in Benenden around the Green and then meandering along the unmade track to Balmoral Cottage, my visit was heralded by a veritable cacophony of bird song; a fabulous start to any morning, let alone that of a glorious July day. And so on through an old metal gate topped by a hornbeam arch and along the path, lined with substantial ball topped boxwood hedges, there was Balmoral Cottage almost completely enveloped by surrounding greenery. And now a gentle greeting by a friendly, rather elderly dog and then Donald was at the door whilst Charlotte was already out in the garden watering the plants in their poly tunnel.

Charlotte and Donald bought the house and about five acres of land soon after their marriage in the early eighties. For years it had been the gardener’s cottage to The Grange, the ‘big house’ next door, which was home to Collingwood ‘Cherry’ Ingram from 1919 until 1981. Plantsman, plant hunter and ornithologist, ‘Cherry’ Ingram had, by the 1930s amassed a collection of more than 79 varieties of his particular passion, cherry trees, at The Grange and of course many of them are still in the gardens there.

I like the sound of ‘Cherry’ Ingram’s gardeners who previously occupied the cottage. There was Mr. Wart who grew his own tobacco and hung it out to dry in the kitchen and the Locks who too lived and worked the land for about forty years. It boded well for the Molesworths that the land was fertile, having been a kitchen garden, but on their arrival the house had been empty for a couple of years and the site was overgrown by flowering vegetables-and the usual weeds such as giant thistles, nettles, bindweed and docks.

They had arrived on Christmas Eve 1983 with an entourage of potted plants, two dogs, two cats, seven chickens and their ancient donkey who initially had free range. (We can relate to that as we arrived here with pots, dogs, cats, and donkeys!) But finding that the house was dry and that the Rayburn still worked, as well as waking up to the Christmas bells at the nearby church the following morning, must have been a joy. They soon set to work clearing the site and then covering the ground with anything they could find which would prevent the weeds from taking over again.

Donald had trained in Horticulture at Plumpton College and began work at the Grange and Charlotte has horticultural running through her veins as well as being a hugely talented artist. Her father was a farmer up on the North Downs and her mother, Greta Cox, had a nursery growing and selling choice plants like the double, pure white primula, Primula ‘Alba Plena’, said to be centuries old and a particular favourite of Charlotte’s. She also grew rare and fancy leafed Pelargoniums,  along with other favourites such as old roses, ferns and Paris polyphylla, which is one of the most exquisite and exotic hardy perennials imaginable.

Her mother loved box and yew, as did her aunt, and it was they who first instilled in Charlotte her love of topiary. So whilst others were asking for dinner services and saucepans for their wedding presents, first on their list were bare root yew plants, which could then be planted out in rows to grow on.

So these yews became the backbone to what is now a magical garden of rare trees and of yew and boxwood topiary. The exuberant borders are full of really wonderful plants and plant combinations in particular all bordered by great hedges cut into fantastical shapes. There are over thirty species of box in the garden, collected from other gardens over time. Many were bought originally from Langley Boxwood Nursery, which was set up by Elizabeth and Mark Baynbridge, when plants used to cost about £1.50 each!

There are fastigiate forms that shoot up vertically and need little clipping, various variegated forms, box with wonderful shiny rounded leaves and everything in between. Charlotte makes lots of cuttings and swaps cuttings with friends, knowing the provenance of each plant. Indeed, almost all of the box came as cuttings from her previous garden. She has rescued plants that were about to end up in a skip down in the village. Can you believe that anyone would throw out a tree peony? And a table outside Charlotte’s studio, built as a result of a commission for a mural she took on down in the West Country, is a perfect place to sit and take in her collection of scented pelargoniums (reminiscent of her mother’s collection) and some great pots of succulents.

One of my favourite areas – one of many – is what Charlotte called ‘child’s garden’ with a Victorian fern seat at one end and then a central border with a planting of tall verbascums combined with the soaring yellow umbellifer flowers of the parsnip, Ammi and another favourite of mine this time, Eryngium giganteum, or Miss Willmott’s Ghost, which draws in all manner of pollinating insects. Also there is that little treasure, Dianthus carthusianorum, the Carthusian Pink, with its slender stems and sparkling magenta flowers. There was also an old sink filled with pebbles, shells and a collection of sempervivums.

As the years went on the garden continued to develop organically and Charlotte and Donald acquired more land and dug a pond. This was also a wedding present and integral to the garden’s layout as it came early on and they had a difficult task deciding where to put it. It is now surrounded by an area of wild flowers and lots of interesting trees. There is a sense of a borrowed landscape from the great trees that edge the garden such as Scots pines, Pinus radiata and Malus hupehensis, some grown from seedlings from the old ones in the Grange.

Amongst all the other interesting trees and shrubs is a large specimen of Heptacodium miconioides AGM, also known as the Seven-sons flower of Zhejiang, which has the most extraordinary and distinctive wavy leaves which are large and curl downwards. The tree flowers in late summer into autumn and has seven scented flowers growing from the panicles at the end of its branches. Native to China, luckily it was reintroduced into the horticultural world before it became extinct in the wild in the 1980s.

Shady areas are full of lovely native ferns, saxifrages, silver leaved pulmonarias and more plants than I could take in all in one go. I notice Rosa x odorata ‘Mutabilis’, grows in several parts of the garden. This year we have released ours from its life in a large pot and it has been rewarding us with a constant display of its extraordinary single flowers which change from orangey yellow to copper pink with a final display of red.

Charlotte and Donald open their garden to the public through the National Gardens Scheme (NGS) and charities such as St. Michael’s Hospice. I recommend a visit so that you can see this enchanting topiary garden and its treasures for yourselves.

You can also enjoy artworks by Charlotte Molesworth, Peter M Clarke and Colin Griffith, and explore the garden at Three Artists in a Topiary Garden 2022. It will run on Saturday 20th and Sunday 21st, Saturday 27th, Sunday 28th August and Bank Holiday Monday 29th August from 11am til 5pm. Entry will be free, with a jar for donations to local charities.Dogs on leads are welcome.