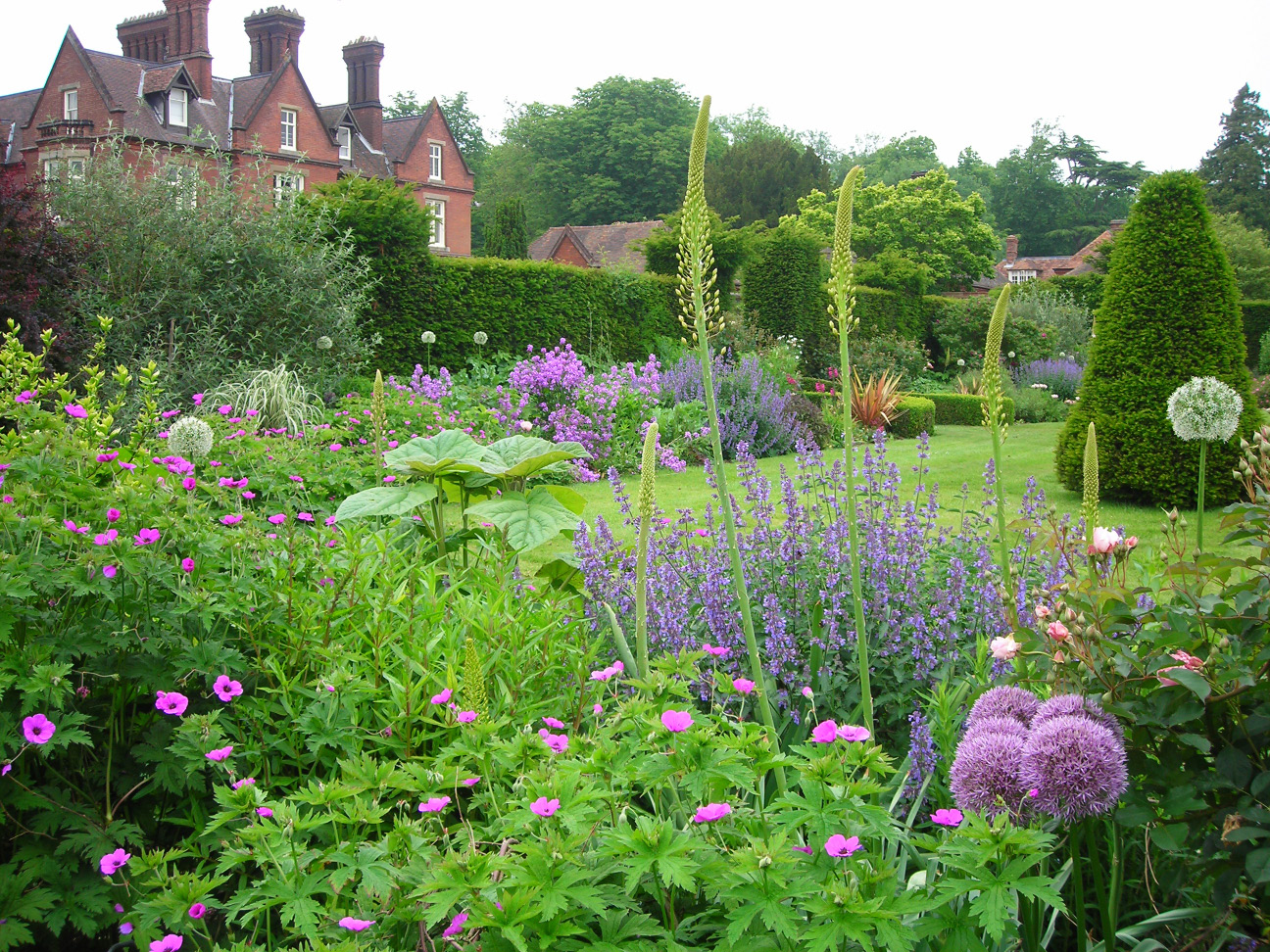 To escape from the dreariness of the A20 up into the lanes of the North Downs was a treat in itself but to arrive at Doddington Place Gardens, with its really quite fabulous collection of mature trees lining the, drive was even better. We’d started the day at Marble Arch tube station and by early afternoon were wandering through the three acres of woodland garden at Doddington on a spring day. Perfect.

It wasn’t until the sixties that it was discovered that there was deep acid loam in this part of the garden – unusual in the flinty chalk Downs – and so some of the trees were cleared and a woodland garden planned and planted. Now wide paths lead you through the woodland with its spectacular rhododendrons and fragrant azaleas underplanted with, amongst other treasures, the deliciously scented Smilacina racemosa, lily of the valley, stands of hostas, epimediums, day lilies, silenes, persicarias and hellebores. This winter the gardeners have been crown lifting some of the more mature trees, letting more light and air in and allowing newly planted specimens like the spectacular Magnolia campbellii and Cornus kousa to establish.

Doddington Place is set in 850 acres of spectacular countryside; the garden itself is ten acres and the parkland twenty. Walkers are actively encouraged to walk through the park and, of course, there are many footpaths through the estate. The house itself, a substantial Victorian mansion with its many chimneys and gables, was built in the 1860s for Sir John Croft, a scion of the Croft port family. Extensive plans for the garden were originally drawn up in the 1870s for Sir John by Markham Nesfield but the garden is, in the main, the legacy of ‘Aunt Maud’ or Mrs. Douglas Jefferies (nee Oldfield) who with her husband, General Douglas Jefferies, bought the house in 1906. It is said that she fell in love with the view and had resolved to buy the house before she actually went in. I can just imagine how she felt on that day….

Mrs. Jefferies was responsible for planting about a mile of box hedging. Between the Wars there were eight gardeners at Doddington but during the Second World War the hedges were left to their own devices and subsequently developed organically into the wonderful and giant cloud forms that you can see today. They are quite astonishing and to me it would be worth visiting the gardens to see these alone. Interestingly, they are clipped just once a year with the help of tall cherry picking ladders, as they have been for the past fifty years, with the cuttings being passed on to a pharmaceutical company to be used in the production of Taxol. Part of the hedging is used as a backdrop to the stage area at Doddington where an annual opera is performed. This year it is to be ‘The Marriage of Figaro’ performed by The Opera Project in aid of the Kent Association of the Blind.

The Edwardian rockery was another project of Mrs. Jefferies and it has recently been extensively restored and replanted. Amicia Oldfield, who now lives at Doddington, met Matt Jackson, the Head Gardener at Doddington, whilst at a seminar on rock gardens at the Oxford Botanic Garden, where he was responsible for the rock garden and alpine houses in particular, six or seven years ago. She invited him to come and advise her at Doddington. Matt was also involved in the overhaul of the quarry garden at Scotney Castle where he spent four years as Head Gardener. Since their initial meeting, five hundred tons of rock have been moved, and additional ragstone has been brought in from a Maidstone quarry as has rock from Ireland which was sourced by the same quarry. Whilst the old yuccas were kept and tidied up, much of the planting here is new but is already settling in well, with Welsh poppies and Euphorbia myrsinites seeding and spreading happily in crevasses and in the gravel. Pools gently cascade into a larger lower pool which has rocks emulating a quarry on two sides. Valerian and woolly-leaved salvias are finding toeholds in the rock as are clumps of house leeks, which are bulking up happily. Shrubs and undergrowth between the rockery and the parkland have been cut back giving, to quote, a ‘rock garden with a view’. Simple but good looking iron railings, newly restored, divide the parkland from the garden here so that visitors can have an uninterrupted view to the south.

There is also a Sunk Garden, with a central pool and deep herbaceous borders. The yew hedging round this was planted sixteen years ago and the ‘gables’ cut into it mirror those of the house. The small contained rose garden has gone through several transformations. The roses have gone, the peonies that replaced them have too and now there are simple box obelisks, and a series of coppers sourced in Suffolk now full of tulips soon to be replaced by French lavender grown from seed. In the summer the beds are full of a combination of Verbena bonariensis and a pale yellow water lily dahlia whilst now they are planted up with peony-flowered tulips. Whilst we were there the central copper contained tulips, the colour of which was a perfect match for the rosy purple blooms of the Judas tree, Cercis siliquastrum, in the garden beyond.

The Wellingtonia Walk is lined with giant Sequoia gigantea or Wellingtonias which were introduced into the country in the 1850’s and it is thought that these date back to this time. The Spring Garden, Pond and Folly Walks are to the east of the woodland and divided by high yew hedges. The Spring Garden is particularly lovely now with malus and medlars planted amongst long grass underplanted with spring bulbs, and in the centre, curved box hedges surrounding a mirrored obelisk – a sundial designed by David Harber as a Millennium project. Finally, the Pond Walk next to the Spring Garden has recently been replanted with an avenue of Betula utilis var. jacquemontii ‘Grayswood Ghost’, a particularly ‘aristocratic’ birch with a strikingly white bark and large glossy leaves. As they mature, the contrast between their trunks and the dark hedging will be wonderful. 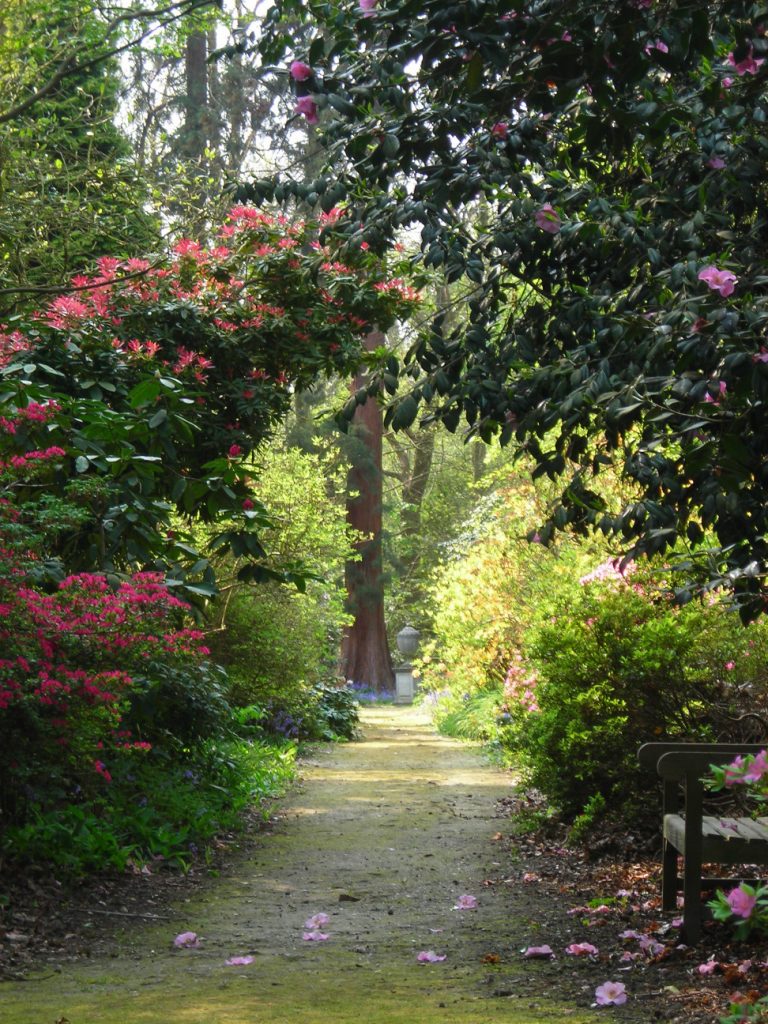 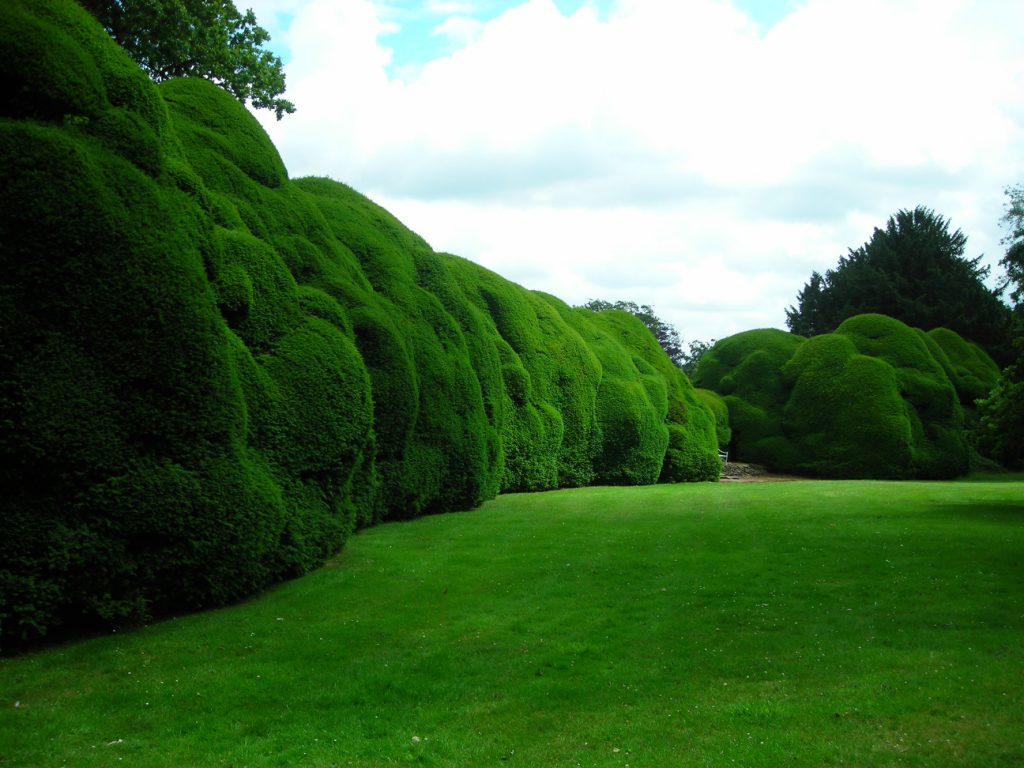 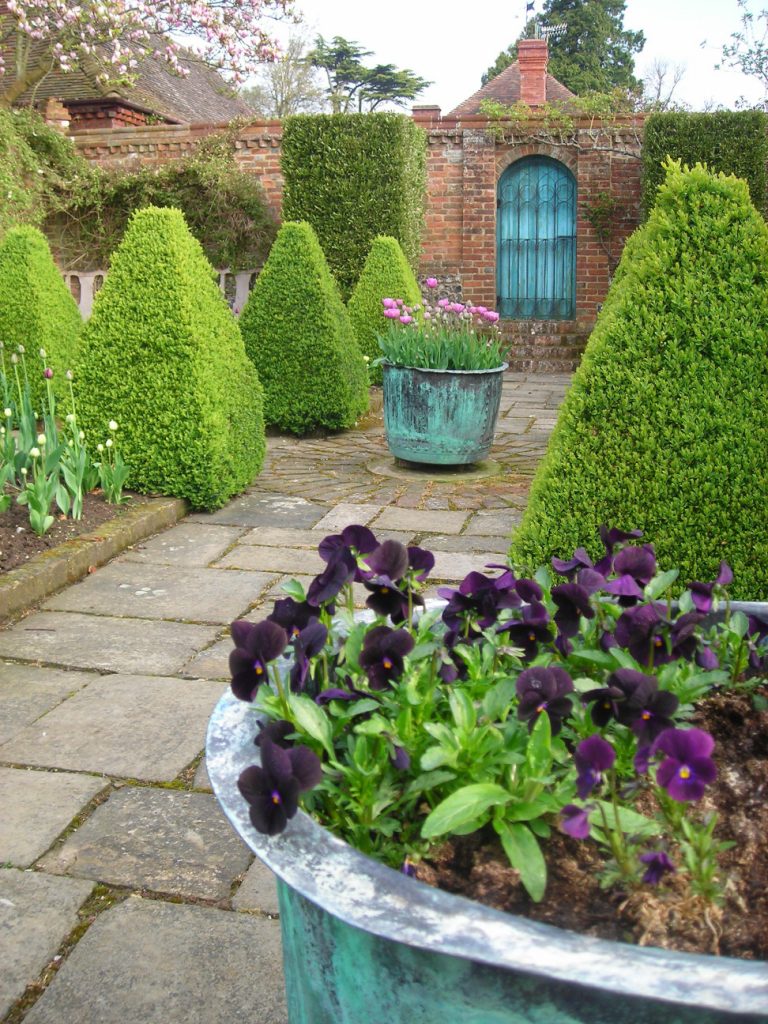