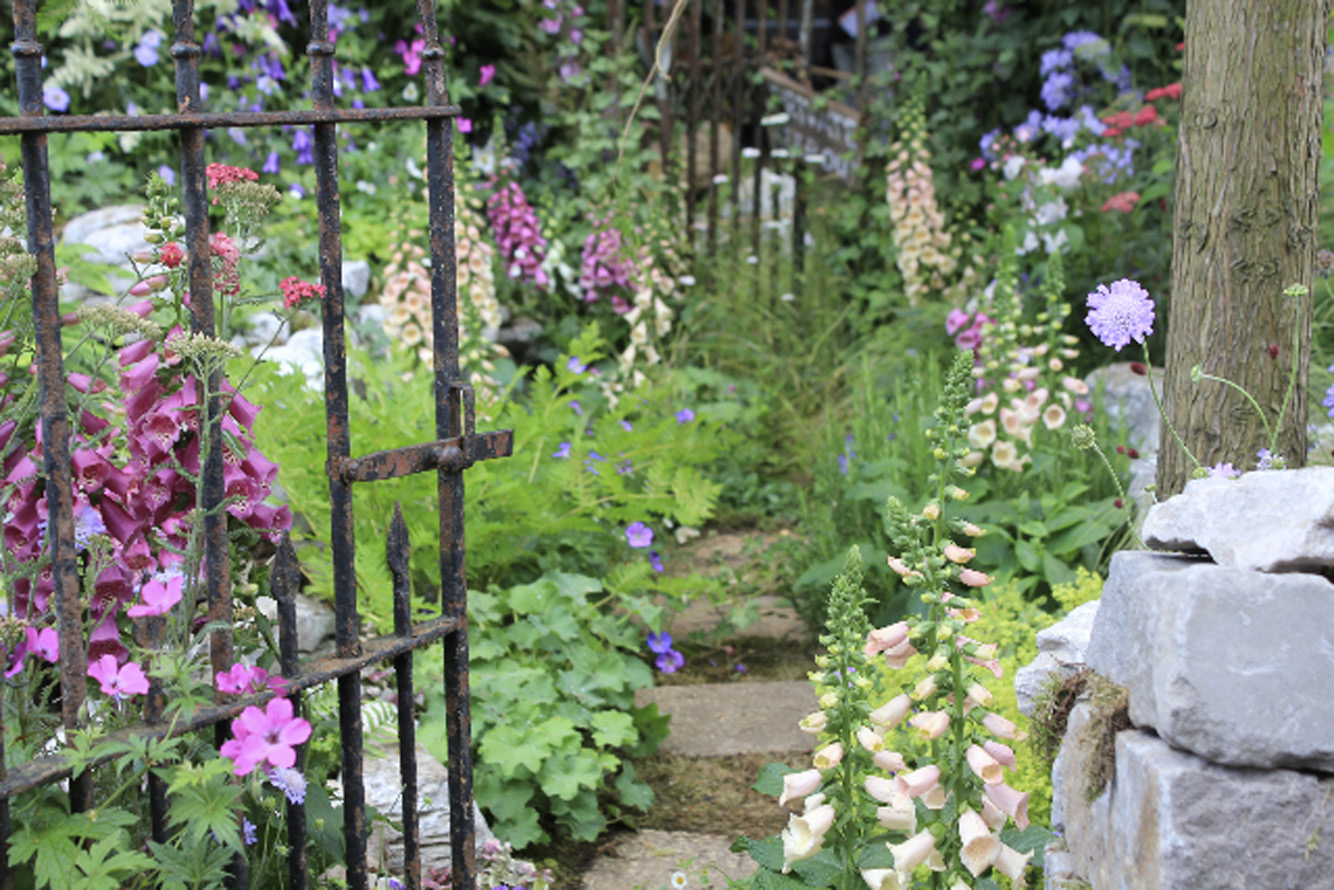 Classic herbaceous perennials, like Delphiniums and Geraniums have been gracing our gardens for centuries and have come to symbolise our ideas of high summer and of simpler times (those happy days when most of us lived in cottages and toiled on the land). Of course the earliest cottage gardens were mainly vegetable and herb gardens that gradually became populated by flowers – self-seeders and semi-wild plants – and even today much of the appeal of the cottage garden lies in the self-sown, easy-going nature of the plants. A traditional cottage garden is a relaxed affair, with a combination of tall spires, friendly hummocks and a few sprawling wanderers in the mix. It should look relaxed, charming and ever so slightly wayward.

Gorgeous as the flowers in a traditional cottage garden are, unfortunately most of the classic flowers – Peonies, Lupins, Poppies etc, are over by the end of June. Many need a sunny position in order to really thrive and there are issues with some of the individual plants too. Delphiniums will need careful staking (but even then don’t always behave themselves, often ending up like a parade of drunken soldiers). They’re also, and I’m afraid this goes for Lupins too, prone to slug attack. Actually it’s more annihilation than attack and it’s very upsetting to discover that the beautiful plants you put in last year (and have been searching the border for all spring), failed to appear because they were eaten as shoots earlier in the season. If you have become frustrated trying to achieve the loveliness (so often advertised as being easy), here are some ideas to help get that perfect, carefree cottage garden look:

When the June rush is over, and there’s still acres of summer to fill and long days of gazing into our garden borders, let’s try not to spend that time wondering where all the flowers have gone and seek out some stalwarts that will help keep the show on the road. There are some plants that don’t seem to know how to stop flowering, carrying on right through from June until the frosts. My top three are Verbena bonariensis, Gaura lindheimeri and Geranium ‘Rozanne’. They will mix well with other perennials and continue to look good well into the autumn. If you want to extend the colour at the other end of the summer (it might be just me, but it feels like we get more Indian style summers now) then Penstemons, Asters, Sedums and Echinacea are good cottage garden plants for later in the season.

If you’ve been staring woefully at raggedy, slug chewed leaves, or worse, empty soil where once grew a lovely thing, or perhaps you’re already fed up with the nightly slug patrol around the garden (or guilt tripping about those blue pellets), there is another way and that is to grow plants that they won’t eat. The key is to find perennials that aren’t too succulent and sappy, so plants with leathery or tough leaves like Hellebores, Sedums, Euphorbias and Roses (which also bear off-putting thorns). If you crave the spires of Delphiniums and Lupins, perhaps try growing Verbascums, as they seem to be less prone and there’s also the stately (but sometimes overenthusiastic) Acanthus spinosus. Slugs won’t head for cottage stalwarts like Geraniums or Alchemilla mollis either. There’s a good website –www.allaboutslugs.com which has a list of slug resistant (note: it doesn’t say slug proof) plants, and even a section about slugs inside the house – I’d hate to think it could get that bad, but the site shows a few alarming pictures…

Don’t despair if your garden is on the gloomy side; it’s entirely possible to create a quintessential cottage garden border in a shady site. You may need to pay attention to the slug issue here too though, as shade and slugs go together I’m afraid. Foxgloves will provide the lovely spires – try Digitalis alba for stately white, or the soft muted hues of D. ‘Sutton’s Apricot’, and Acanthus again. There’s Geranium phaeum (deep maroon or white flowers) that likes shade, Alchemilla mollis, Dicentra spectabilis, Astilbe, and the essential late bloomer for shade, Anemone japonica, with its tall (and unbending) daisy flowers in white or various pink shades. All the above are slug resistant. When choosing flowers for shade, remember that pale colours will show up better and will ‘lift’ a shady corner.

If you want a more updated look to your cottage garden, try using a few architectural plants and grasses amongst the perennials. The addition of grasses will bring movement to the border and also extend the interest into the winter. My current favourite grasses are Calamagrostis ‘Karl Foerster’ for its golden uprightness, Pennisetum (fountain grass – but check that it’s a hardy variety) and Stipa tenuissima, which is low growing (and so tactile you’ll want to bend right down and stroke it). Grasses are surprisingly versatile in the border, provided you don’t make a prairie out of them and use too many, which would be more suited to wide open spaces than demure cottage situations. Grasses blend beautifully with nearly all perennials, but work especially well next to those that make good winter silhouettes; try Phlomis russeliana for its soft yellow whorls of flowers knotting their way along stiff stems and standing strong through the winter. Rudbeckia ‘Goldsturm’ has long-lasting yellow daisy flowers in late summer – yes, the wrong yellow, but you might learn to love it because it just cheerfully gets on with it and romps away, and also has good winter seed heads that show up well against grasses and the bare stems of Cornus.

The key when designing a cottage garden border is to mix it all up and not to be over conscious of the design – I normally try to plant in groups of at least three of a single species, but the cottage look relies on a less strict approach to planting quantities and single plants popped in where there’s a gap will be fine. Just try to remember to contrast the shapes and colours – put spires next to dome shapes, add a few wiry stems with plants like Geums, or sprawlers like Valerian (Centranthus ruber), contrast big leaves with fine and use more of a tapestry of colours than a uniform colour scheme. The idea is to make it seem natural and not too contrived – imagine you’re a simple peasant in a Constable painting, planting flowers (and possibly turnips) around your humble cottage before you go back to working romantically in the fields. 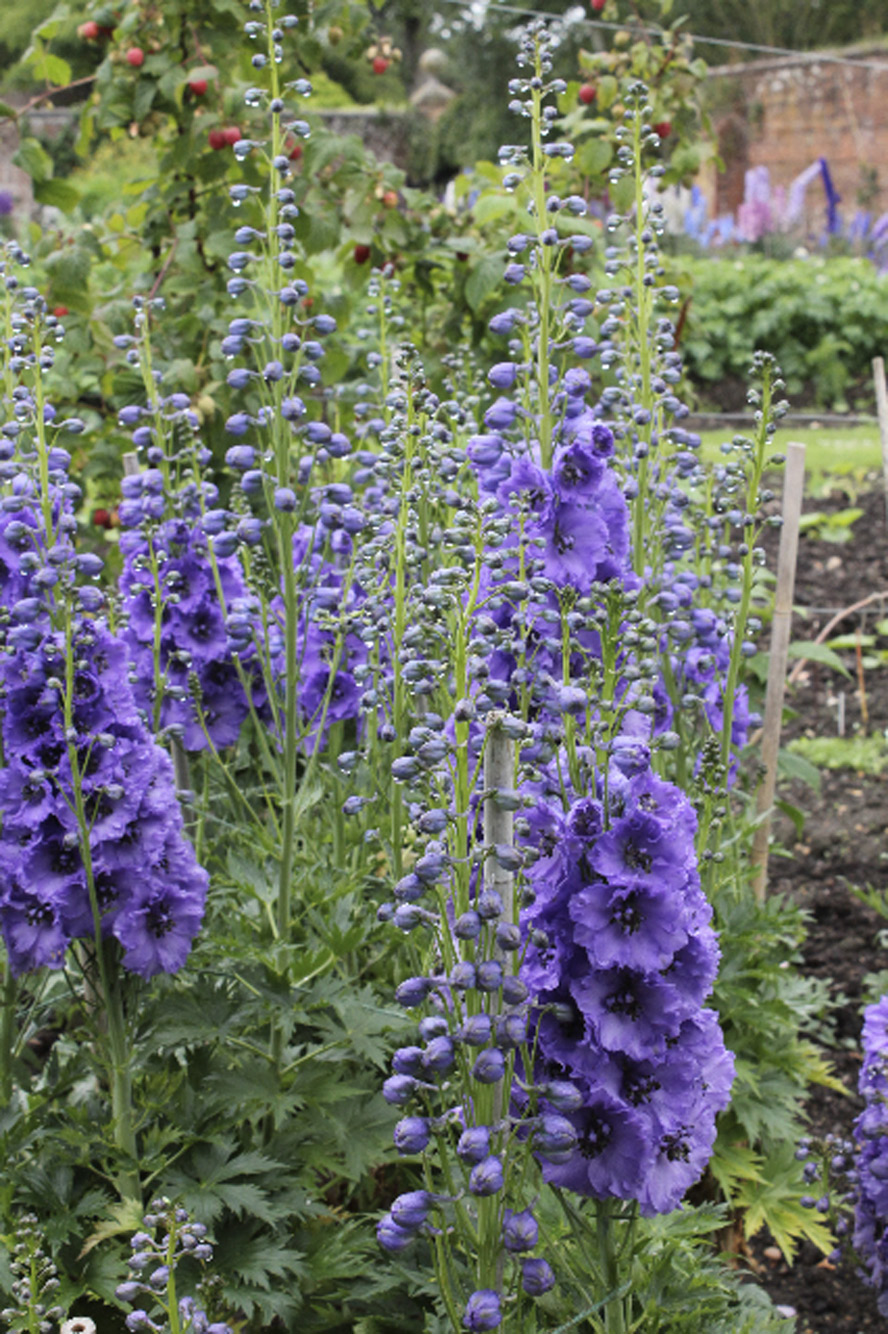 Delphiniums will need careful staking (but even then don’t always behave themselves, often ending up like a parade of drunken soldiers) 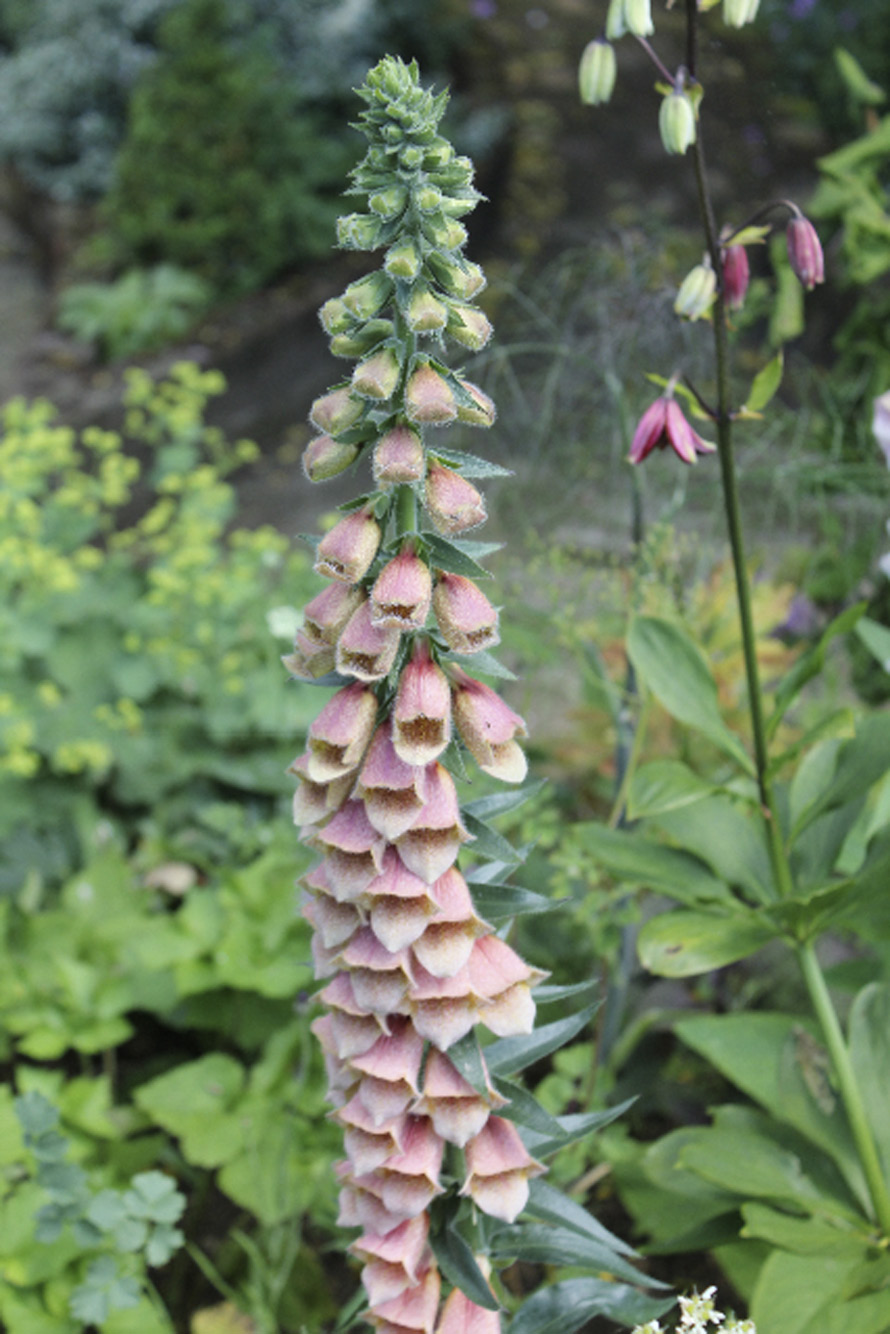 Foxgloves grow well in the shade 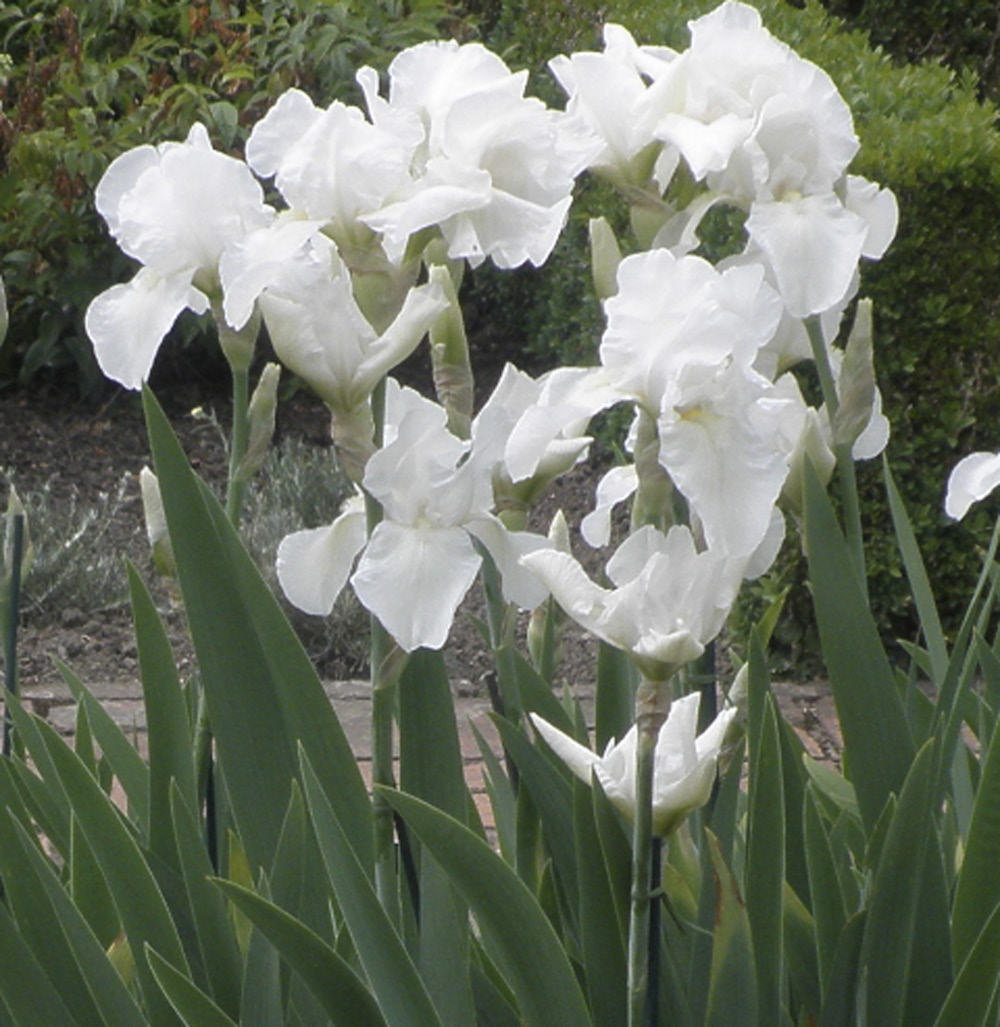 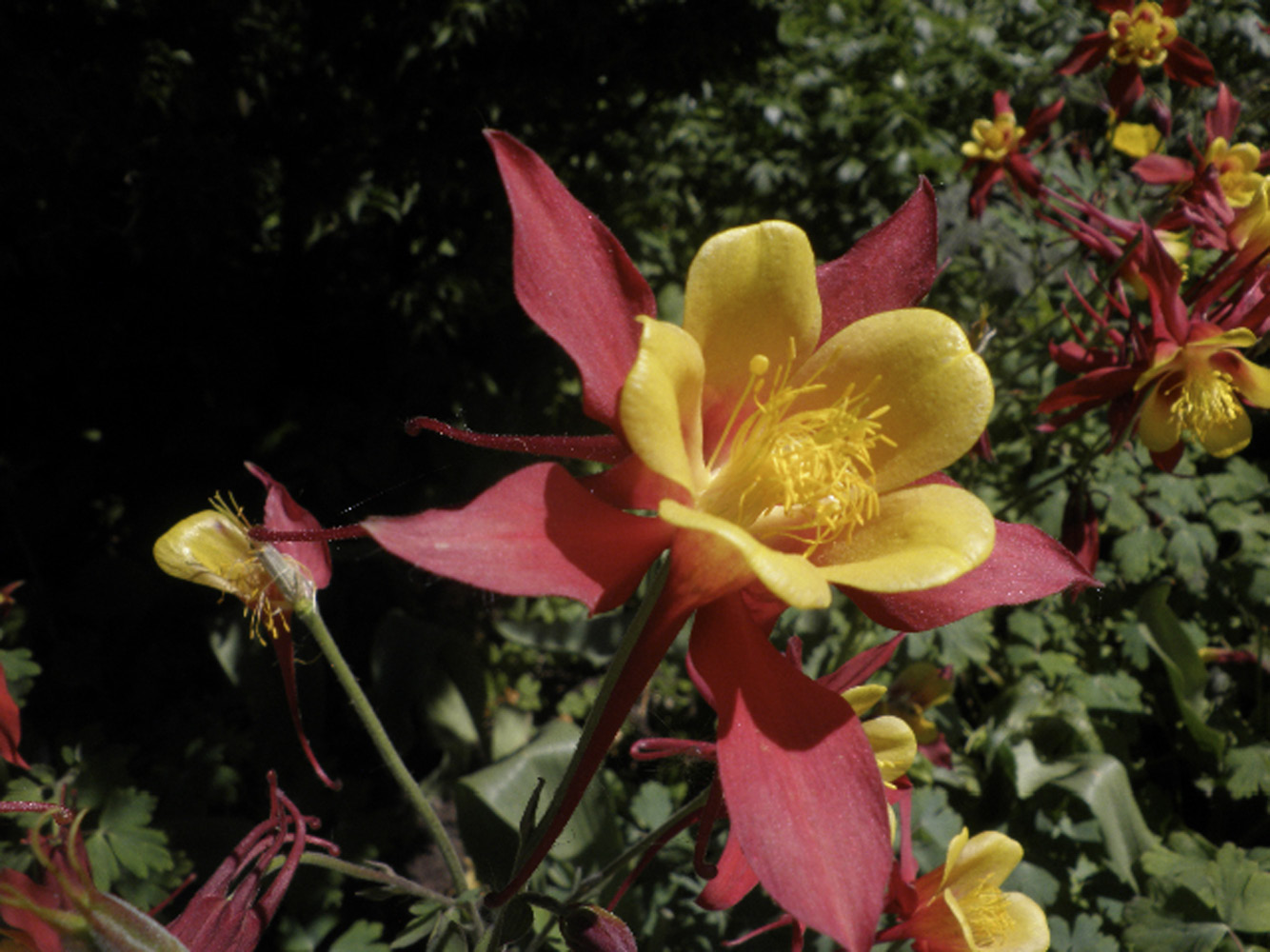 Try to remember to contrast the shapes and colours