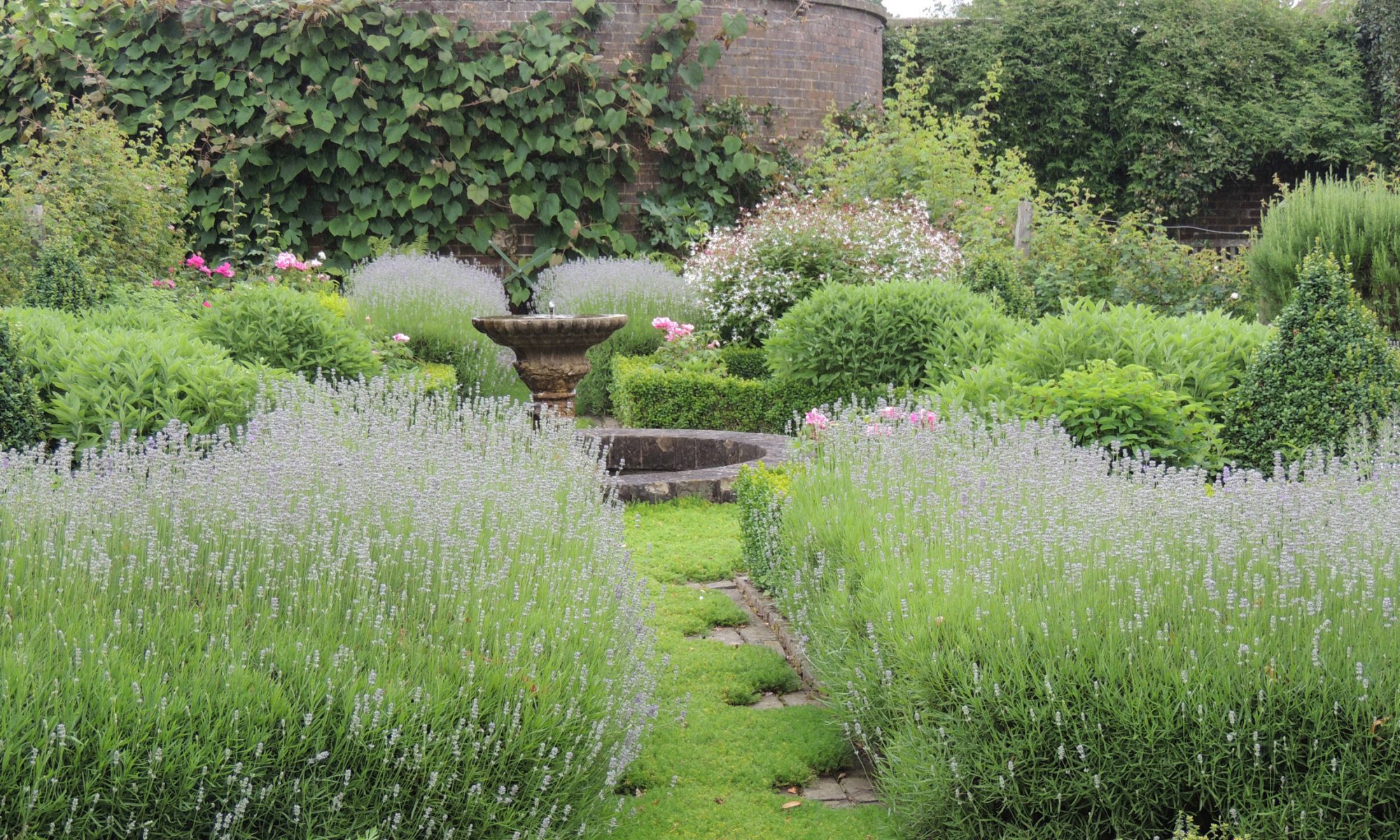 Lavandula (common name lavender) is a genus of forty-seven known species of flowering plants in the mint family, Lamiaceae, and surely must be one of the best known and versatile plants in the world.

I expect most of you know and have visited Winchelsea. I find the sun seems to shine on me on every visit there, and what a good place it is to see lavender. Quite a few of the houses have it growing profusely in narrow beds outside their gardens, perfect for us passers-by to enjoy and a couple of months ago when the Winchelsea gardens were open it was in full bloom. There’s an enchanting combination of a low growing pale pink rose, name unknown, valerian and a particularly floaty lavender (Old English?) outside a white house which I admire every year. It’s such a charming planting and one day I must knock on the door and find out more about the rose, let alone the lavender. I noticed today that the rose is still blooming, albeit in a rather desultory way, but the lavender is, for this year anyway, over.

And it was interesting to read Christopher Lloyd’s comments about lavender in The Well-Tempered Garden. He gardened on heavy clay at Great Dixter, not of course the perfect medium for lavender, and whilst he was happy enough to grow L. ‘Hidcote’ and favoured the silvery non hardy Llanata, he described lavender plants as ‘cherished eyesores’. He had a point in that from August to the following May, most lavenders, if not all, don’t really do much except of course they can, if pruned after flowering, make neat grey mounds which aren’t unattractive. But he’s right to say that they die off in dribs and drabs but never quite enough for you to give up and say ‘enough is enough’ and to rip the plant out, never to be replaced. Having said that, the lavender that edged his paths in the Peacock Garden were eventually consigned to the compost heap and replaced by low hedges of a rather underused plant, Aster lateriflorus ‘Horizontalis’ which flowers in September. But when lavender is in full flower, I think that the combination of an intoxicating scent and charming, pollinator friendly flowers, make them an essential ingredient of any garden whether it be formal or cottagey in style.

Where would you grow lavender and what are its needs? The first thing is SUN and lots of it, and the second, most vital element, is a well drained soil. Lavender is happiest on neutral to alkaline soil although the French lavender, L. stoechas (Mediterranean) does grow in the wild on an acid soil. Castle Farm nr. Sevenoaks diversified into lavender on part of their farm in the late 1990s as they had the perfect conditions to grow the plant i.e. a slightly alkaline soil and sunny, free draining slopes on the North Downs. They conduct guided tours from the end of June to late July/early August – the end of the season is rather weather dependent and varies from year to year. They grow Lavandula angustifolia ‘Folgate’ for a variety of uses including kiln dried decorative cut bunches and for soothing lavender oils. Back in 1998 they bought three plants of a French variety of lavender called L. ‘Maillette’ which by the following year they had micro propagated into 24,000 plants and which has a particularly strong and beautiful scent and they also grow Lavandula x intermedia ‘Grosso’ for its lavandin oil. 95% of the lavender grown in France is lavandin which is a strong growing hybrid cross intermedia and which also has a very distinctive scent, 10/12% of which is camphor. Lavandin oil therefore has totally different properties to lavender oil in that it is definitely not soothing and sleep inducing but rather a stimulant. It is excellent for combating drowsiness, perfect for deterring mosquitoes and ideal for warding off the ubiquitous clothes moth.

Lavenders thrive on a lighter, more alkaline soil but if you are desperate to grow it and your soil is pretty acidic, you can raise the pH by adding lime in the spring, a handful per square metre would help. However, I sometimes wonder whether it is best to cut your losses and stick to plants that flourish in the conditions you can provide. You know, this thing about ‘right plant, right place’. But if you are set on growing it, you could also add grit to the planting hole and plant on a slight mound. What will surely kill off lavender is wet winter and soggy soil. Lavender is a good candidate for pots – just use a soilless medium like John Innes No 1 or 2, add some grit and a bit of slow release fertiliser and you should be alright. Half hardy varieties need little or no watering between, say, November and the following February and would appreciate being sheltered away from the winter elements during that time.

We are so lucky to have Downderry Nursery so near. Have you ever seen their astounding displays of lavenders at the RHS Chelsea Flower Show? Downderry hold National Collections for both lavandula and rosmarinus and it is possible to visit there to both learn about the history of and the uses for lavender. And of course their collection of usual and unusual varieties is huge. I’ve asked them for advice on which variety to plant in the past and not only are they particularly helpful, they can usually provide the plants too. There are so many interesting varieties to choose from as well as some less usual which, more often than not, are tender. L. canariensis is particularly choice and as the name suggests, it comes from the Canary Islands. It combines a lacy foliage with sapphire blue flowers.

The Mediterranean lavender, L. stoechas, comes in all sorts of forms and if kept dead headed, has a long flowering period. I found twenty-five different varieties listed on a nursery website the other day. The scent of L. stoechas is rather different to that of the L. angustifolia varieties and the shape too. Its main flowering season is May and the plant has curiously square heads with its petals lined up on the corners of the square. This arrangement is crowned with a tuft of bracts on the top.

Finally, should you want to propagate lavender, you can really do it any time during the growing season but the optimum month would probably be September. Take cuttings just below a node, dip them in a rooting compound and pop them into a gritty compost or horticultural sand. You can just keep a bucket of hort. sand somewhere in the garden and pop cuttings in it when you have a mind. Just water them in and keep them sheltered – in a cold frame or something similar if you have one. You’ll know whether they have worked when they start making shoots the following summer.