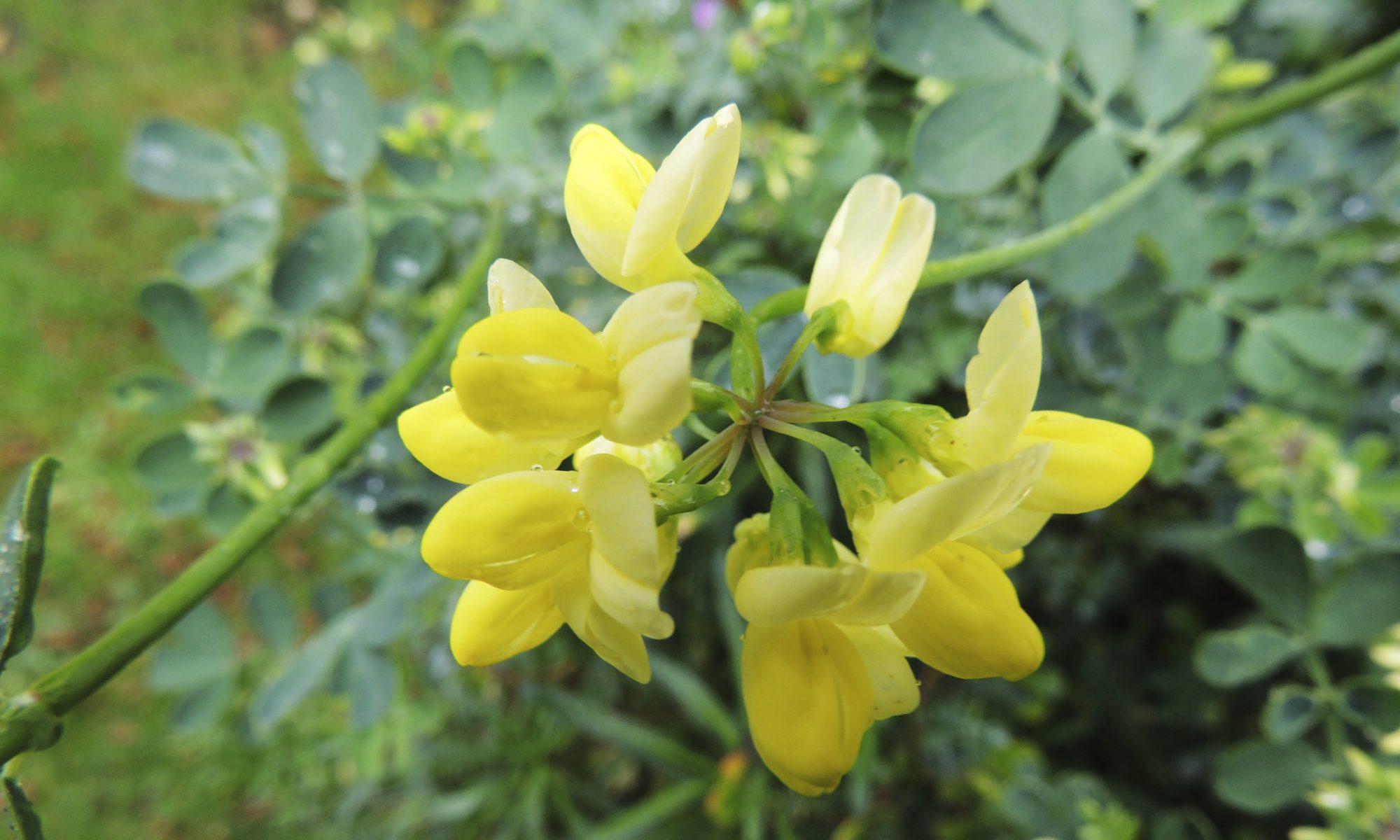 Buds are already forming on the Sarcococcas ready to burst into flower just when it seems that nothing else will. And this small genus is really my Number 1 amongst winter treasures. It should be compulsory for all of us to have a Sarcococca planted by our doors or beside a well used path so that in the middle of winter we can enjoy clouds of perfume as we pass. And if we’re clever we can use different species and their cultivars to provide scent from dark November through until March.

These plants grow in the wild in Asia, in the main in China and up in the Himalayas. Two of the newest discoveries were made by Roy Lancaster, Plantsman Extraordinaire, in the 1980s. They are S. orientalis and S. ruscifolia var chinensis ‘Dragon Gate’ – the latter was spotted by him in a gateway in the Yunnan province.

Years ago, he was one of the lecturers on a course at the Chelsea Physic Garden and I remember him taking us across the Royal Hospital Road and straight into a tiny bijou Chelsea front garden where we huddled in a group feeling a bit sheepish, to inspect the shrubs growing there. You could see that he had no fear as far as plant hunting was concerned, even in Chelsea.

The variety S. ruscifolia itself is a bit of a boon for anybody whose box hedges are suffering from blight and needs an alternative as its low growing habit is ideal for hedging. Red berries follow the winter flowers and, as with many of the Sarcococcas, they often remain on the plant until the next season’s flowering period.

My favourite is S. confusa with its combination of pure white flowers and an arching habit.

And then there are the Daphnes, also fragrant, some highly. Don’t make the mistake of planting them at the back of the border and then regretting it as they really don’t like to be moved at all. Their roots are very deep and if you attempt to move them there is no chance of doing so without severing their root system. Daphnes, carefully chosen, as with the Sweet Box (Sarcococca) will give you great wafts of fragrance for several months.

But which to grow for winter flowering? D. bholua ‘Jacqueline Postill’ has wondrously scented pink blushed white flowers, with spicy hints of the East which is appropriate as D. bholua grows in the wild in Nepal and beyond, but I must admit that it isn’t a handsome plant once its flowering season comes to an end. Its leaves have a tendency to turn yellow and then it moults – one of its parents is deciduous which explains a lot. Maybe you’d prefer an evergreen cultivar – both D. bholua ‘Peter Smithers’ and D. bholua ‘Penwood’ are fabulous, the latter has lovely rich purple buds and large flowers.

And then there is the little treasure, the Algerian iris, which is always a bit of a surprise as its flower looks as if it should be in full swing in a summer garden, or at least a spring garden. As it comes from North Africa, Iris unguicularis is happiest grown in full sun to enable its rhizomes to bulk up and store energy for its next season. Any old dry spot, at the base of a wall perhaps, will emulate their native growing conditions. The foliage is pretty scraggy but you can cut this down to the base in early winter. The plant buds up around about Christmas time and flowers on and off for weeks. It seems that this intermittent flower production is a ploy to avoid being zapped by frost as whilst the buds are frost proof, the flowers are not. Cultivars to look out for would be ‘Walter Butt’ which has a lovely pale blue scented flower and is pretty floriferous and also ‘Mary Barnard’ as the leaves tend to be shorter and its deep purple flowers are really striking.

Coronilla valentina subs. glauca is a lovely little shrub and mine has just started into flower again in mid October. I hadn’t even noticed the buds despite walking past every day to feed the hens but it is flourishing despite being rather overwhelmed by its neighbour, anErysium ‘Bowles’ Mauve’ which I keep meaning to take out but then haven’t had quite the heart.

Coronilla is a member of the pea family with evergreen glaucous blue grey leaves and pea-shaped fragrant flowers. It’s a Mediterranean plant, first introduced to this country in Elizabethan times and popular with the Victorians who grew it in their great glass houses for use as a cut flower. The cultivar, ‘Citrina’ is particularly nice as its combination of pale lemon flowers and grey green leaves work well together. It’ll flower now for weeks and then on and off throughout the year. Planted in a sunny position and given good drainage, it should last for at least five years but tends to get leggy eventually and doesn’t appreciate hard pruning to shape up the shrub. It’s worth taking a few cuttings in late summer so that you can eventually replace the parent shrub.

Wafts of lily of the valley scent greet you as you wander past many of the mahonias (pictured above) – stalwarts of the winter garden. One of the most fragrant is M. japonica which makes up for its lack of looks! Individually the flowers on a mahonia are small and either bell shaped or globular but as they open up gradually from the centre of the plant and are held on racemes of different lengths their flowering season is a long one and the flowers are very popular with early flying bumble bees. It is worth mentioning Mahonia lomariifolia despite it being slightly tender as not only does it have a distinctively long and particularly decorative leaf but it is a parent of excellent hybrids such as Mahonia x media ‘Buckland’ and ‘Winter Sun’. The latter has bright yellow flowers and reaches quite a height. ‘Buckland’ is one of the first to flower and takes its great burst of flower from its parent. Actually it is an absolutely stunning plant with racemes of flower reaching up to eighteen inches long. I love the fact that the leaves colour up in the winter as an added bonus.

If you want to be cheered up in February, grow a Cornelian cherry or Cornus mas. It’s a deciduous shrub whose fragrant little flowers appear long before the leaves burst into life. It is always such a surprise to see one in full flower as it just glows on a dark day. Masses of tiny flowers are in small umbels held on tiny twiggy side shoots and are particularly floriferous especially on the choice cultivar, Cornus mas ‘Golden Glory’. This one flowers as an immature shrub and is worth planting. Fruits appear later in the year on Cornus mas but only if you’ve got the shrub growing away in a warm place. They’re red, hence Cornelian cherry, but need a gallon of sugar to make them edible in preserves. There are quite a few variegated versions. ‘Variegata’ has grey green leaves with a thick white margin which makes the shrub stand out in the summer.

‘Aurea’ too with yellow leaves is good news. Both of these are slower growing and less vigorous than Cornus mas which would suit a smaller garden. A tip is to grow them in front of a darker background, perhaps yew or holly so that they show up when they are in full flower. There is a good specimen to look out for at Hole Park in Rolvenden. 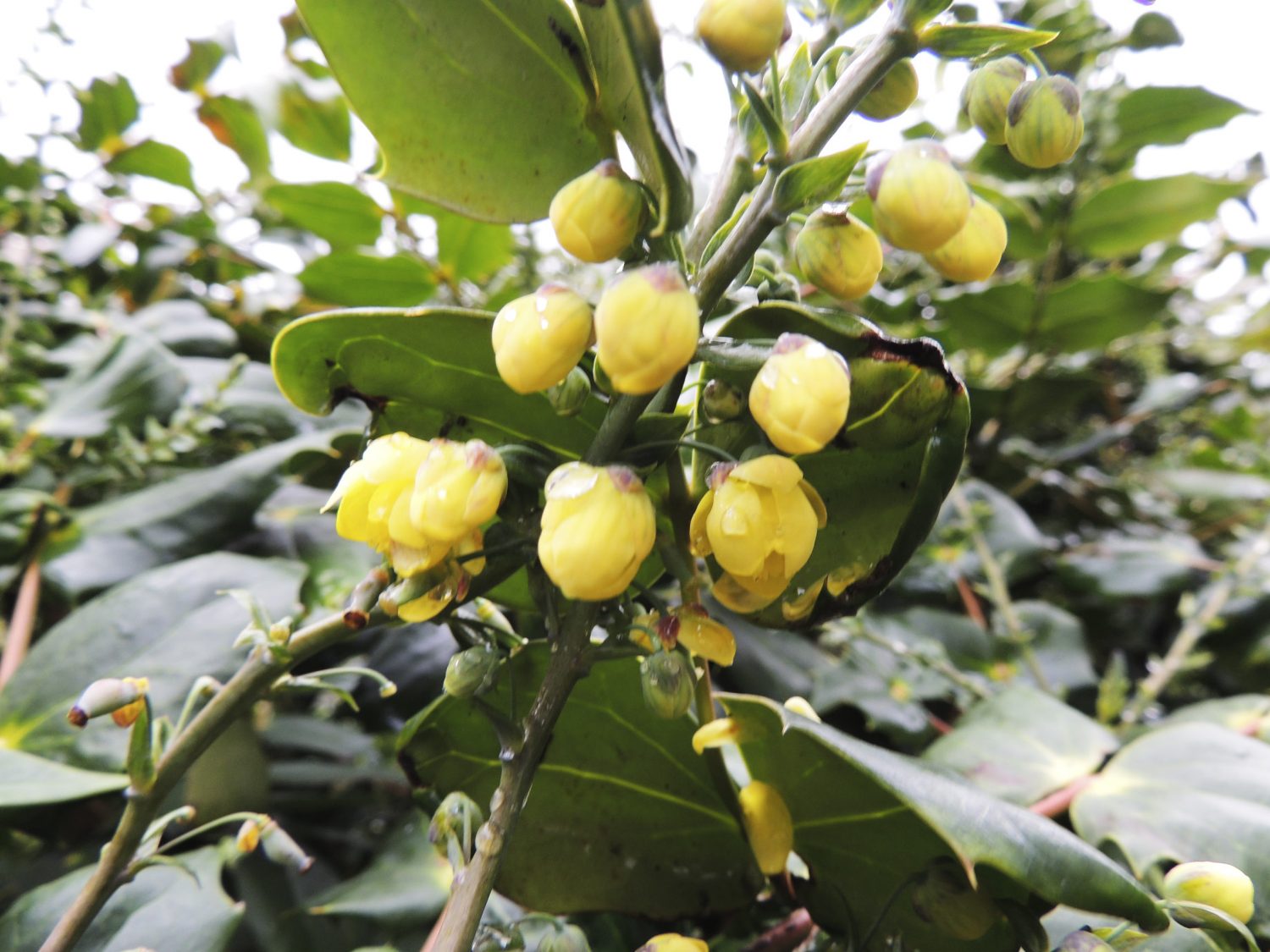