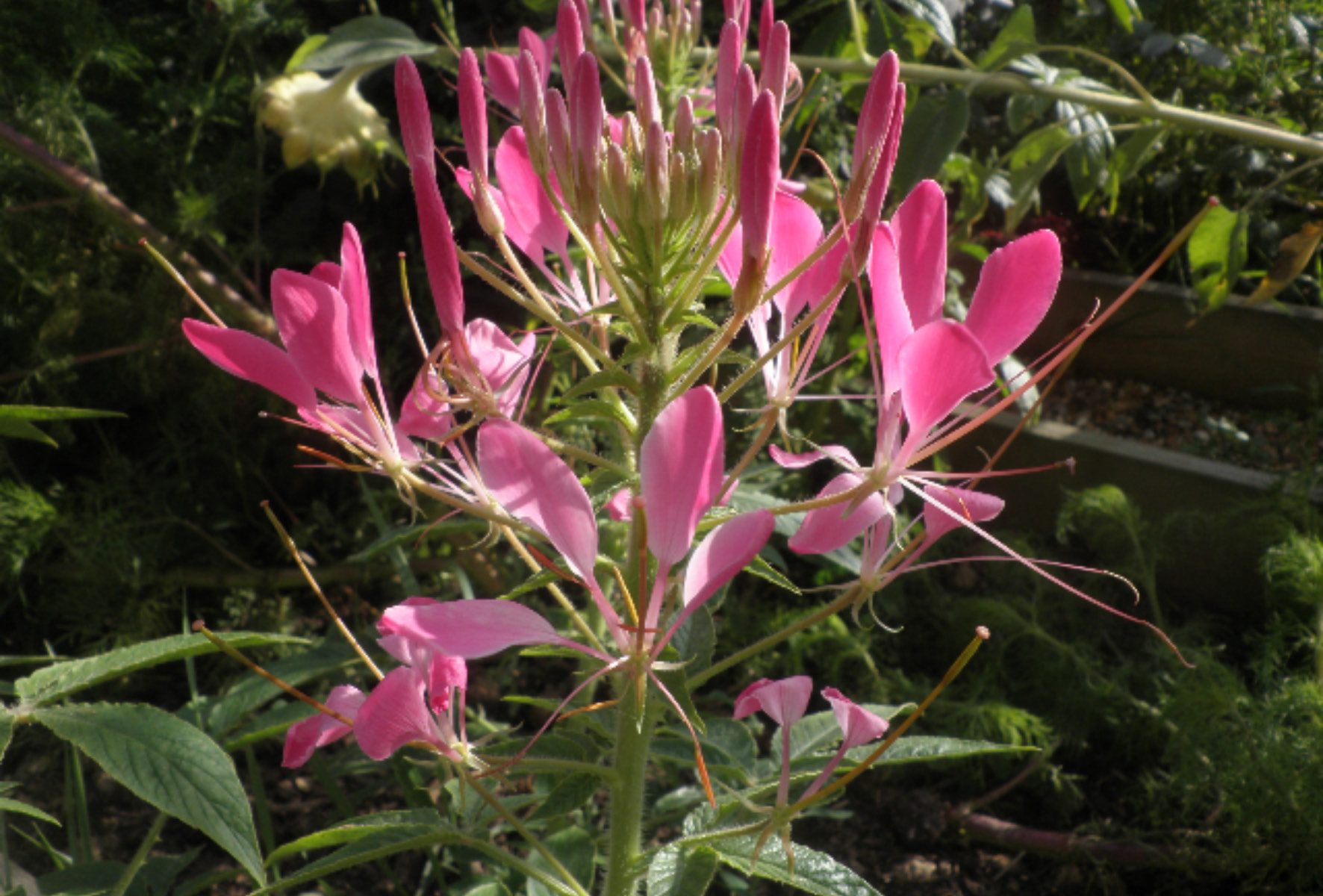 How gorgeous the garden is in June. Growth is strong and lush; there’s already been masses of colour from bulbs, blossom, and early flowers, and the cottage garden perennials – Lupins, Geraniums and Delphiniums etc are just about to reach their happy peak. Life could even be a bed of roses.

But what will happen after that? I don’t want to rain on the parade (sorry, wrong metaphor, as just a little rain, at night obviously, would be fine), but once the June rush is over, we still have yards of summer to fill and some of the late summer colour doesn’t start arriving until, well, late summer. In the past (I think I’m talking large public gardens and the distant days of cheap labour and under-gardeners) the bulbs and spring bedding were hoicked out and replaced by summer annuals – and more bedding. These days there are less labour intensive (and, I’m hoping, less bedding based) strategies to plug the gaps and keep the summer show on the road. So let me show you how, with a few tricks and a smaller amount of work, your garden can drift seamlessly and colourfully through the summer.

It sounds obvious, but choosing plants that flower over a long season will make a big difference. So think carefully about how much space you want to give to ‘one hit wonders’, unless they’re truly wonderful, or have Proustian significance in your life. Peonies teeter on the edge of my list here. I usually let them in on grounds of pure fabulousness, but they do leave a large mound of foliage in their wake. Some Roses are similar. Delphiniums, Geraniums and Lupins however, appearing at the same time, are let off, as they can be cut back to the ground. If you do this immediately after flowering they’ll give another (smaller) show of blooms at the end of the summer. There are some plants, however, that just don’t know how to stop flowering and will carry on right through from June until the frosts. My top three are Verbena bonariensis, Gaura lindheimeri and Geranium ‘Rozanne’. They will mix well with other perennials and continue to look good later on with grasses and early autumn plants too.

This is easier said than done, mainly due to the vagaries of our climate, but the theory is that you plan the border so that one group of plants seamlessly takes over from another as the season progresses. You need a wide border to do this – at least 2.5 m or so deep so that 3 tiers of plants will happily co-exist. Then one group is always in full flower – with the other two either coming or going (‘one on, one in the wash and one in the laundry basket’ type of thing). The problem with this is that our weather can delay or speed up flowering by as much as three weeks and cause these well timed plans to go astray, but in principle it works. I tend to use this succession approach earlier in the year with spring and summer bulbs, so that their unsightly foliage – which should be left on (annoyingly) to help the bulb bulk up for next year’s display, is hidden by a froth of flowers and foliage growing up next to (and then on top of) them. Try Alliums with Geraniums or Alchemilla mollis. Bulbs, despite the foliage issue, are useful plants to use in the borders (with the exception of giant daffodils which will really clog up the place with flopping leaves). They don’t take up much space and pop up, do their thing and disappear again, so there’s always room to squeeze in a few.

If there’s space – perhaps in the gaps where spring bulbs were flowering, or after you’ve cut back something – you can inject some annual colour. The great thing about annuals is that they’re straightforward. An annual’s job is to flower, set seed and die; there’s no other agenda (unlike with some plants that definitely have more dubious ideas). If you can prevent them from setting seed by deadheading, then they’ll keep on flowering. Annuals are happy-go-lucky plants, but they only last a season and the process of planting them out in the borders each year can be labour intensive. I like to use Cosmos in sunny spots and Nicotiana in the shade, but have to sow them afresh each year because they’re not frost hardy. The low maintenance approach would be to sow hardy annuals – things like Nigella (Love-in-a-mist), Larkspur, Amni majus and Orlaya grandiflora, as, with any luck, these will self-seed and save you the bother for years to come.

There are some imaginative ways to use climbers to enhance and extend the season. Try growing them through shrubs; using a sturdy plant for support is exactly what they would be doing in a natural situation. Use lightweight climbers like the later, large-flowered Clematis or even annual climbers like Morning Glory or Mina lobata. If there’s a large gap to fill, a wigwam of Sweet peas will add low cost annual colour while you think of something more permanent to grow there. Some climbers can even be left to ramble through the border; just make sure they don’t strangle their companions in the process…

Large pots brimming over with summer annuals and bedding plants, or a single spectacular shrub can be used to divert the attention away from a dull border and can be placed strategically around the garden to act as focal points. You can even tuck them right in among your plants for an in-border boost – this is a useful trick and effective with pots of summer bulbs like Lilies and Agapanthus – just slide the pots among the existing foliage and remove once the bulbs have finished flowering.

‘Green is a colour too’. Irritating but true – and used effectively, foliage can be as striking as flowers. Dense, small-leaved shrubs like Box or Osmanthus will help ‘hold’ the border together as flowers come and go. Even individual leaves can be used architecturally too – large-leaved plants like Fatsia japonica, Rheum palmatum, Ligularia and Hostas will give dramatic impact in damp shady sites. Variegated foliage is also useful for lighting up dull corners and some plants with coloured foliage – Heucheras, annual Atriplex hortensis rubra, are (almost) as good as flowers. Strong vertical shapes – the leaves of Iris, Phormiums and grasses – create contrasts, texture and movement within the border.

It’s easy to forget, especially at this time of the year, that many well known herbaceous borders don’t reach their peak until late summer. Make sure that there’s room in your borders for the late summer flowers like Dahlias, Asters and Rudbeckias and then don’t despair if there’s a momentary gap – just think of it as the garden gearing up for a grand finale. 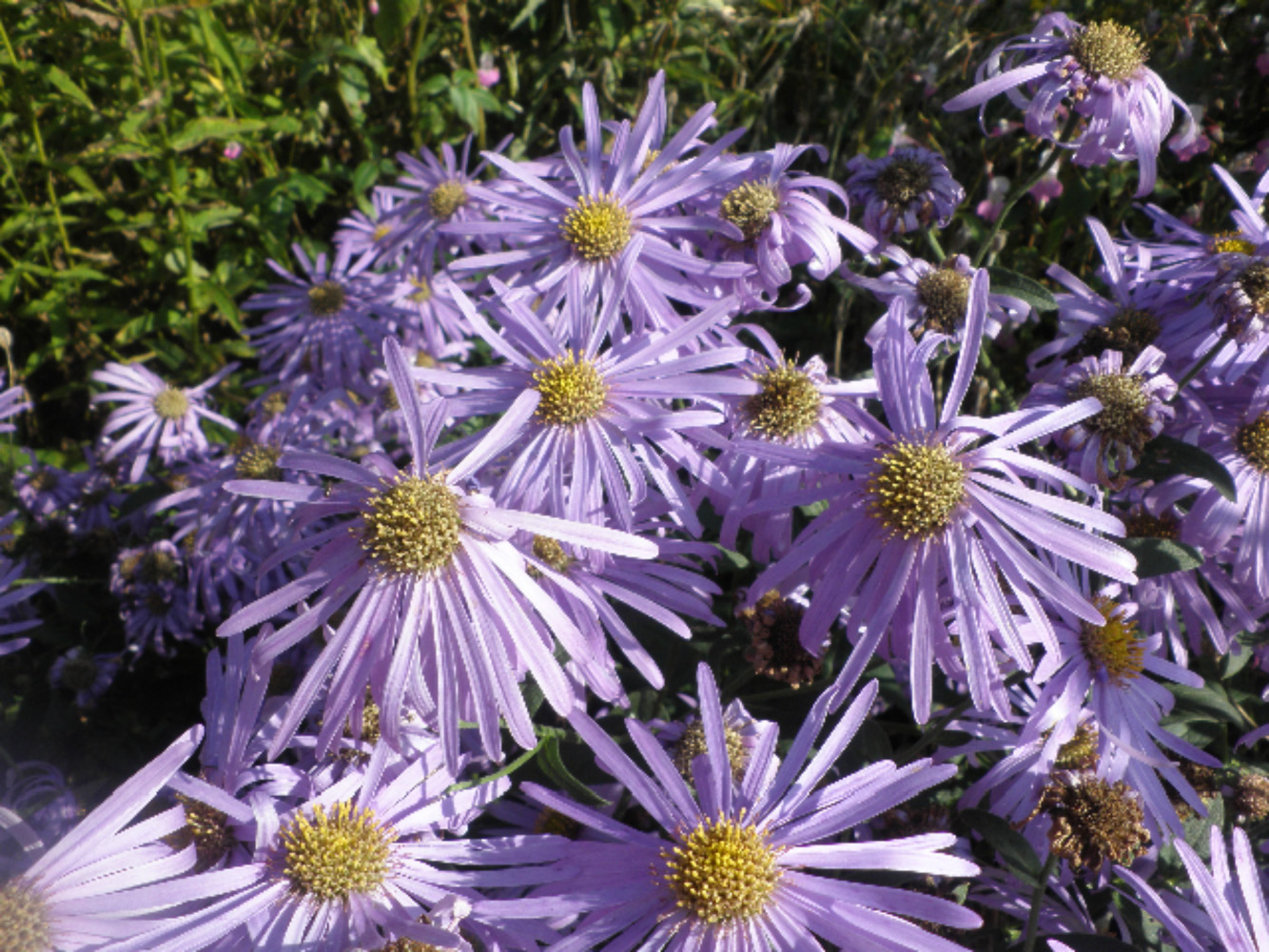 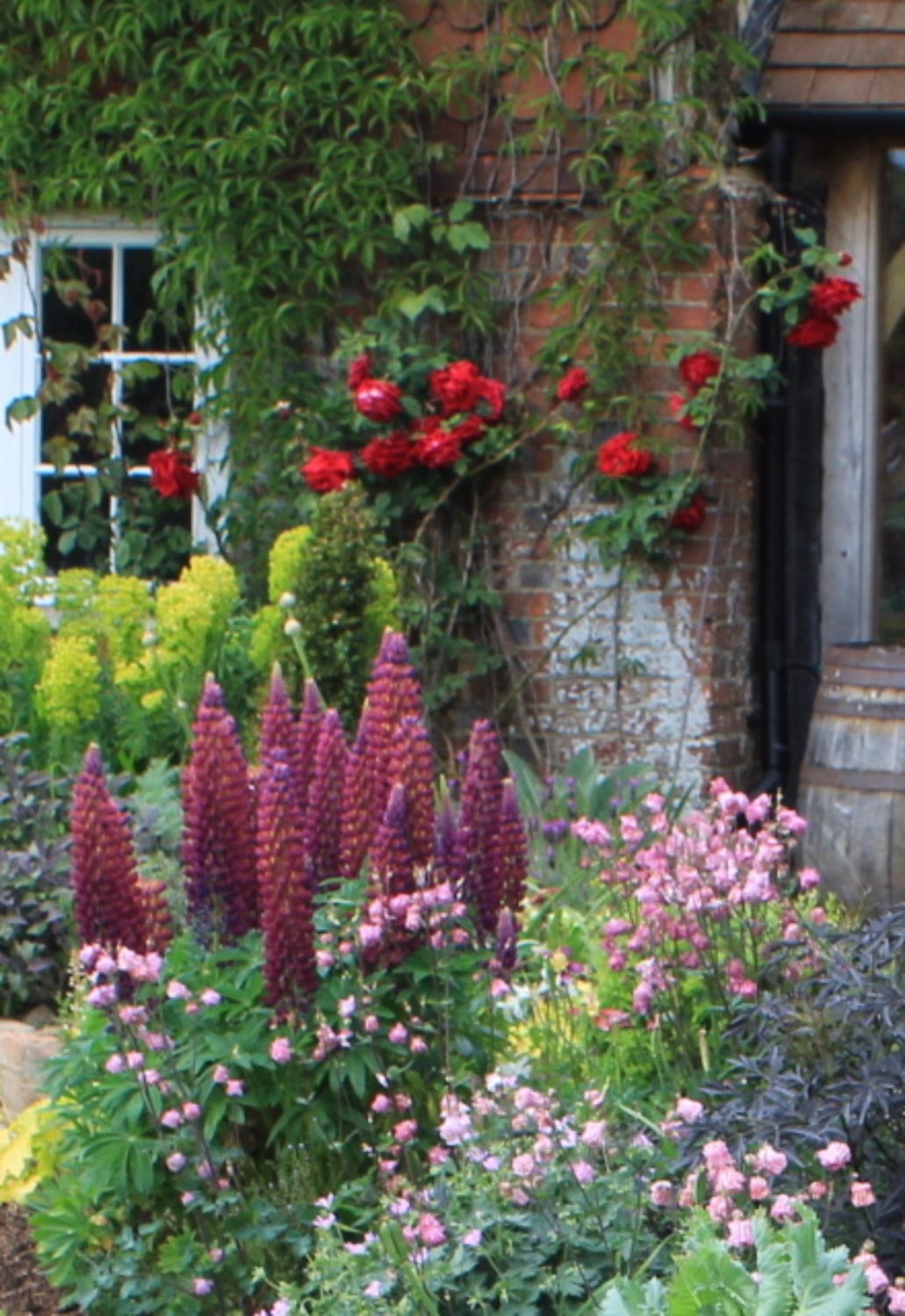 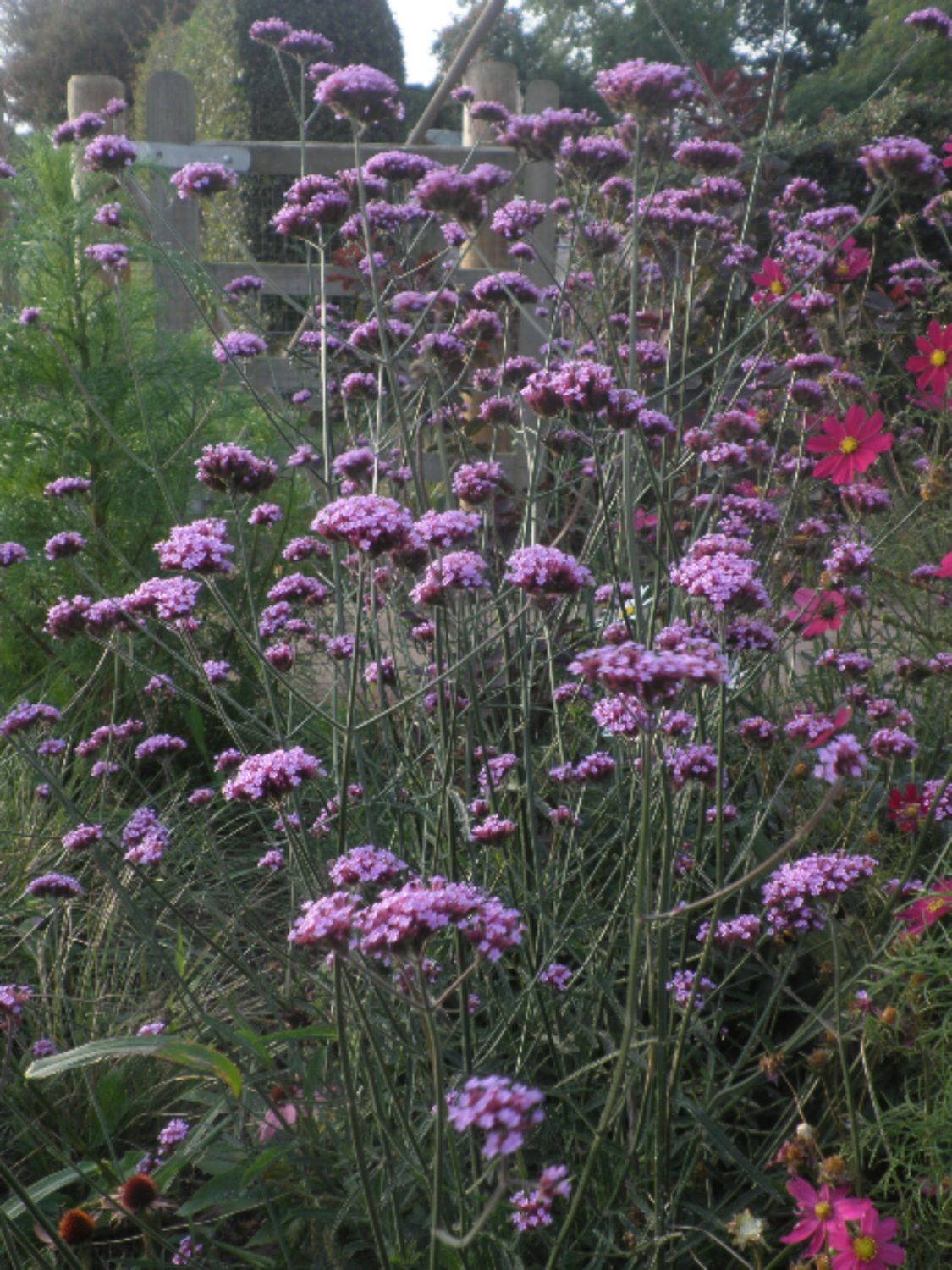 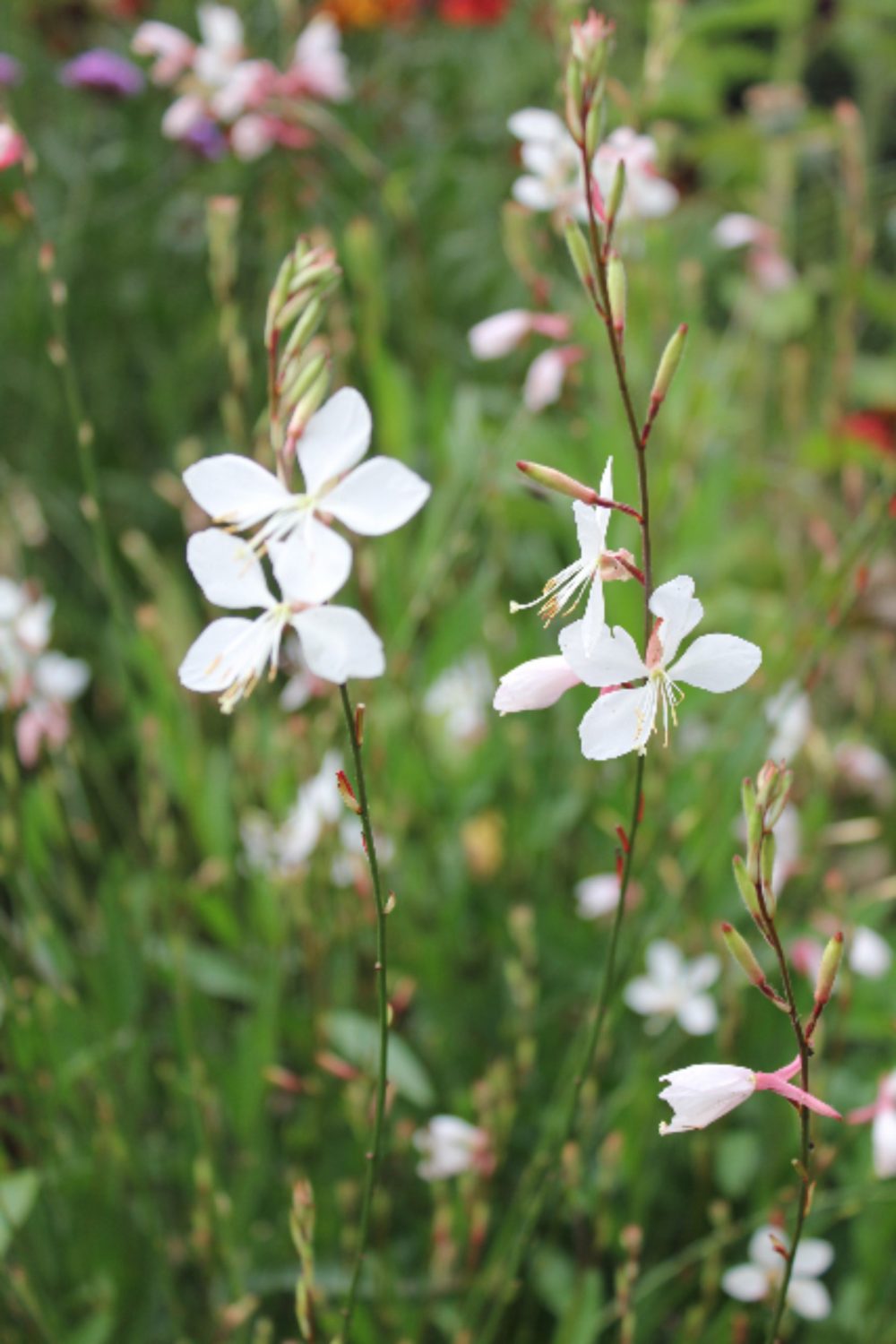 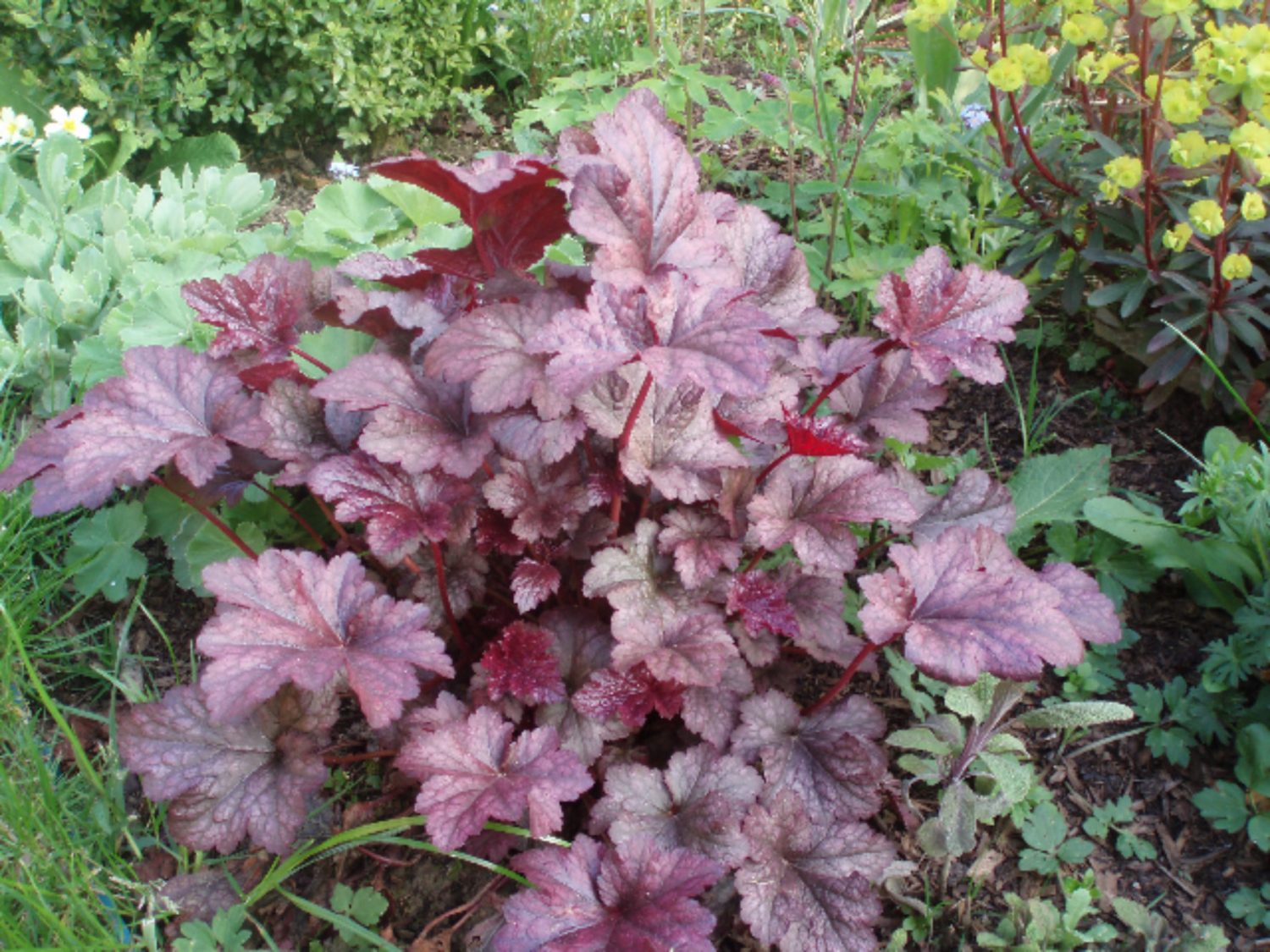 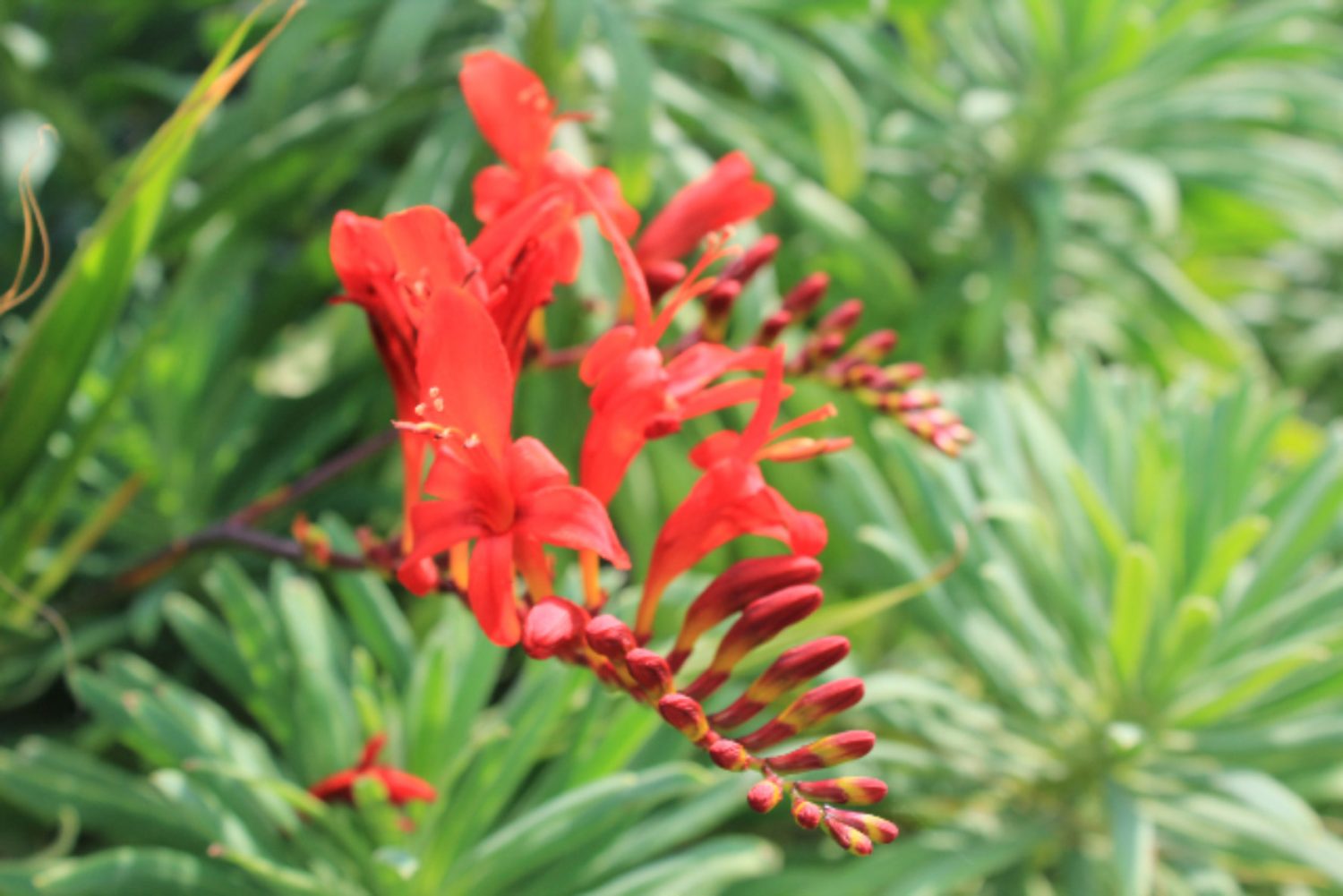