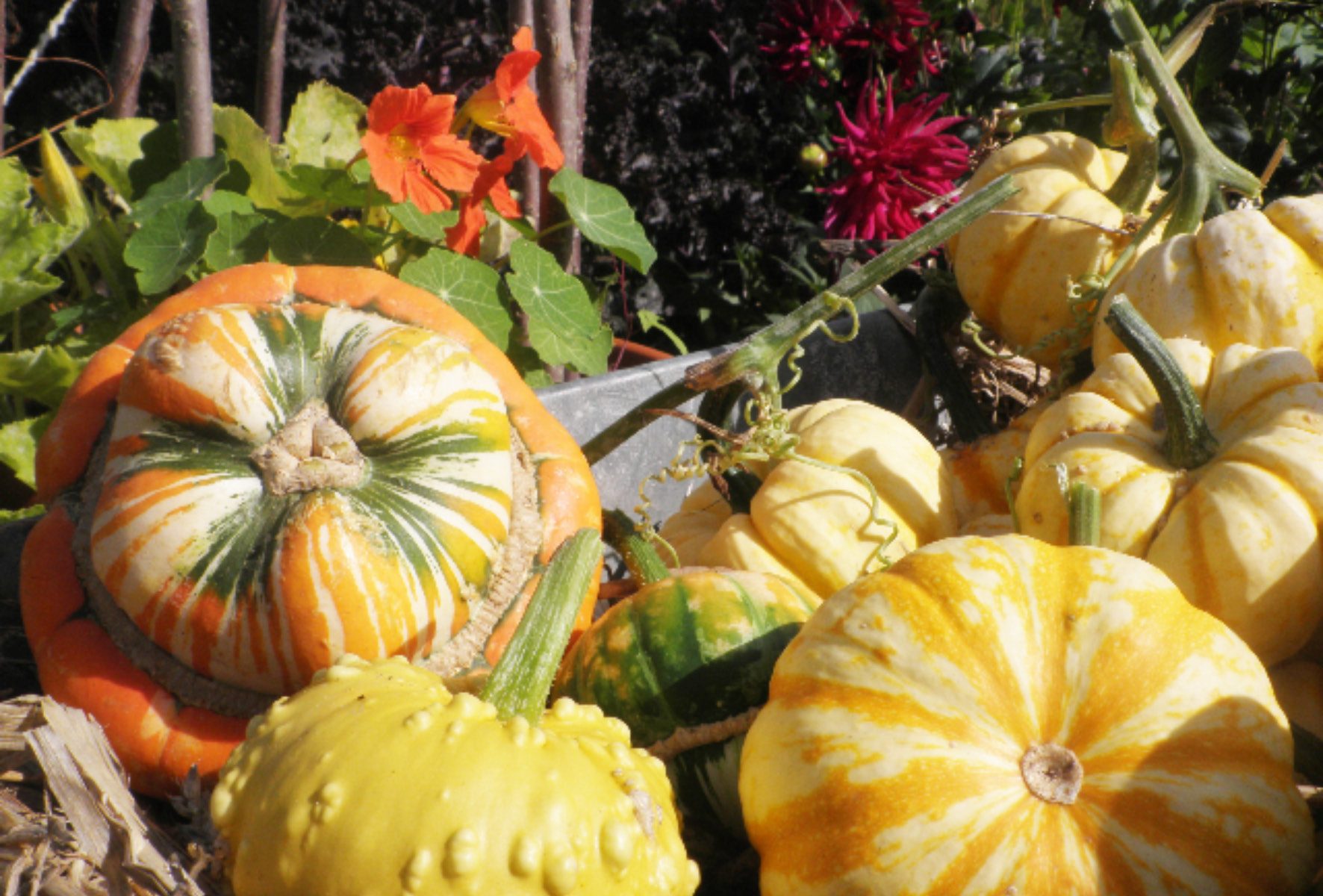 Did John Wyndham grow pumpkins? For if ever there was a plant to inspire a science fiction book about menacing plants, a curcubit (the official name for this family) would do it. There’s definitely something sinister about the way they rampage about the place, with their searching, strangling tendrils… But don’t let me put you off with disturbing thoughts of killer plants. If you have room on your plot for them, they’ll end up being monstrous, but deliciously so.

All pumpkins are squashes really (but not all squash are pumpkins), so don’t worry too much about the exact definition. More important is to work out which ones are good to eat, which to hollow out and which to just pile up decoratively somewhere. First to be ready for eating are the summer squashes, which include courgettes and patty pan squash (like mini flying saucers). These are fast maturing and prolific and have softer skins. That makes them perishable so eat them as they grow. Pumpkins and winter squash have a tougher outer skin or rind, which means that once ripened, they’ll store for months.

These have the toughest rinds of all and not much flesh within them. Some gourds are edible, but most fall into the decorative, or ‘what’s the use of that then?’ (to quote my husband) category. I always grow a few ornamental gourds, because they’re so attractive – and they do have a use, even if it is only to sit prettily in a bowl. In more exotic countries they’re used to make interesting things like maracas and I gather some are worn most imaginatively (by the men) in several tribes in Papua New Guinea (yes, it is what you’re thinking).

It’s a bit too late for growing Curcubits from seed now, although you might still find some plants languishing around at a garden centre or village fete, desperate to be freed from the confines of a pot (they’re not container plants), and let loose in your garden. This is the ideal time, however, to see them in all their sprawling splendour as they slow their romping and begin to swell their fruits.

Pumpkins, gourds and squash are not frost hardy – sow either under cover in April (one or two seeds to a 9cm pot) to be planted out once the danger of frost has passed, or plant seeds directly into the soil from mid May onwards. Grow in an open sunny, fertile spot, preferably not right next to a delicate, easily swamped crop, as they will need a considerable amount of space. Plant them however you like – if you’re a stickler for nice neat rows you may have to avert your gaze as they disregard all boundaries and merrily romp around. The smaller squashes and gourds can be grown up sturdy obelisks/arches (and can look very attractive grown this way, but make sure you keep them well supported). The larger ones just need space to ramble along the ground, as their fruits can be too heavy for the stem.

Prepare the ground by adding some manure or compost. They’re a greedy bunch and will need plenty of watering and feeding to ensure that the fruits get to a good size. You may see pumpkins and squash being grown on large compost heaps, which suits them very well, as they need rich deep soil and the warmth of the heap will also help with growth and ripening. Watch out for pests like slugs and snails on the young growth, but once they’re established and growing strongly no snail will catch them up. Feed with a high potash fertiliser once they’re in flower and water well, especially as the fruits start forming. If you’re growing any of the larger varieties you may need to make them a ‘nest’ of straw for the fruits to rest on to prevent them from coming into contact with damp soil.

There is an effective (but rather messy) ancient American Indian combination of sweetcorn, climbing beans and squash called ‘The Three Sisters’ which not only makes the most of the available space by growing three crops in one place, but they actually benefit one another. The sweetcorn is a support for the bean, the bean fixes nitrogen into the soil and the squash creates shade at the roots and suppresses weeds. All three need the same rich soil and so in theory are ideal companions. In practice I find that they show no respect for one another (like true sisters) and all end up in a tangle (but a pretty one).

Your crop will be ready to harvest in the autumn (in good time for Halloween) and suitably autumnal they’ll look too, although orange is not the only colour. Let them ripen in the sun where they’re growing for as long as possible, but bring them in before the first frosts. Once harvested, they’ll store for weeks, as their tough outer skin will protect them (and you) from the groaning glut that accompanies un-storable courgettes and their other summer cousins. 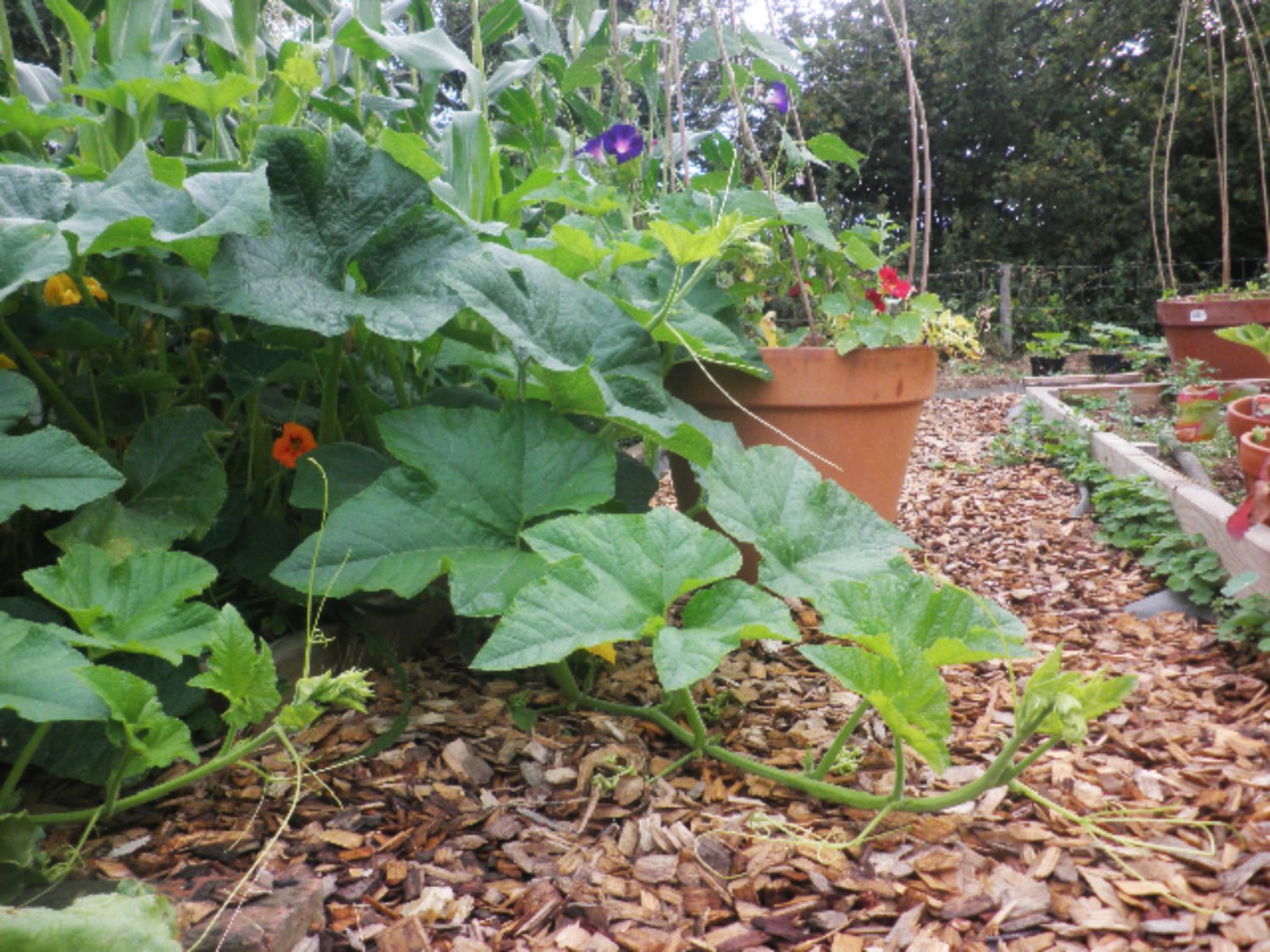 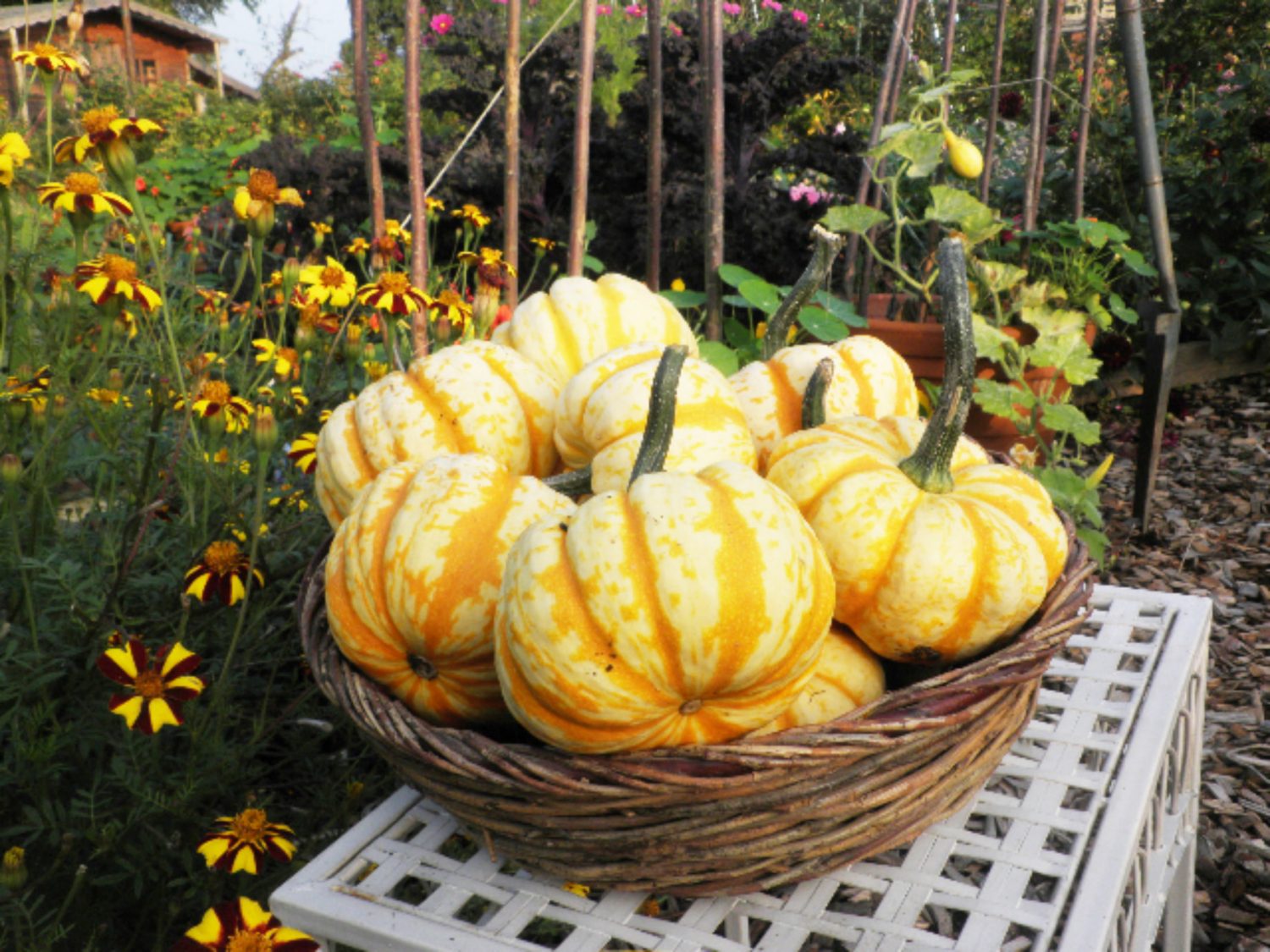 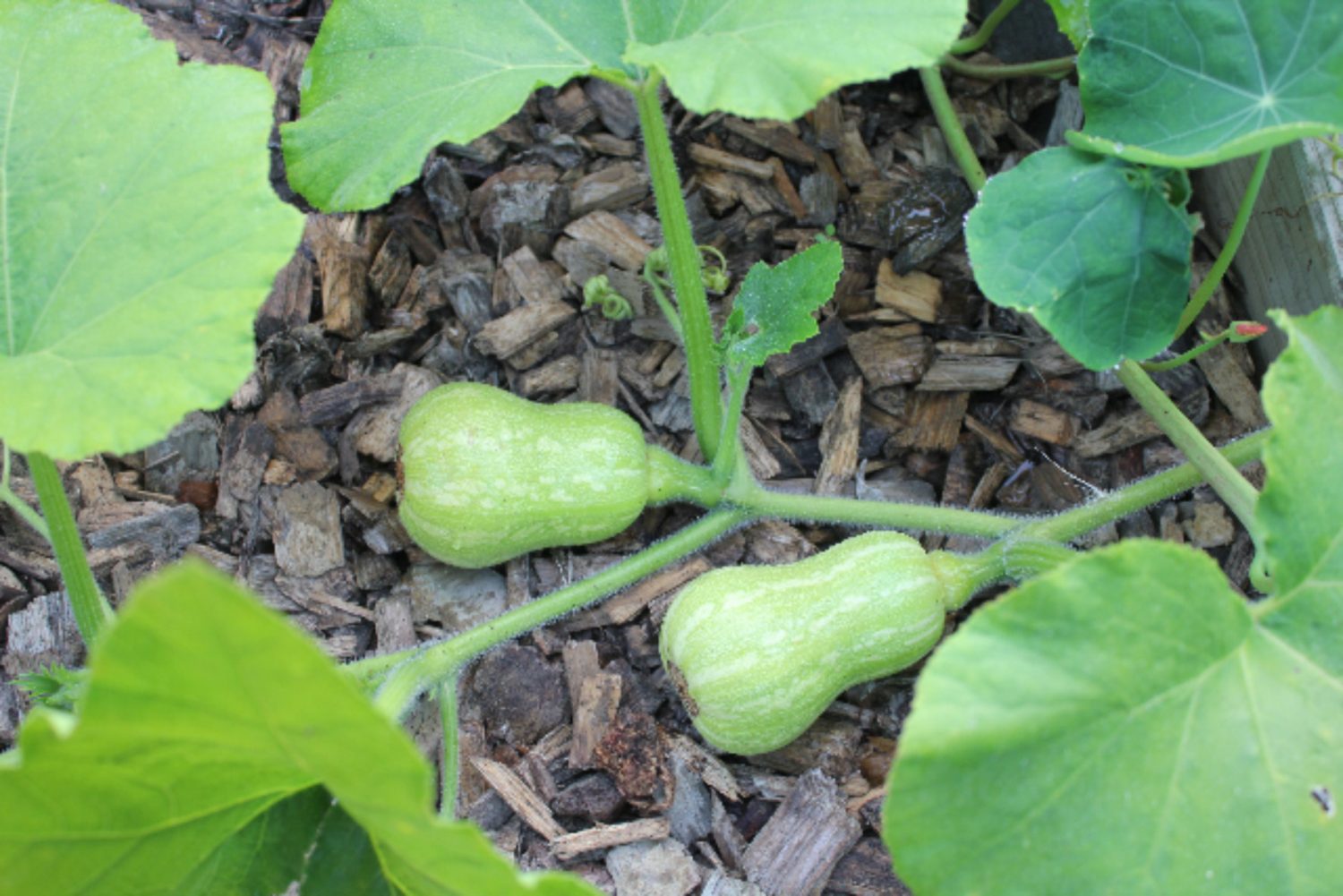 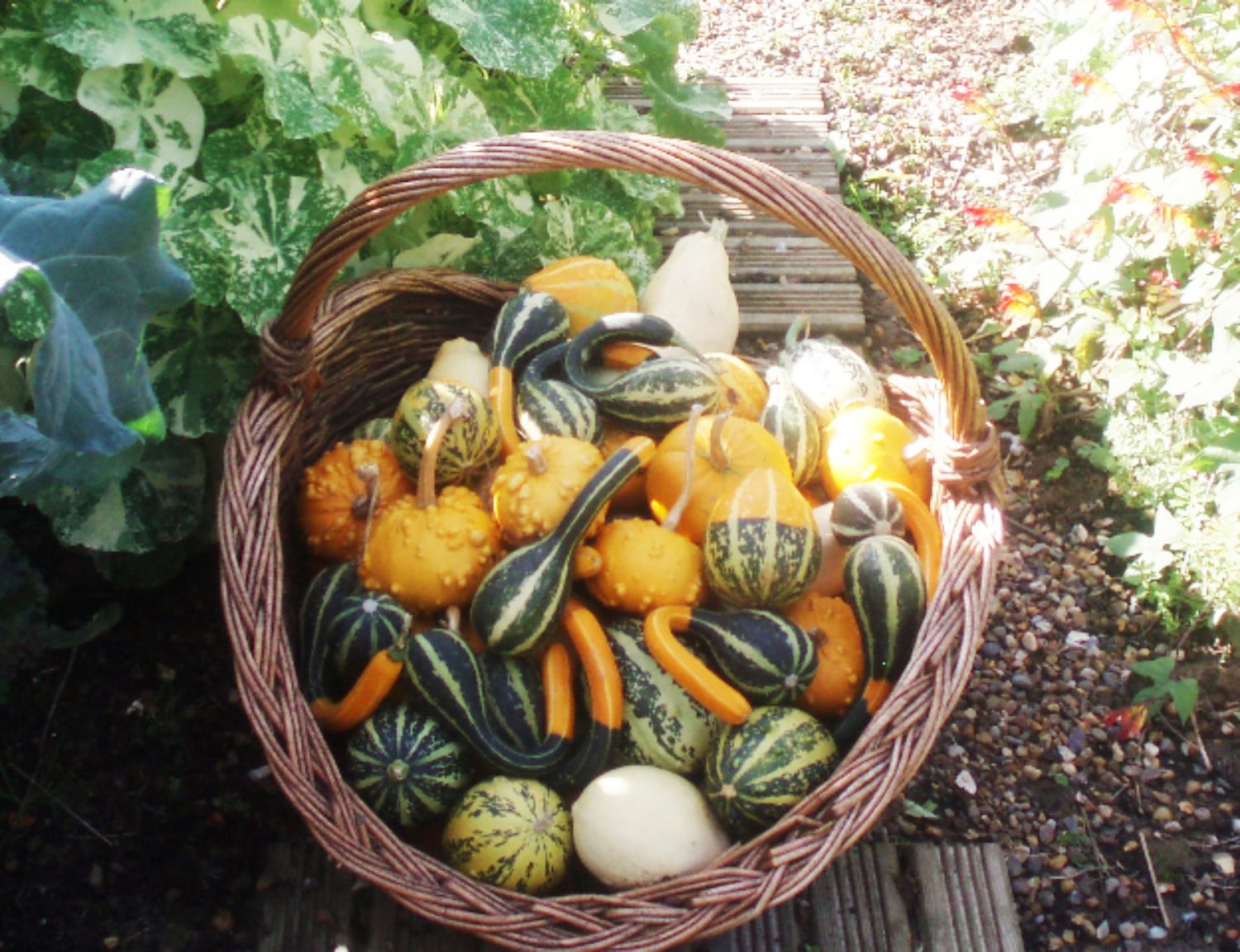