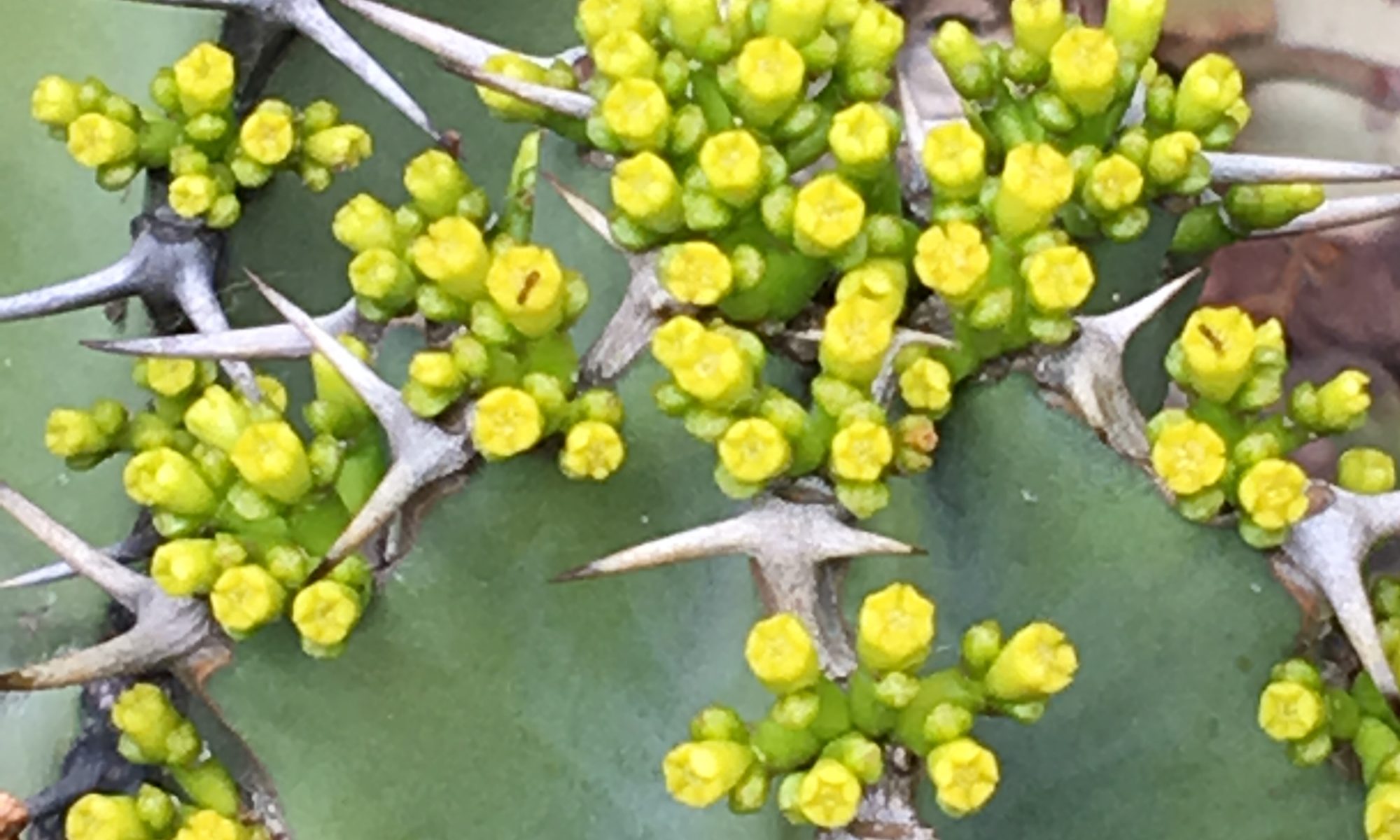 Sue Whigham makes a statement with unusual colours and shapes

its way. Actually, I think it is and so do the bumblebees. I saw a huge one collecting pollen from the flowers of that wonderful ground cover plant, Trachystemon orientalis (Abraham-Isaac-Jacob) just now. Things have been bursting into life despite torrential downpours. For example, treasures such as hellebores (and just who is snipping off their heads and discarding them?); primroses are in full swing and the cowslips are not far behind.

Some crocus are still going strong, despite taking a battering, and spring treats like pulmonaria and that gorgeous arum, Arum italicum subsp. italicum ‘Marmoratum’ with its long, marbled, heart-shaped leaves are showing themselves. There’s a patch of them in the front garden growing with a silver leaved cyclamen which to my certain knowledge has never flowered. The leaves are so gorgeous that it really doesn’t matter at all. And now the only problem is that as it has been so wet, the borders are still pretty weedy and the list of catch-up jobs is daunting.

There are so many thousands of unusual colours and shapes in nature that I thought the only thing to do is to put together a wish list of a few which are particularly gorgeous and special. I think for year round interest I would definitely put down the silver leaved Cyclamen hederifolium. They spread very nicely over the years and their wonderfully marked leaves are such a lovely contrast to spring flowerers.

Then, as spring progresses, one of the most lovely umbellifers appears if you are lucky: Smyrnium perfoliatum. This is a flower arranger’s absolute dream; a biennial, smyrnium tends to have a mind of its own and it either goes mad in its ideal spot – it prefers some shade and grows happily in the olive groves of Greece, although it is described as an unusual native plant in the UK.

I have seen it in the local woods and make an annual pilgrimage to specifically seek it out, but there’s been absolutely no sign of it in some years. And in a local garden where it is so happy, it has to be thinned out occasionally – well, a bit more than occasionally – however, not until the seed has been collected and redistributed as it prefers to be grown in situ.

The first year it is easy to miss the young plants, but once they get going, they give you a fabulous display with leaves shaped like ‘pointed shields’ up the stems, decreasing in size as they ascend. The plant reminds you of limey yellow euphorbias and has the airy habit of cow parsley.

Another wonderful plant for unusual shape and form would be the giant fennel, Ferula communis. These are related to the common culinary fennel but belong to a different genus. Ferula communis are in the carrot family but decidedly more spectacular. Their native habitat is in the Mediterranean region and interestingly in the shrublands of East Africa. From a huge clump of finely dissected foliage a 3m-high inflorescence unfurls, eventually producing wonderful yellow umbels. It is such a stunning plant and insect friendly too.

There’s a subspecies called ‘Glauca’ which gets to the same height, the difference being glaucous, bluey leaves. And Beth Chatto named the Tangier fennel, Ferula communis tingitana ‘Cedric Morris’ after her friend, Cedric Morris, the plantsman who originally collected the seed. This one is slightly shorter – but still comes in at 1½m – the difference being the shiny leaves and green umbels. They all flower in June but are exciting at all times of the year; in winter spectacular silhouettes tower over the borders.

If you could only grow one tree, Tilia henryana would surely be a candidate. I’ve probably written about this absolute favourite more than once. Henry’s Lime originates from China and was first discovered by the Irish plant hunter, Augustine Henry. However, it wasn’t introduced to the West until 1901 when Ernest Wilson brought it in. It deserves to be more widely planted and there are suppliers now who have them in stock, although it still seems to be a rare tree. It has huge, bristled ovate leaves which start the season tinged with red. By the autumn the ‘sea-green’ leaves start to turn golden yellow. Added to this, the creamy white flowers arrive late in the season providing an absolute feast for all manner of insects. Last year, I had some girls in for bed and breakfast over a really hot weekend. They decided to sunbathe near the tree and woke to a really loud humming and buzzing only to see that the flowers were absolutely smothered with insects having a high old time. Including a few hornets if truth be known, but they, along with all the others, were so busy feasting that we didn’t disturb them and they didn’t disturb us.

And of all the huge number of ilex, or hollies, that there are in the world with their myriad shapes, forms and habits, one of the most lovely and unusual is one which was discovered as a sport of I. ‘Golden King’ in the garden of Dargle Cottage, County Wicklow, home of Lord and Lady Goulding. From 12 cuttings taken in 1976 there were enough plants to start selling them by 1988. In Ireland this plant is often called Ilex x altaclerensis ‘Lady Valerie’ but in England it is more widely known as ‘Ripley Gold’. Do look out for it as it is so brilliant as a winter evergreen shrub. Its distinctively twisted leaves are glossy and have mottled splashes of a primrose yellow.

I love the way that the Irish Garden Plant Society described it: ‘the variable beauty of these is like a soft, sweet song to all who have an eye for leaf form and colour in the wintry landscape’.  And finally, Tibouchina urvilleana, the Glory Bush native to Brazil, a perennial on the tender side in this country, which is fabulous as long as you can give it over-winter protection. This winter has been so mild that it has survived an unheated greenhouse but in a ‘normal’ winter it would need some winter warmth.

It makes a great pot grown specimen unless you live somewhere like Penzance in Cornwall where it can grow to up to 10ft in a sheltered spot outdoors. I think it would be marvellous in a sheltered, sensory garden as everything about it is soft to the touch. The stems are red and hairy and the large leaves, too, are hairy and textured. Late in the summer, it produces satiny reddish purple flowers which look blue until you get closer to them. There’s a variegated form with leaves edged with pinky red which I think needs to go on the ‘must have one day’ list. 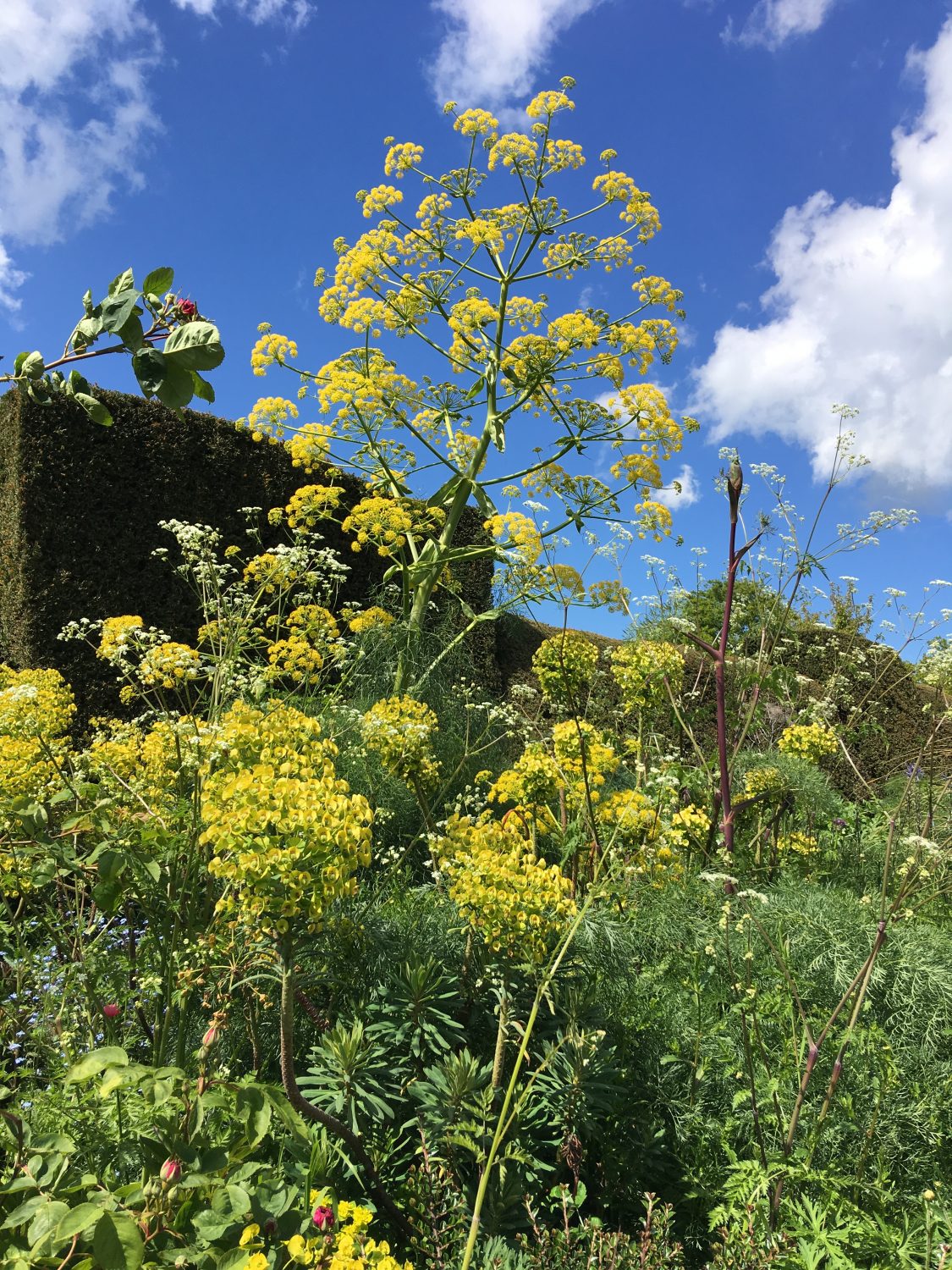 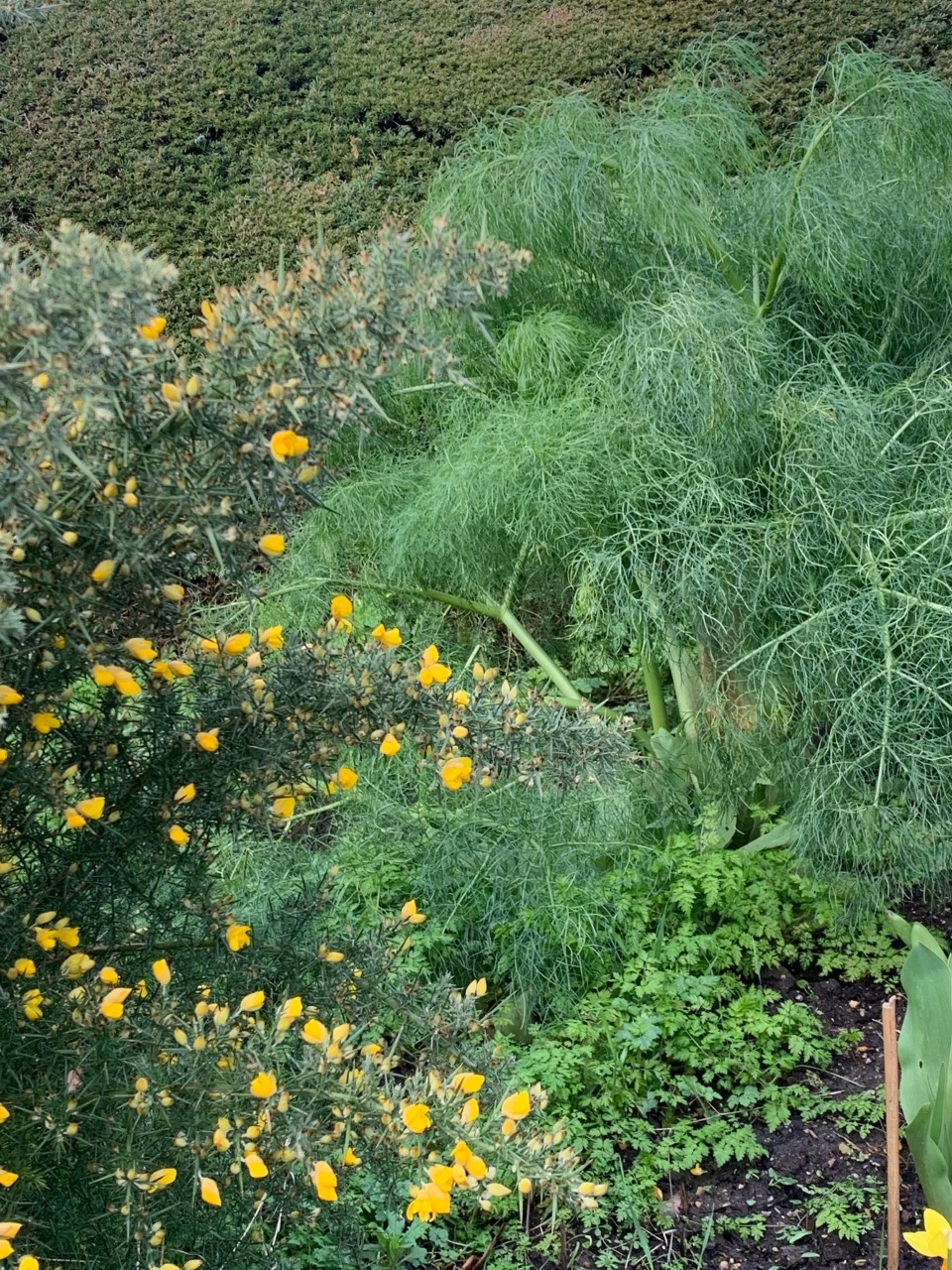 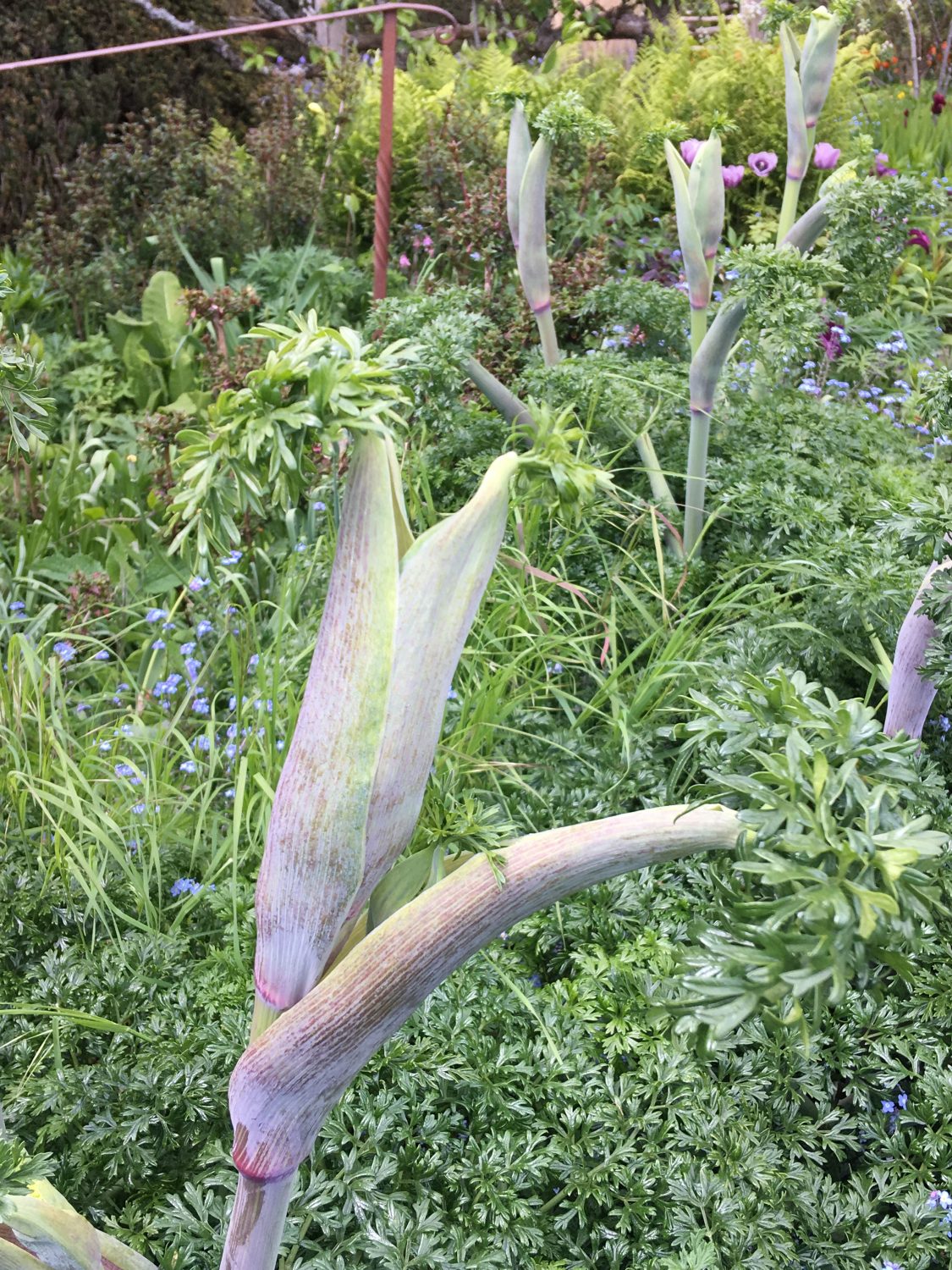 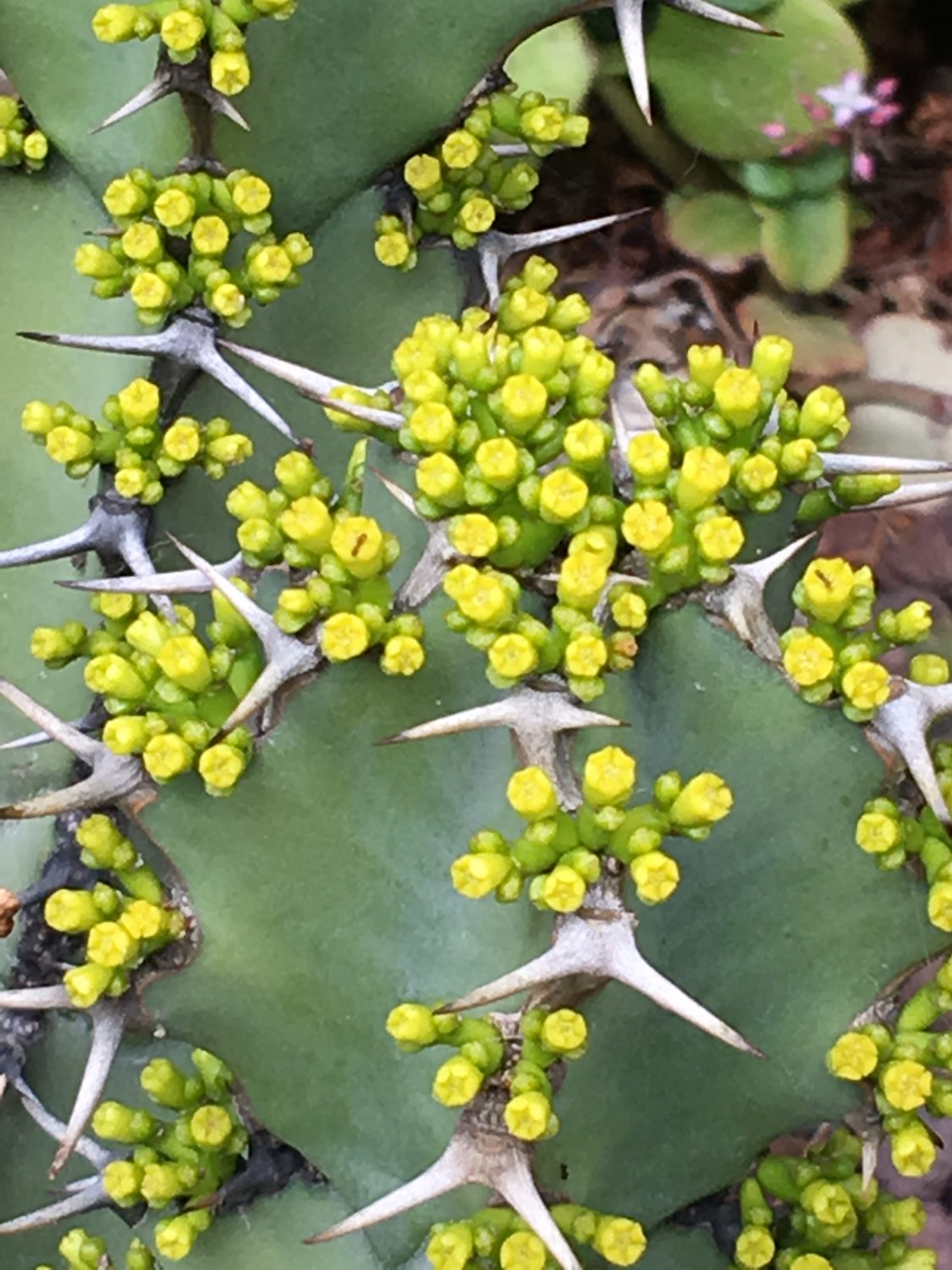 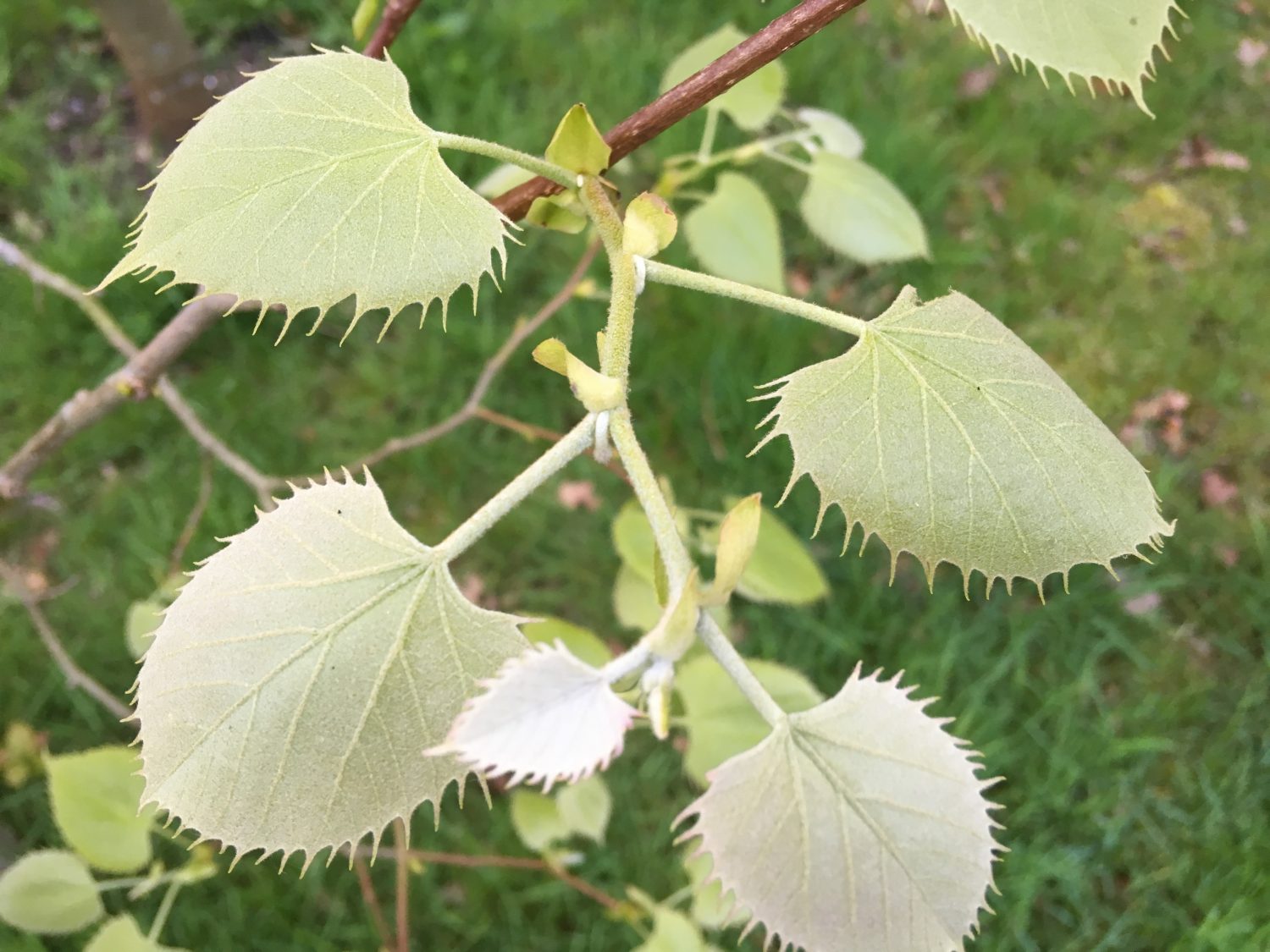