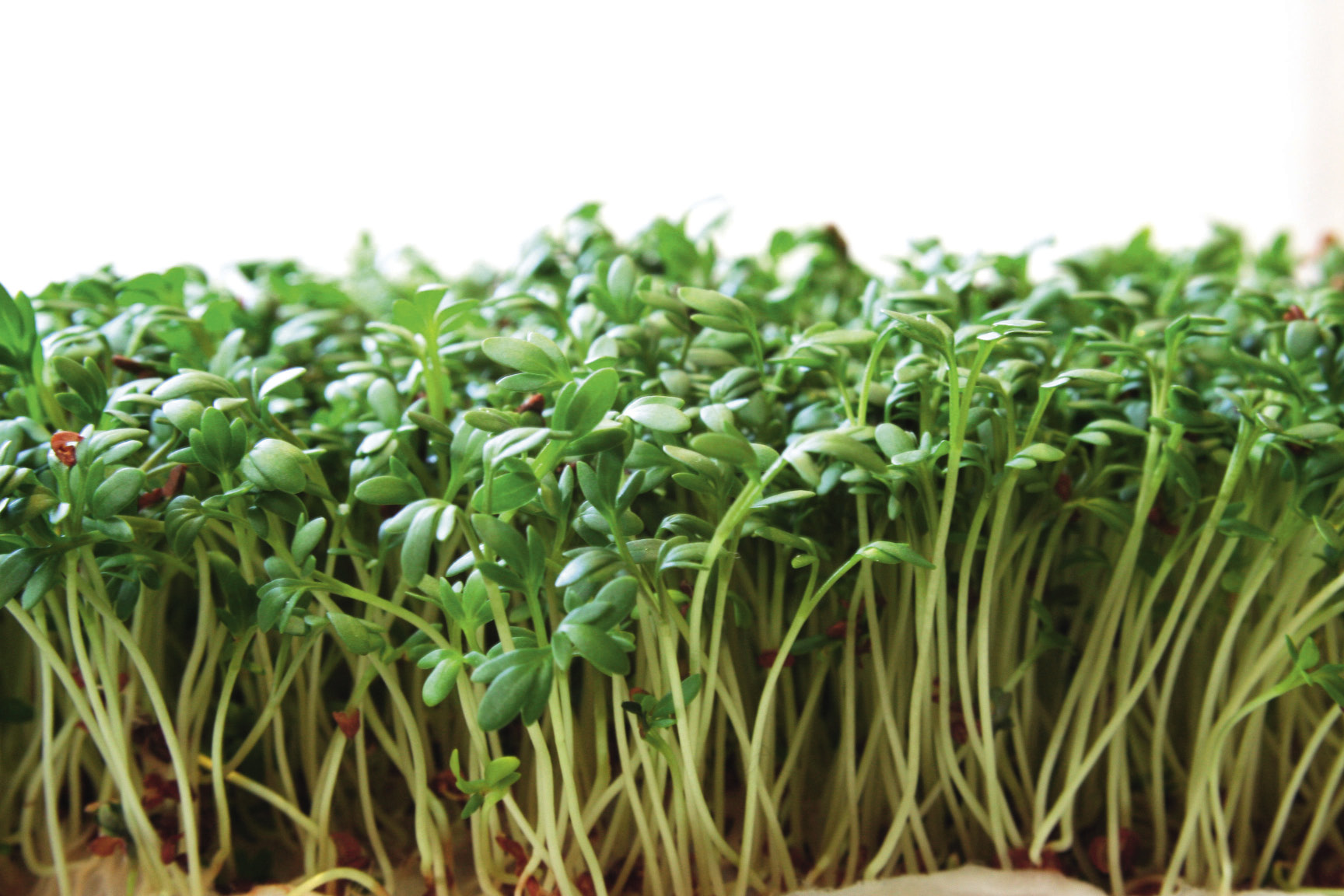 We couldn’t quite decide who was to get the sunflower seeds this morning. Us or the birds? The birds won but that was only because it was the Great Garden Birdwatch this weekend and sunflower seeds on the bird-table bring in the crowds. All was well until a huge wood pigeon appeared and everybody left. The reason for the hesitation in putting out the seeds is that I’ve been reading about microgreens this week and thought we’d try growing some ourselves. I know that sunflower shoots need to be harvested before they get their second set of leaves, unlike most microgreens, as they can taste bitter if they’re left to develop any further. But, as far as I can work out, they are the only microcrop that do this. I love the thought of nutty, crunchy sunflower shoots mixed with avocado in a salad.

Microgreens is the buzzword for leaves harvested small, in fact, very small – and all the rage in culinary circles. I turned Radio 4 on yesterday afternoon, and an ex-builder from Newcastle was being interviewed. He is now growing microgreens and has a waiting list of restaurants wanting to buy from him.

It seems to me that they are perfect for all of us to try, irrespective of what size garden we may have as they can be grown in sheds – as long as there is some light – glasshouses, porches, under cloches, on sunny windowsills and in any sort of container that you can lay your hands on right now. In the spring, grow them outdoors in pots or beds – weed-free preferably, otherwise you are going to be eating quite a mixed mouthful! A good source of trays, boxes and punnets might be your local greengrocer’s – just line the container with newspaper and fill with compost. It doesn’t need to be too deep. Use window boxes waiting to be filled later in the season with your annual bedding plants rather than leave them empty.

You can either use fresh compost or perhaps the contents of last year’s containers with a few added chicken pellets, for a shot of nitrogen which will get your microgreens growing and greening up in no time. Or, if you have a wormery, some compost from that mixed with whatever you have would do the trick. The other growing method is to use GrowFelt mats in your trays which are easily available from companies such as Marshalls.

The fun of growing microgreens is that you can harvest them within two or three weeks. They are not generally a cut-and-come-again crop as you’ll be cutting below the growth point of the plant although, having said that, peas will regrow if you cut just above a set of leaves. Sow thickly in your containers, avoiding the seeds encroaching on each other, and spread with enough compost to cover. Water in and cover with glass or a plastic bag until they germinate. Once they’re up, take the cover off and water lightly as they grow on.

Raid your store cupboard or last year’s seed packets to see what you have that might grow. Try dried pulses and seeds you’ve bought for cooking but which have got stuck in the back of the cupboard and try out seeds from your herb jars as long as they aren’t years out of date! Coriander grown as a microcrop tends to take its time to germinate but is worth the wait as the flavour is intense and perfect for a garnish. Herbs such as basil, dill and chervil are easy but it’s worth remembering to cut just what you need, as the plants will not keep for long once they have been harvested.

Grow beetroot, chard, orache, spinach – anything that you would usually like as a normal crop. Mix up the seeds in your container and you can then cut them together, combining flavours and leaves. Rocket leaves are deliciously tangy, as is mizuna. I love them both. There is a new rocket with distinctive red veined leaves called ‘Dragon’s Tongue’ on the market. It sounds very oriental but is a wild rocket bred in the UK.

Peas and beans are perfect and full of protein and shoot up remarkably quickly. Try different varieties like marrowfat peas and fava beans. These can be sourced from Hodmedod’s in Suffolk, who source their peas and beans from British farmers and have such a fantastic selection of wholesome, healthy foods for sale. Well worth looking up.

Scour the seed catalogues for interesting seeds to grow as a microcrop. I see that Chiltern Seeds sell two varieties of amaranth which, as they say, has never really caught on as a mainstream salad crop. It’s very much a West Indian favourite and great bunches of the leaves are usually for sale in Brixton Market in London. There is a variety called ‘Red Army’ which has a bright red leaf, jam packed full of protein and vitamins. And what about trying perilla?I always think that it is so pretty in a vegetable garden with its lovely crinkled limey green leaves, the scent of which is reminiscent of cinnamon. The red form, Shisho, is particularly nice. That’s the thing about microgreens. Their goodness seems to be concentrated into their young plants and it’s fun to try out different and unusual varieties for both their flavour and the look of them.