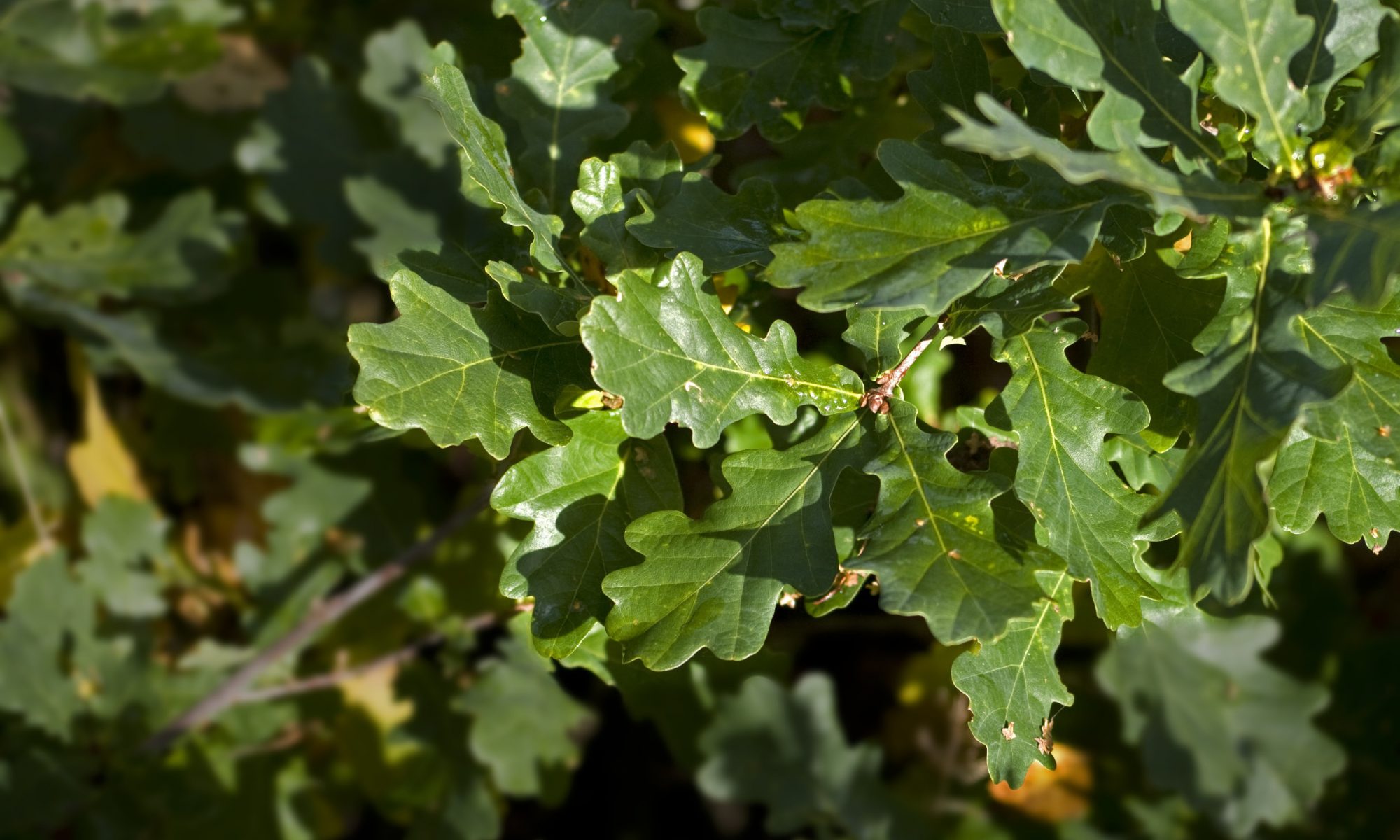 We’ve always had an affinity with trees and with none more so than the oak, and it is impossible to imagine our landscape without them.The oak has always been voted our favourite tree although a survey taken five years ago showed that only 67% of the nation could recognise one!

Oaks are supremely successful trees. They can reproduce in several different ways; they are pollinated by wind (they have male and female flowers on the same tree) and of course in a good year, the tree will produce hundreds and hundreds of acorns which then get transported by rodents to where they can germinate. Oak woods used to be valued for the amount of pigs that could be moved into them in autumn to feed on acorns and the right to graze livestock there was guarded and much fought over.

Like hornbeam and chestnut and ash, oaks can regenerate from damaged trunks or from stumps and were part of a huge coppicing industry up until the Second World War. Incredibly, they can live up to one thousand years but mature at seventy-five. In the main, our most ancient oaks have been pollarded at some time in their history as, of course, their root system continues to grow after they have been cut back.

Quercus robur, or the pedunculate oak, is so called because the acorns are carried on short stalks or peduncles. The distinctive leaf of our native oak has up to six lobes on each side. A natural habit of the tree is for branches to die back and drop off from time to time. Eventually the tree will lose some of its highest branches completely, a process which is known as ‘crown death’. But this decay is grist to the mill to insects, birds and all manner of wildlife. Over two hundred and fifty insect species alone have been found to use the oak tree as a host. They also play host to woodpeckers, nuthatches and tree creepers amongst others and the decaying matter under a single tree provides rich soil for plants such as bluebells.

My tattered old copy of the Hilliers Manual of Trees and Shrubs describes the hornbeam as a ‘picturesque’ tree and indeed it is. Hornbeams are found in oak woodland and are happiest in shady ground afforded by surrounding trees. They can make a very large tree – up to 30 metres – and have been known to live for about three hundred years. Sometimes confused with beech at a quick glance, hornbeam’s pale grey bark has vertical markings and ridges and a twisting habit which develops with age, whilst beech trees have much smoother and even trunks. And the leaves are smaller than those of a beech, although similarly oval and with pointed tips, but the deeply furrowed veins on the hornbeam’s leaves are very distinctive. They have the added bonus of hanging on, especially on the lower branches, during the winter. The tree’s autumn colour is brilliant as the leaves turn a lovely buttery yellow. The RHS list hornbeam in their top ten of trees with exceptional autumn colour.

Hornbeams are monecious. They have male and female catkins on the same tree. Pollination is by wind and the female catkins develop into hop-like green winged fruits. These are known as samaras. They are also prolific self-seeders which is a treat as it doesn’t take long for the seedlings to reach a decent height. They can then be transplanted into their own space.

As the tree responds well to being coppiced and grows back readily from being cut down to stump level it, like the oak, is one of the native trees grown and coppiced for a variety of uses, and of course the twigs are great for pea supports. Now is the time to get collecting those.

This has now become quite a rarity in the Weald but it can still be found in pockets of ancient woodland thriving on heavy clay. And I was glad to hear today that Rolvenden had planted some young trees in the village to celebrate the Millennium.

The tree is often confused with maple as its leaves are not dissimilar and turn a rich red in the autumn like those of a maple. In fact the lobed leaves are not like those of any other sorbus. Pretty clusters of white flowers appear in late May and the fruit in the form of pale brown berries mature in September and provide a valuable food source for birds.

The bark is distinctive and is patterned with what look like cracked squarish plates, and the other clue to the Wild Service is the little round leaf buds that appear on very short leaf stalks. They look like little green peas.

The tree was also known as the Chequer Tree as its fruits were sold in markets as ‘chequers’. They are said to taste like dates and were given to children as treats and were used to flavour whisky and liqueurs.

Handsome, deciduous and recognisable in winter by its jet black buds, the ash is a pretty common tree in our area which comes into leaf later than most other trees and often is the first to lose them in the first frosts. The flowers appear before the leaves and the purple female flowers are wind pollinated. They are curious in that they have no petal, plus the tree can have male and female flowers on the same tree but some years a tree can produce just male flowers and then in another year, all female flowers! The seeds of the ash are known as keys or ‘helicopter seeds’ which enables them to land just about anywhere and to appear in the strangest of places. What an enterprising tree.

Ash makes great firewood as it burns well in the green. Its wood is hardwearing but not as long lasting as that of oak but it makes up for that with its pale elegance and attractive grain when made into furniture and flooring.

As the ash’s canopy is light and open, the tree is often accompanied by an understorey of hazel and a rich ground cover including ransoms and dog’s mercury. The bark is host to lichens, snails and moths as well as stag horn beetles.

Due to the very real threat of ash dieback – caused by a fungus now known unpronounceably as Hymenoscyphus pseudoalbidus – ash trees cannot be sold or imported. However, to encourage new trees domestically, the seeds will germinate right away if they are collected and planted whilst they are fresh and green. If they are left to go brown, they will germinate but only after a couple of seasons have passed. 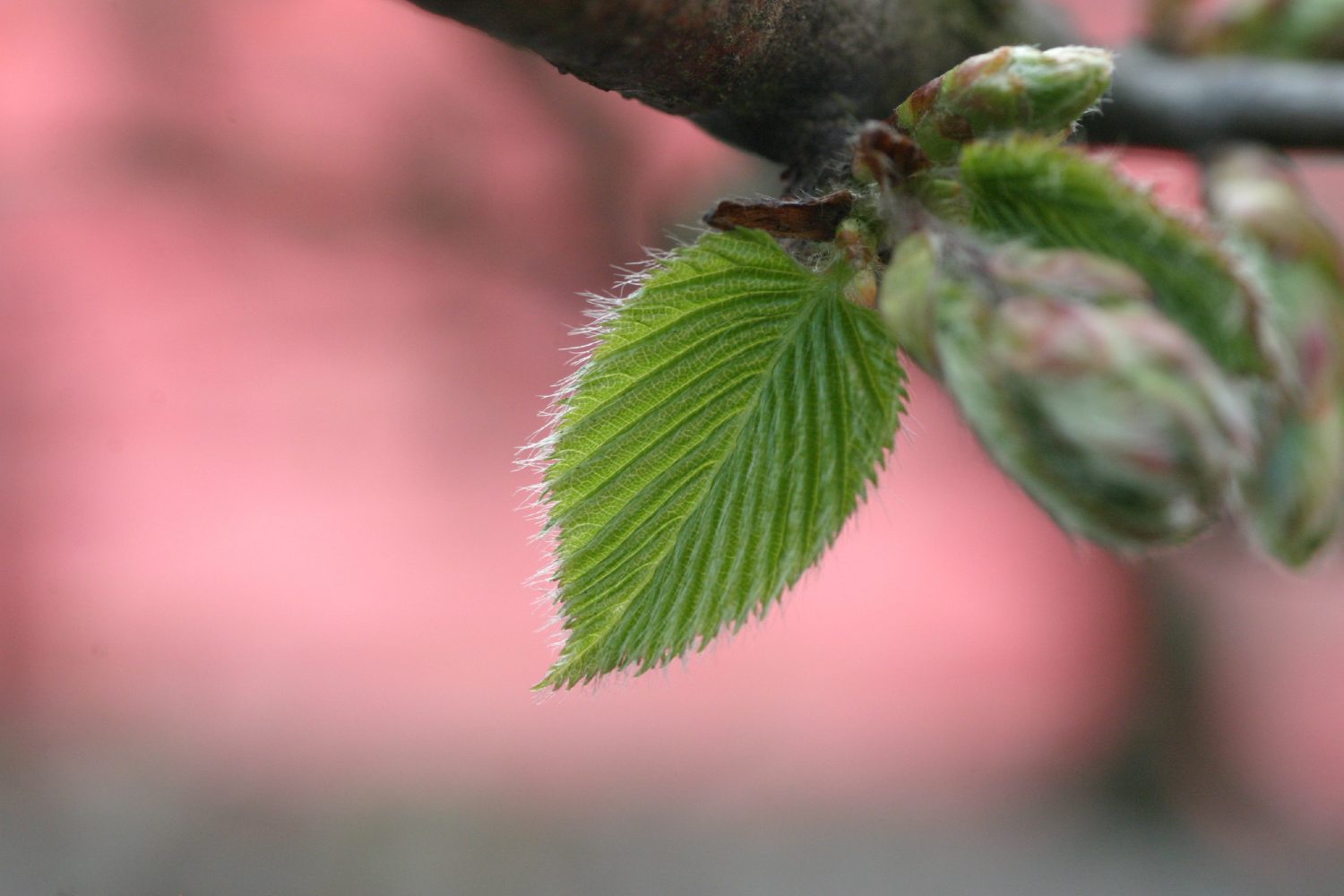 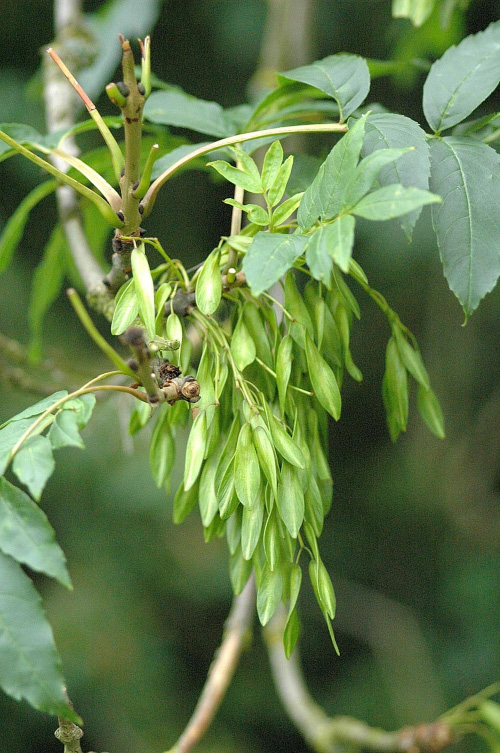