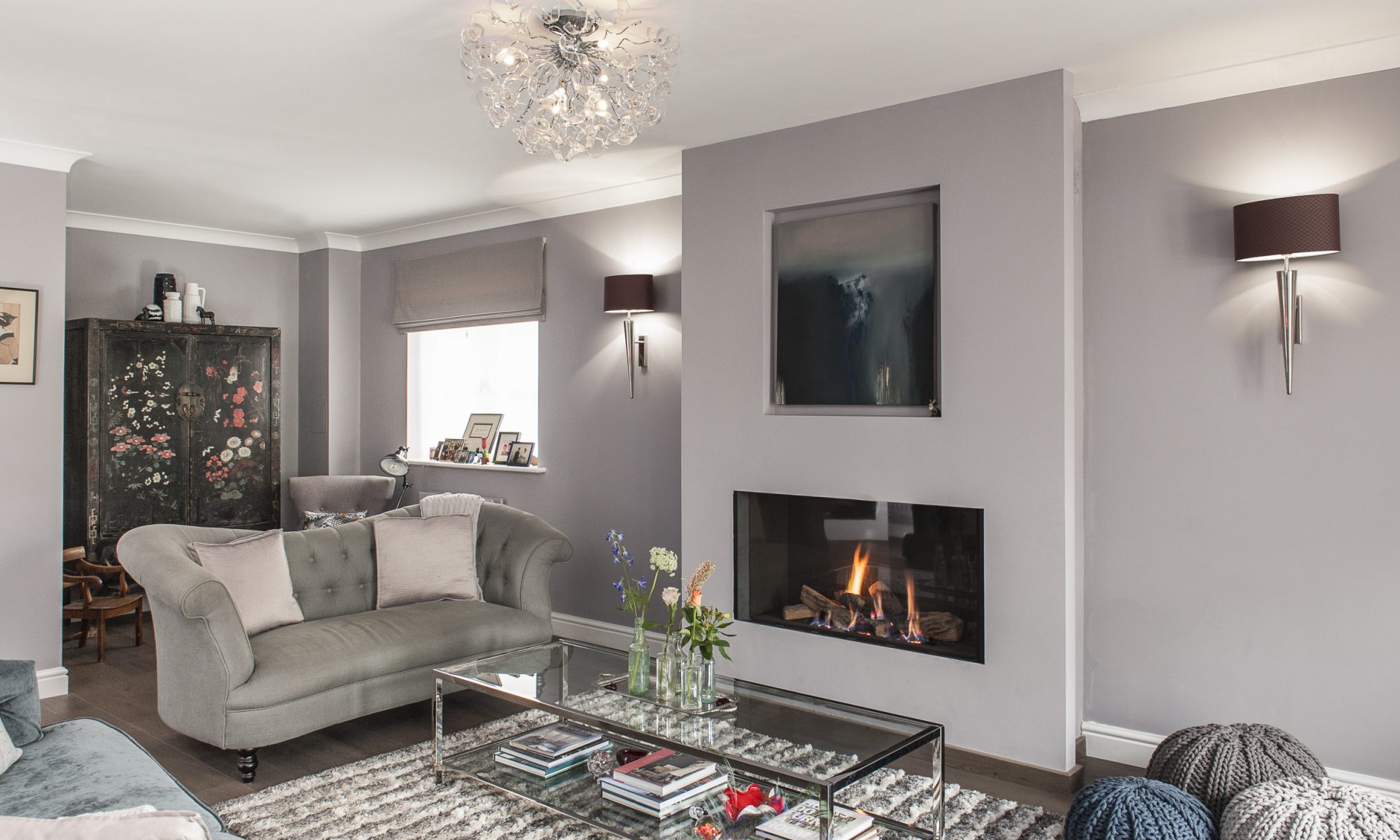 Phoebe Oldrey and her husband Miles knew that they wanted to move out of London, but were adamant that, unlike many Londoners, they didn’t want to ‘escape to the country’. They wanted to live in a nice rural town, somewhere safe, with more growing space for their two young boys. They’d started looking around St Albans, but happened to come down for a short break in Pembury one weekend. “By the time we hit the Pantiles we’d decided that Tunbridge Wells was the place to be,” says Phoebe. “We had our house on the market by the following Monday.”

With the London house sold, the challenge was to find the right property in the area. “Space is at such a premium in a city, and it’s amazing how much more of it there is when you move out, Phoebe remembers, “We bought with our London eyes.” This house was a new build – it had been built two years previously and painted throughout in the developers’ favourite, Magnolia.

The original owners had added on the large conservatory at the back. It was smart and neat and the couple didn’t need to do any structural work at all, in fact, the only major change has been to replace the fireplace in the main living room and remove a fitted wardrobe in one of the bedrooms. “We could see the possibilities of what it could become,” says Phoebe.

Once the family moved in, the difference in scale between their London house and this one became glaringly apparent. “We moved in with three lorries – a houseful from our last place, but it just disappeared here – and our London furniture huddled in the rooms.” With some smart thinking and a lot of hard work, a remarkable transformation has taken place in this ordinary, but spacious property. It’s all been achieved with paint, furnishings and the ingenious eye of an inspirational interior designer, namely Phoebe herself, who runs Smartstyle Interiors.

So, is there a difference between here and London? “In London it’s micro design. It’s all about the cupboards and the storage, as space is tight there. But here, that’s not an issue,” Phoebe replies. “Transferring the business was hard at first, but you just have to up your game. Luckily I learned by my mistakes on someone else’s watch.” Phoebe worked for a few prestigious interior designers before setting up on her own – at the high end of the market, where people think nothing of spending £25,000 per room.

“That’s where you can play and create some amazing things.” She worked for Mark Humphrey, one of House & Garden’s top 100 designers, and then for Sue Symons, who became an important mentor. “I learned more in three months working there than during several terms at college,” she says. “Most of the project is about delivery, not just the ‘on paper’ part.”

Phoebe originally trained as an actor, but found the lifestyle too unstable and precarious so turned her attention to interiors. “I like the process of working on a project,” she says. “Miles bought me a Terence Conran book, which I read from cover to cover and then applied to college.” She graduated from KLC school of design in 2002. The acting skills haven’t gone to waste, though; presenting and selling ideas is an important part of the process.

“It’s not about forcing people a particular way,” Phoebe says. “I bring my style, but there are lots that I like; the principles lend themselves to all styles, as you’re working with the space and the client’s lifestyle. There is a ‘Phoebe’ approach but in the end they’ll be living with the results.” She tries to be realistic about clients’ tastes and preferences. “People can be sentimental about furniture, so I suggest that perhaps a loved piece can be renovated or recovered. I’m always open to suggestions too. That way everyone is satisfied with the results.”

It’s this kind of flexible approach that allows real rooms to be created, rather than something you’d find in a hotel or on an advertisement.
Looking around, I’m intrigued by the colour on the walls in the hall and the main living room – it’s the most perfect shade of grey and sets off all the furnishings and other finishes in the rooms. It appears to be the same colour throughout, except that it’s not.

“The light changes in each room, depending on where it is in the house,” says Phoebe. “North facing is a very different light to south. The colour on the walls is ‘Welcome’ from the Little Green Paint Co – you can buy different shades in the same colour: Welcome in dark, deep or just plain Welcome.” Suiting the shade of paint to the natural light coming into the house is an idea that makes a lot of sense.

As we wander around Phoebe’s house, she talks through the process. “There is usually a starting point. It can be a painting, like in my sitting room,” she says, indicating a striking piece by Emma Green above the fireplace. The painting echoes around the rest of the room, in the colours, textures and tones that Phoebe’s used – even the fireplace’s dimensions were designed around it.

Looking about, I get another lesson in design – there’s balance between the furnishings and finishes. Harmonies and contrasts are subtly at play. There’s symmetry around the fireplace and behind the velvet sofa, but also a clever juxtaposition of textures and patterns. The tactile rug and wonderful ‘sea urchin’ floor cushions contrast with a glass coffee table and the smooth grey walls set off the curtains (in a design by John Paul Gaultier) perfectly. I think it all looks great, but Phoebe insists there’s something missing. “I need something about the size of a bear to go in that corner,” she jokes, pointing to a space.

Lighting is very important too – and some of the lamps in Phoebe’s house have a sculptural quality of their own. The huge lampshades in the hall by Lorna Syson were commissioned by Phoebe to suit the space “I knew one had to be bigger than the other,” she says. They make a bold and playful statement – as you walk near them, you catch a glimpse of some painted Blue Tits perching on the inside of the shades (these echo some blue tit decorations that Phoebe has hung on the wall lights in the kitchen). The giant light on the landing is from Ikea and casts the shadows of a hundred spiders on the walls and stairs – an artwork itself. “It was a good price,” she says cheerfully, “but like everything from Ikea took hours and hours to put together.”

Phoebe pulls off a neat trick in mixing some very exclusive and eclectic pieces with bargains picked up from lots of sources – from the high street at places like HomeSense, online at Made.com and also her eagle-eyed eBay finds. “I grew up in a little cottage in the country,” she says. “My mother was an antiques dealer, so I’ve been around furniture and furnishings all my life.” She points to some antique maquettes – models of furniture made by the original designers – on the landing windowsill that her mother used to bring back for her from sales.

“So my style is very mixed. I like antiques, but also classic contemporary, and mid-century modern.” She points out some retro white ceramic vases from Germany, sourced by Hannah from Love Inc. “I love coloured glass too, and when we were living in East Finchley there were some really good charity shops where I found lots of it,” she says wistfully.

The stairs and landing are unusually generous in proportion for a modern house and the spacious landing is home to a William Morris bench and some Japanese Tansu pieces. Phoebe is half American and there’s a big oriental influence in California and lots of oriental antiques. She inherited most of the oriental furniture, together with two Tansu pieces that were shipped over from San Francisco. Luckily Tansu were designed as portable storage units and were meant to be moved around.

The master bedroom has a suitably calm and restful feel to it. The beautiful curtains in fabric designed by Lewes-based artist Jessica Zoob for Romo, were the starting point for the whole room. Phoebe got the chairs from Free-cycle and had them re-upholstered. There’s an atmospheric wall sculpture above the bed by “Anya Beaumont, a sculptor who was in my NCT group,” she says. And the quilt, which harmonises perfectly with the curtains was from her mother’s bed. “The stories of our lives are reflected in the things we own and the way we display them,” says Phoebe, and to illustrate, she shows me a lovely silver bowl that her grandfather gave to her grandmother engraved with the motto “It takes courage to have a good marriage.” Perhaps we should all keep such a bowl at our bedside.

As we look around the other bedrooms, I’m heartened by the evidence of normal life in one of the children’s rooms. Phoebe is keen to stress that the boys should be allowed to be boys and that their bedrooms shouldn’t be turned into designer spaces. The guest room is very smart, but Phoebe is keen to show me that most things have been bought off the shelf – the tiles in the bathroom are from Topps Tiles, the wallpaper is ‘Hawthorn’ by Laura Ashley and the cute sofa from Made.com. At the end of the bed, under another of those stunning, but hard to assemble Ikea lights, is an exquisite painted leather chest that belonged to her grandmother – and it all blends together effortlessly.

Phoebe outlines the whole process of interior design and decoration neatly: “Allow a 25% contingency for unexpected things to happen – you just never know during a project. The rooms always look worse before they look better; the client is always excited at the end of the first day, and then after 2 weeks of a 6 to 8 week project, reality sets in. Lots of invisible things are happening – and then in week 4 everyone loses faith. Then it all comes together in the end.” Throw in the odd near disaster and there’s the format of not just a well-known house building show, but a recipe for life – and a successful career in interior design. 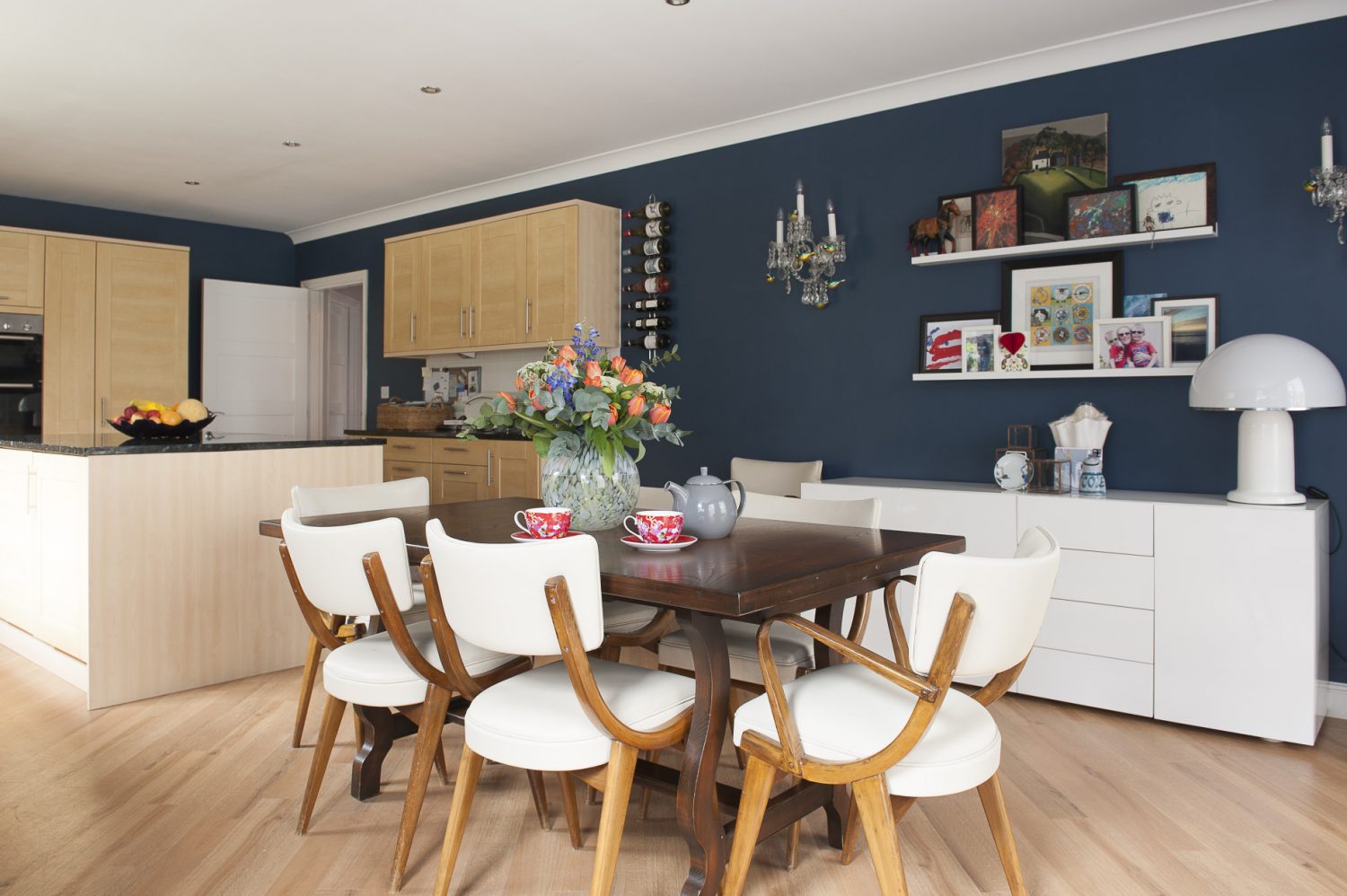 Throughout the house, Phoebe has cleverly mixed some very exclusive and eclectic pieces with bargains picked up from lots of sources – from the high street at places like HomeSense, online at Made.com and also her eagle-eyed eBay finds 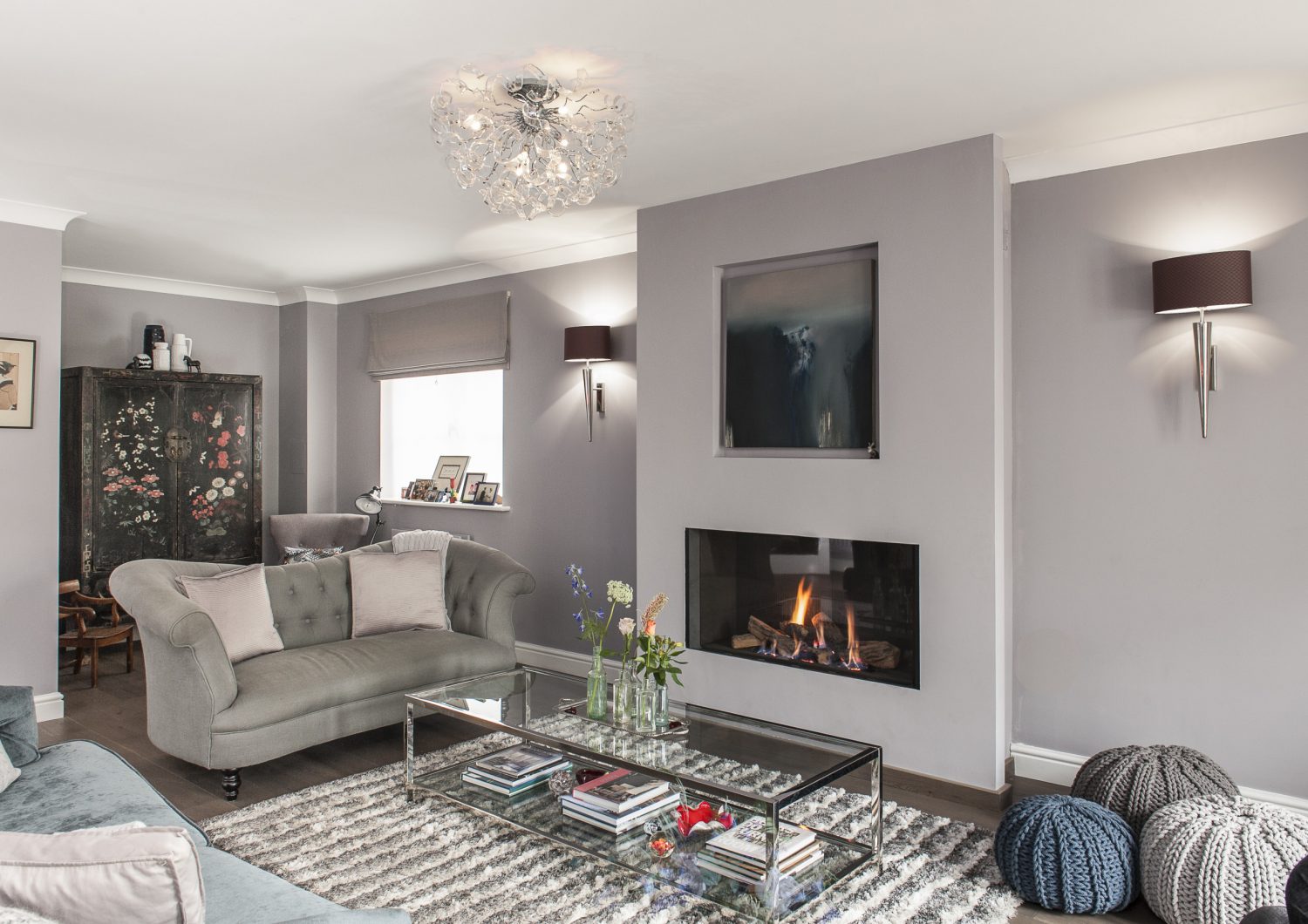 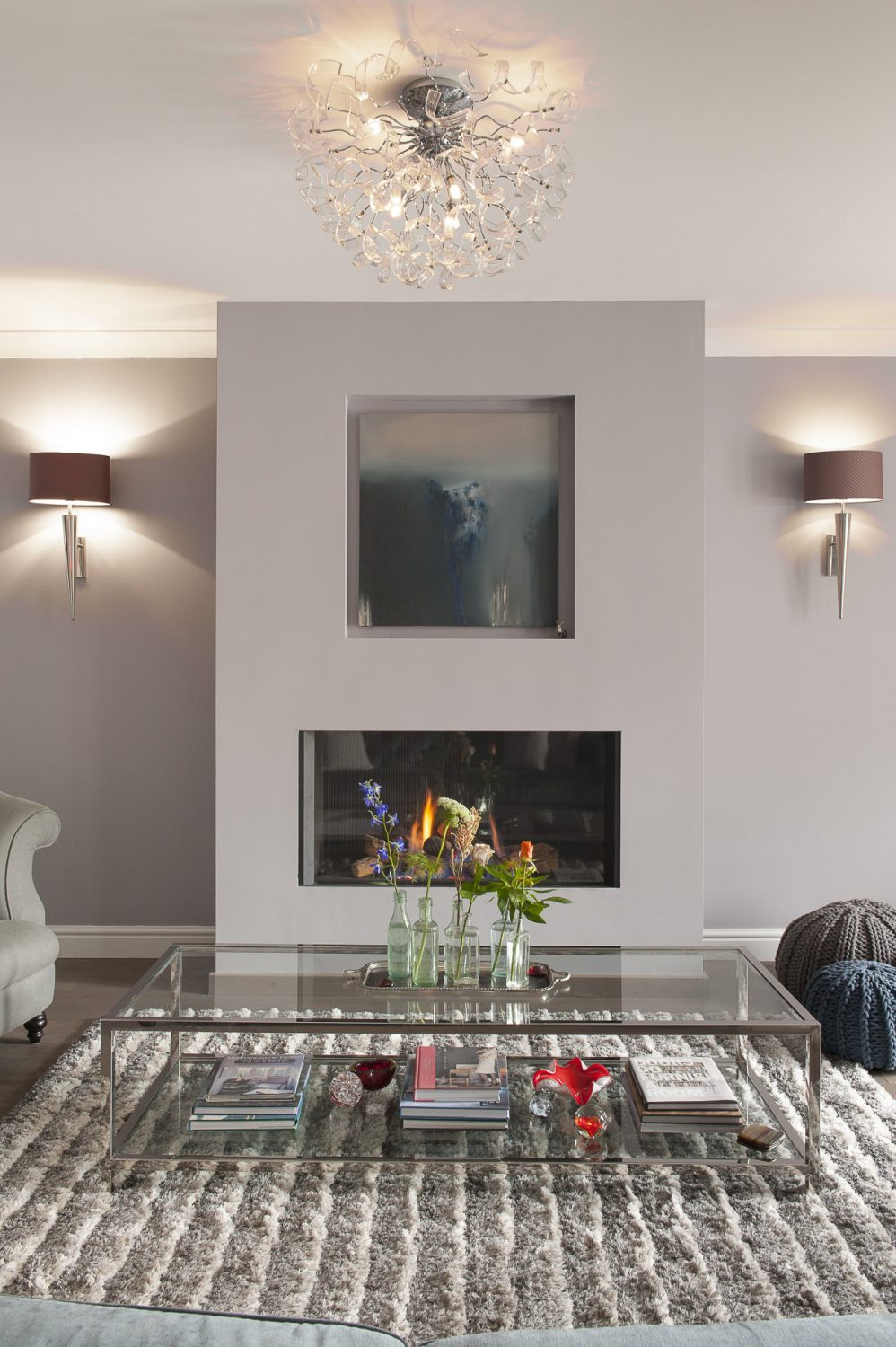 “There is usually a starting point. It can be a painting, like in my sitting room,” she says, indicating a striking piece by Emma Green above the fireplace 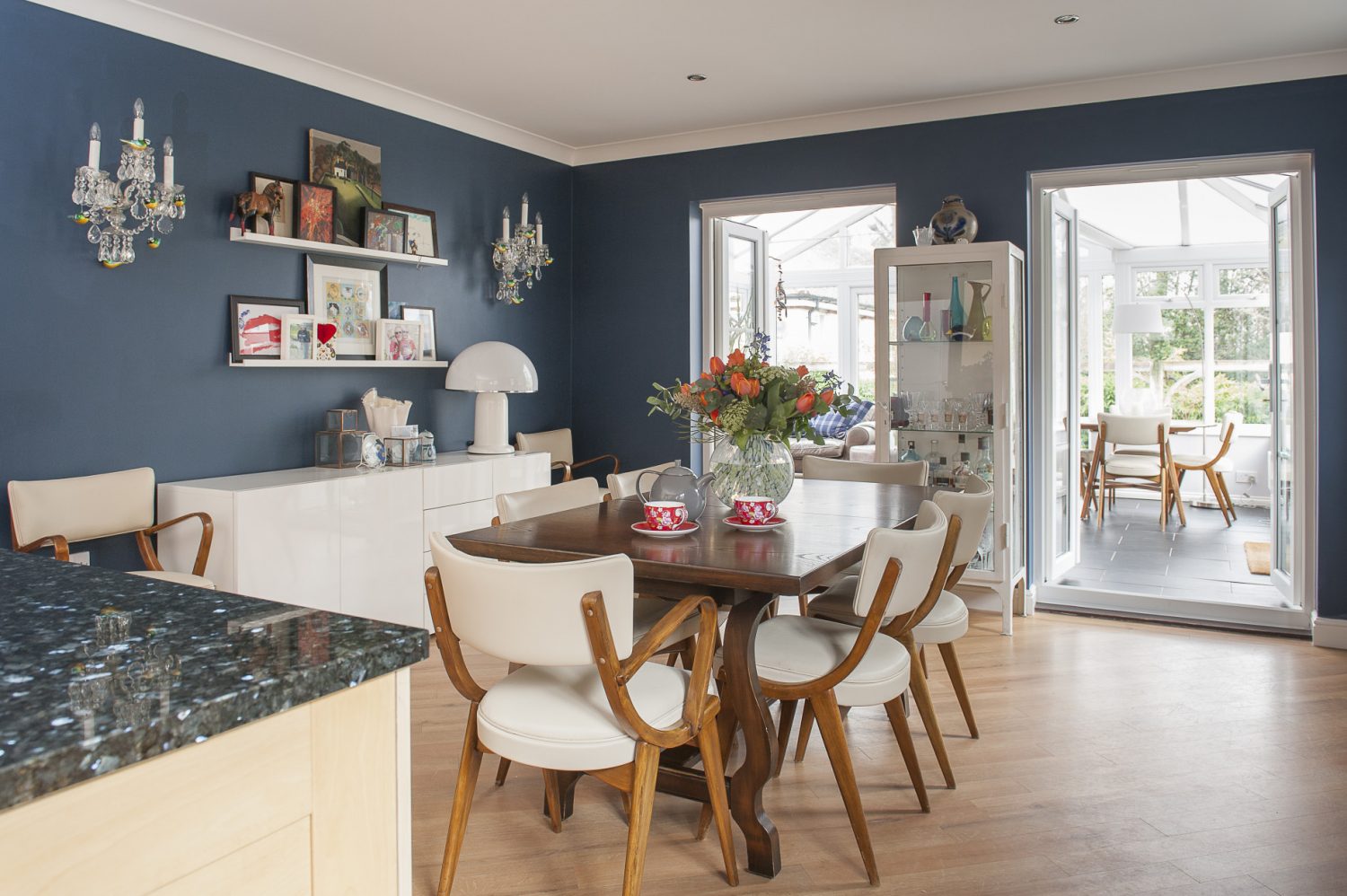 The open plan kitchen and dining room is painted a rich, deep blue 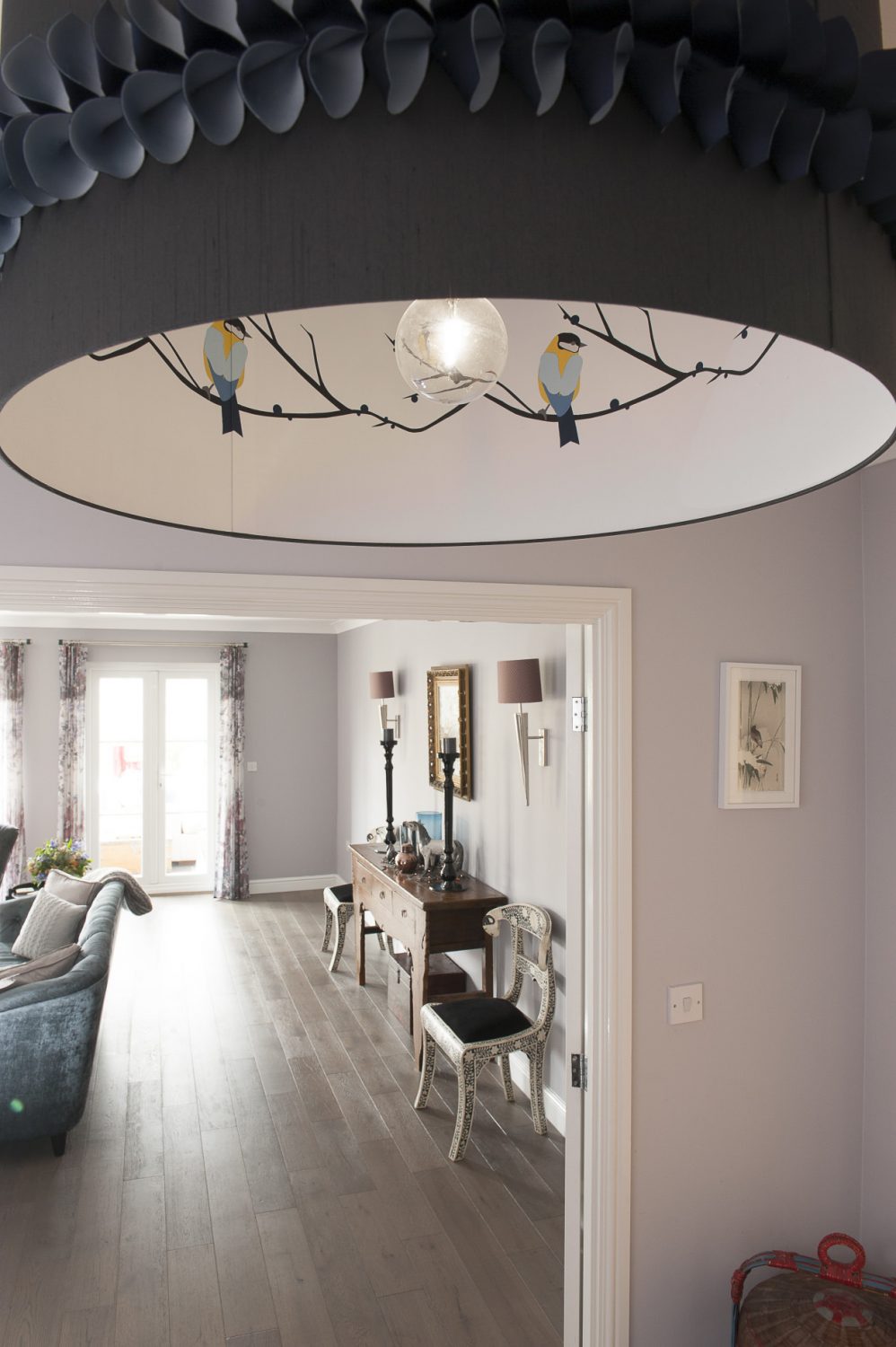 Phoebe commissioned Lorna Syson to create the huge lampshades in the hall. They make a bold and playful statement – as you walk near them, you catch a glimpse of some painted blue tits perching on the inside of the shades 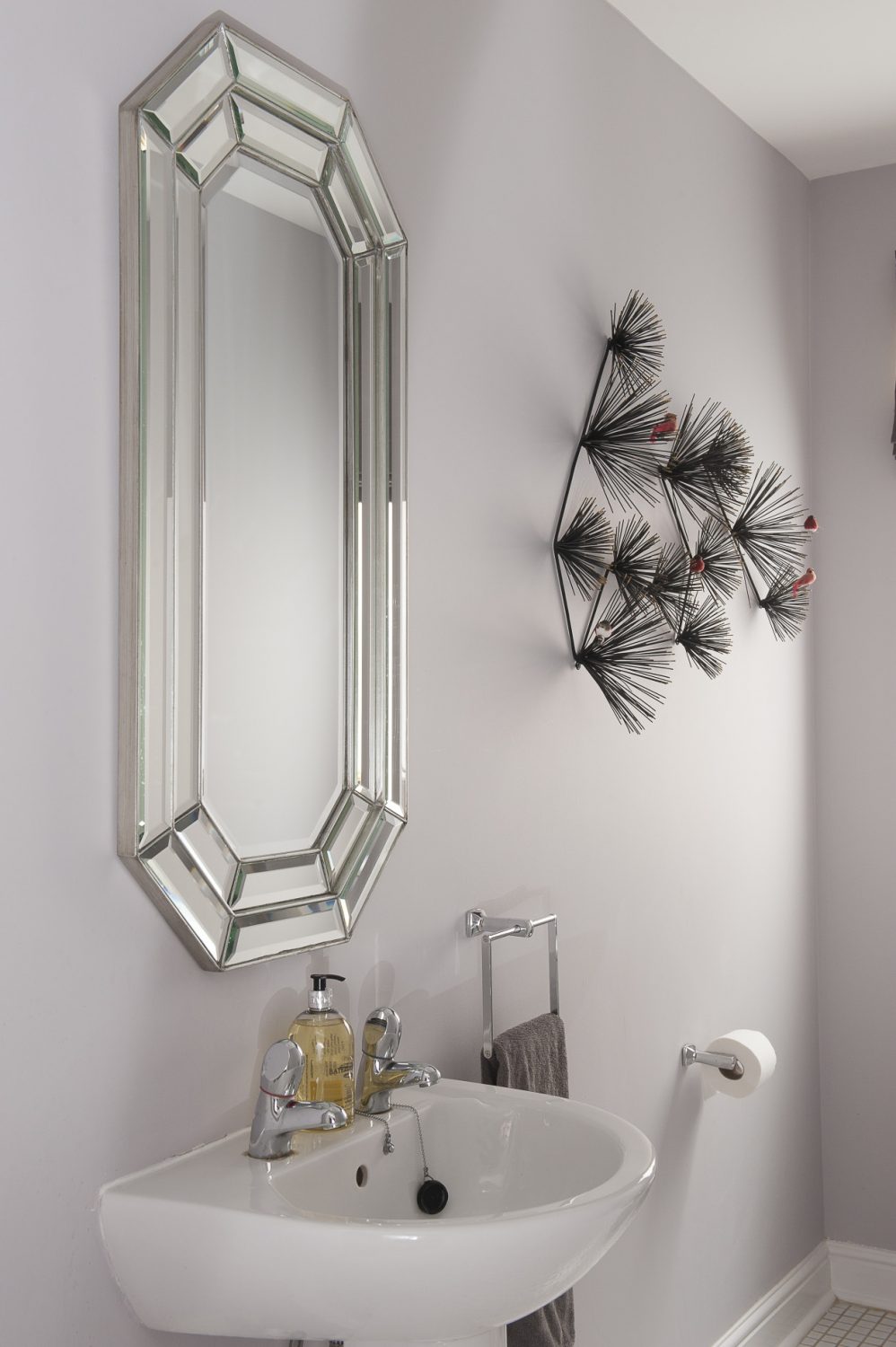 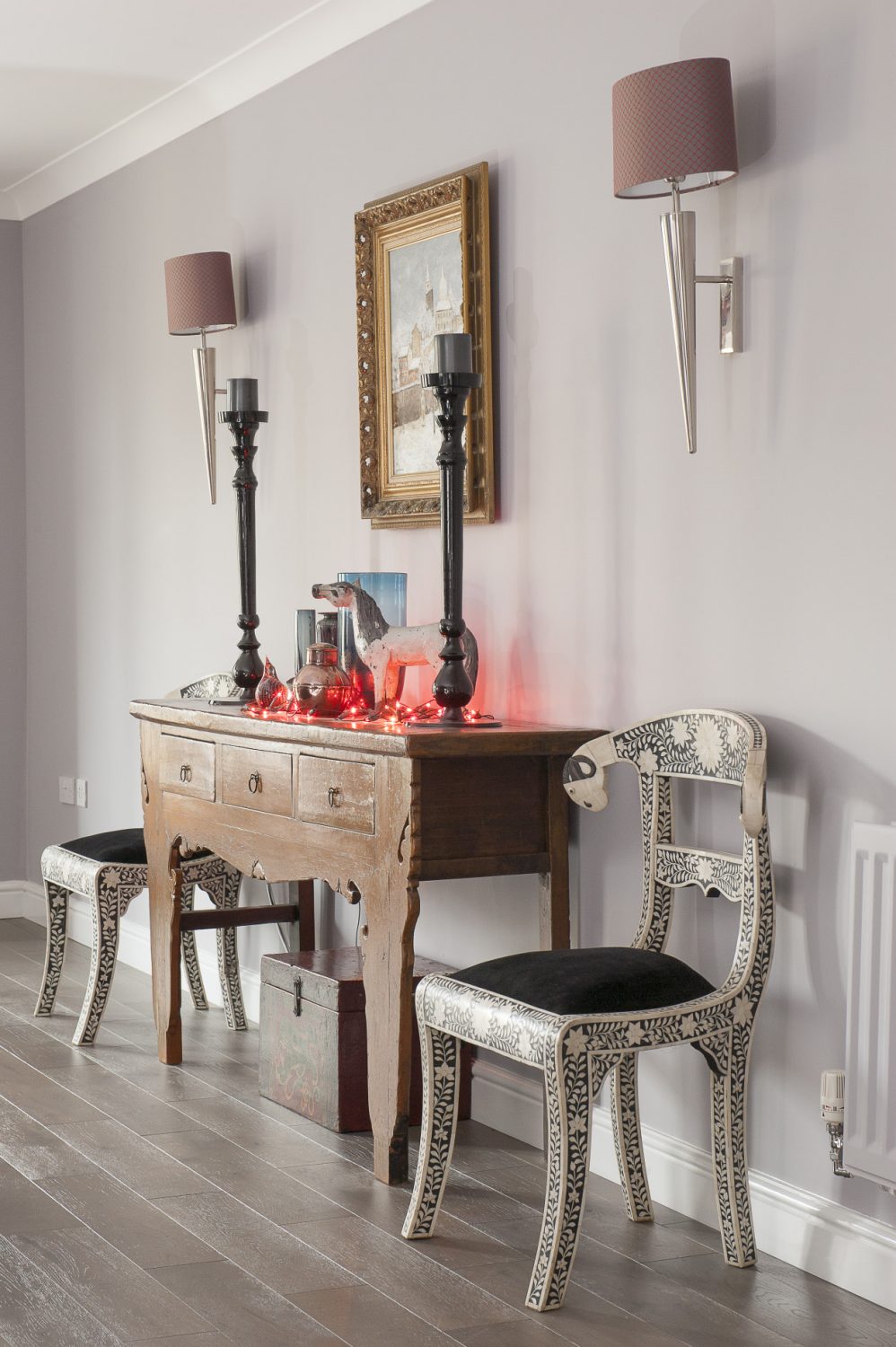 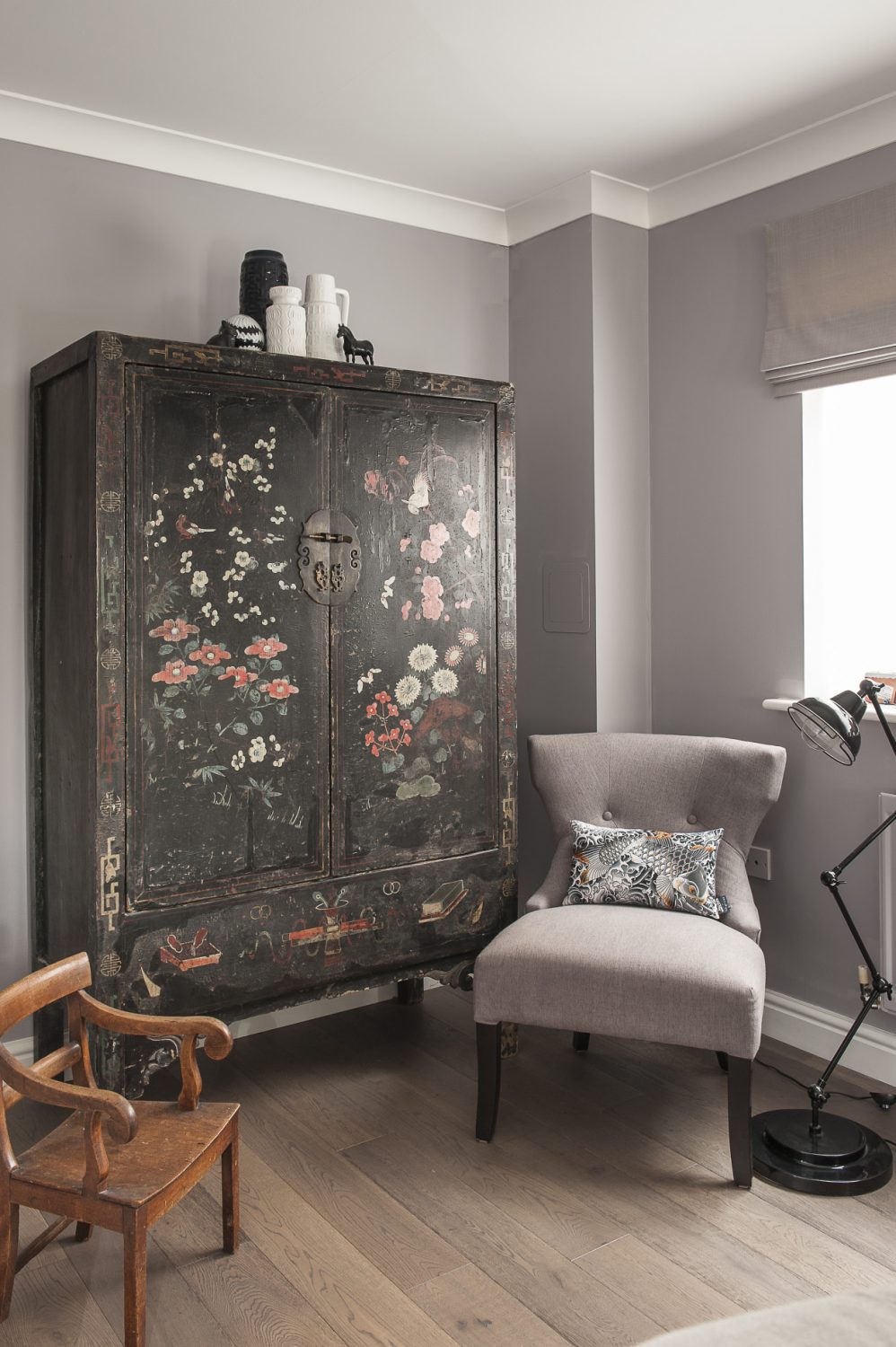 Phoebe has created a clever juxtaposition of textures, designs and patterns from inlaid chairs and an oriental cupboard to a sequinned Jean Paul Gaultier cushion 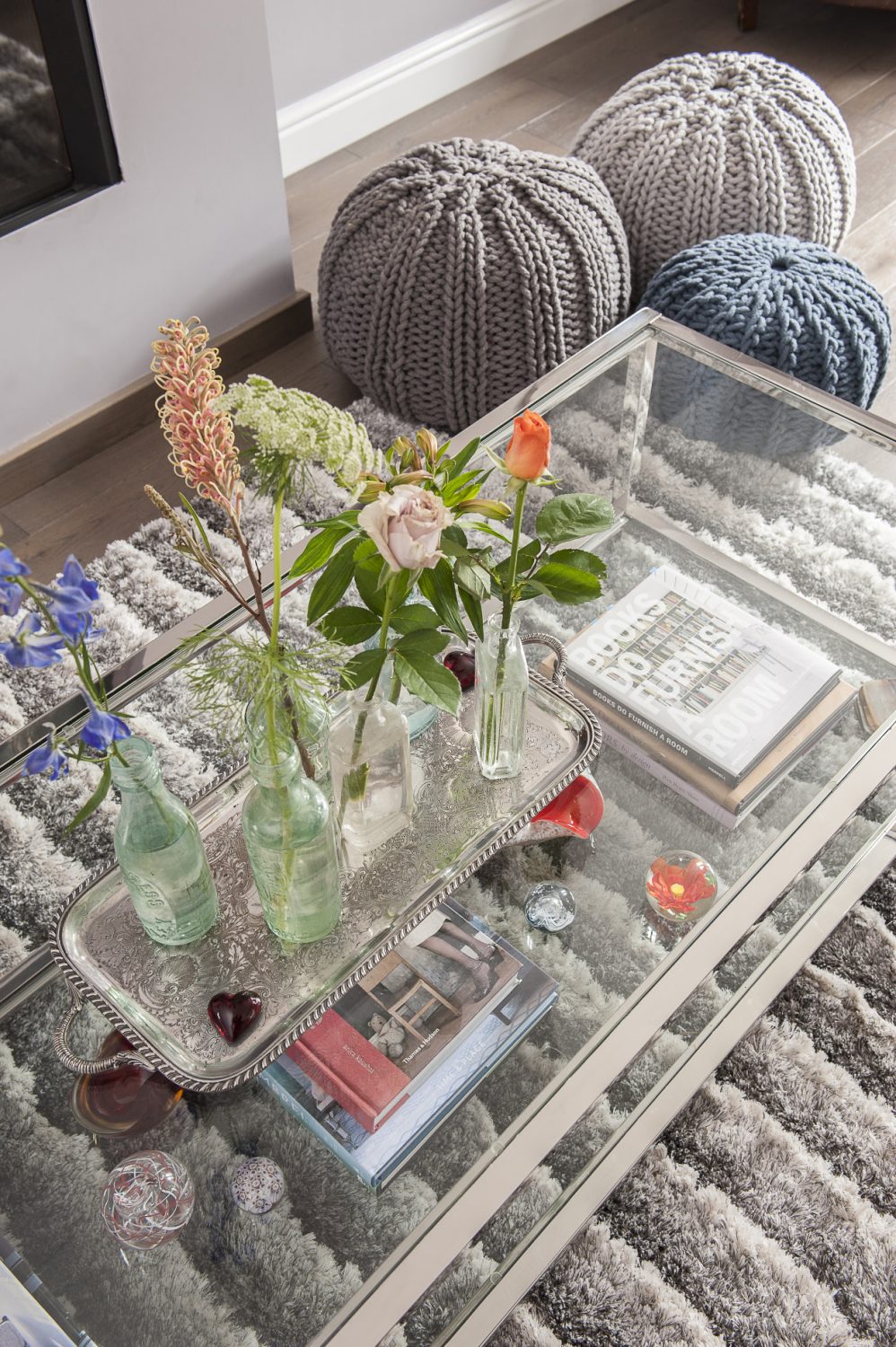 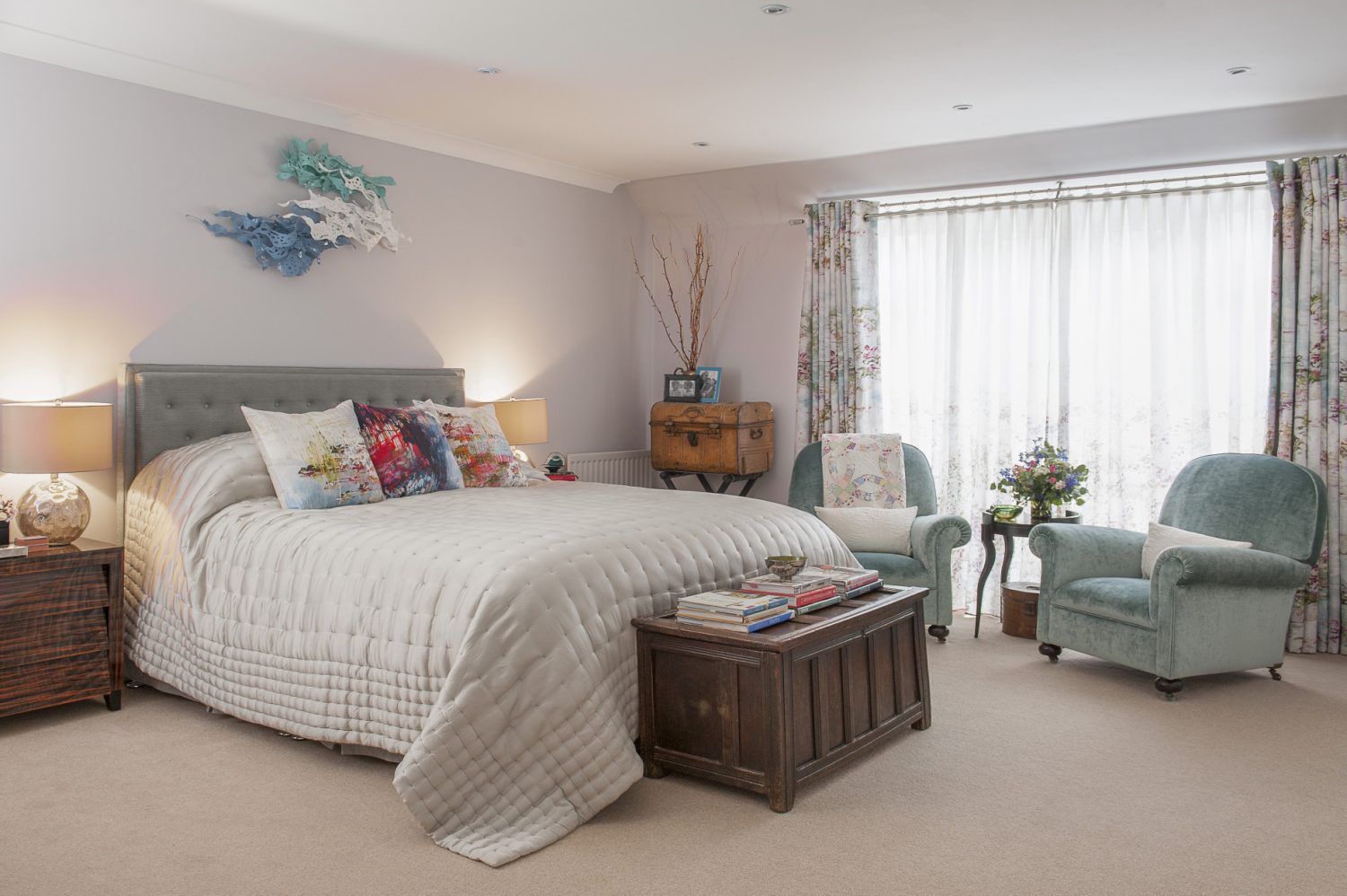 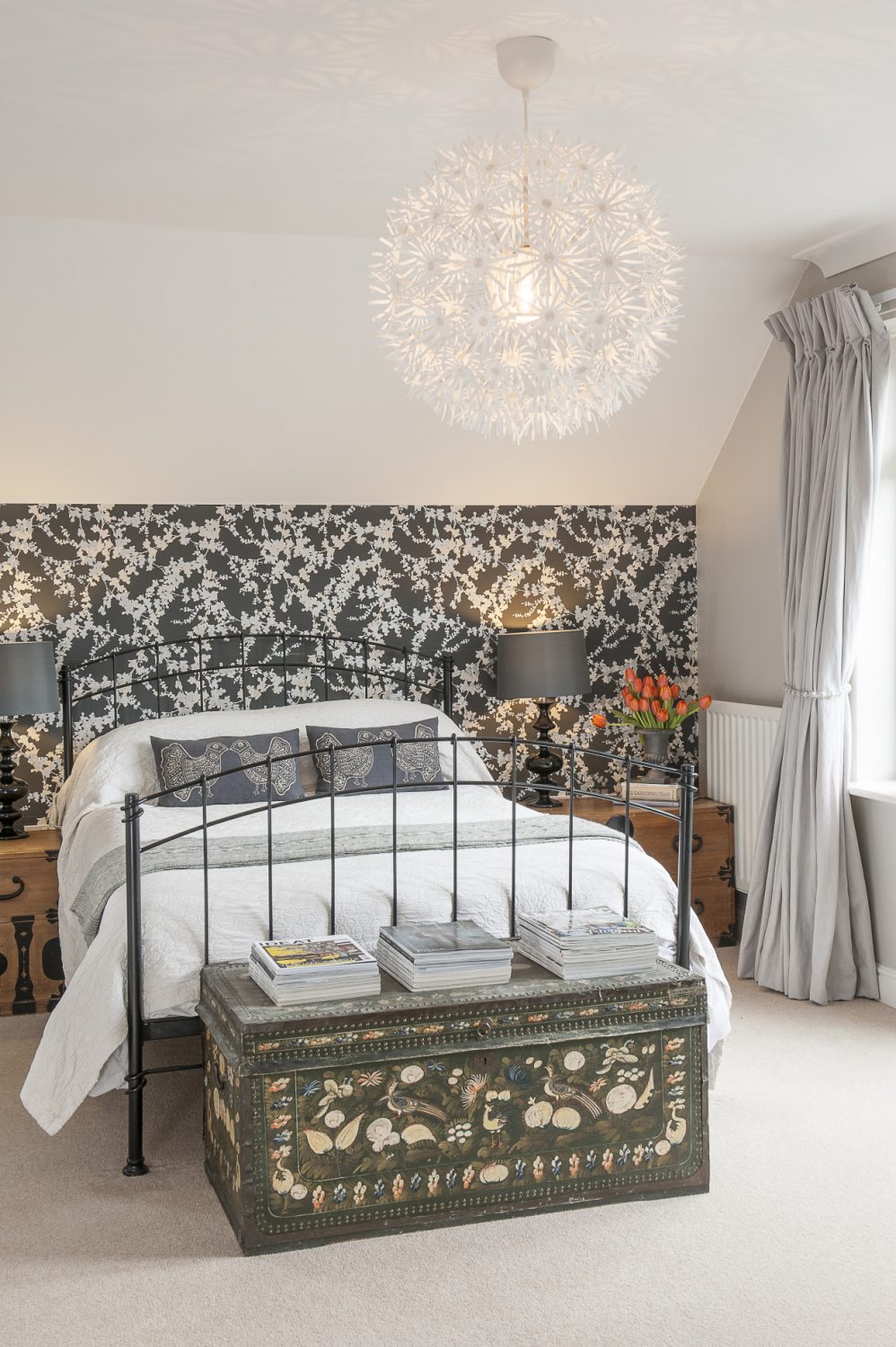 The immaculate guest room and its en suite have been created using products found on the high street – the wallpaper is ‘Hawthorn’ by Laura Ashley. At the end of the bed is an exquisite painted leather chest that belonged to Phoebe’s grandmother 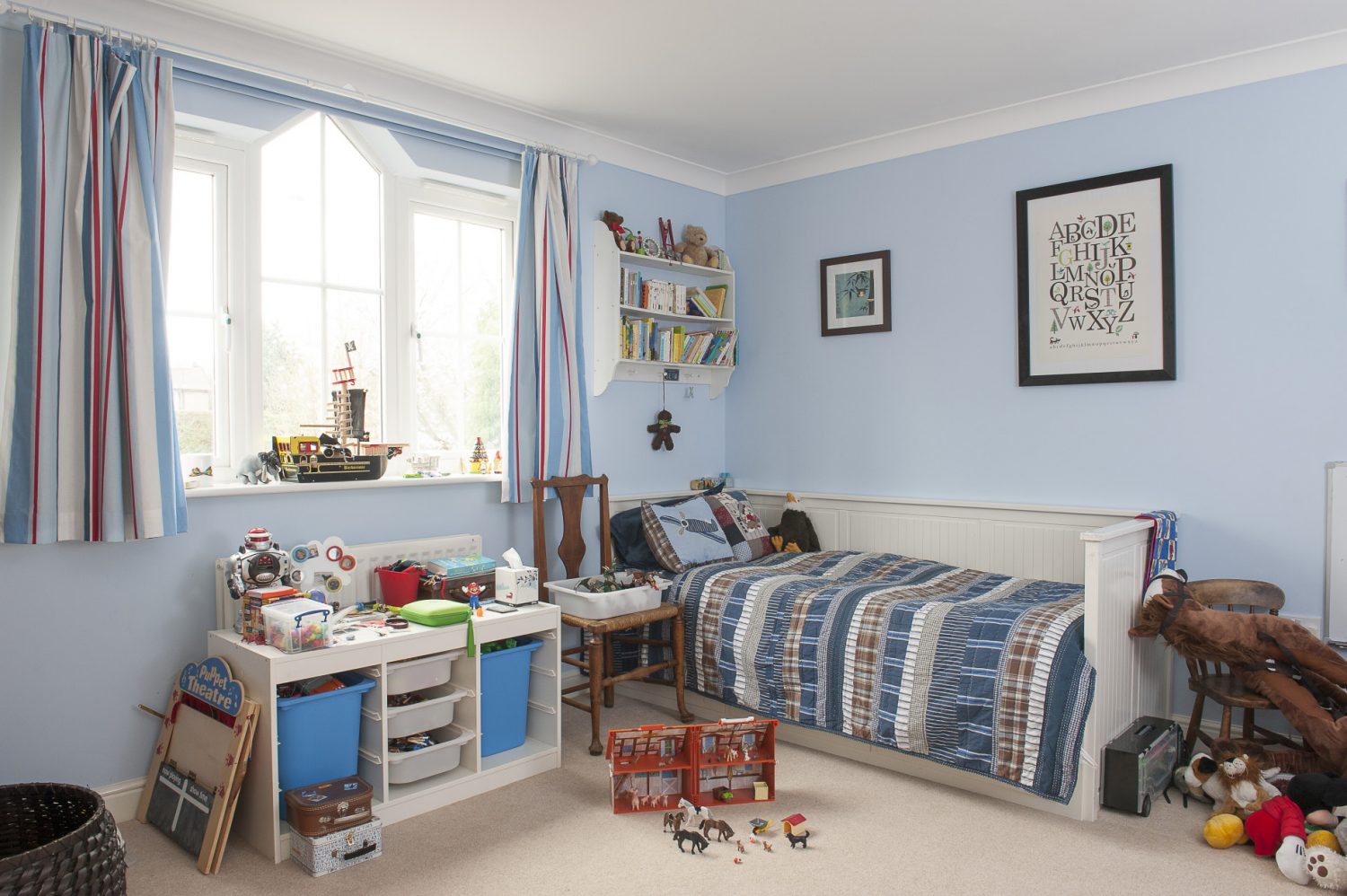 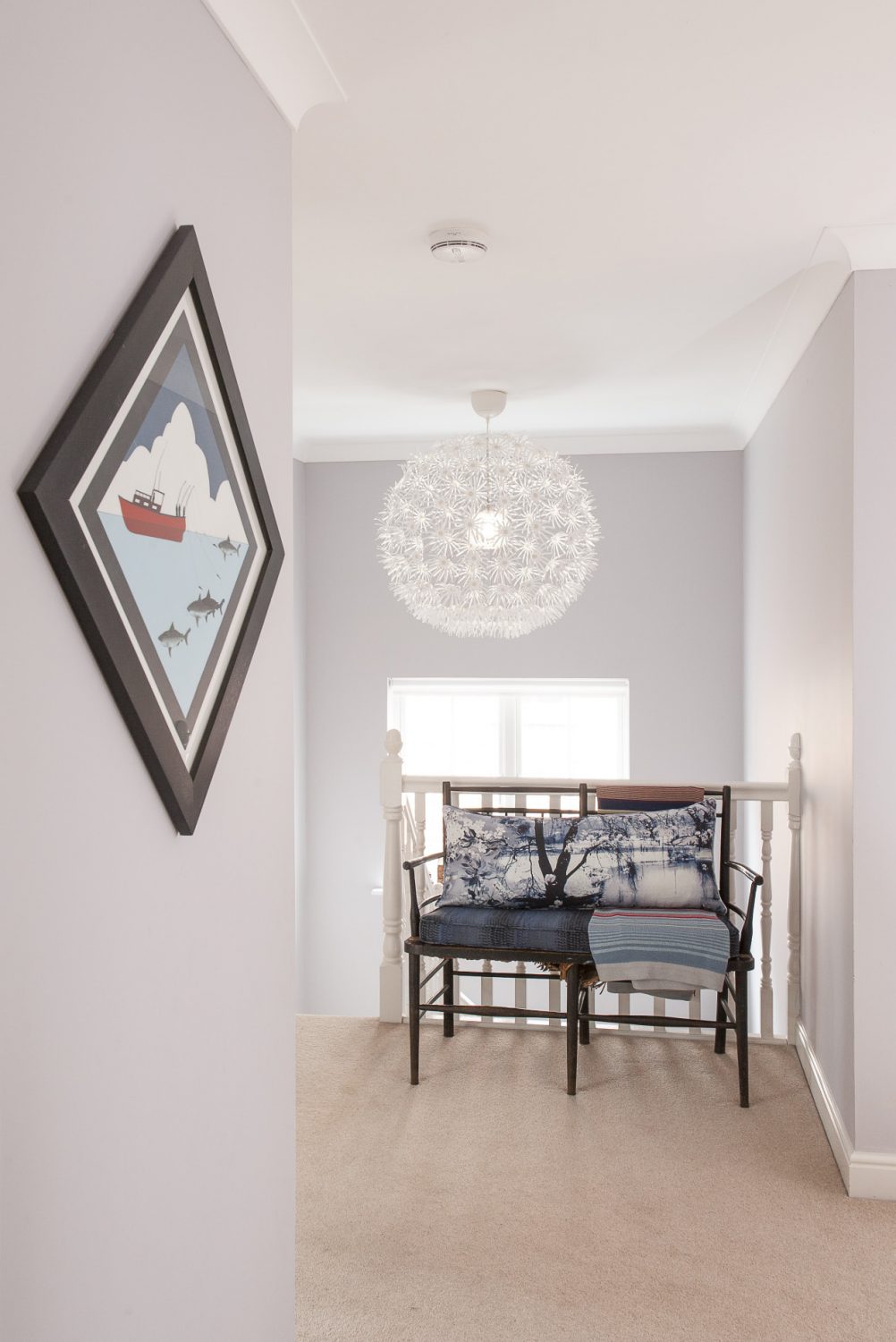 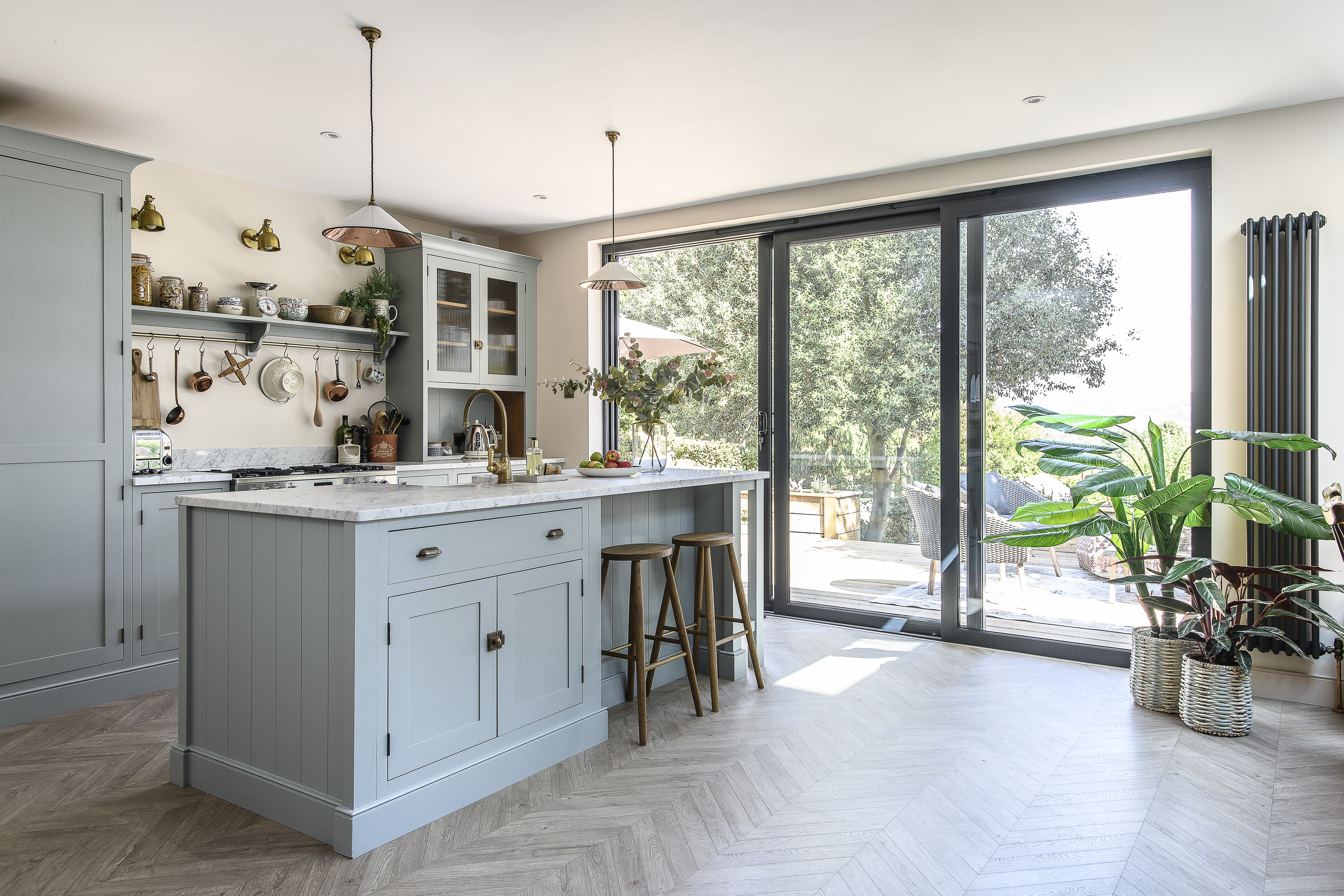 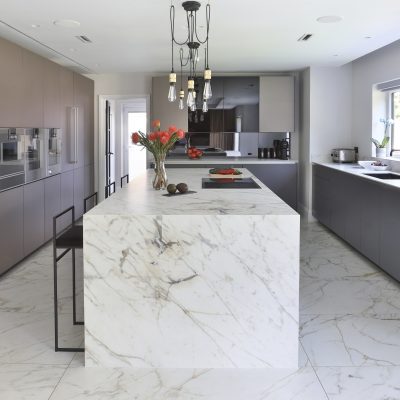 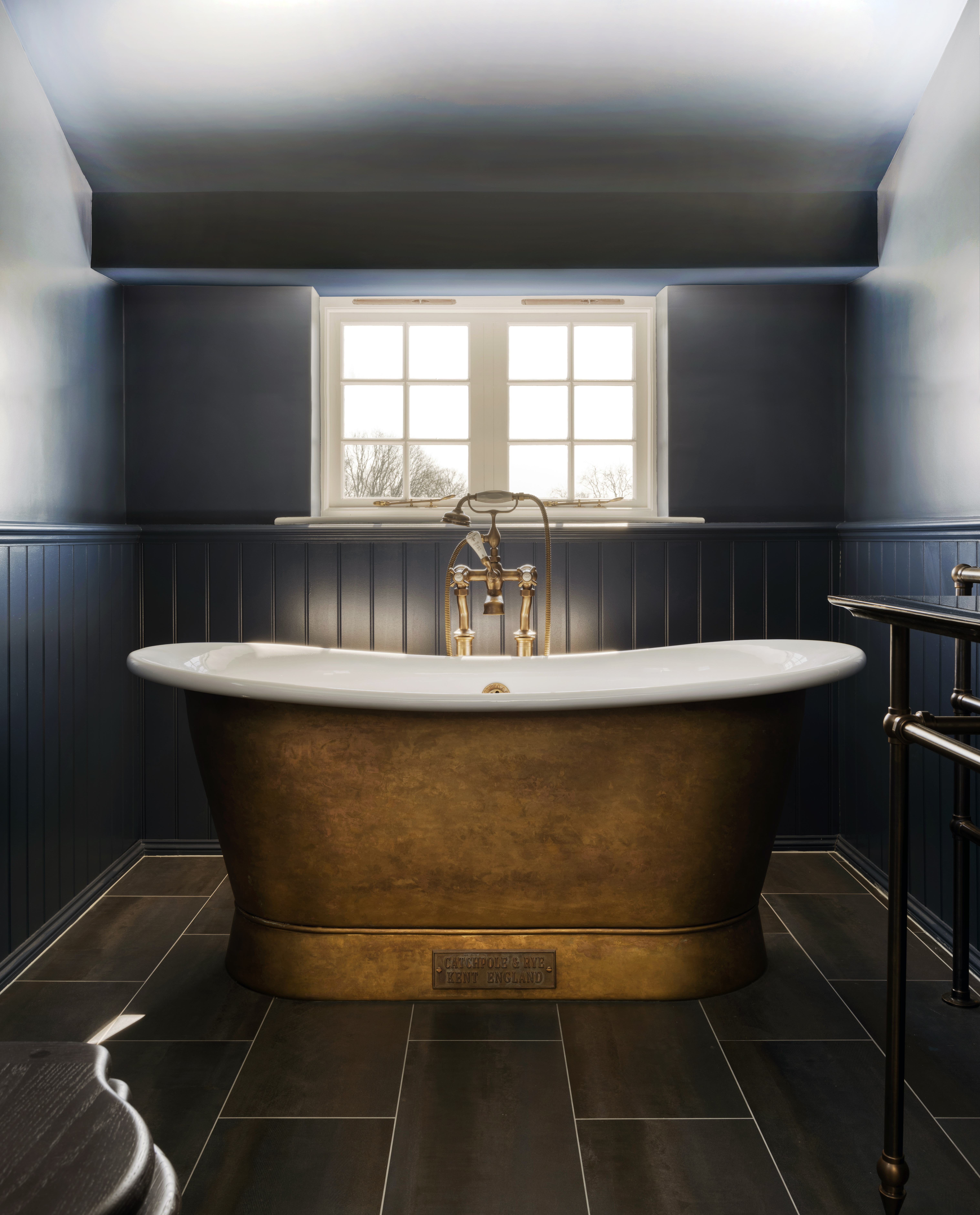