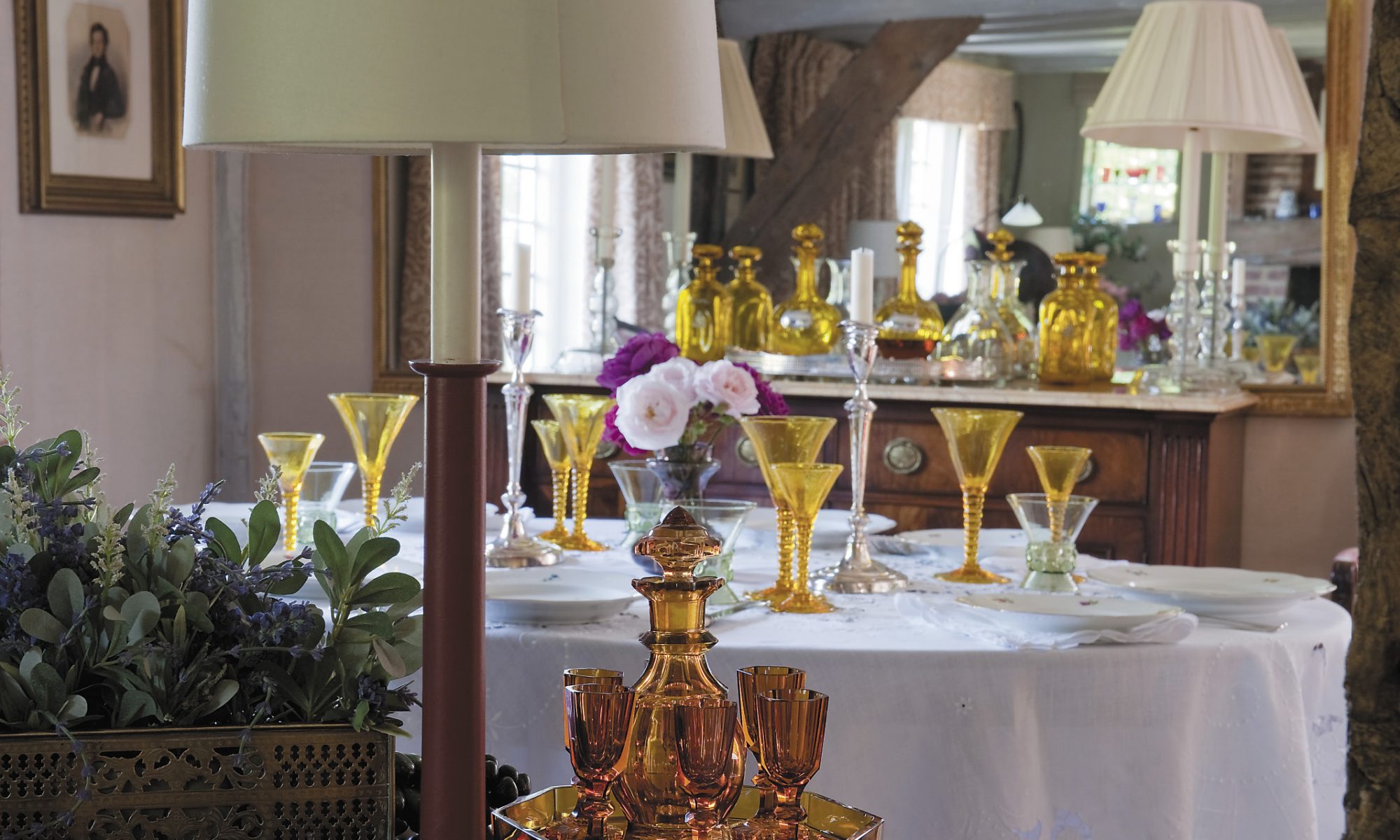 Having rung the bell at Sarnia’s cottage, seemingly without result, I am beginning to wonder whether I have made a mistake about our appointment. Knowing that she is an interior decorator, I am at least in no doubt that I have come to the right place: the front garden suits this pretty cottage on the marshes perfectly.

Just then I hear a friendly shout and Sarnia emerges from the side of the house with Tilly, the springer spaniel, supplying an even more effusive greeting. As I follow them to the back garden, I see that in the shade of a spreading apple tree a deckchair and cane seat have been placed in a conversational group, while a lavender-edged brick path leads the eye towards the unspoilt meadow beyond. It’s a quintessential English cottage garden that delights the senses. “One of our Dutch friends had a very long drive to see us and when he finally got here and saw the garden he declared that he had arrived in ‘paradise’!” says Sarnia.

Sarnia started an interior design business, Ketcher & Moore Ltd, with a friend Jeannie, in 1984. “Most of our commissions have been in London, but we spend so much time down here now, we’re gradually taking on more work in Kent and Sussex. I did a course in furniture restoration and learned how to upholster and then decorated my parents’ flat in London and as a result of that I was asked to do a huge house in Holland Park. It wasn’t easy to start with but we grew the business slowly and everything came through client recommendation. We now have clients in France, Holland and America and take on large projects like whole houses or really small ones like just a single room. It’s lovely to have the variety.”

I follow Sarnia inside to the kitchen. Opposite the door, a painted dresser displays a large collection of flowered china. “It belonged to my Dutch grandmother,” says Sarnia. “It’s a bit like Meissen in style, but simpler, and I love it because it not only has lots of flowers, but features all kinds of butterflies and creepy-crawlies too. Philip Maynard, a friend of ours, made the wooden dresser with Jeannie. We found a picture of a Scandinavian one and they copied it beautifully. Last Christmas our old cooker blew up and to accommodate the new range we had to sacrifice some cupboards. We decided to put a large cupboard at the other end of the room and we got this one from Ikea. Poor Philip had a terrible time adjusting it to fit our wonky dimensions and had to spend hours with his spirit level!” The kitchen units have been painted in the same duck-egg blue that Sarnia created by mixing two Fired Earth paints. Above the kitchen sink, a cupboard has been painted ox-blood red. “I’m hoping that our friend Kate Whapham, a gifted artist and graphic designer who not only did a picture of the house but a wonderful one of Tilly, will create a Dutch-style design on it,” Sarnia adds.

In the dining room an oval table is set with Bohemian amber glass. A vase of blousy John Galsworthy and Falstaff roses from the garden form a centrepiece. French fauteuil chairs are covered with old rose toile fabric on one side and checked material on their backs. A huge mirror hangs above a marble-topped buffet on which a fine collection of glasses, decanters and carafes has been carefully arranged.

In the drawing room a remarkably tall winged chair has been covered in a brick-red Percheron fabric. “It’s a Dutch farmhouse chair – ideal for weary farmers because the back drops right down to make a bed,” Sarnia explains. Another wine-coloured Percheron fabric covers a club chair and sofas are upholstered in Colefax & Fowler plain linen and checks. “I’m afraid some of our sofa cushions looked a little shabby after Tilly had been lying on them, so luckily our friend, Ann Grafton, managing director of the GP & J Baker group, has lent us some rather splendid Mulberry cushions – she has access to some wonderful fabrics.”

A wood-burning stove stands in the fireplace and in one alcove a tiny window displays a collection of cranberry, turquoise, emerald green and cobalt blue coloured glass. “It’s my little homage to Sissinghurst,” Sarnia explains. “If you climb the tower there, you see Vita Sackville-West’s collection of coloured glass displayed in the window so that the light shines through it. I loved it so much I thought I would create my own. They’re not valuable pieces, many are gifts from friends or I selected them for their colours and because they add interest to an otherwise unremarkable corner.”

Above a bookcase, on another wall, a pair of candle sconces illuminate a portrait of Sarnia’s Dutch grandmother. The daughter of a successful Dutch trader in the East Indies and born in Sumatra, Dora Cremer later became a lady-in-waiting to Queen Wilhelmina of Holland and in her pale pink organdie gown she looks every inch the debutante.

As we climb the stairs we pass Dora’s court fan, displayed in its own fan-shaped glass case. Above it an exquisitely pretty gilt mirror reflects light back into the landing that has been painted (of course) a warm Dutch pink.
Sarnia and Jeannie sacrificed a small bedroom to relocate the bathroom up here, to the first floor, but are convinced that it was worth it. On one wall hangs the painting of the house by Kate Whapham mentioned earlier, and on another, a montage of photographs of friends and clients.

The guest bedroom is furnished with more of Dora’s furniture – a prettily carved wardrobe and chest of drawers. The cool Gustavian grey-blue – Farrow and Ball’s Light Blue – in which they have been painted makes the room feel much more spacious. On the wall is a pair of delicately executed watercolours of pale pink cyclamens painted by Sarnia’s mother. “My mother and grandmother loved to paint and draw and gave me a love of beautiful and stylish things, I think,” Sarnia reflects.

Sarnia’s bedroom is luxurious but shares the others’ sense of quiet restraint. The bed is dressed with layers of white linen and cotton. Above it, a simple coronet supports a cascade of white spotted voile, the edge of which has been deliberately left ragged. “I didn’t want it to look too perfect,” Sarnia explains. Either side, there are portraits of her as a child and adolescent. “I went to see Peter Pan when I was about eight and insisted on a short, gamine haircut,” she laughs. More family photographs dominate the dressing table and dainty chest of drawers. The fabric used for the curtains is “Climbing Geranium”, a now discontinued Colefax & Fowler pattern. Luckily, I had just enough for these.” The ceiling beams here, as downstairs, have been given a pale treatment. “We found the blackened beams so oppressive,” recalls Sarnia, ‘so removed the stain, bleached them and applied a lime wax. It gives the impression of a higher ceiling, I think, and is much more in the European tradition.”
Downstairs, there is one more room to see before we go back into the garden: just off the kitchen, a conservatory that has been tented with blue and white striped Jane Churchill fabric. A grapevine clings to one wall though the weight of the swelling fruits seems to threaten to pull it over.
“We sometimes use tenting in our schemes for clients and it’s a great way to change a room quite dramatically. Blue and white is a calming combination and at the height of summer it’s cooling too. We often eat here by candlelight with friends so it’s wonderfully atmospheric.”

Just before I leave, we wander along the garden. “It was rather utilitarian when we arrived, so our friends Sue Skeen and her husband suggested a Gertrude “Jekyll-esque” curved bed of lavender. I sourced the plants from that marvellous lavender farm near Tonbridge. I think it’s really important to use locally grown plants because then you can be pretty sure that they will cope with your own conditions. Brogdale gave me some excellent advice on the fruit trees and we planted a damson, plum, quince and greengage – all semi-dwarf varieties because they needed to be in scale to the rest of the garden.” A long flower border is stocked with the stalwarts of the cottage garden: roses, paeonies, loosestrife, love-in-a-mist and poppies are punctuated by taller plants such as foxgloves and hollyhocks. Jeannie takes responsibility for vegetable and soft fruit beds with runner and French beans, courgettes, garlic, lettuce, rocket and tomatoes, as well as standard gooseberries and raspberry canes. Set against a sheltered hedge, the beds have been edged with a low border of box.

At the end of the garden, a glorious wildflower meadow stretches as far as the eye can see. “We’re very lucky to have such a view,” acknowledges Sarnia. “I think our Dutch friend was certainly close to the truth when he called it paradise.” 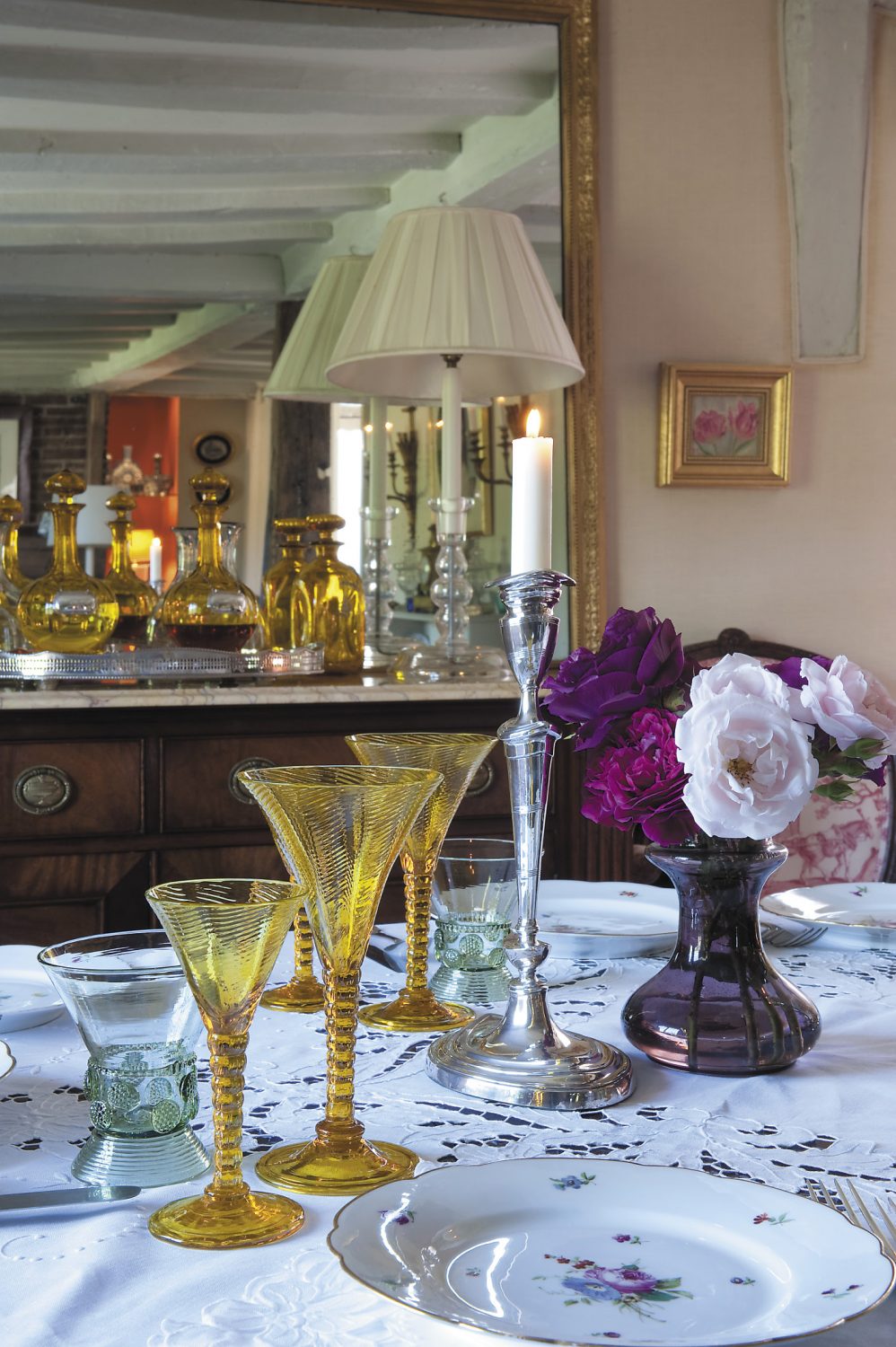 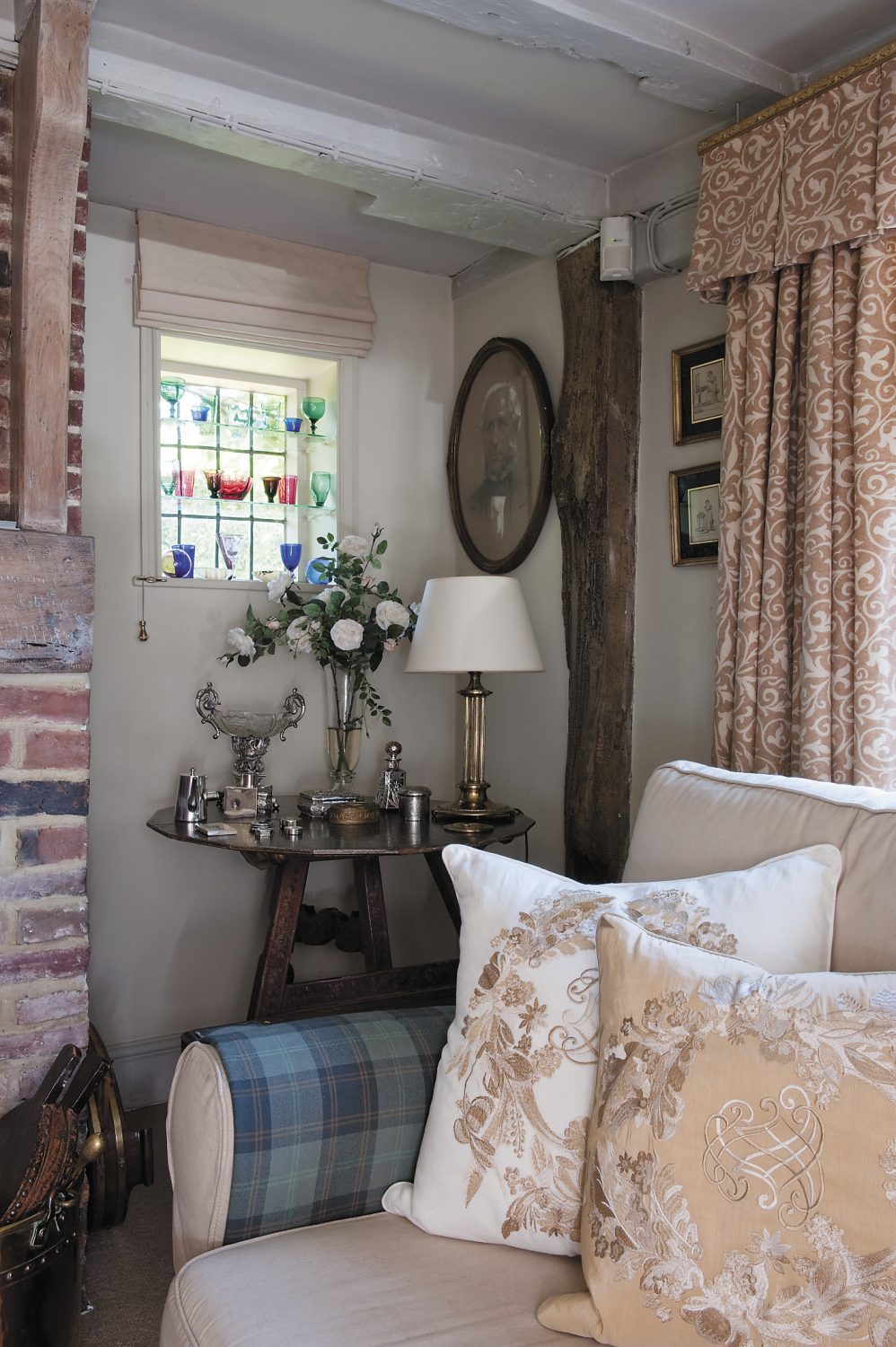 In one alcove a tiny window displays a collection of cranberry, turquoise, emerald green and cobalt blue coloured glass 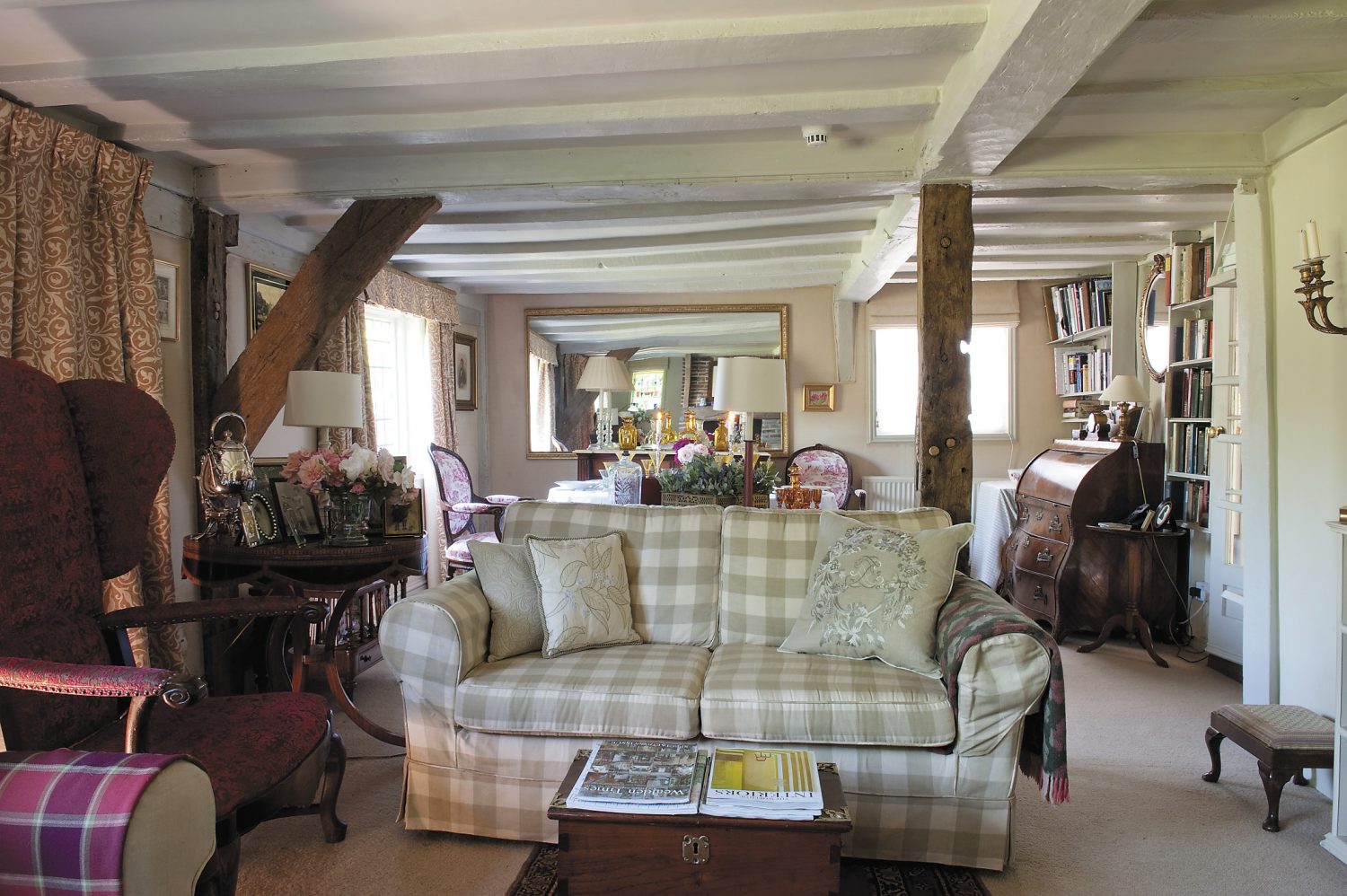 In the drawing room a remarkably tall winged chair has been covered in a brick-red Percheron fabric. The sofas are upholstered in Colefax & Fowler plain linen and checks 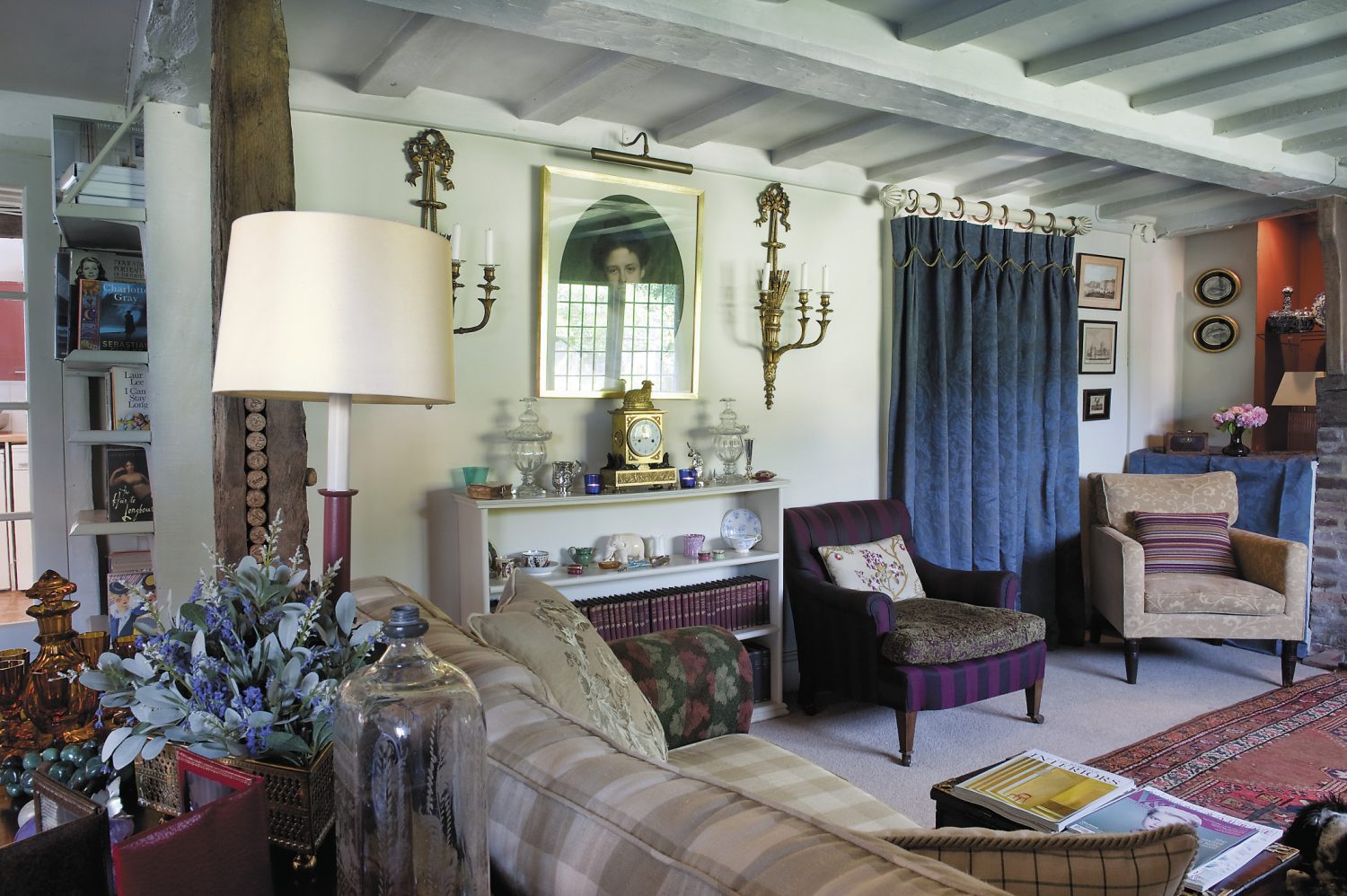 Some of Sarnia and Jeannie’s sofa cushions looked a little shabby after Tilly the springer spaniel had been lying on them, so luckily their friend, Ann Grafton, lent them some rather splendid Mulberry cushions 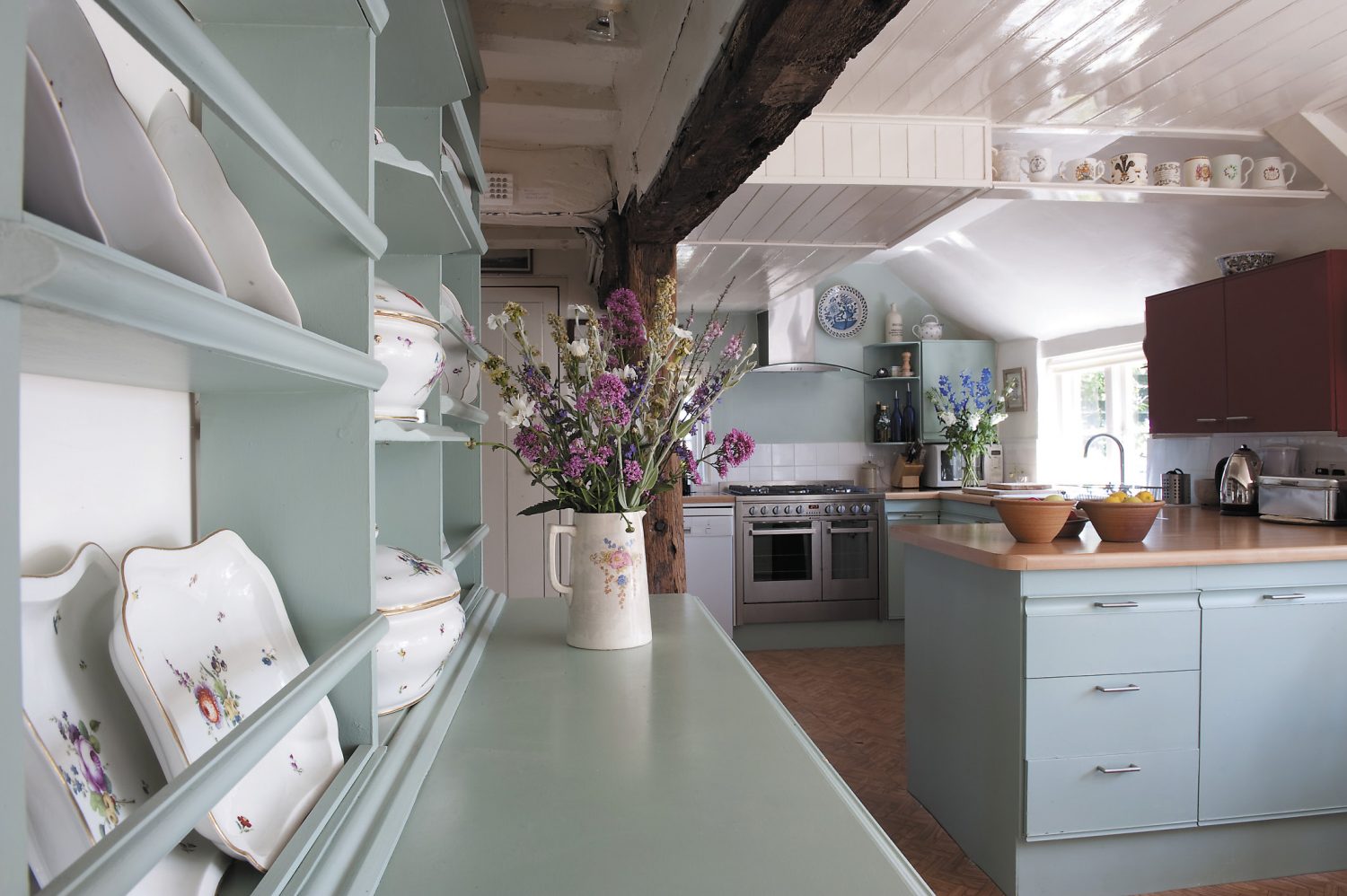 In the kitchen, a painted dresser and units display flowers from the garden 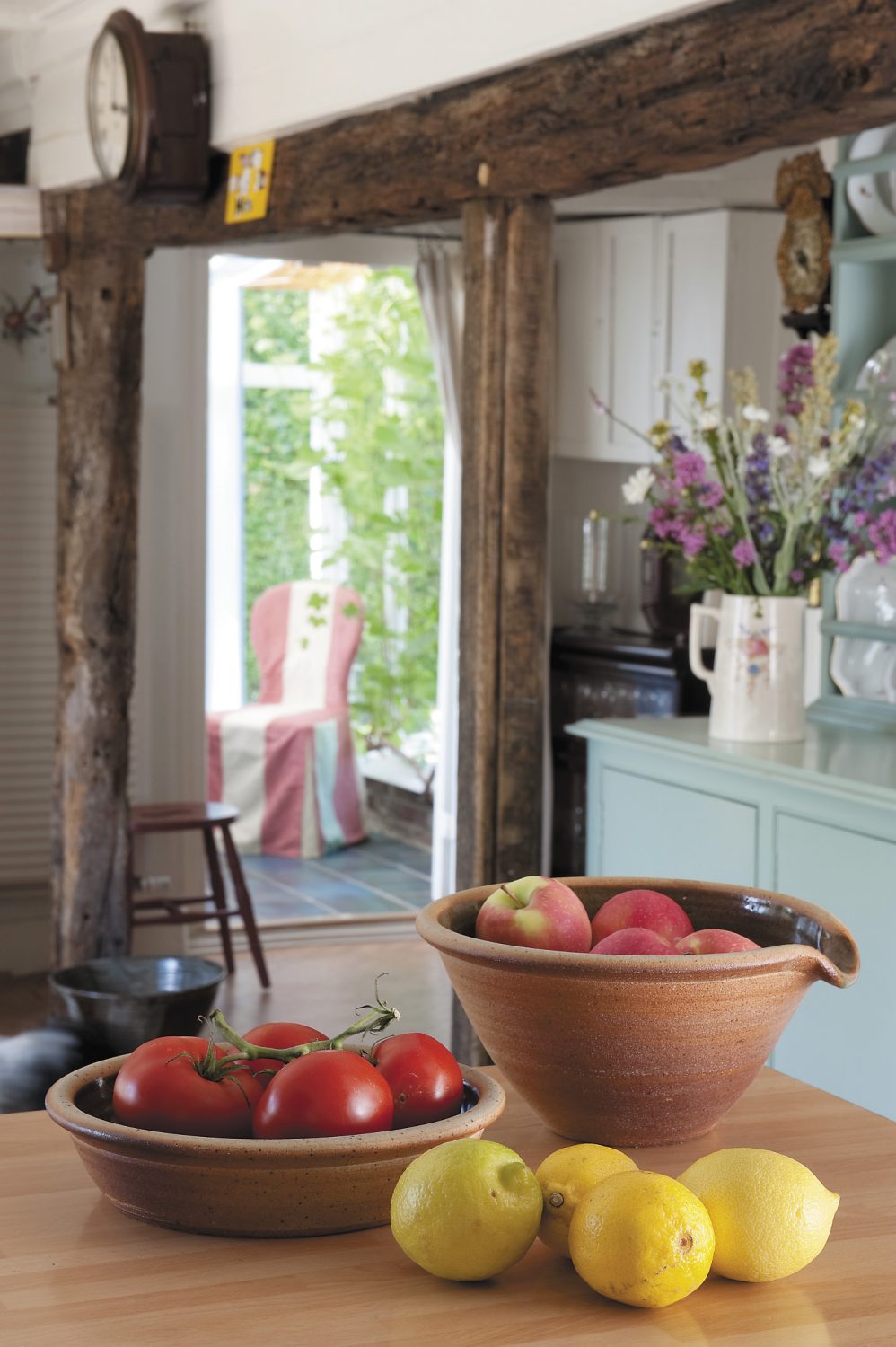 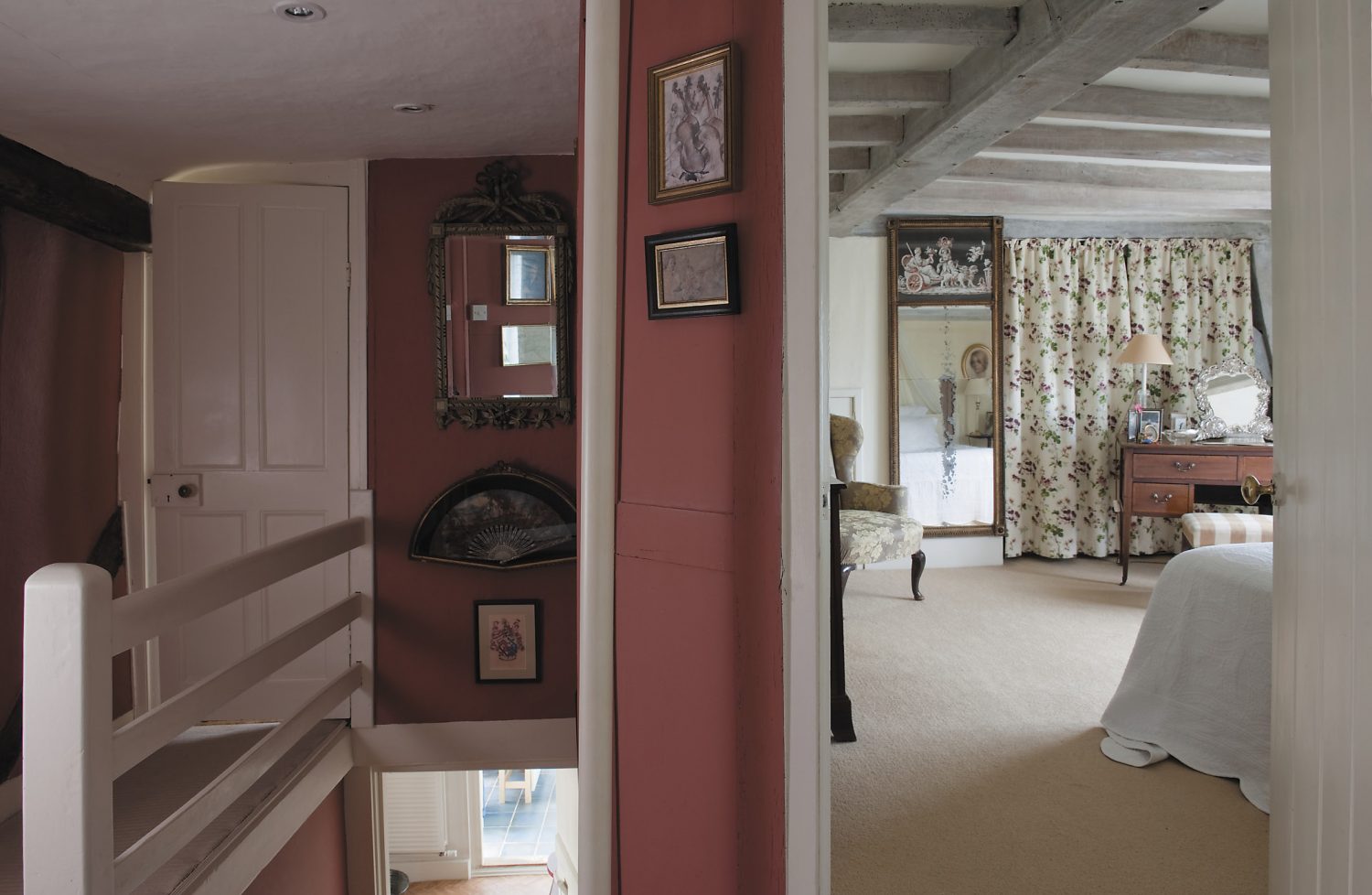 Sarnia’s grandmother, Dora’s, court fan is displayed in its own fan-shaped glass case above the stairs 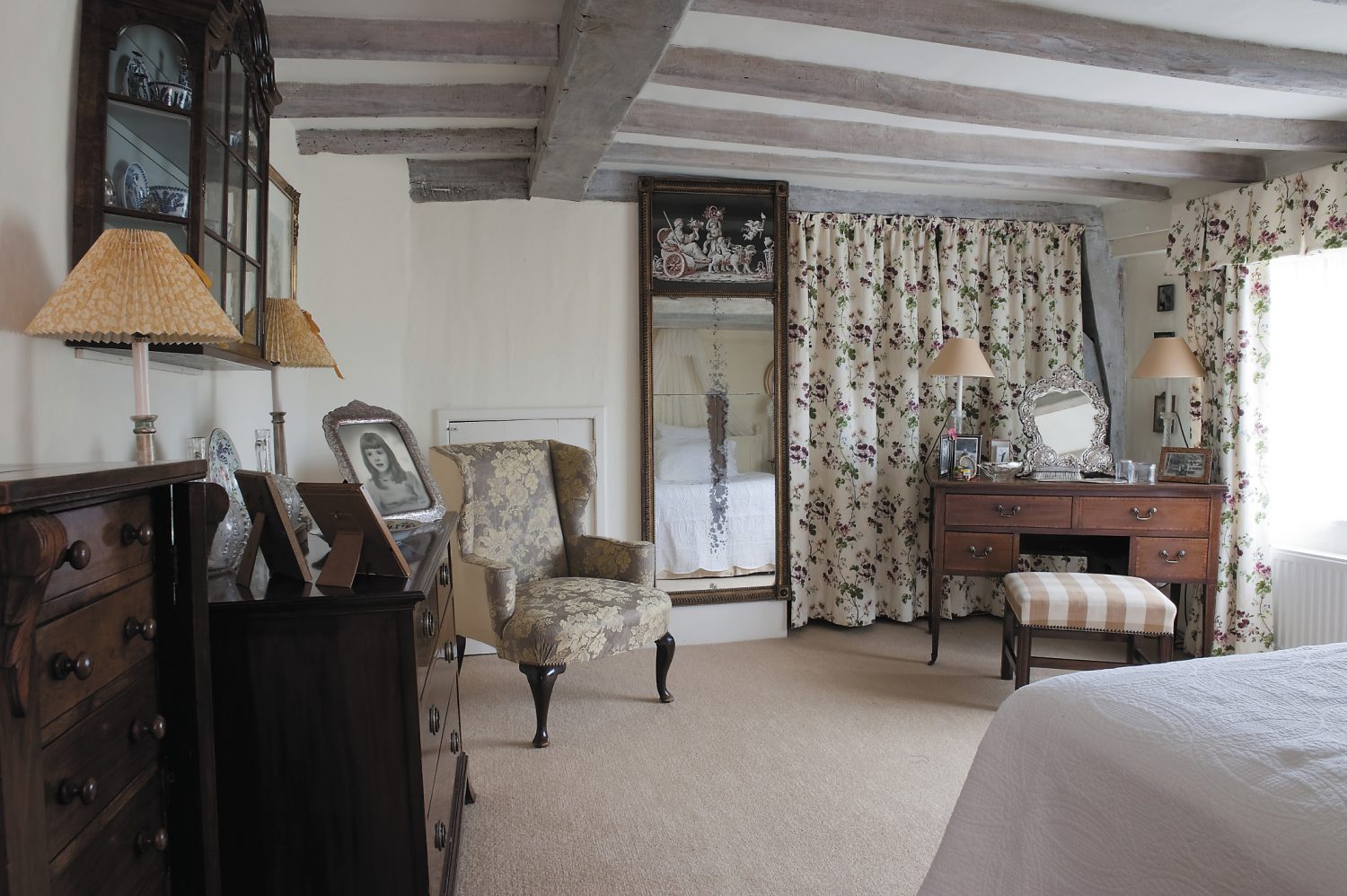 Sarnia’s bedroom is luxurious but shares the others’ sense of quiet restraint. The bed is dressed with layers of white linen and cotton 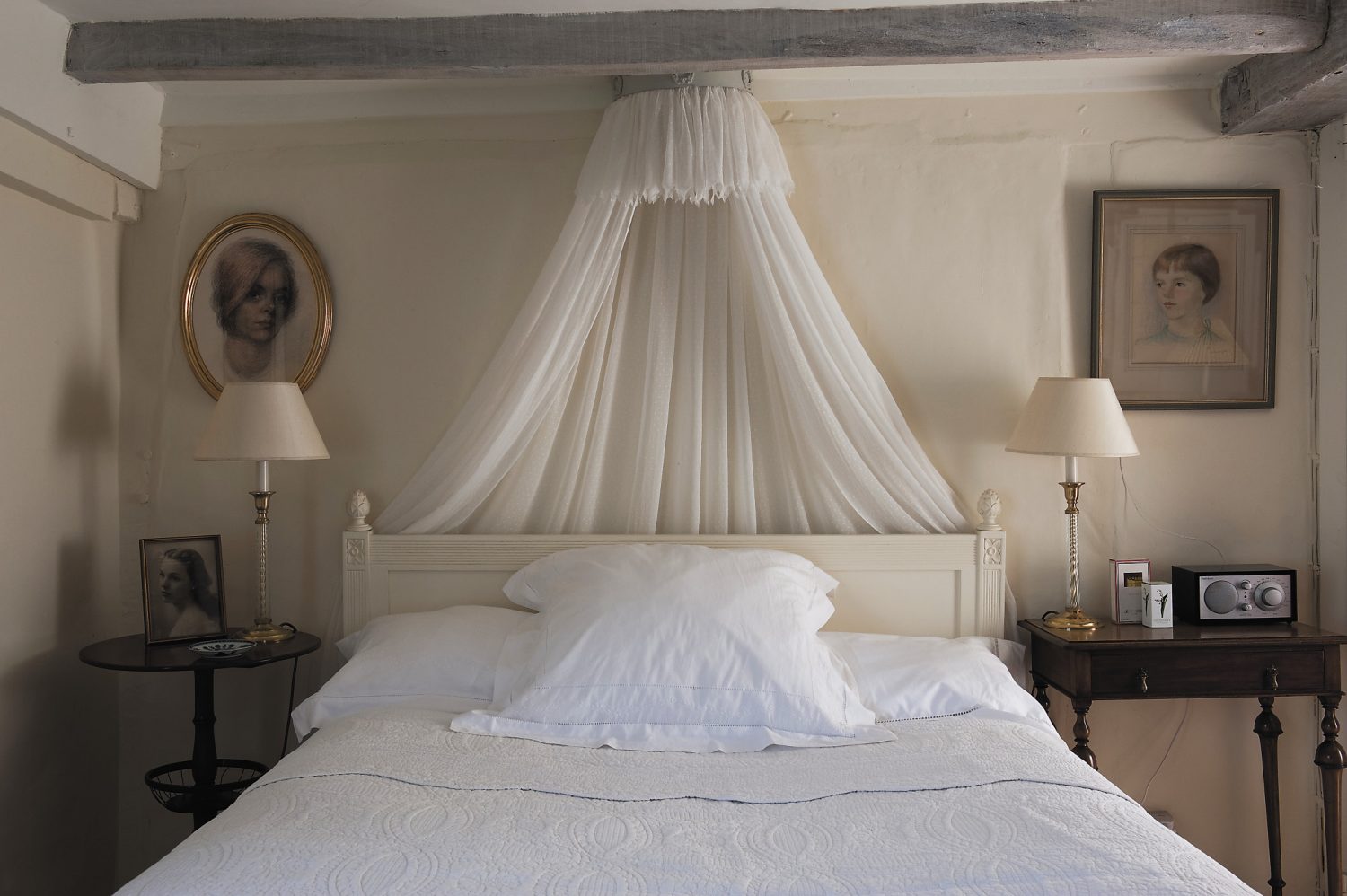 Above the bed, a simple coronet supports a cascade of white spotted voile, the edge of which has been deliberately left ragged 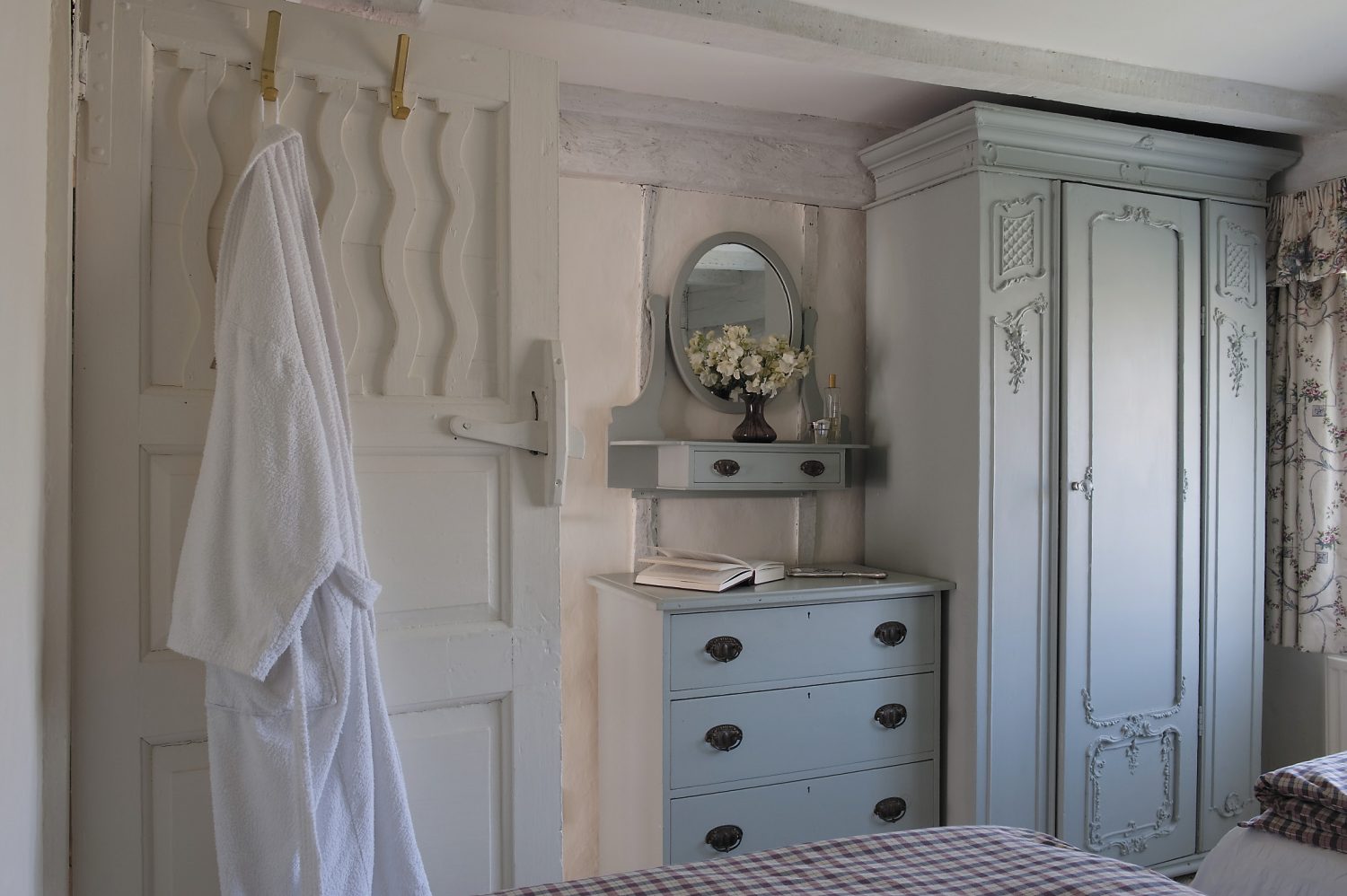 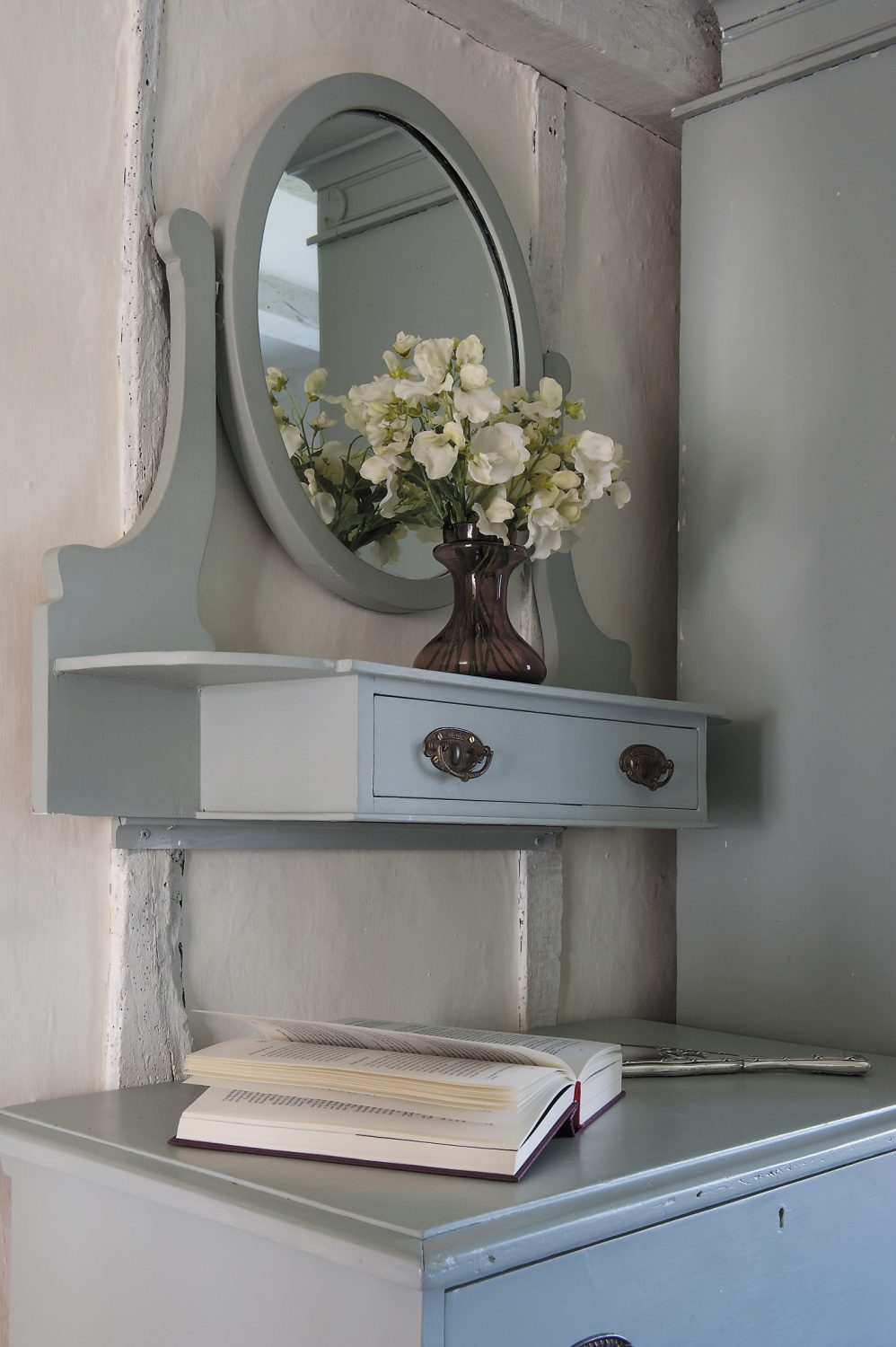 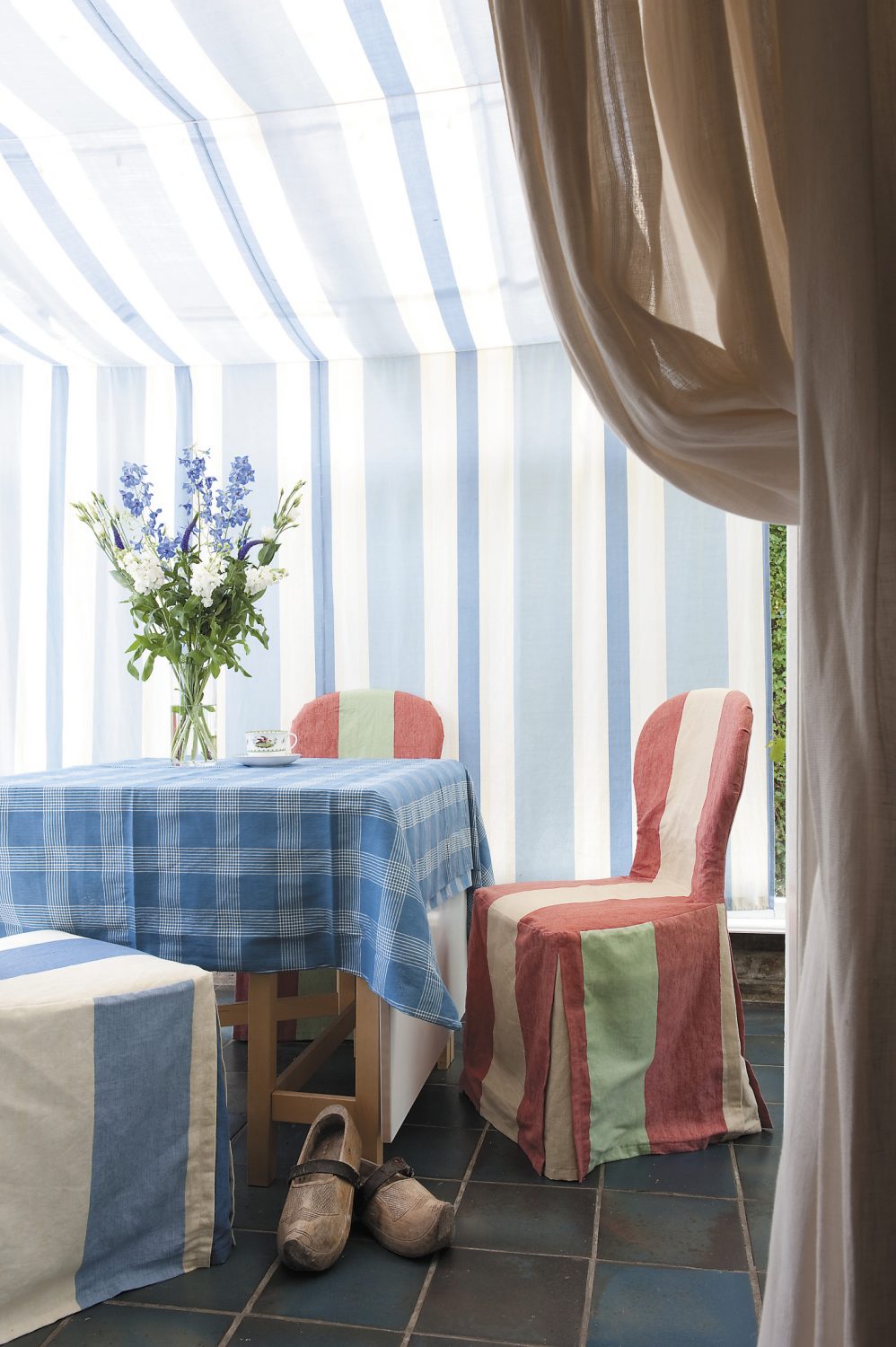 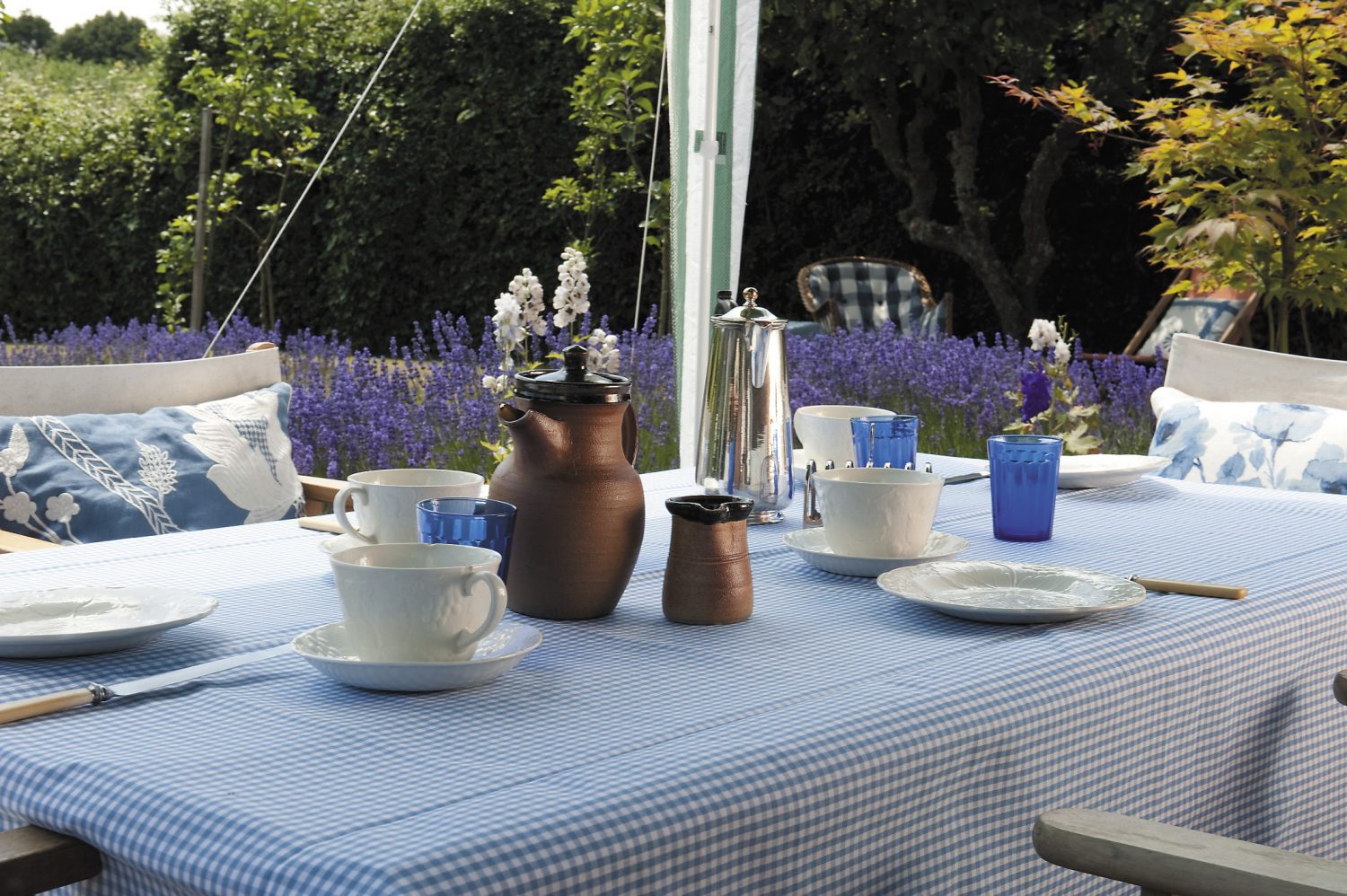 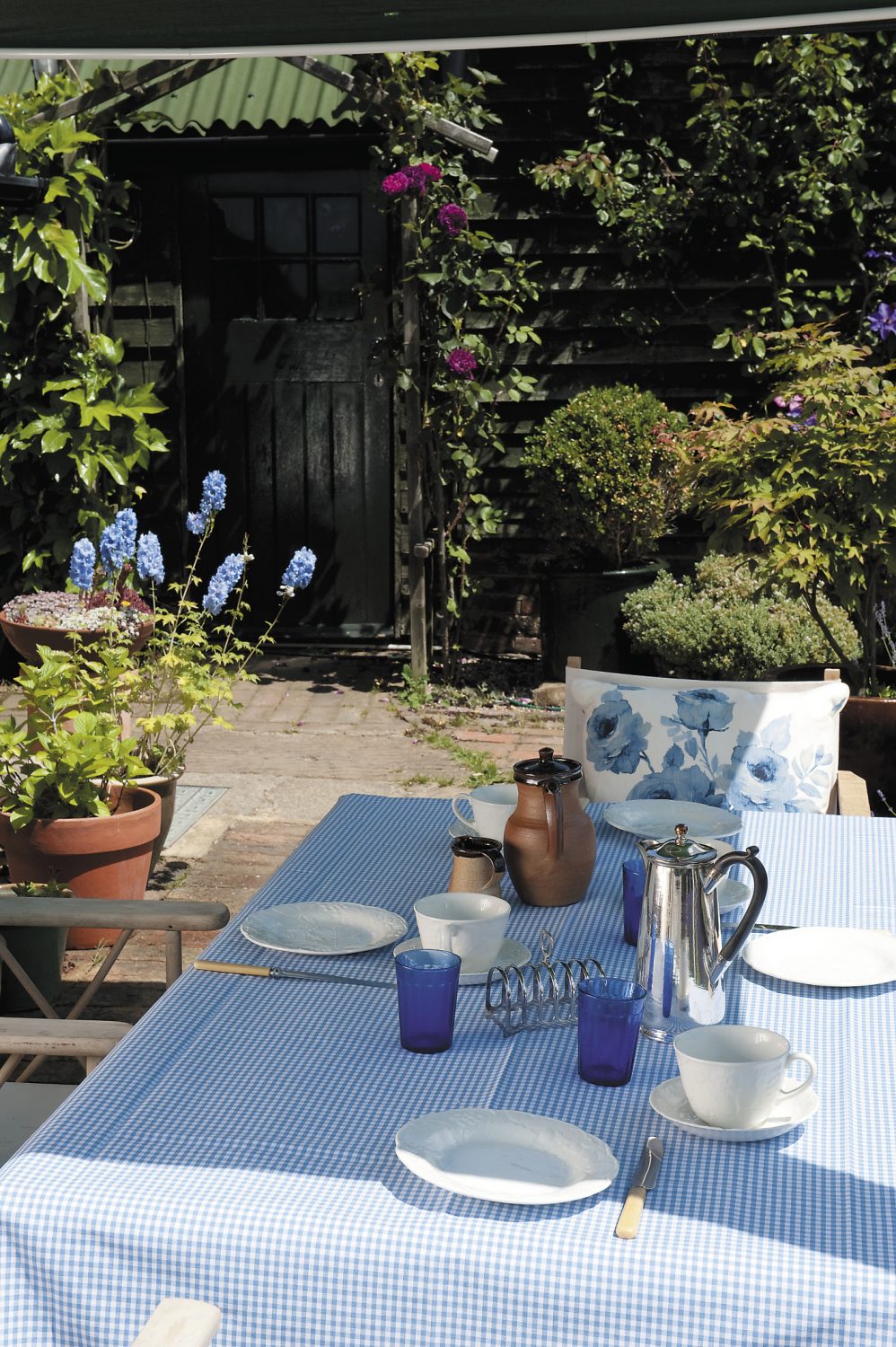 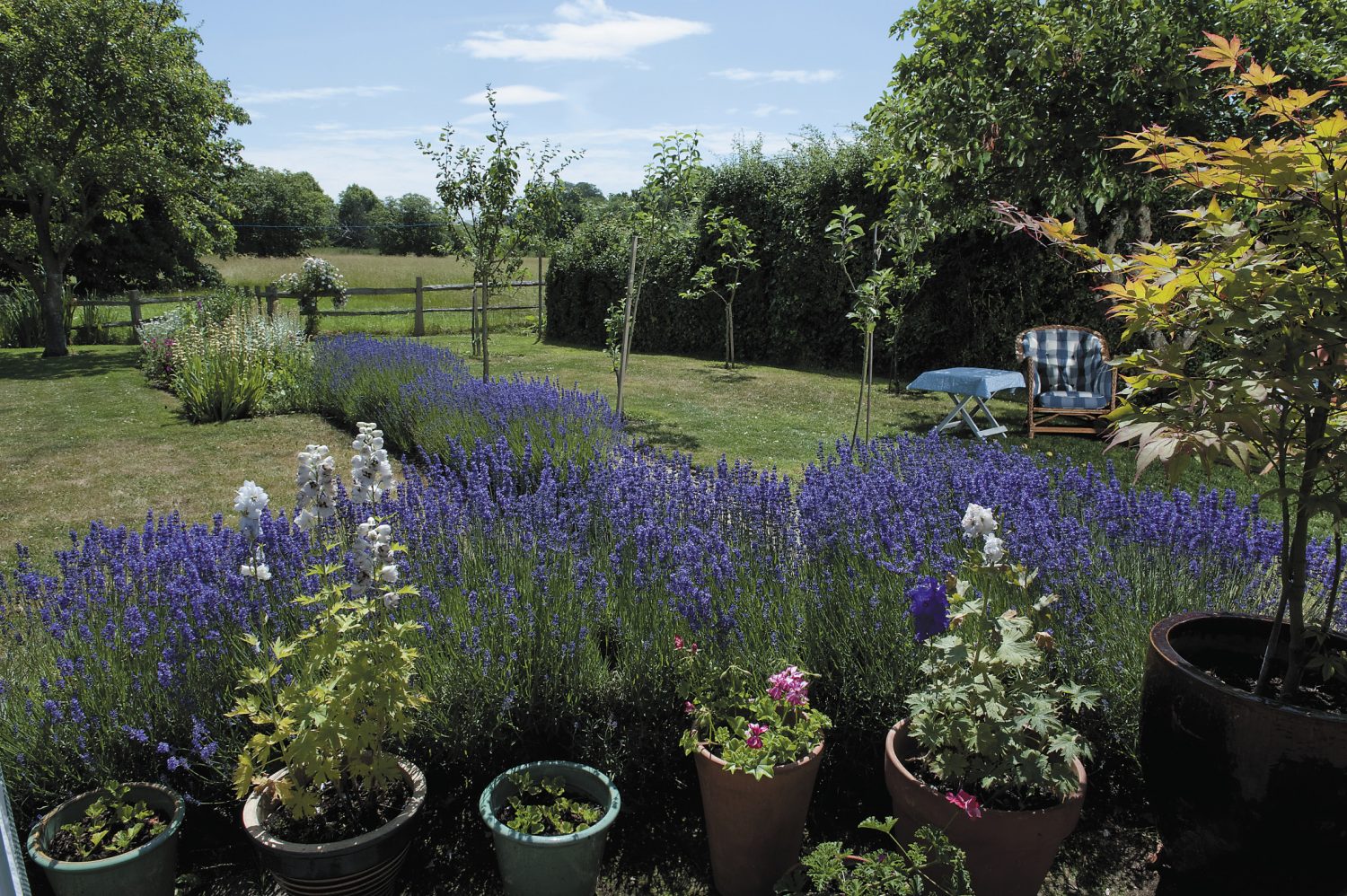 “One of our Dutch friends had a very long drive to see us and when he finally got here and saw the garden he declared that he had arrived in ‘paradise’!” 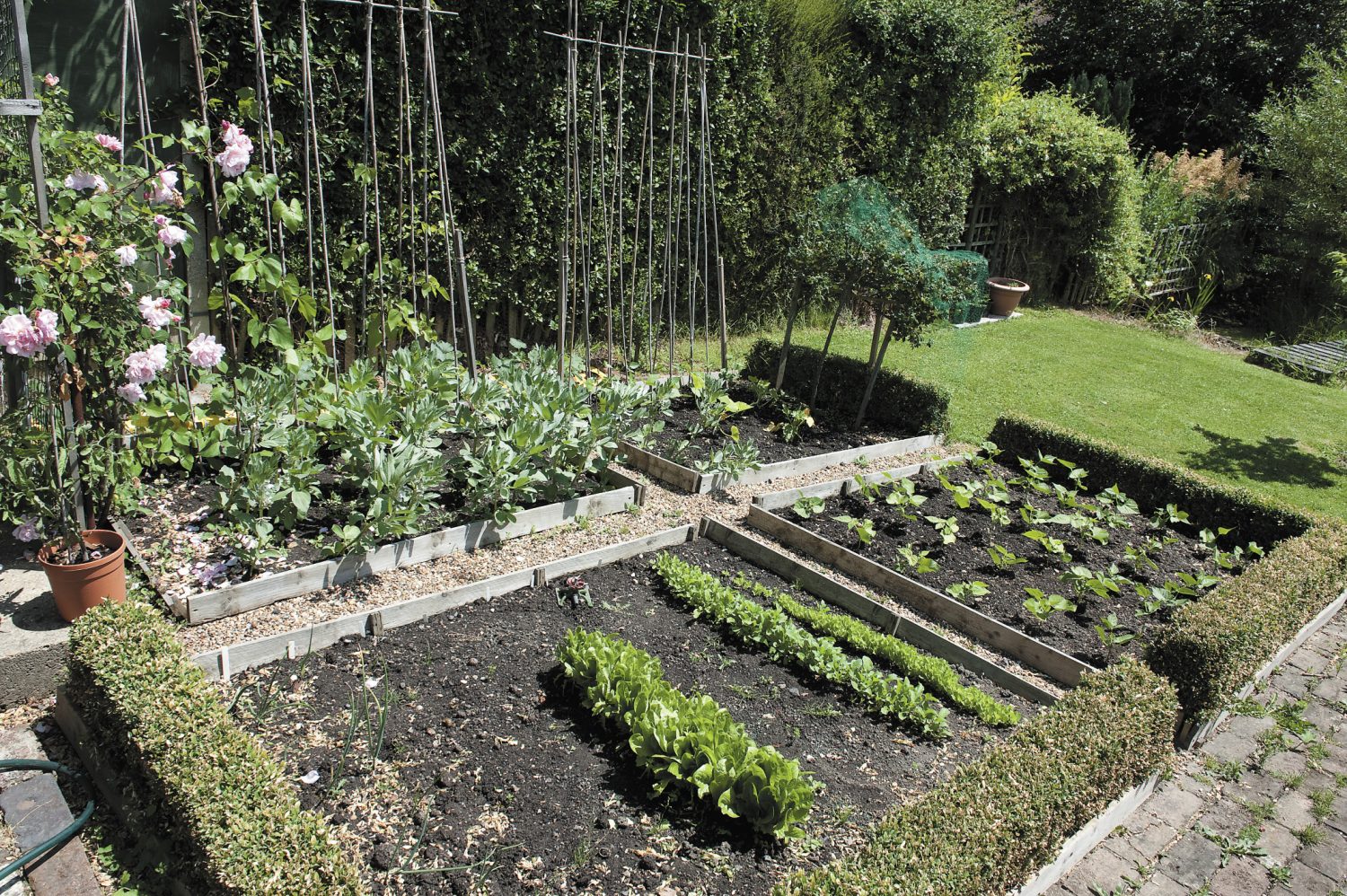 Against a sheltering hedge, vegetable and soft fruit beds with runner and French beans, courgettes, garlic, lettuce, rocket and tomatoes, as well as standard gooseberries and raspberry canes, have been edged with a low border of box 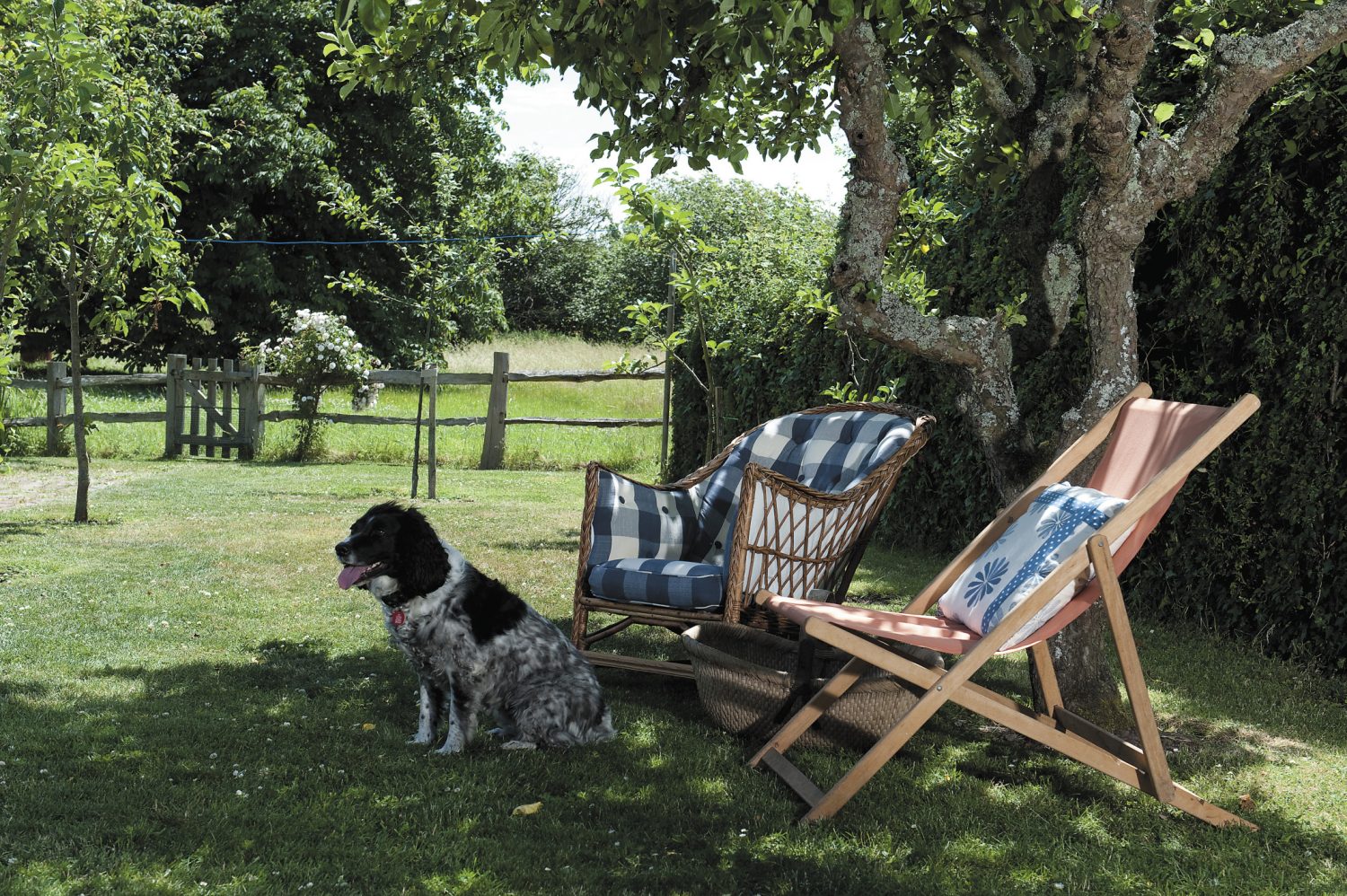 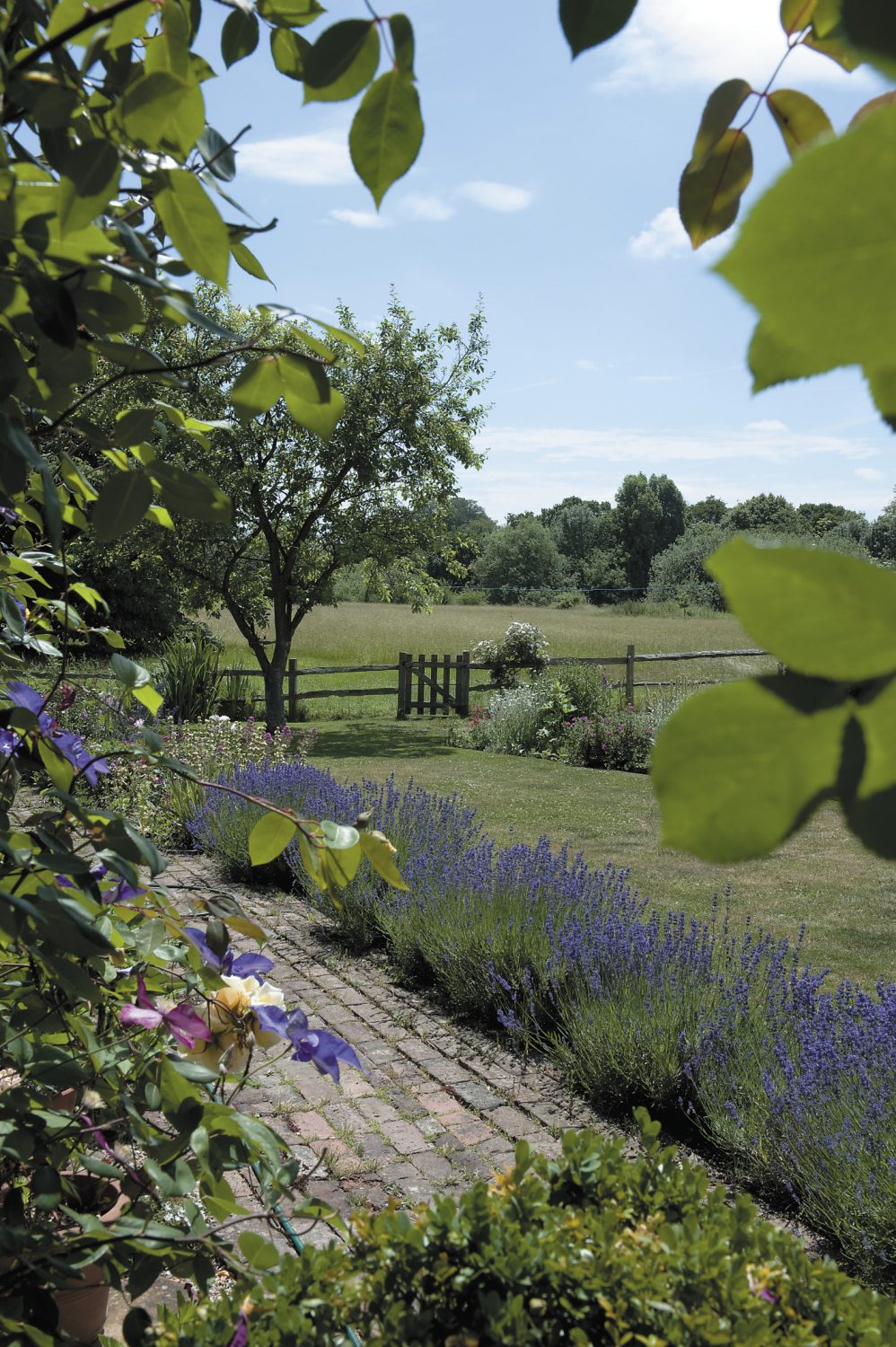