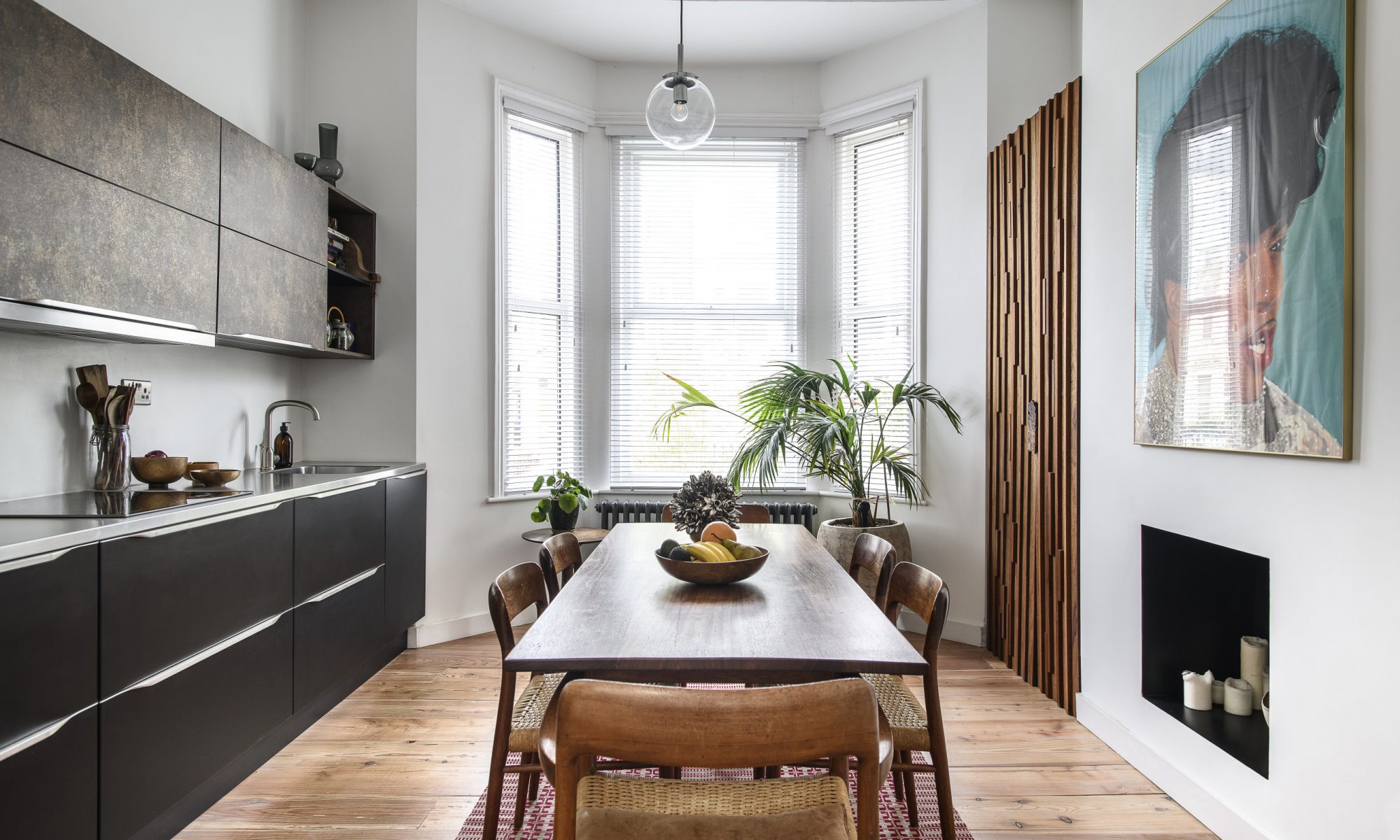 When it comes to the dream team of people to transform a run-down maisonette into an apartment with the kind of quiet sophistication normally seen only in big cities – Beatrice Ancillon and John-Aldredo Harris are pretty much it.

The combined effect of their different specialist expertise can be seen in every square metre of the apartment (it really isn’t a flat…). Immediately inside the front door, on the wall to the right is an installation of hand-turned wooden mushroom-shaped pegs, of different sizes, creating a practical area for hanging coats and bags, which is more like an art installation.

Enlivening the wall on the other side of the hallway is a collection of 1970s Czech film posters, which Beatrice found at a Paris auction house.

So there you have it already, in that first small area, the dual specialities coming together to create a space that works efficiently to live in – and looks beautiful while you are doing it.

You are also immediately immersed in the very specific atmosphere of the home, which feels calm and relaxed – the result of quiet confidence, rather than angsty striving. There is no try hard here.

But while it may feel coolly nonchalant, it did take effort to achieve, as Beatrice remembers: ‘We have just sold it because we want more space, a whole house, but it was a wrench to let it go, because we did a lot to it. There was a lot of work – electrics, plumbing, knocking through.’

Yet despite all the work they did here, she admits there’s another factor she’s looking forward to with a new place: ‘We want to tackle another project.’

This apartment is the two lower floors of a Victorian terrace in one of the many streets in St Leonards-on-Sea which are currently awakening from decades of being very run down.

In this one the integral elegance of the buildings is starting to shine out again as the delights of living within walking distance of the beach and myriad cool places to eat, drink and shop come to the fore.

Beatrice says the area has improved hugely in the four years they’ve lived there, of the seven they’ve been in Hastings, which is good to know, because their route to the increasingly fashionable seaside town was more random than the usual ‘I went there as a child…’ or ‘we visited friends there…’ explanations.

‘Previously we lived in Hertfordshire,’ she says, ‘but after 20 years in London it was too rural and remote. We thought of Brighton, but it was too expensive, then someone mentioned Hastings – I had never heard of it! Then we realised we already knew people here and we could afford it, so we came to look.’

Like many people who are slightly surprised to find themselves living there, the new mecca for artistic types has now worked its unique charm on Beatrice.

‘I never thought I would love living by the sea, but I do – and it is also the second sunniest town in Britain, which is great.’

Making the most of the outdoor areas to enjoy that sunshine was clearly a priority for John-Alfredo, who has created an amazing garden at the back of the house, by carving what Beatrice says was just a ‘steep slope’ up into three terraces, accessed by concrete steps.

Each side of the space is defined by wooden fencing in two style and it has been planted with decorative ornamental plants – such as a lovely silver birch tree – to keep it deliberately low key.

The third garden is accessed via a French door in the bathroom at the back of the lower ground, entrance level floor, in what would have once been the ‘area’ outside the Victorian kitchen.

Now it is a fabulous dingly dell with big pebbles, big exotic plants – and an outdoor shower.

The bathroom itself is just as cool, with a warm-toned terrazzo tile floor and two walls tiled with small white oblong tiles in a herringbone design, with terracotta coloured grout.

The bathroom sink is a perfect example of Beatrice and John-Alfredo’s skills coming together. The cupboard it sits on was made by him from dark ??? wood, with a natural burr incorporated as the handle. Beatrice sourced the appealing organically-shaped mirror over it. From one of the Paris flea markets she used to go to with her artist mother, I ask?

‘No, from Dunelm,’ says Beatrice, laughing. ‘They had it hanging the other way up, but this way, I think it looks something by a mid-century Italian designer.’

Another detail I notice here is that the bathroom door is framed in timber the same colour as the dramatic floor to ceiling stair rails next to it – and the dado rail from the lower hall and up the stairs. All the work of John-Alfredo, of course, and such a simple and effective way to break up a space, creating visual interest and drawing the eye in and up.

The same wood is used for a carpet door bar, between the geometric tiles of the lower floor and sisal in the study. Such a small detail, but exactly what makes this home a complete thing – not an arrangement of attached rooms.

The study is another perfect marriage of John-Alfredo’s work in a striking sideboard – which you can find other examples of, for sale in Ode Interiors – and a very effective cupboard door made of a wood frame with hessian behind.

The other furniture has Beatrice’s hand on it, with two striking Italian vintage chairs by the desk, which she describes as ‘small and comfortable’ and a low red 1950s chair by Osvaldo Borsain. The painting on the chimney breast is by late Hastings-based French painter Roland Jervis, who lived on Tackleway in the Old Town.

Next door, in the bedroom, the same combination of items and resources maintains the feeling of unity that runs through the apartment, with a long cabinet by John-Alfredo, which is very appealingly attached to the wall, so has no legs, greatly boosting the sense of space in a room.

The black webbing chair and footstool are by Bruno Mathison, the spindle tables and wood ball next to it by John-Alfredo – and there is another painting by Roland Jervis over the bed. The brass and glass bedside tables are Beatrice finds, from Belgium.

The wardrobe has the same kind of door as the cupboard in the study – and again is attached to the wall, not resting on the floor. On top of it is a neat row of felt hats, which have a pleasingly curated look. ‘I don’t like clutter,’ says Beatrice.

It is a very uncluttered house – but not at all stark and minimalist. Everywhere the eye falls there is something interesting to look it, but they have clearly been collected in a very considered way.

And while the house may not be packed with stuff, it is never boring, because Beatrice constantly switches things between the house and the shop.

The current location of Ode Interiors is her second shop in Hastings, before that she had a stall at London’s Spitalfields market.

‘I wanted to have a shop so I would be able to sell quality pieces for the price they deserve. When you sell in a market the dealers come and really knock you down, but I also understand that you have to measure the price for the location.’

But Beatrice’s shop is a notch higher on the antiques food chain than the more rackety junk shops Hastings Old Town is famous for, where you have to hunt hard for treasure among the crud. Everything in Ode has been carefully selected and is beautifully displayed too.

‘I am in the middle of the market,’ says Beatrice. ‘I sell pieces by known names, vintage and current – including John-Alfredo.’

She is now also turning those sourcing skills into specific interior design projects, furnishing and decorating spaces for clients.

The upper hall shows the breadth of her resources. A wonderful picture on the wall is the Queen’s head, as on a stamp, rendered in coloured buttons by well-known Margate-based artist Ann Carrington – who is a friend.

The painting hangs on the wall next to the French windows out to the garden, which have the oblong panes of the currently highly-fashionable black metal Crittall-style windows – but in white. I comment on how refreshing this is, assuming they must have been specially commissioned.

Turning back on ourselves we had back into the centre of the house, past an op art painting towards another of John-Alfredo’s wall-hung cabinets, with deeply textural doors, made by following the grain of the wood. Like all his work, your hand immediately wants to touch it.

Next to the cabinet is a group of African pieces, including masks and a fantastic Moroccan horned helmet, that lead you into the knocked-through first floor living space, with the sitting room and garden view window to the right and the kitchen/dining room, street view window to the left.

Again the combination of John-Alfredo’s making and Beatrice’s finding creates a satisfying rhythm in both spaces. The sitting room is furnished with an intriguing segmented sectional Italian sofa upholstered in lipstick red and a sleek one in wood and ecru linen, made by John-Alfredo.

In the spaces on either side of the chimney breast are stand-alone metal shelves by German company Vitsoe. The 606 universal shelving system was designed by Dieter Rams in 1960 and has been made ever since. (Beatrice recommends having a look at their website to find out more vitsoe.com).

What strikes me is that in a very pleasing chime, they are hung on the walls, just as so many of John-Alfredo’s pieces are, so they sit inside the spaces on either side of the chimney, rather than filling them, giving them a sense of lightness.

In between them there a small square niche, painted black – with the same repeated on the chimney breast in the kitchen, linking the two areas.

In a very clever bit of Beatrice’s sourcing, the run of black kitchen cabinets – by a German kitchen company – was found on eBay, an ex-display set up. She ordered the stainless worktop, with its pleasing integral sink, from a specialist company that makes them for professional kitchens. The result of another of her so fruitful online searches.

The chimney niche on the left is filled by a John-Alfredo cabinet, with another of his very appealing burr handles, and on the other side the space is filled with an unapologetically functional large steel refrigerator, with no fussy attempt to conceal what it is.

When everything else in the space is so interesting and elegant, with a table by John-Alfredo, Model 75 teak dining chairs by Niels Moller for JL Mollers Mobelfabrik, a mid-century pendant light and a bold artwork of Little Richard by Turner Prize-winning artist Mark Leckey, the fridge holds up just fine.

That’s how confidence in decorating works. 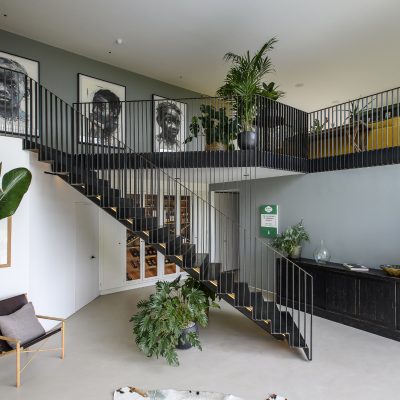 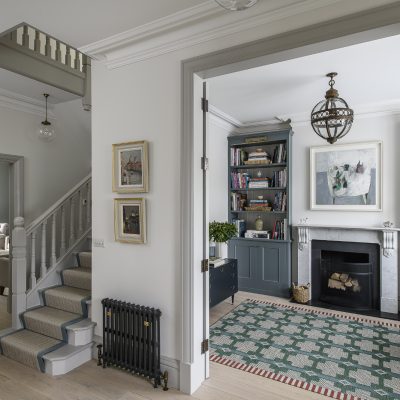 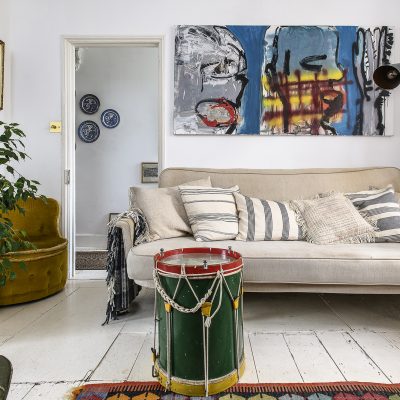 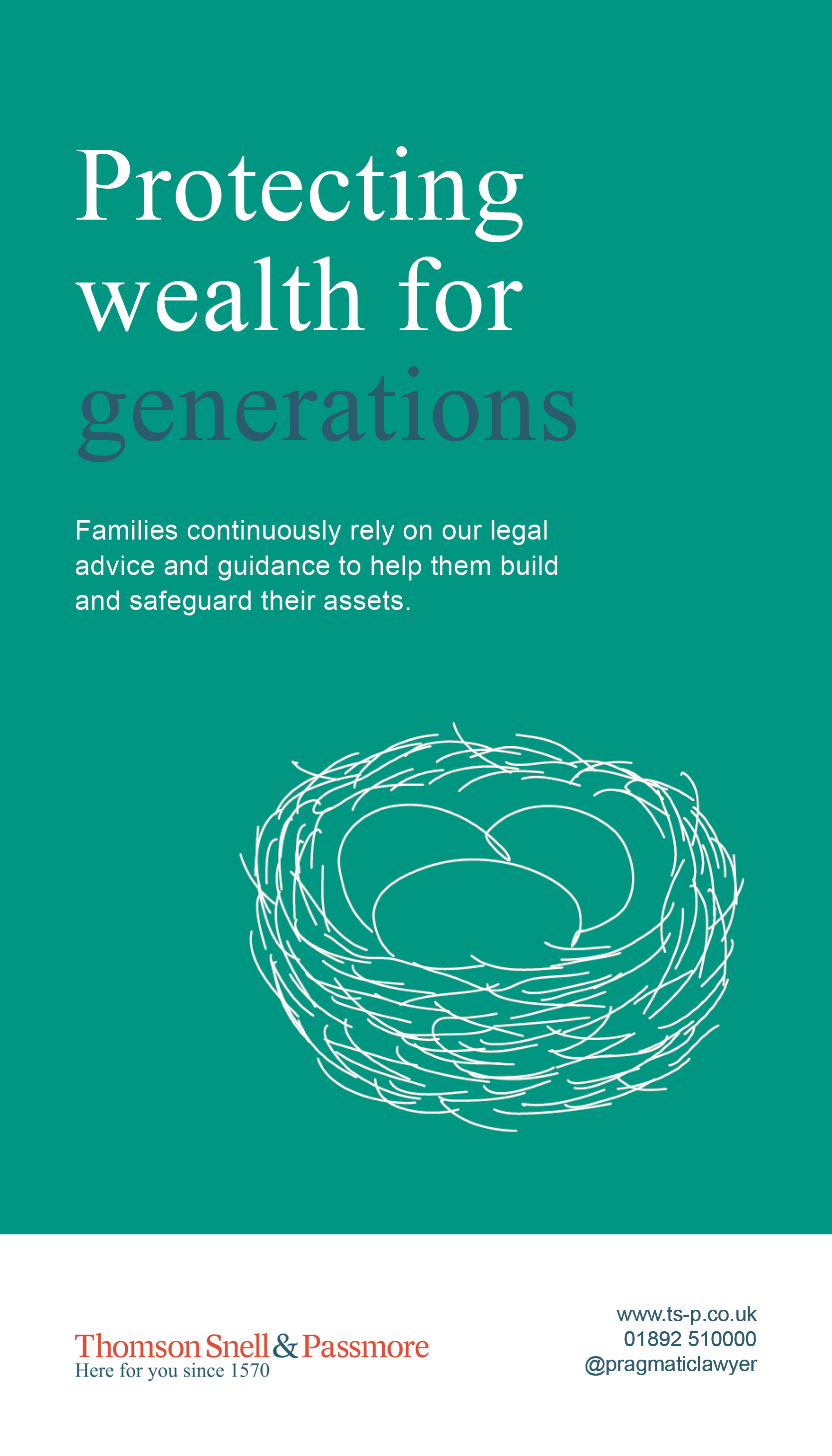 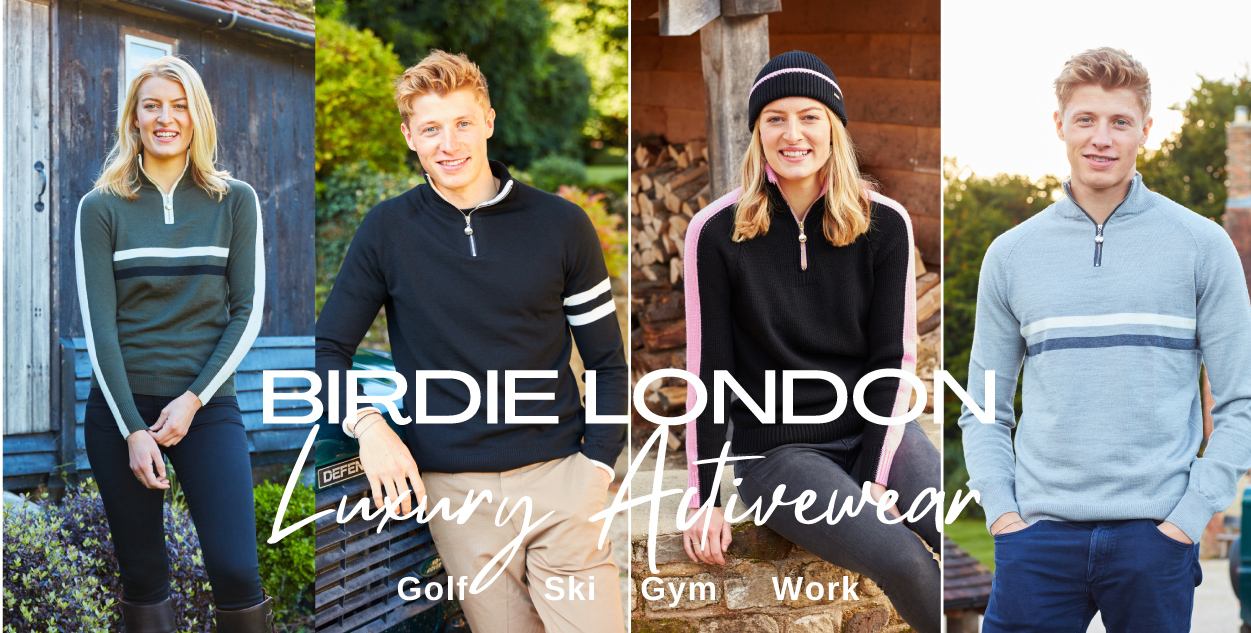 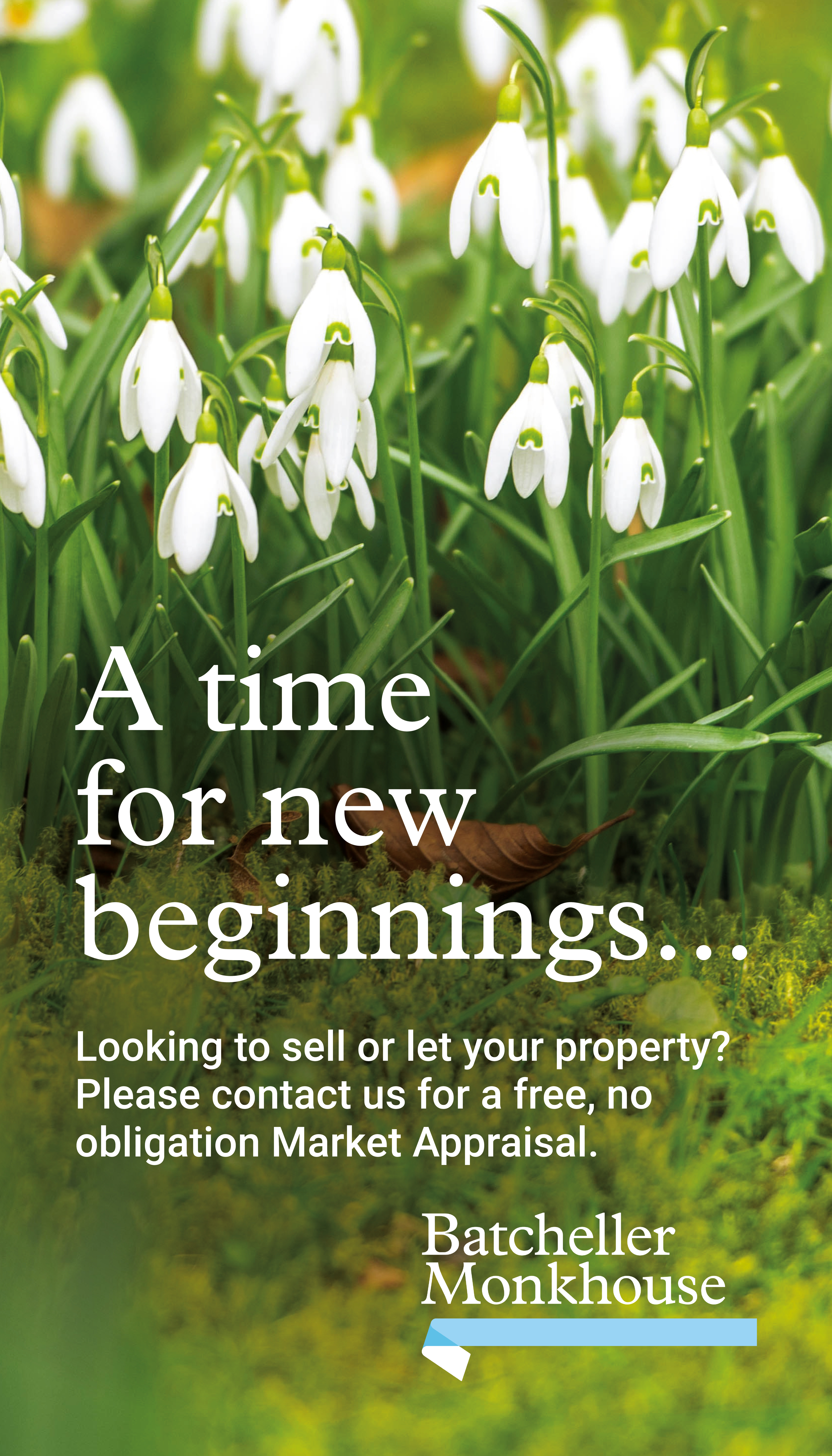