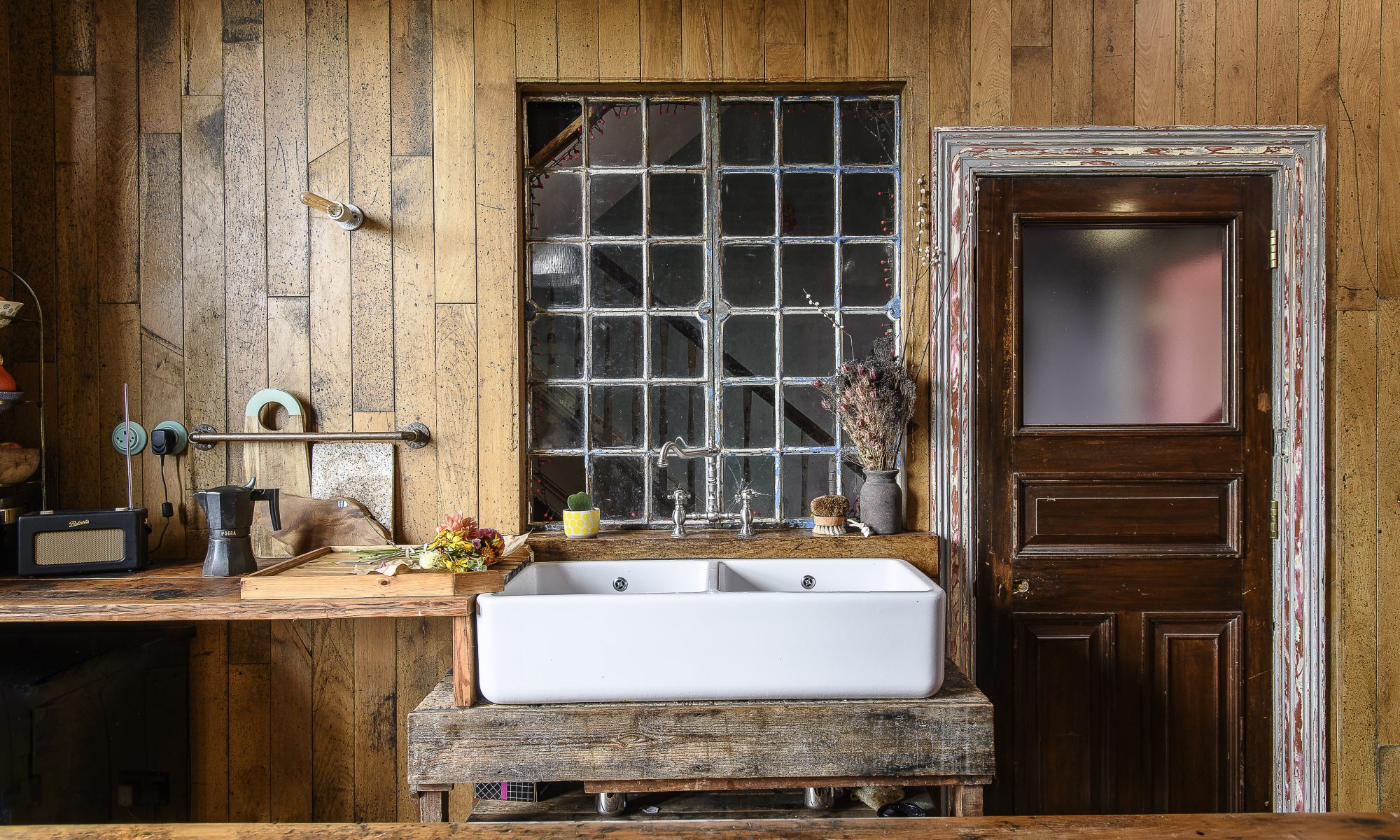 The first time I noticed the name painted over the windows of a new shop in St Leonards’ London Road, (right by my favourite café, Sugar Pie Honey Bun), I had to stop and look.

‘Gyre & Gimble’ made me smile – a reference to Lewis Carroll’s poem Jabberwocky, written in what in literary terms is called ‘nonsense’ language, but which the generations of children who have come across it within the pages of Alice Through the Looking Glass, find perfectly easy to understand.

‘Twas brillig and the slithy tothes, did gyre and gimble in the wabe…’ as the first two lines go, has always made total sense to me – while evoking a uniquely mysterious atmosphere, that only an imagination as vast as Lewis Carroll’s could invent.

How very special then, that if Mr Carroll were to come back and visit St Leonards – as he did often in his lifetime to see his aunts who lived in Wellington Square – he would find inside this building a domestic kingdom as otherworldly as the domains he dreamed up.

It’s the combined creation of artist Izaskun Gonzales and her husband Toby Coe, a painter who also does welding and carpentry (working on exhibitions at the Natural History Museum).

This marriage of unbridled imagination and practical skills, brought to work on a Victorian building that had been empty for 20 years before they bought it, has created a family home like no other I have ever visited.

Even my arrival to talk to Iza (as everyone calls her) about the house is special. Entering via the shop door I’m greeted by 9-year-old daughter Uma and with a chorus of musical howls from white malamute, Kipo, who continues to comment enthusiastically on our conversation, as I sit down at a small desk, with a horse’s skull beneath it.

There is so much to take in within the shop – a magnificent headboard from Venice, propped against an Indian cabinet, African beaded figurines, dried grasses and fascinating objects by the many makers living nearby in this town that has become such a nexus for creative people.

In the end, leaving Uma with chatty Kipo, we head upstairs to the combined sitting/dining room and kitchen area – where there is more space, but still distractingly fascinating things wherever you look.

I deliberately choose a seat at the dining table facing towards the window, so I won’t be distracted by curiosities, as I talk to Iza – only to find the window itself is a thing of fascination, dressed with a collage of old lace curtains, some of them discoloured and quite ragged. It’s beautiful. Iza smiles. “I love reusing things,” she says, then points at the fabric tablemat in front of her, with a plant sitting on it. “I made this from the cloths you use to clean brasses. I like to give them a second life.”

It’s all gripping, but first things first, I have to make sure I have the correct spelling of Iza’s unusual first name. “It’s Basque,” she tells me. “I’m from Saint Sebastián, on Spain’s Atlantic coast.”

And with this information, the extraordinary space I’m sitting in – painted the most wonderful shade of raspberries-and-cream pink, with a wonderfully free-hand diamond pattern at picture rail level and a series of very unusual art works made from padded and collaged textiles – starts to make sense.

The Basque country, which straddles an area of north west Spain and south west France, is a specific ethnic zone with its own cultural history – now recognised by the Spanish government. It also has its own ancient language, one of a rare group of ‘language isolates’ in the world – which means they are related to no other languages. To give an idea of the rarity of such a mother tongue, Basque is the only one in Europe and there are only six of them in the whole African continent. And, as it is accepted that languages define cultures, it’s not surprising to find that Basque people think differently from the rest of us.

Mind you, Iza has lived in the UK for 30 years. “I came to do a BA in Graphics at Middlesex University, but I ended up doing everything but graphics – photography, painting, textiles…” Which is gloriously apparent in the textile works and free-style painting on every wall of the room we are sitting in.

The family’s move to St Leonards is about the only conventional thing about them – moving down from London when Uma was born to find a larger property within their budget. “First we did another project on the outskirts of the Old Town,” says Iza. “We had seen this building, but we thought it was too much to take on. It had been empty for 20 years, so it was a big project, but then the price dropped…

“We wanted to do something with a business incorporated and it had the shop on the ground floor, which I knew would work well for home-schooling Uma, as I could be there with her, while running the shop.”

Adding to the complexity of the project, they weren’t the first people to take on the 1855 building after its long stretch empty. “Before us a developer had bought it and was going to make it into three flats. They had stripped everything out – and literally thrown it all through the back window…” Which meant it fell into the amazing 1920s two-storey orangery extension on the back of the building – wrecking it.

Iza shows me out of the window of the kitchen at the far end of the sitting room, where the outer walls of the curved back orangery still stand, the roof and first-storey floor gone.  It’s like a ghost building – eery and astonishing and entirely at one with the atmosphere of the house. Quite magical.

Adding to Iza’s frustration about the builders’ thoughtless destruction was what they did with the contents of the shop. “It had been a haberdashery and all the old stock was still there. They threw it all away…” For an artist in textiles, Iza’s main medium, this must be uniquely frustrating, but the fabric connection is still lovely – and she’s also fascinated by the first owner of the shop.

“The original owner was a Victorian lady called Flora Verral, a photographer.   She had a business with her sister who was also a photographer, which was unusual for women then. “In those days St Leonards was a very smart seaside resort and there were a lot of costume parties – the sisters would take photographs of people in their outfits. We have some of the photos. I am still researching to find out more about her.” I sense future art projects humming in the back of Iza’s brain.

Still looking out of the back of the house, I comment how nice the three-section kitchen window is. “We maintained as much as we could of the original fittings, but we have put in every window in the house – the only one that is original is the shopfront. They were all hopelessly rotten. We had them all made to size in Poland.”

They also added an additional internal window from the kitchen carrying light out to the landing, which otherwise would have been quite dark.

Walking back through the sitting room – past the wonderful sectional Louis Fooey sofa, which is American in origin – I ask about the pink walls. “Originally we had varnished grey plaster walls throughout the house but during lockdown we decided to brighten it up. When we moved in the whole house was pink and green, so we have kept to combinations of that.” On the stairs and landings this combination features in sponged paint with a deliberately rough texture, which is so interesting to look at – and one of the many details in this house which made me question my predictable standards, in this case that paintwork should be ‘perfect’.

Up on the second floor there are three bedrooms, including the master and Uma’s den, complete with companion rat, hamster and lizard and a raised platform bed built by Toby. Then we go up again, to another large landing – almost like a room in itself – and the second bathroom. Which just might be my favourite bathroom ever.

Needless to say the décor wasn’t suggested the normal way, from looking at pictures in magazines and catalogues… “It was inspired by the film The Shape of Water,” says Iza, referencing the romantic sci-fi fantasy film about a woman who falls in love with a captured humanoid sea creature… I wouldn’t be surprised to find one living here.

It has a huge walk-in shower, behind two Crittall-style glass panels, with mixed geometric floor tiles and porthole windows. The other walls are panelled with waxed scaffolding boards and the reclaimed sink sits on top of an old desk.

There are so many interesting details to take in, it’s hard to leave it, but I’m glad I did, because next door is my favourite spot in the whole house – the spare room that Iza has painted with astonishing murals of phantasmagorical – and rather adorably cute – creatures. “It was a lock down project,” she says, smiling – and when I express surprise that some of the wonderful paintings are currently obscured by large, collaged fabric hangings, she shrugs: “I needed somewhere to work on them.”

Adding to the atmosphere in this special room, the old wooden double bed is positioned in the middle of it, not in the usual spot against a back wall – so you can look straight out into the canopy of the mature trees outside.

From here we head next door to another bedroom and then up a wooden step ladder to an attic room, with Velux windows onto magnificent sea views.

I think that made seven bedrooms, but it was hard to keep count, as the house just seems to keep rambling on. It wouldn’t surprise me if additional rooms sometimes appeared on their own, over night.

Back down all those stairs, in the basement, is a room I wouldn’t want to be in during the small hours: the original Victorian kitchen, which Iza has kept practically untouched.

With bare brick walls and dim lighting – with amazing original light switches – and the old range still in position, looking out into the ground floor of the ruined orangery and with bits of old Victorian clothing strewn around by Iza, it’s like a brilliantly spooky film set.

Where anyone else would have put a utility room, storage and useful broom cupboards, it’s an art installation – nothing more, nothing less.

Lewis Carroll would have loved it.

You can find out about Gyre & Gimble on Instagram @gyreandgimbleinteriors

Iza and Toby also rent out rooms on airbnb. 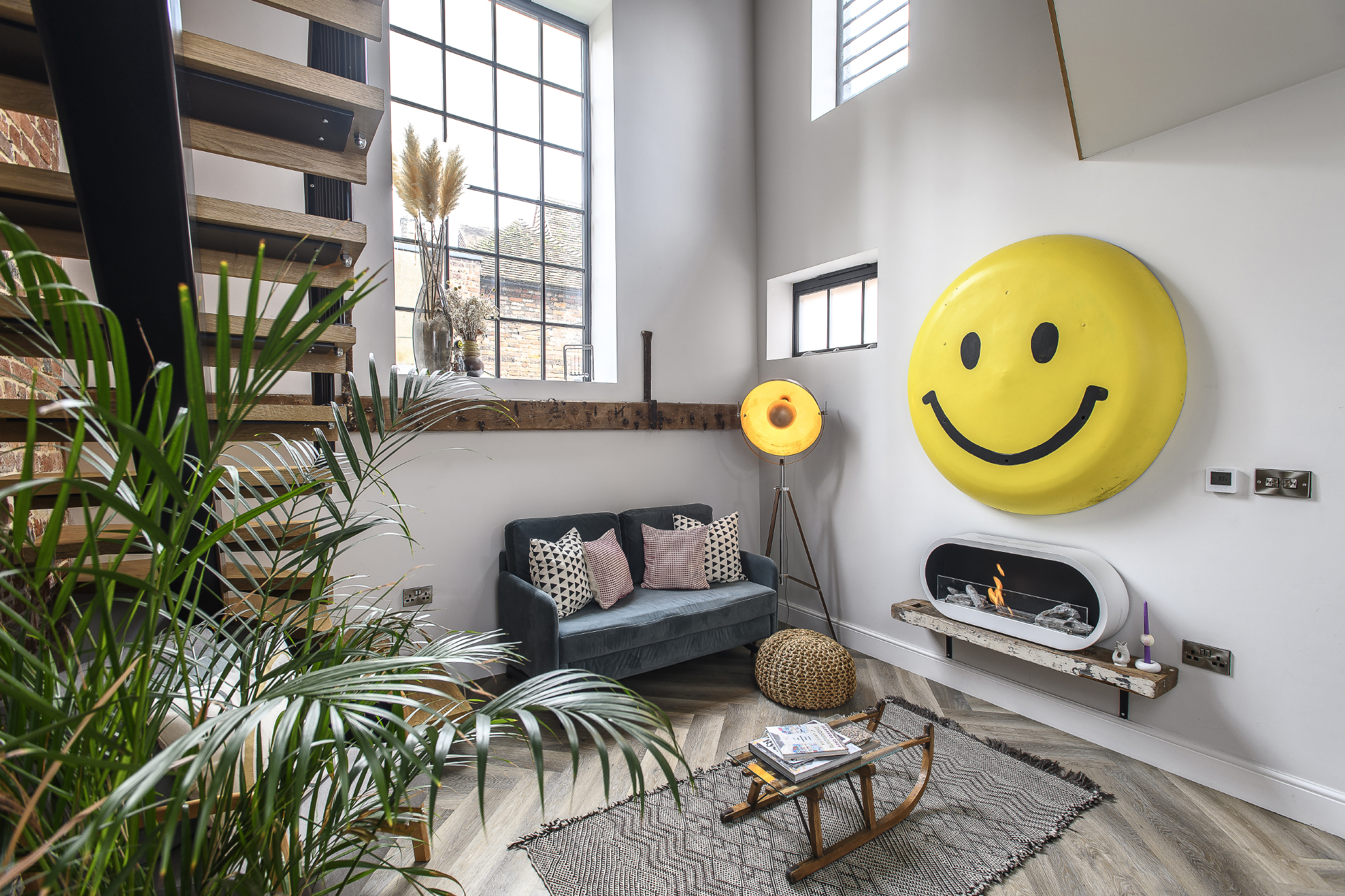 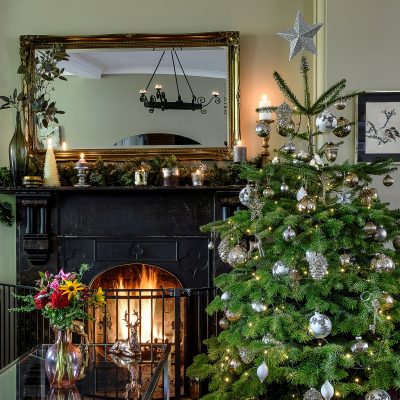 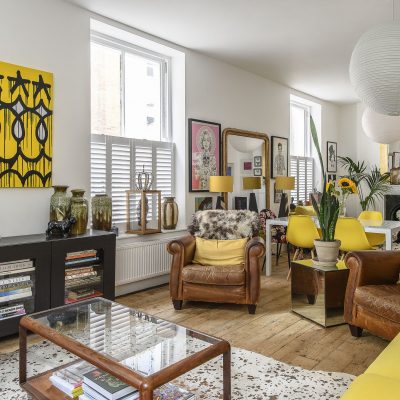