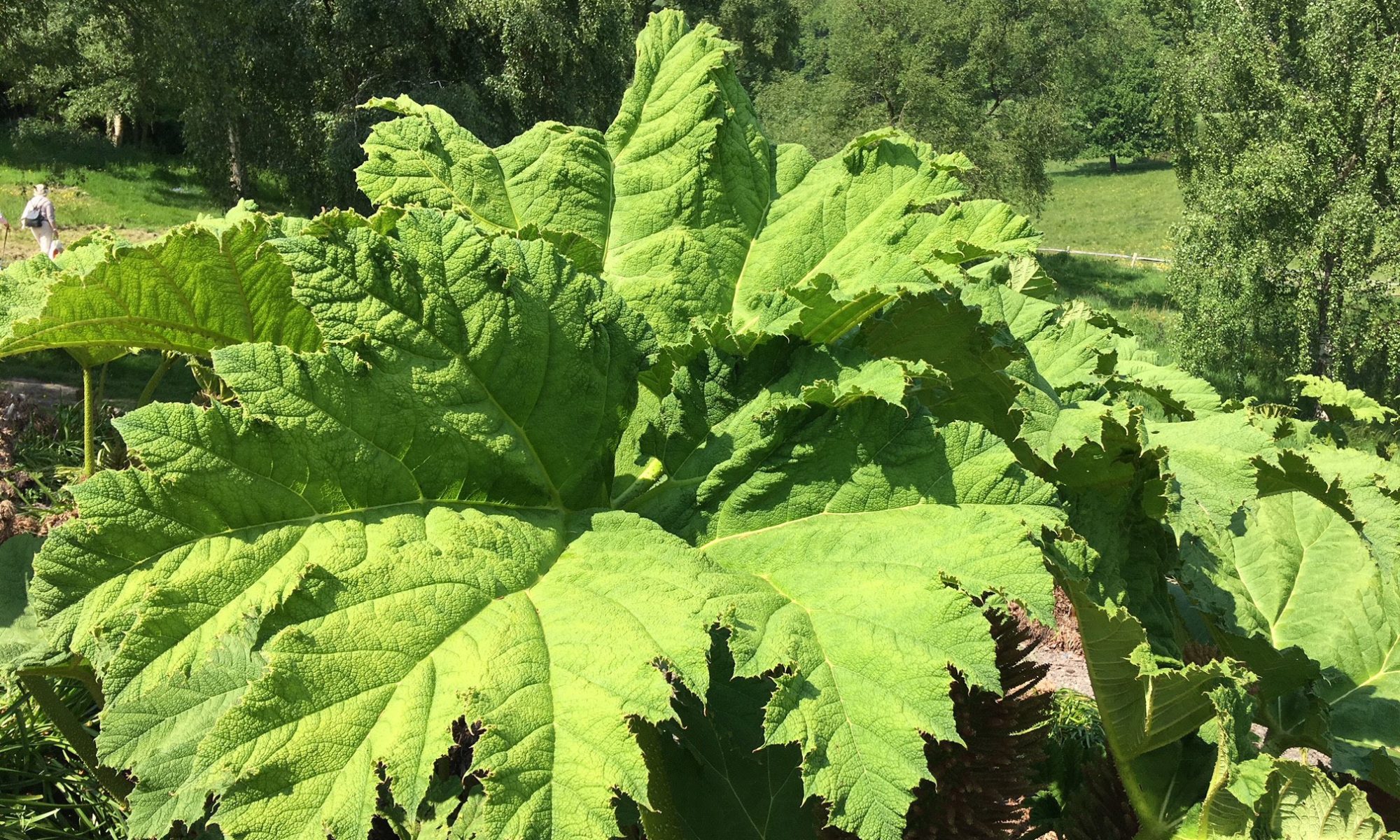 It was serendipitous that we discovered that Blenheim was to be closed for two days recently, as we had to put our visit off and decide on a ‘day out’ somewhere else. And so we went to Chartwell near Edenbridge, so much nearer and such a fascinating place to visit.

The house, being Sir Winston Churchill and Lady Churchill’s former home, was very interesting, but the bonus was that as we wandered through the rose garden, we came upon a volunteer guide waiting to take a garden tour and we had her to ourselves.

The views from the terrace across the lake to the woods are even more fabulous when you realise that virtually all the mature trees you can see have grown up since the 1987 storm when the area lost thousands of trees.

From our vantage point they looked as if they had been there for centuries. Then there is the Weald of Kent stretched out before you with hardly a building to be seen. No wonder Sir Winston loved the place so much.

To get to the house you walk up past the rock garden and several ponds, one of which is stocked with golden orfe and was a favourite spot for Sir Winston, particularly in his later years.

In 1948 Lady Churchill had visited the Chelsea Flower Show and had been taken by a rock display designed by Gavin Jones. Subsequently he and the Churchills became friends and his Chelsea garden was installed at Chartwell without charge.

There are dramatic plantings of Gunnera manicata in this part of the garden, which the guide described as a ‘marmite’ plant. You either love it or you really don’t. It is certainly a giant with its sturdy, prickly stems and absolutely huge leaves, their undersides covered with lethal looking prickles.

Native to Brazil, this plant is the largest hardy herbaceous plant grown in Britain. Grow it by water or any boggy part of your garden but not so deep that their crowns are kept too wet.

So, after seeing the gunnera in all its glory, we were on the lookout for other large-leaved plants. We were in luck with a planting on the far side of the golden orfe pond of the Yellow Skunk Cabbage or Lysichiton americanus with its spectacular paddle-shaped leaves and bright yellow arum spathe flowers. We’d missed the flowers by a month. And then there were huge plantings of Osmunda regalis, the Royal Fern, completely happy in their damp conditions and a particularly lively green at this time of year.

In Lady Churchill’s rose garden another large-leaved plant caught our eye. Hydrangea aspera subsp. sargentiana. This is one for a shadier site as the enormous, velvety leaves scorch under a hot sun. This plant can have a dramatic growth spurt of up to ten feet if it is happy with you. The flat florets are an electric bluish white.

Another species of hydrangea that is worth mentioning for its rather beautiful and large foliage is Hydrangea quercifolia, the oak-leaved hydrangea. We have one here but I’m not sure that it is in the right spot as it is happiest kept moist and this one here is rather too close to an old ash tree which sends its progeny all over the garden and results in a pretty dry flower bed.

If you reduce the height of this hydrangea by a third in early spring, the fresh leaves will be much bigger. This has wonderful autumn colour, the leaves turning a ‘garnet red’.

And then there are the rodgersias. Grow them for their spectacular foliage and for their flowers. We have Rodgersia pinnata ‘Maurice Mason’ which was originally given to Christopher Lloyd by Maurice Mason, a Norfolk farmer and horticulturalist, and which was thought so choice that it was given a name.

It’s more vigorous than some, although ours is taking a while to come back up. There have been some anxious moments when we thought that the plant hadn’t made it through such a harsh winter, but three bronzy stems have now appeared and a leaf is unfurling and is making its way upwards. This cultivar has deeply serrated palmate leaves and lovely rich pink panicles of flower which darken as the season goes on.

I also like the look of Rodgersia ‘Braunlaub’. Its huge pinnate leaves darken to a rich chocolate brown combining with panicles of creamy flowers and followed by strong autumnal colours. How delicious that all sounds.

Grow rodgersias in shady, north‑facing borders where they work well with hostas such as Hosta sieboldiana. Try H. sieboldiana ‘Big Daddy’ which, as its name implies, is a cultivar with large, very large, textured bluish leaves.

Someone recently told me that they always found it difficult finding plants which will thrive in dry shade, which seems to be everybody’s problem planting area. One particular plant comes to mind which is perfect for these conditions. Trachystemon orientalis comes from Eastern Europe originally and its English name is ‘Abraham-Isaac-Jacob’.

It is a member of the Boraginaceae family and its borage-blue, rather enchanting flowers appear before the leaves get into their stride. You can see sheets of it at Nymans. We have it under three old holly trees. We’ve lifted their canopies and the trachystemon has completely covered the area underneath with its huge leaves. They are perhaps a bit coarse, in fact not at all elegant, but they not only serve a purpose but provide dramatic ground cover – oh, and if you get bored with them, they’re edible… 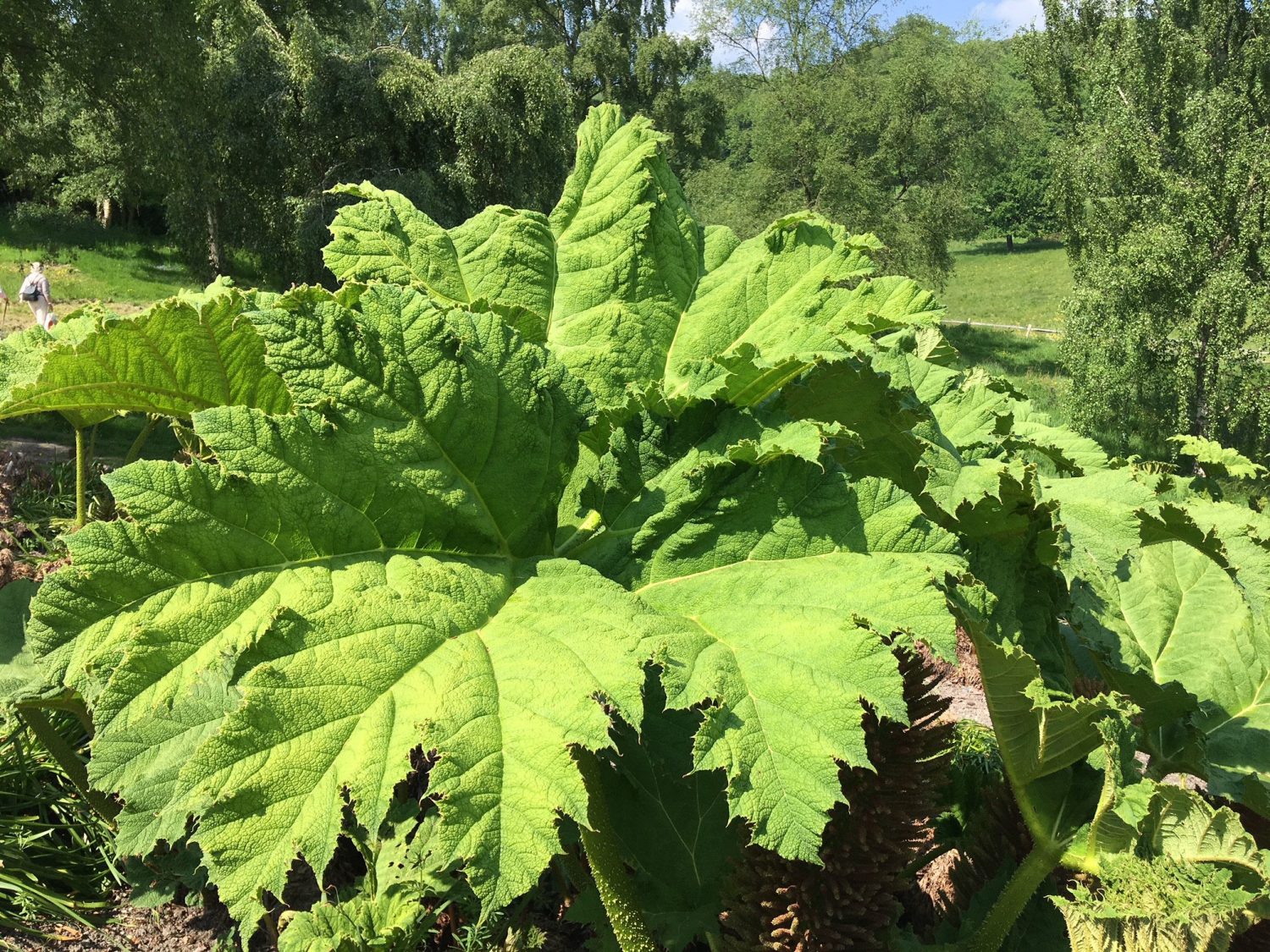 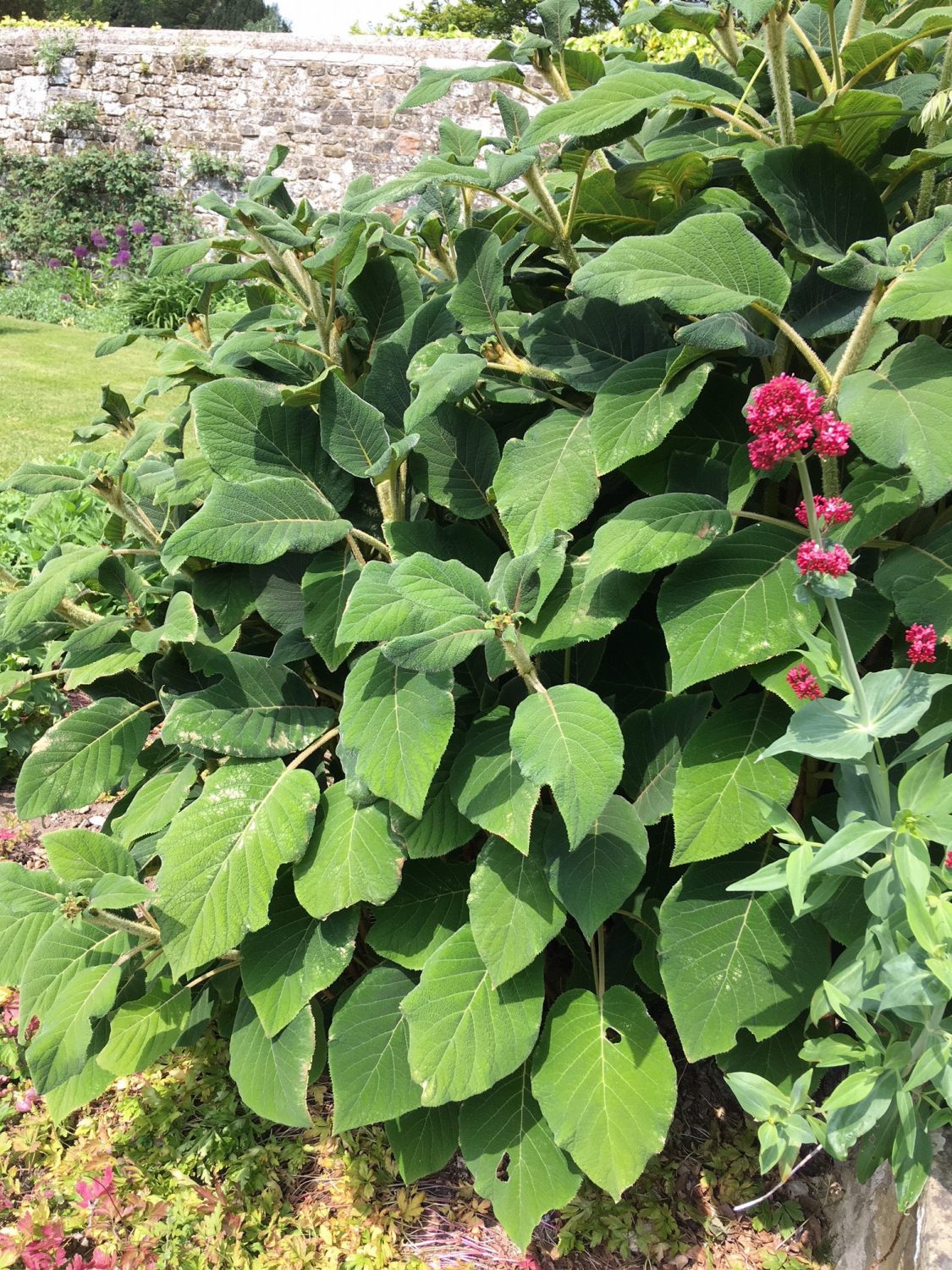 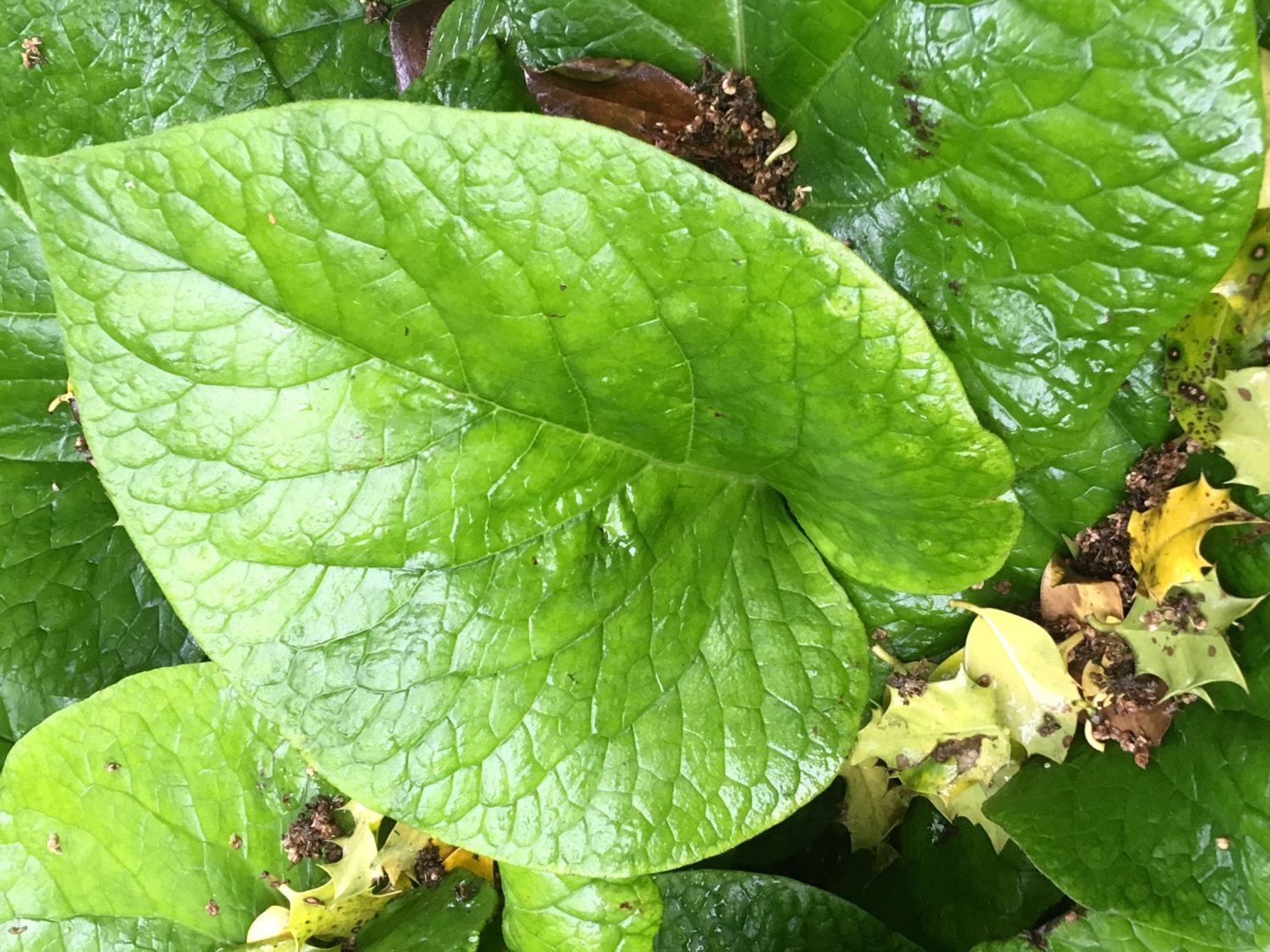 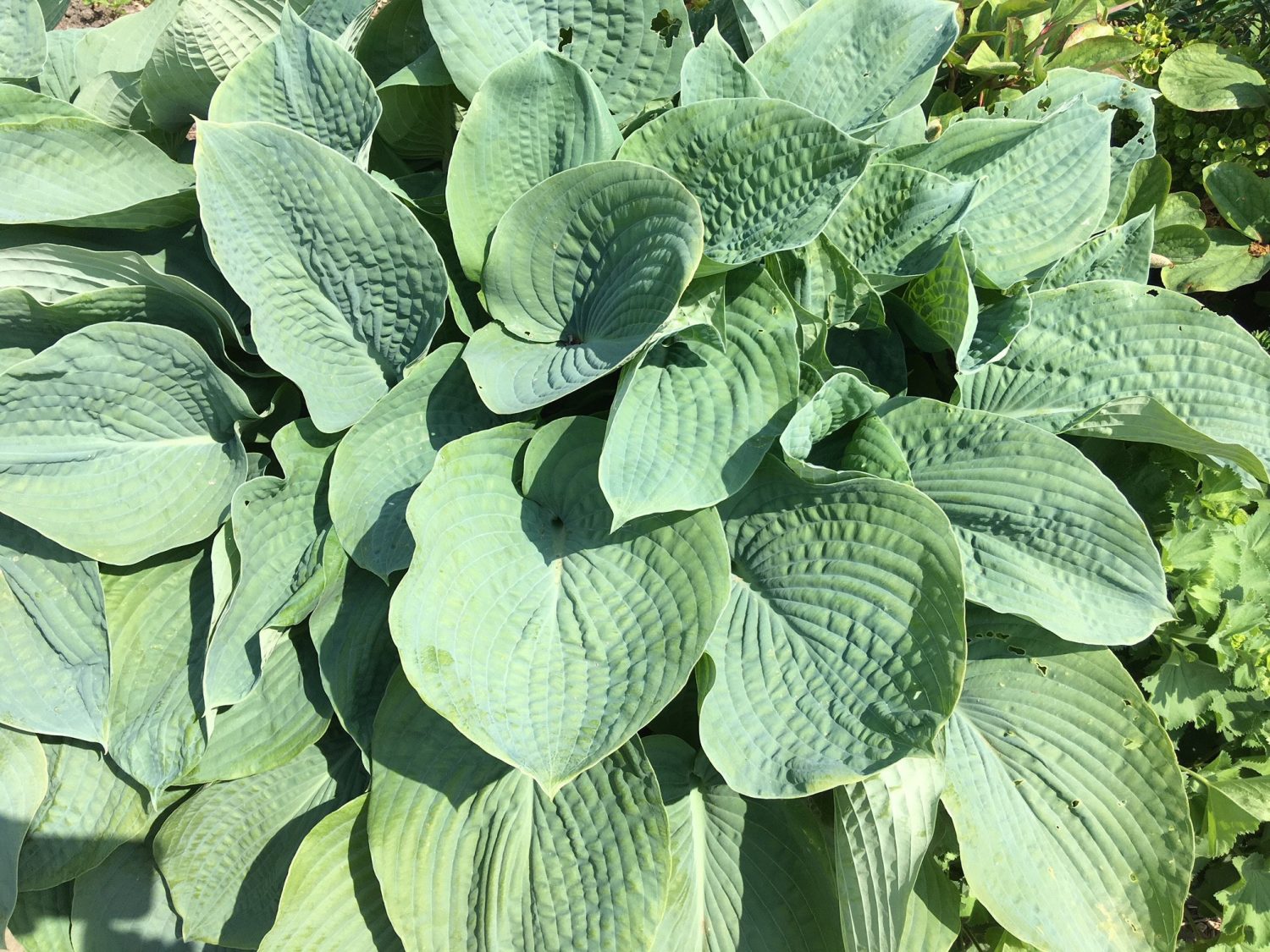 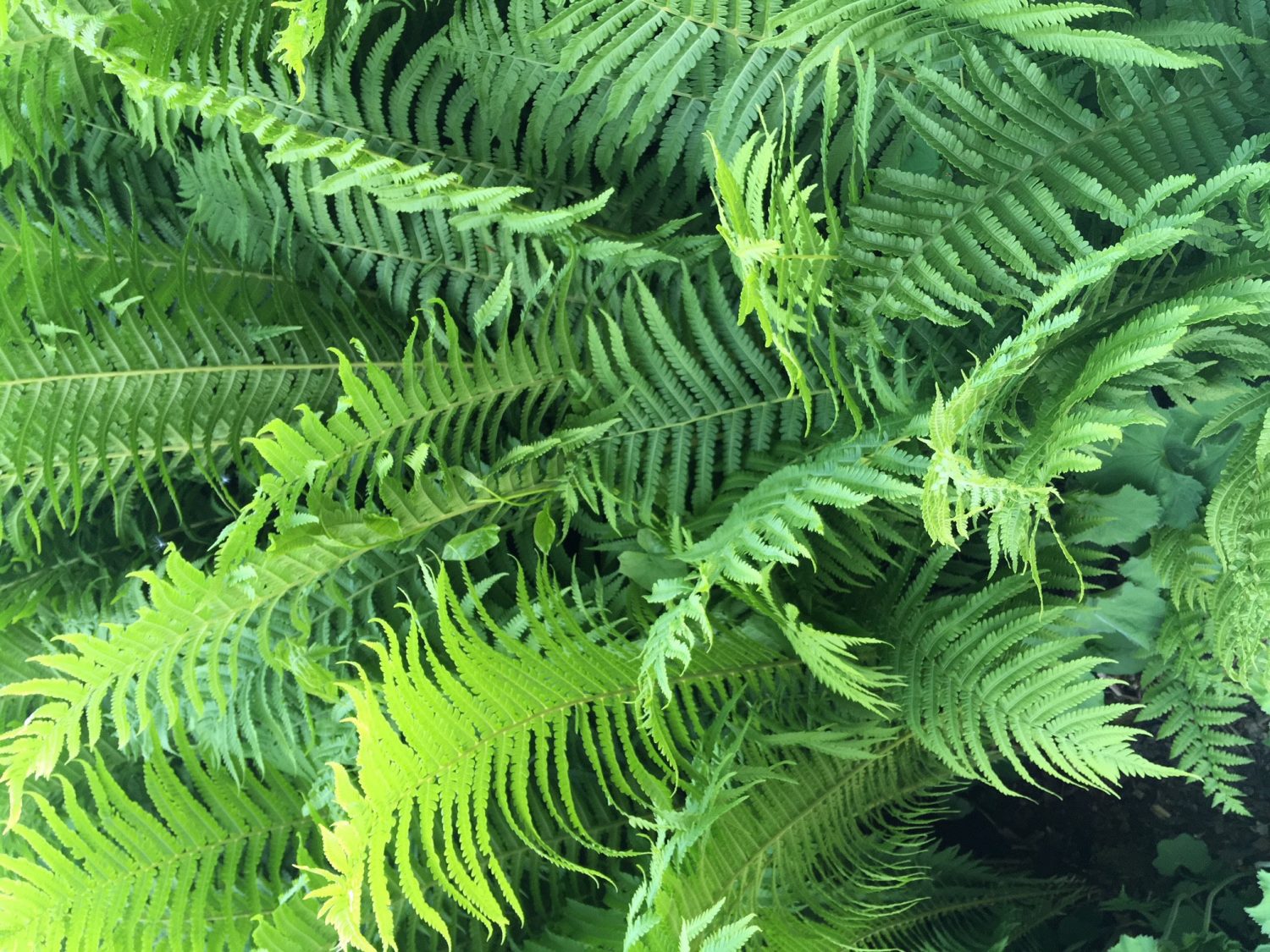