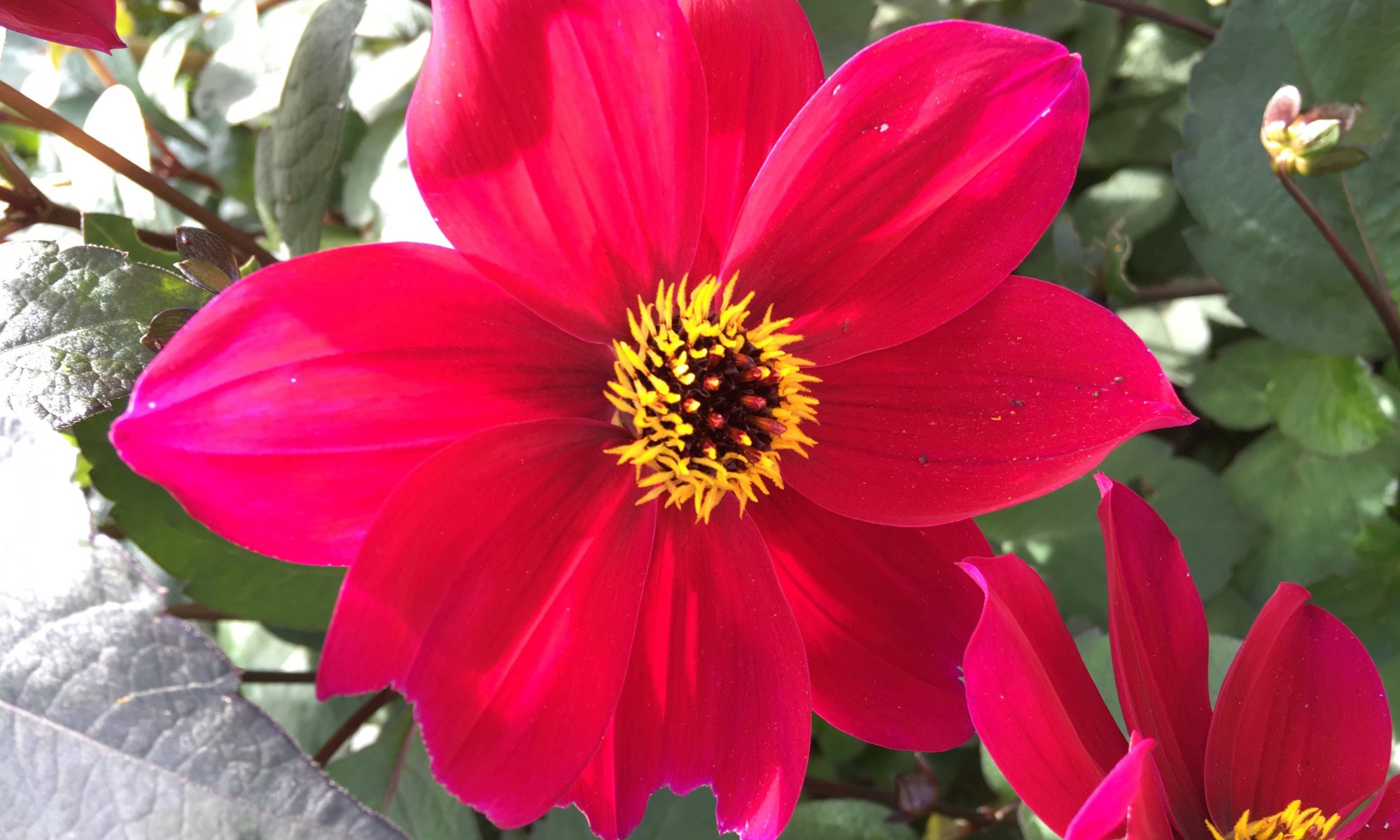 Sue Whigham celebrates and investigates the most joyous of late bloomers.

Whether the name ‘dahlia’ was bestowed by the great Carl Linnaeus himself – the Swedish botanist, physician, and zoologist who formalised ‘binomial nomenclature’, the modern system of naming organisms – after one of his students, Swedish botanist, Anders Dahl, is in question as the great man died in 1778, eleven years before the plant was introduced into Europe.

It seems most likely that the first attempt to define the genus was made by Abbe Cavanilles, Director of the Royal Gardens of Madrid, who received the first specimens from Mexico in the early 1790’s. However, what is certainly known is that the species originates in Central and South America and in particular, Mexico, where dahlias are the National Flower.

Their natural habit is rather unlike the conditions we give them in that they come from cool, damp mountain slopes. Imagine seeing the lavender flowered species, Dahlia imperialis, growing to its full height of up to ten metres on the hillsides of Guatemala…

The chance of that particular plant flowering in this country is limited so we have to content ourselves with growing that one for its dramatic height and foliage, but with 42 species of dahlias and innumerable hybrids – up to 50,000 and still counting-we have a wonderful array of choice of this jolliest of flower.

What other bloom is so varied and so much fun as a late season border plant? I was reading the Frustrated Gardener blog this morning which is worth subscribing to and the author Dan Cooper (whose Broadstairs garden is small, hence the title of his blog) and I particularly like his description of a ‘drama of dahlias’ for that is what they bring to a garden with their fantastically rich colours and forms.

We’ve got two of the species varieties growing in a large pot here, one of which is D. coccinea var. palmeri, and I can’t tell you how often we’re drawn to go out and admire the intensity of its burnt orange petals in the early evening sun combined with delicately filigree leaves. I like the single flowered varieties such as this particularly as they are, of course, bee friendly. And whilst the ball varieties, also firm favourites, with their intense spiral arrangement of incurved petals are lovely, any pollinating insect would be pushed to make any headway with them.

I wanted to know a little more about the secrets of success with growing dahlias with an eye to improving on this year’s limited success. Mind you, it hasn’t been the ideal year. Even Monty Don admitted that his dahlias haven’t been as usual and he put it down to lack of water in June. All the more reason to look ahead to next season, so I popped into see Dave Izzard whose front garden in Wittersham is always a picture in dahlia season and causes many a dahlia loving driver to lose concentration for a moment or two!

He was so accommodating and not only showed me his plants but talked me through what he does to produce such fantastic blooms and how he got started. It seems that thirty years ago he joined the Parish Council and was given the job of looking after the planting around the War Memorial. Luckily for him somebody in the village offered him dahlia plants which did well and that was it. He was hooked!

He tends to get his tubers from Halls of Heddon who have a very comprehensive list. They offer 10 to 13 centimetres pots containing a tuber grown for a full season before it is sold. This ensures that it is healthy and compact. They are available from December through to February and arrive in little polystyrene sleeves in vermiculite for you to start off.

Dave cuts back his dahlias when the frost gets to them or when they “start looking embarrassing”. I know it is a good idea to lift the tubers once the foliage has been blackened by frost and hopefully before the stems are badly frosted.

He has a small but compact greenhouse and puts his tubers in large pots of his own gritty mix (which would have had daffodils growing in it earlier in the year), after cutting the stems down to about ten centimetres and drying the tubers out upside down. This is because the stems of dahlias are hollow and you don’t want to leave moisture in them for the winter because it’s likely that they would rot if you did.

In February he will start watering them and once they begin to sprout he will take any cuttings he wants for his garden. When he plants out he uses a mycorrhizal fungus product around their roots to get them off to a good start and will stake them at this stage, tying them in as they grow on.

This is a good tip as it is so easy to pop them in and then think that you’ll do it later. They move fast and sometimes a bit too swiftly and it is so much easier to start with the stakes in place whilst they are relatively small. Dahlias are hungry plants and incorporating well rotted manure will ensure that they flourish.

Once they get going, Dave is generous with his feeding and will do this weekly. He uses a rotation of products to encourage both plant growth and flowering. It certainly works. It seems that if you are showing dahlias the thing to remember is that a dahlia bud the size of a pea takes thirty days to mature and for those that know, once you have selected the best looking bud or young flower you then take off any side shoots so that the plant’s energy is concentrated on that particular bloom.

The Salutation Garden down in Sandwich has an annual Dahlia Festival in September and this year they have had 284 cultivars growing in the garden. These are currently being photographed and put on their website. Log on to this as you can order tubers for next year having had a good look at the myriad varieties they grow.

Steve Edney, The Salutation’s head gardener is mad about dahlias and is on the RHS Dahlia Committee. They hold the National Collection of Dark Leaved Dahlias in Sandwich and have their own dahlia breeding programme there.

Talking of which I saw a beautiful dahlia/aster combination up in the High Garden at Great Dixter last week. The dahlia was D. ‘Twyning’s After Eight’ AGM, with its elegant single white flowers and the darkest of foliage. This was developed by Mark Twyning in 2004 down at the National Dahlia Collection now at Varfell Farm, near Penzance in Cornwall.

The Collection was originally based on a private collection made over many years by David Brown who, when the dahlia was out of fashion in the eighties and nineties, ‘kept the faith’ and conserved hundreds of varieties.

They were hugely fashionable in the fifties and sixties and Dan Pearson describes so evocatively taking his little ‘garden in a seed tray’ to local flower shows as a child where the dahlias were the domain of men in string vests growing the biggest and best of everything on their allotments including dahlias rather than growing them as border plants. And how, despite their ‘glamour’, dahlias were as much vegetable as flowers.

Interesting that, as the Aztecs used the hollow stems of Dahlia imperialis as a source of water; some South American peoples use the leaves medicinally and the tubers too were harvested as a food product. 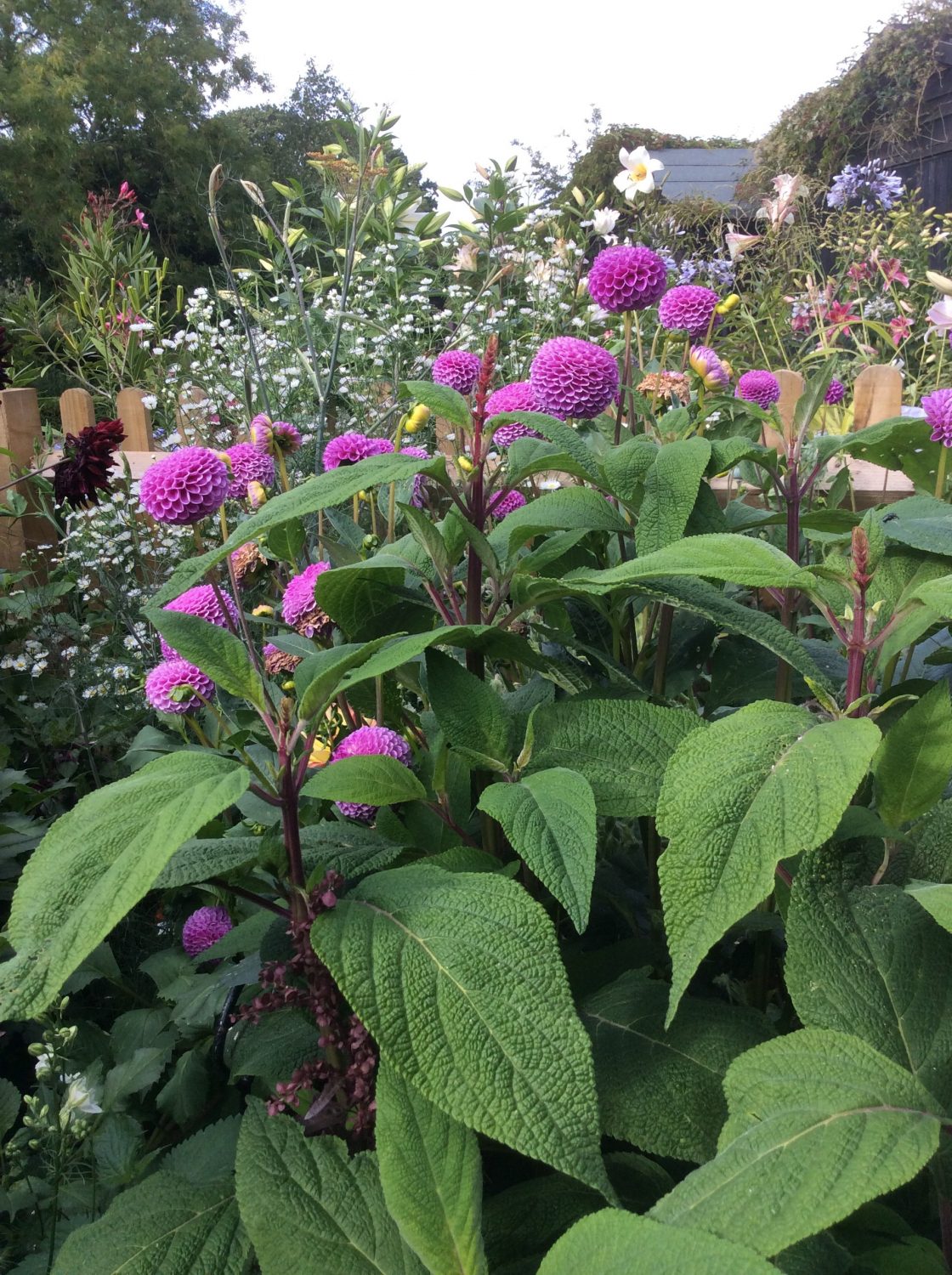 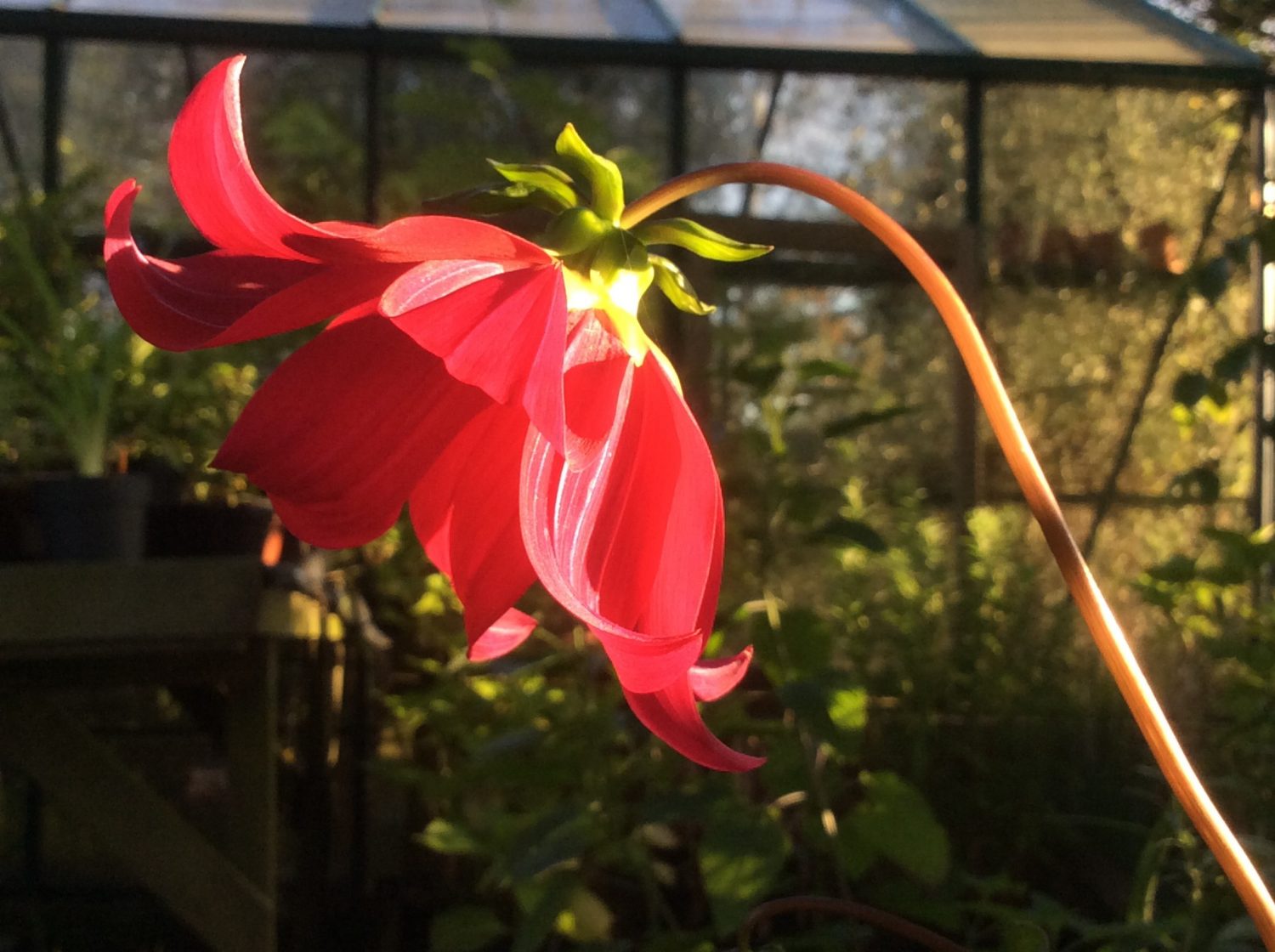 There are 50,000 different dahlia hybrids 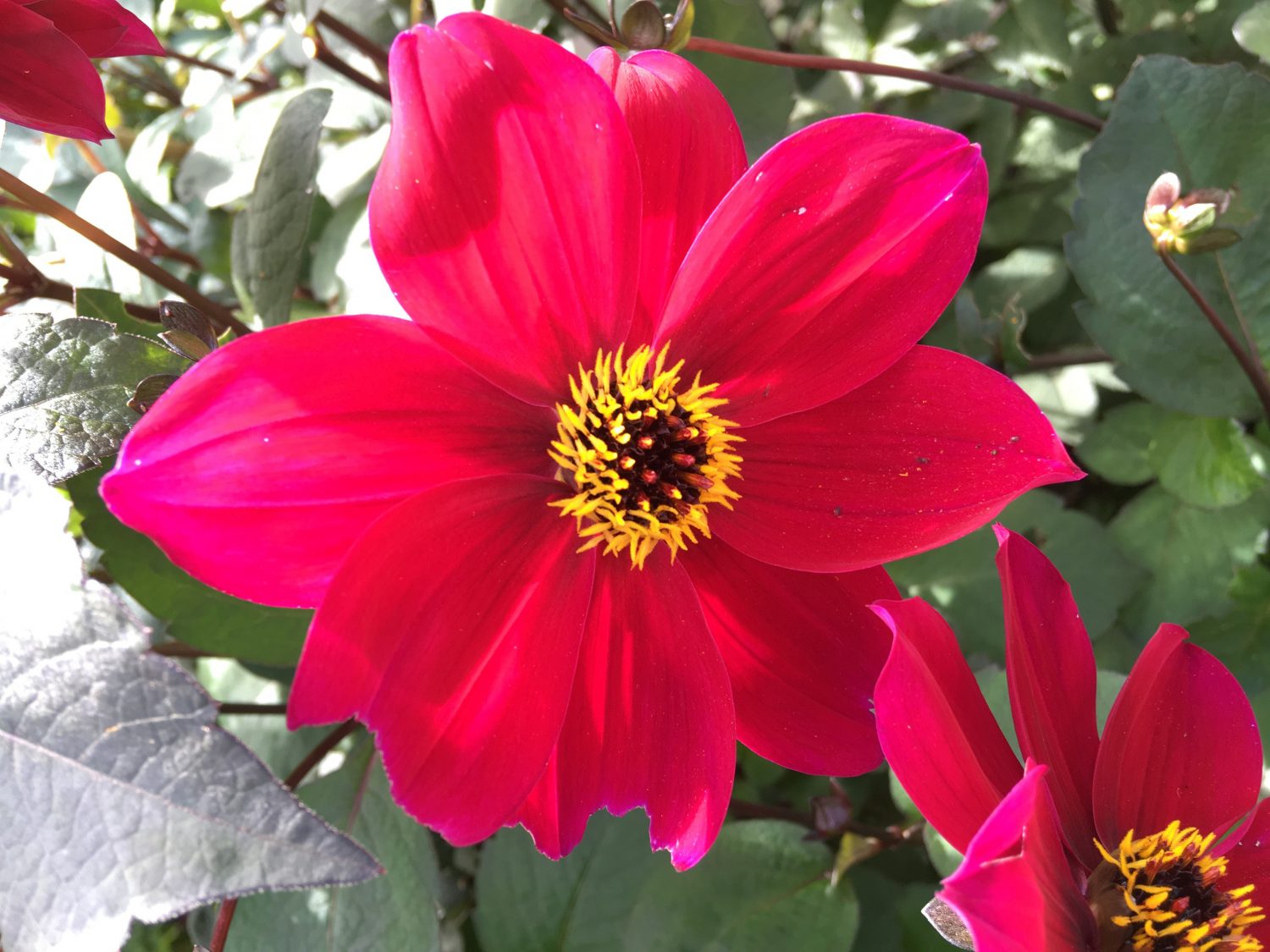 Dahlias are the jolliest of flowers