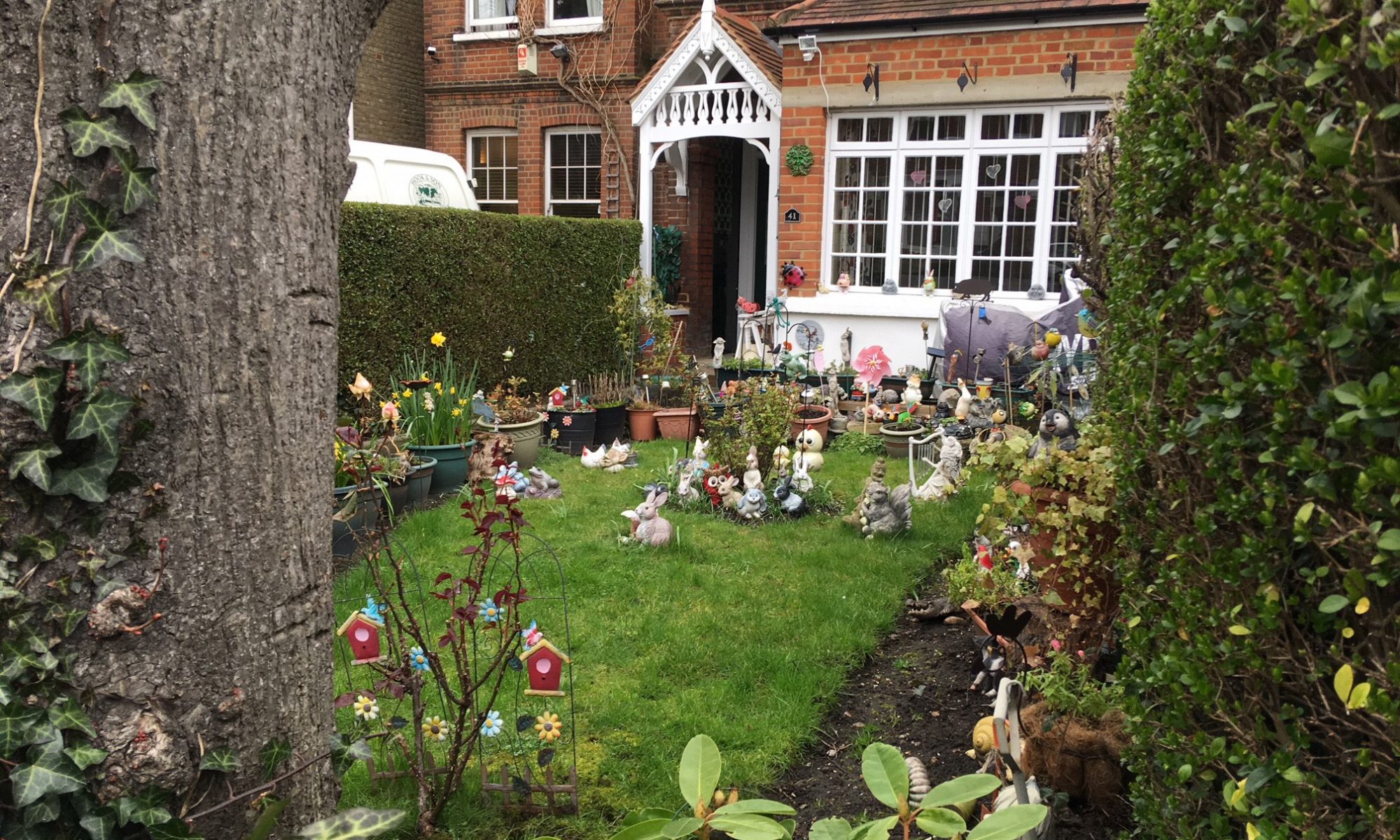 Take pride in your front garden, says Sue Whigham, and the whole neighbourhood will thank you (gnomes optional…)

A few weeks ago I was early for an appointment in Canterbury. It was raining hard. To fill in half an hour and to walk the dog at the same time, I parked a couple of streets away from my destination and wandered up and down for a while peering at front gardens.

Here were the sturdy Victorian villas interspersed with a few later houses but the sad thing was that I couldn’t find one garden that lifted the spirits even one little bit and the sight of all these wasted spaces was soul destroying.  And to cap it all, the only people I saw on that gloomy morning were three young men wearing protective suits complete with netting over their faces, sawing away at what remained of a tree in their front garden.

Front gardens are surely so important, to lift the spirits on your return home generally, to provide a sanctuary for wildlife close to home – and to cheer up the passer-by.

A week or two later I was in Putney where the contrast was palpable. There the gardens varied down this particular street. Here a garden full of gnomes and little people and there ones which combined off street parking with lovely, mature plants and trees. I liked one double-fronted house and its garden so much that I felt moved to knock on the door to see if I could take a picture of the planting. How to make new friends…

Underneath a mature magnolia, just coming into bud, was a great mass of the Corsican hellebore, Helleborus argutifolius, which can take both full sun and partial shade. In this planting scheme this wonderful plant will look good all year with its large, veined, prickle toothed, evergreen leaves complementing the apple green flowers.

To the right of these were five diagonally planted box hedges with gently curved ends. The whole was edged with large specimens of the sacred bamboo, Nandina domestica, again an evergreen, and with very showy clumps of red berries at this time of year. Finally, at nose-level appeared another evergreen shrub tangling through one of the nandinas, a coronilla with its intensely fragrant pea like flowers.

I must admit that London’s micro climate means that plants like the coronilla are much happier than they would be growing elsewhere, especially after the winter we have just had, but it’s a thought, should you be wondering what plants to use which will give all round impact and are easily managed.

And then there are Bonnington Gardens, SW8 to visit for inspiration and to see what can be done in an urban space, by residents working together to bring a sense of harmony to a neighbourhood and ‘inviting in nature’.

The houses were originally built in the 1880s to house railway workers but after considerable bomb damage during the Second World War, the area was derelict and left abandoned apart from a walnut tree struggling on alone. By the 1980s all the houses around the square had become a giant squat, albeit the squatters were an eclectic and bohemian mix from the worlds of art, music, architecture and horticulture.

In the 1990s, when a local builder applied to use the site as a storage area, the council was alerted to the fact that they had ‘idle’ land on their hands and should do something about it. The residents were informed that the council were considering redevelopment and rapidly formed an association to do something positive to improve their surroundings.

They struck lucky with one of the local councillors who supported their ideas and £20,000 was allocated to building a garden on the site. At this stage Dan Pearson, garden designer and resident in Bonnington Square at the time, and his neighbour, also a garden designer, put together a scheme.

Once the garden was developed, with raised beds built on the old bases of the seven bombed-out houses, the Paradise Project began the following year with the greening of the local streets and their front gardens to create an all-encompassing lush, green space. Another smaller grant paid for trees such as catalpa, arbutus and Judas trees, vines and all manner of plants.

Vertical space has been utilised with climbers growing up the houses and even old telegraph poles provide support for plants such as Morning Glory, the whole becoming a sub-tropical paradise. And right from the beginning of the project, local residents began to use the gardens as an extension of their homes and people who had never gardened before got involved.

So, I think the aim for our front gardens is to create a green and inviting space, maybe using Bonnington as a shining example, to plant hedges to reduce the amount of dust and pollution around our streets, to balance hard landscaping and plants and accommodating cars, if needs be, with a judicious planting of ground cover plants that wouldn’t mind occasionally being run over, combined with a couple of paved tracks.

You could have gravel over a permeable sheet of something like Mypex to prevent weeds coming through and cut holes into the sheet where you want to plant. Try some of the creeping thymes, or easy, low growing perennials like Ajuga reptans. Fill up the corners of the site with shrubs to provide cover for nesting birds and insects. Plant up walls and fences.

In a shadier site use some of the pyracanthas; their berries will bring in birds and try some of the honeysuckles for both their fragrant flowers and juicy red berries. If you have room for a small tree, choose one of the varieties with an upright or fastigiate habit. Pyrus calleryana ‘Chanticleer’ is nice, particularly with its striking autumn colour, or one of the crab apples like Malus ‘Hornet’ or perhaps a fastigiate yew.

Have a couple of striking containers outside your front door and fill them up in the summer with fragrance. There are so many annuals like nicotiana which sown this spring will give you a long flowering season and plenty of welcoming scent as you open your front door. 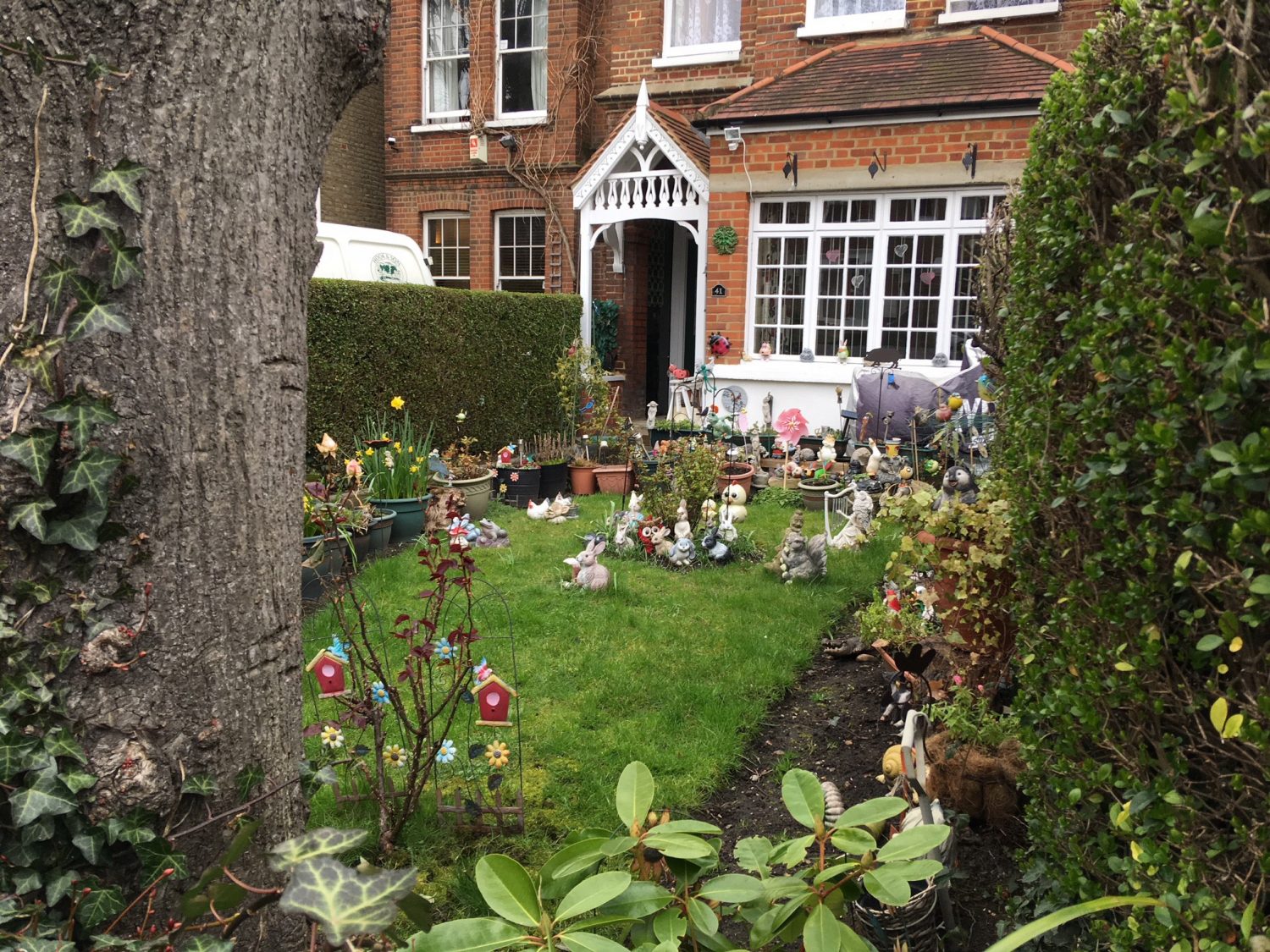 A characterful front garden seen on a trip to Putney 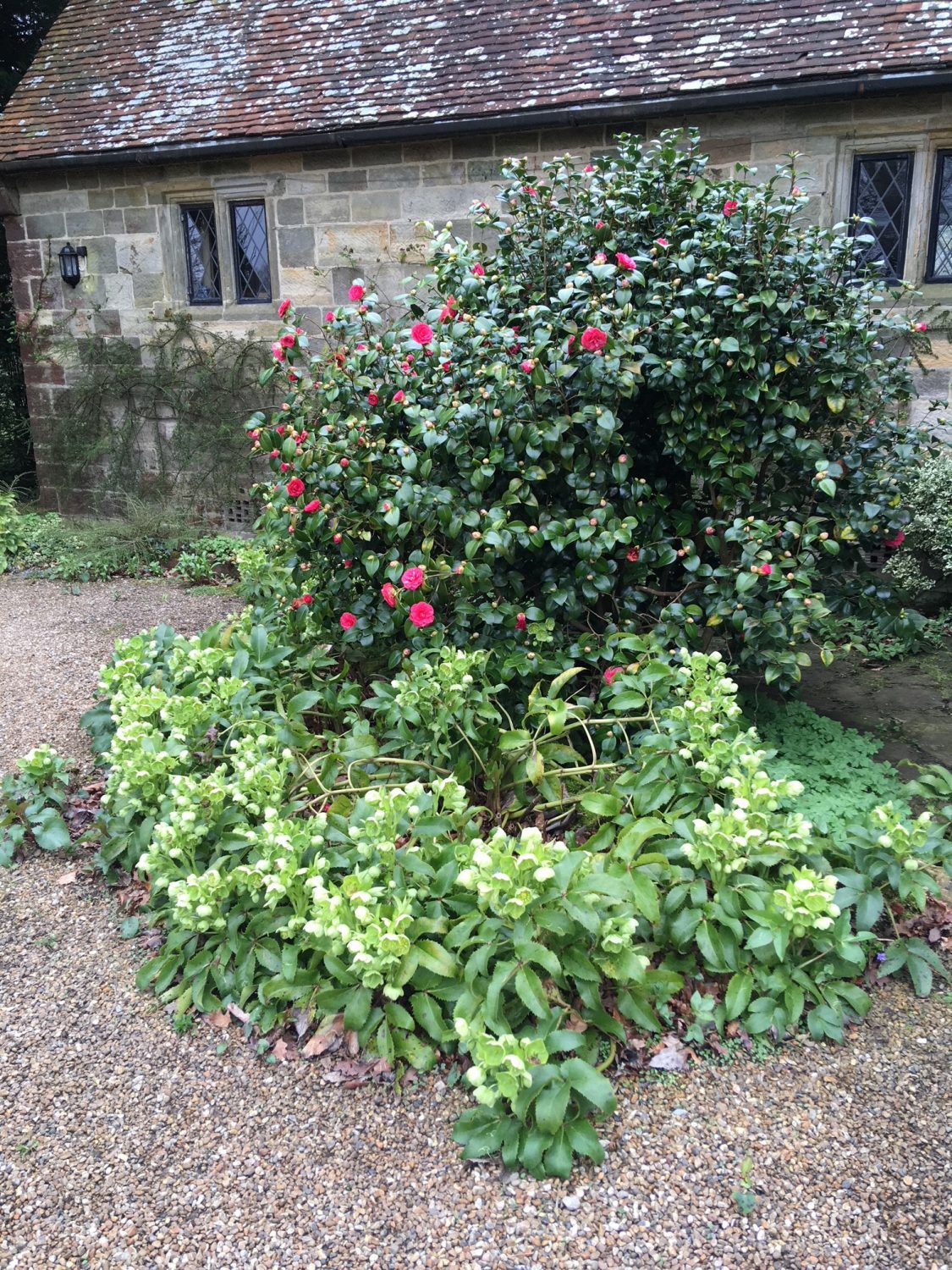 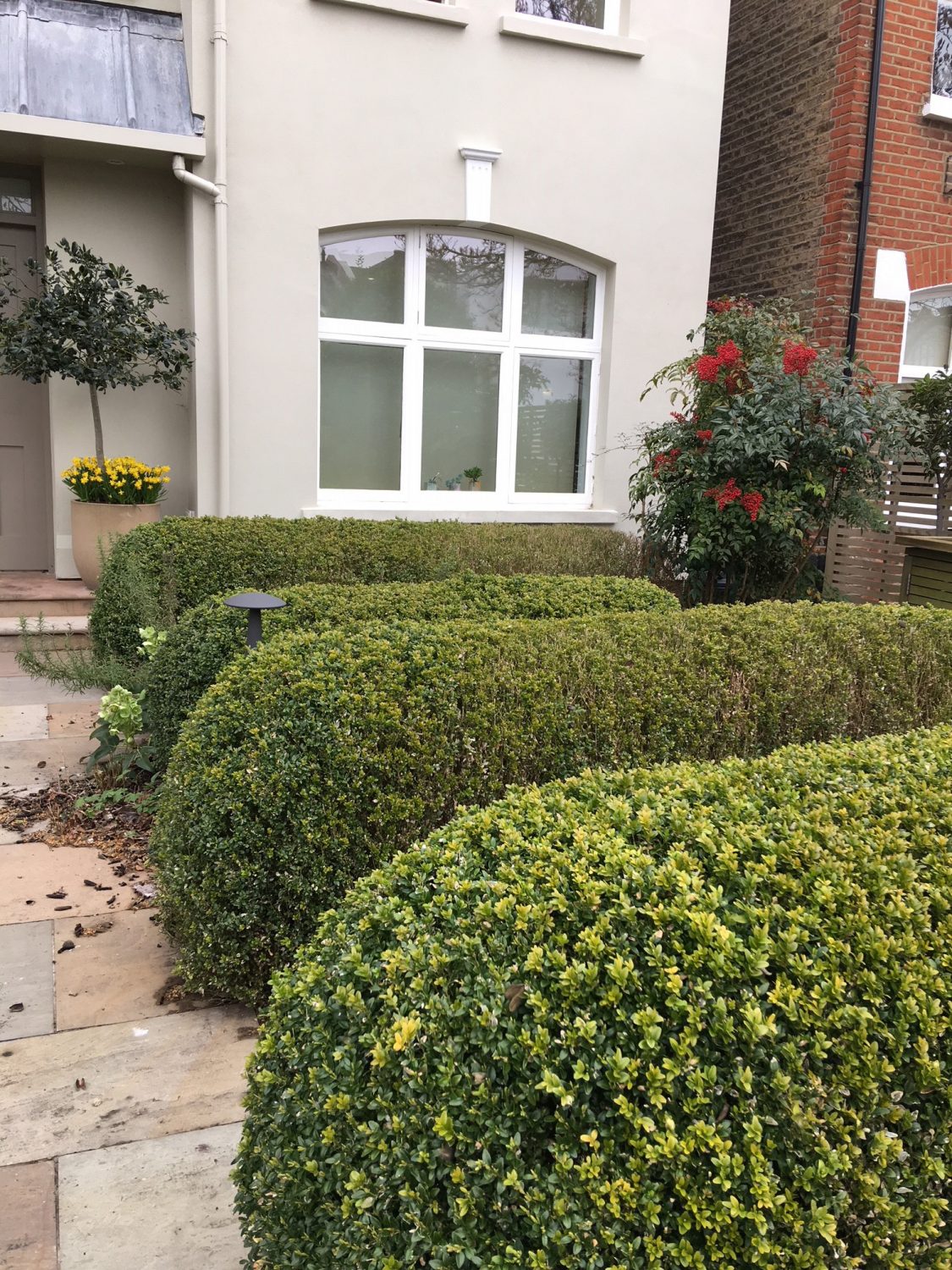 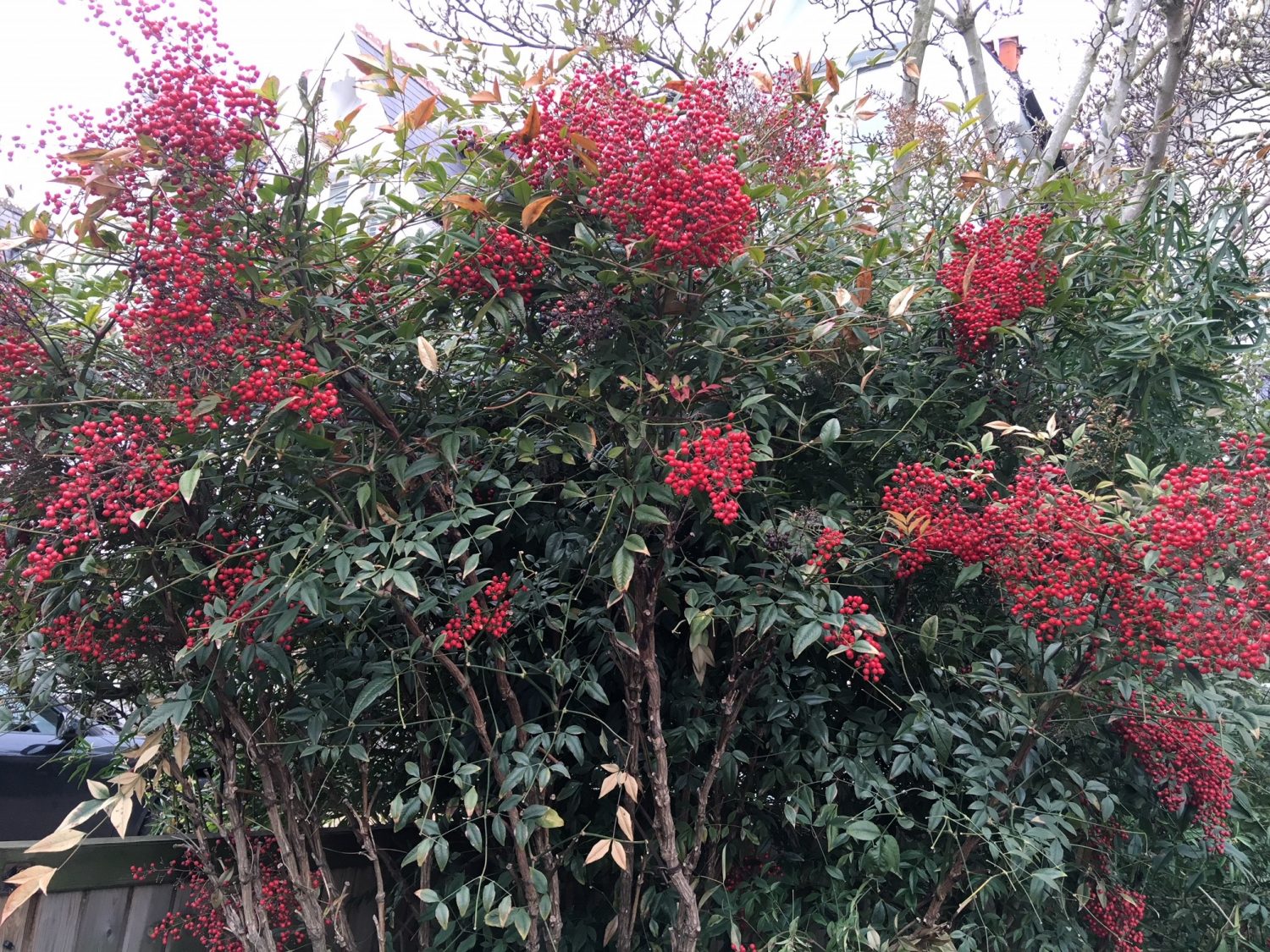 Large specimens of the sacred bamboo, Nandina domestica, with its showy clumps of red berries, in the same Putney garden