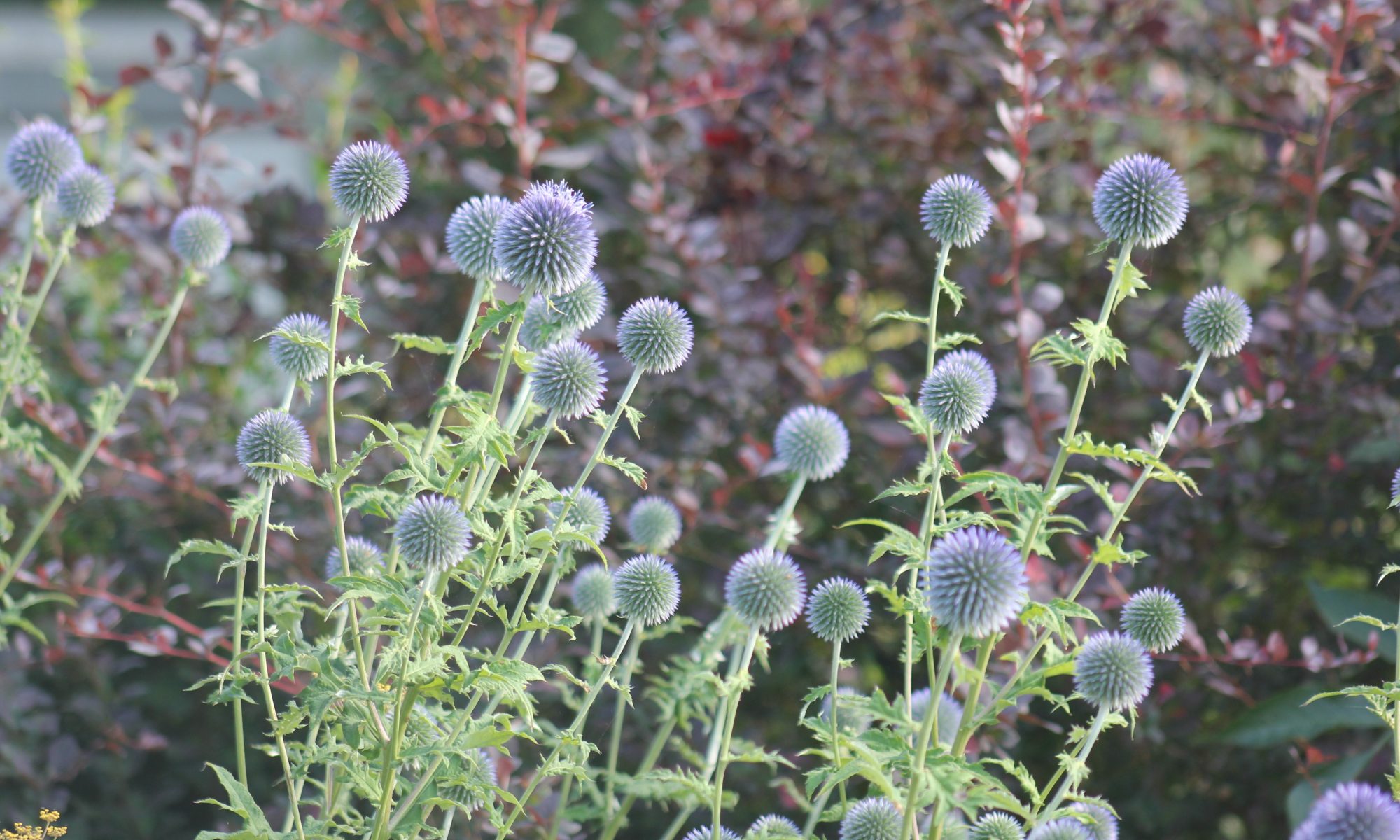 The roses may be over, but don’t despair, says Jo Arnell, there are plenty of plants to bring colour to the borders yet

It’s easy to think that the garden is on the way out this month. The early summer colour has faded and the borders could be looking careworn and frazzled. But take heart, for it need not be so. There are ways of turning the August garden from crestfallen to crescendo, with plenty of plants to carry us through the late summer and on into the golden autumn days.

You can’t beat annuals for long-term reward. This is down to their short, but action-packed and free-flowering lives. They only have one season in which to grow, flower and set their seed, so if you thwart them by continually dead heading, they will keep on trucking along, flowering until the frosts. Floriferous and reliable annuals include Cosmos, Antirrhinums and Zinnias for sun, and for the shadier parts of the garden Nicotiana, Impatiens and violas.

We tend to get carried away at the start of the season and rush out to fill our trolleys with cottage garden perennials and plants that are in bloom at the start of the summer. The trouble is that June blooms don’t always last for long. Many will have finished flowering by July and can also have quite straggly foliage by that time too.

There is a way to perk up the early flowerers, plants like delphiniums, lupins, catmint and geraniums. It’s a bit ruthless, but will pay off in the end. You just cut them all back down to the ground as soon as they’ve finished flowering at the beginning of July – and then by the end of August they will be back, with a repeat show of flowers and tidy new leaves.

So if you have cut back the early arrivals after flowering they should reappear for their encore at the same time as the later flowering perennials start. So borders in late summer can be even more flower-packed than in the earlier months.

Many of the late bloomers are in the daisy family: Rudbeckias, Echinaceas, Asters and Heleniums are at their best this month. The range of colours are suitably sultry, verging on autumnal; shades of dusky pink, mellow oranges, russet and mahogany, with splashes of blue and mauve from the asters. Some have long-lasting seed heads too, so once the flowers have finished they persist as silhouettes, looking sculptural when backlit against grasses in the autumn light.

The flowers of Sedum spectabile are a magnet for butterflies and bees at this time of the year. They are a great addition to the front of the border and will provide long-lasting colour right through the autumn, as the nectar-packed flowers fade into attractive seed heads in shades of russet and bronze. Sedums are easy to care for and will put up with many situations, but given a choice they’d prefer sunshine and free-draining conditions.

Dahlias are in full swing now, and with any luck will provide a sumptuous late summer spectacle until the frosts. They are greedy plants and need rich, well drained compost and plenty of moisture. Dead head them regularly to keep the flowers coming and then, once the frost has cut them back, either lift and store the tender tubers somewhere frost-free for the winter, or heap up with mulch and leave them to take their chances…

Don’t fixate on flowers – foliage can often have as much colour as a flower and is a good deal longer lasting, once the flowers are gone. Large leaves and architectural foliage will also bring structure and unity to the border and help set off flowers to good effect.

Try the exotic looking Melianthus major, with its glaucous, serrated leaves (it will be cut down by the frosts as it is slightly tender, but perks up again in the spring). Euphorbia ‘Wulfenii’ also has glaucous leaves, but these are evergreen and it has the added advantage of handsome lime green bracts in spring.

A useful, if diminutive, group of plants that seem to grow in any situation, including tricky dry shade are the Heucheras. There is a striking, almost black variety called ‘Obsidian’, several cultivars come in opulent maroon shades, but there are lighter colours too, and for a splash of orange, try H. ‘Marmalade.’

Many of the ornamental grasses will be flowering around now, sending up shimmering golden, silver or russety flower spikes. Some are demure and ‘grassy’, others have dramatic plumes or ‘feathers’ of flowers.

There are tall grasses that will do the job of a shrub in the border, bringing instant height and presence, but in a more graceful and airy way than a shrub. Miscanthus zebrinus, or M. ‘Silberfeder’ are good ‘shrub substitute’ grasses. Calamagrostis ‘Karl Foerster’ makes a tall golden pillar and will bring rhythm and punctuation to a scheme, while the low growing evergreen Stipa tenuissima is an airy and irresistibly tactile little grass for the front of the border.

Shrubs provide height, presence and act as the backbone of the border and there are some great late summer flowering shrubs that have their starring moment right now. Hydrangeas have long-lasting bracts that fade beautifully into autumnal shades (and also make great cut flowers), Hibiscus will provide an exotic boost in shades of pink, blue or white, and the Buddleias will bring in butterflies and bees.

Smaller shrubs like Caryopteris, with its sky blue flowers (there is one called ‘Heavenly Blue’) are useful in the middle of the border, and the low growing Ceratostigma willmottianum, with its cerulean blue flowers will also have brilliant autumn foliage.

If your summer pots are starting to look a bit careworn and straggly, or you want to give the garden an instant colour boost or focal point, plant up a sumptuous late summer container. There’s a great range of late summer/early autumn bedding plants around now, and you can also use perennials like Heuchera, Dahlias, Crocosmia, grasses such as Panicum or Pennisetum to bring a vibrant splash of colour and long-lasting interest on paved areas near the house.

The summer show is definitely not over yet, in fact it could just getting going again. With a bit of luck and a few extra plants, the garden borders can party on until the frosts come. Let’s get out there. 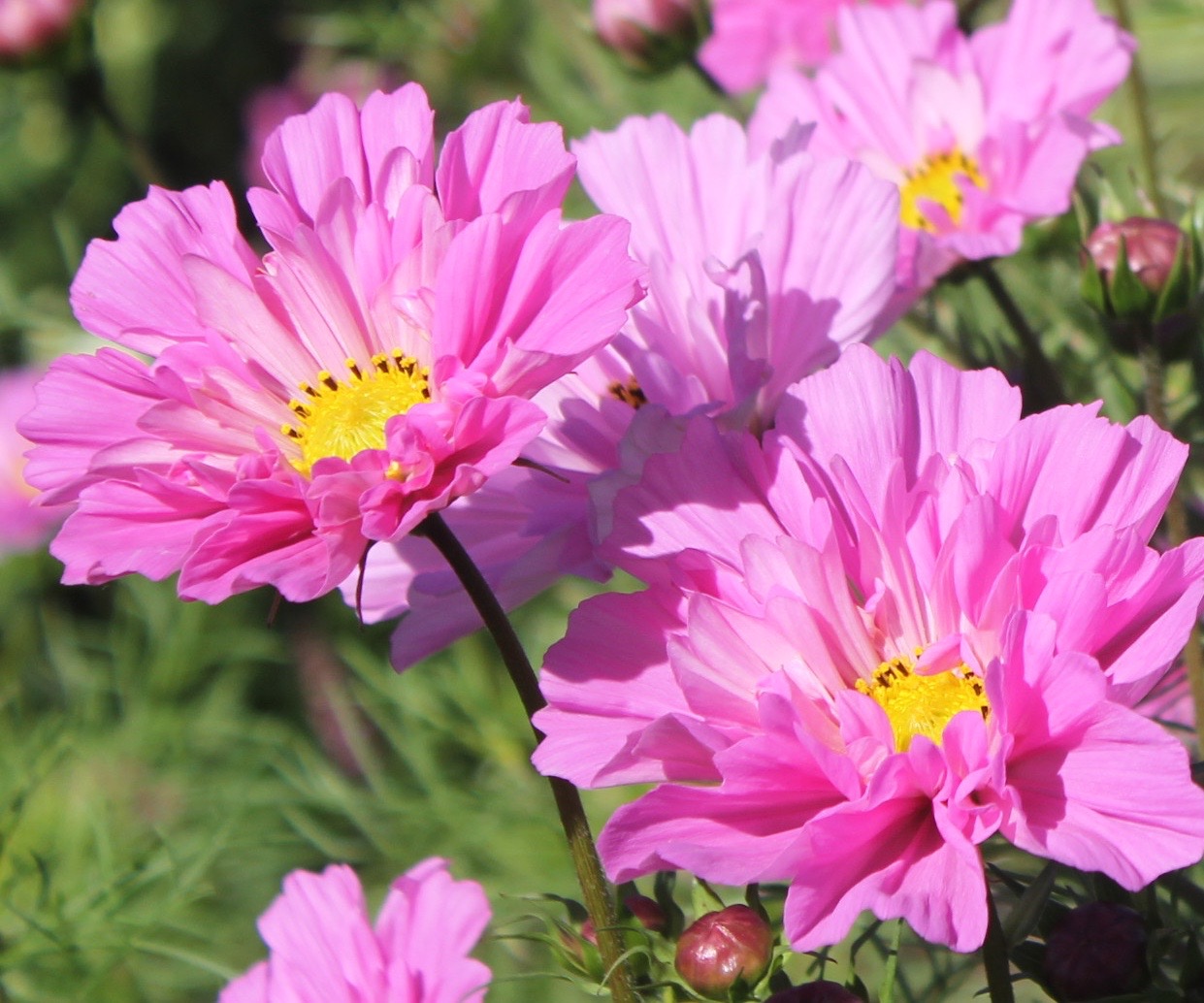 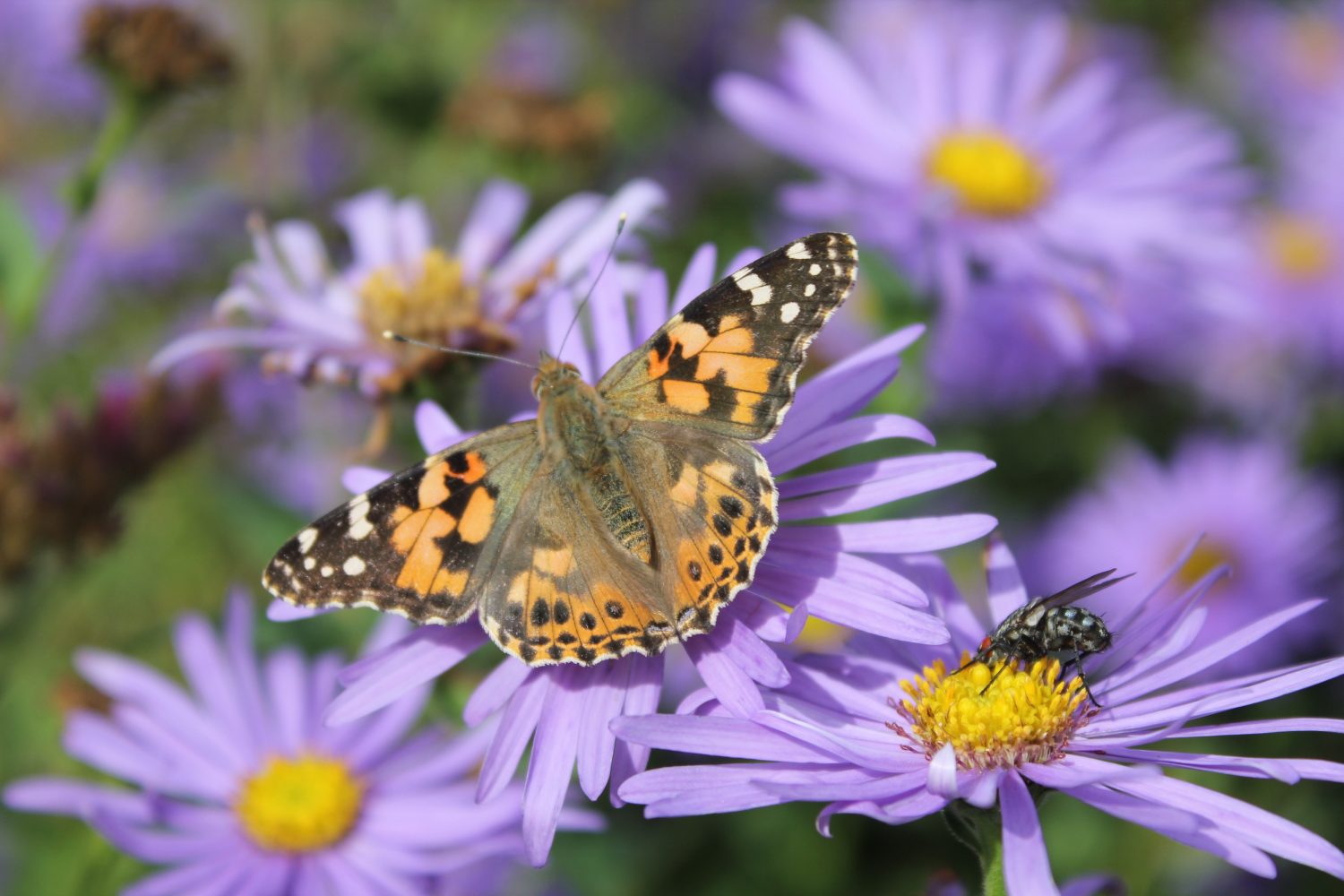 A butterfly enjoying an aster 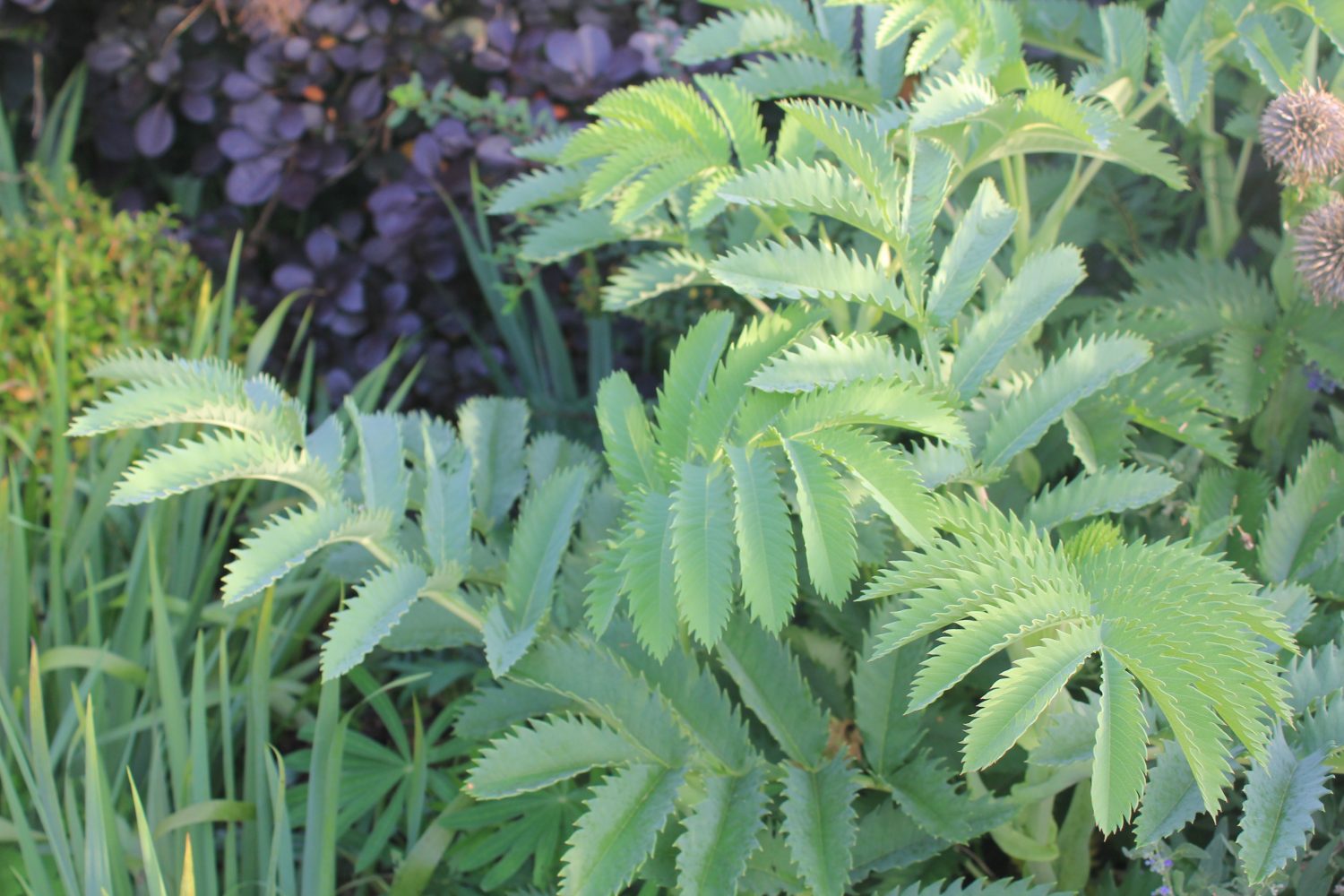 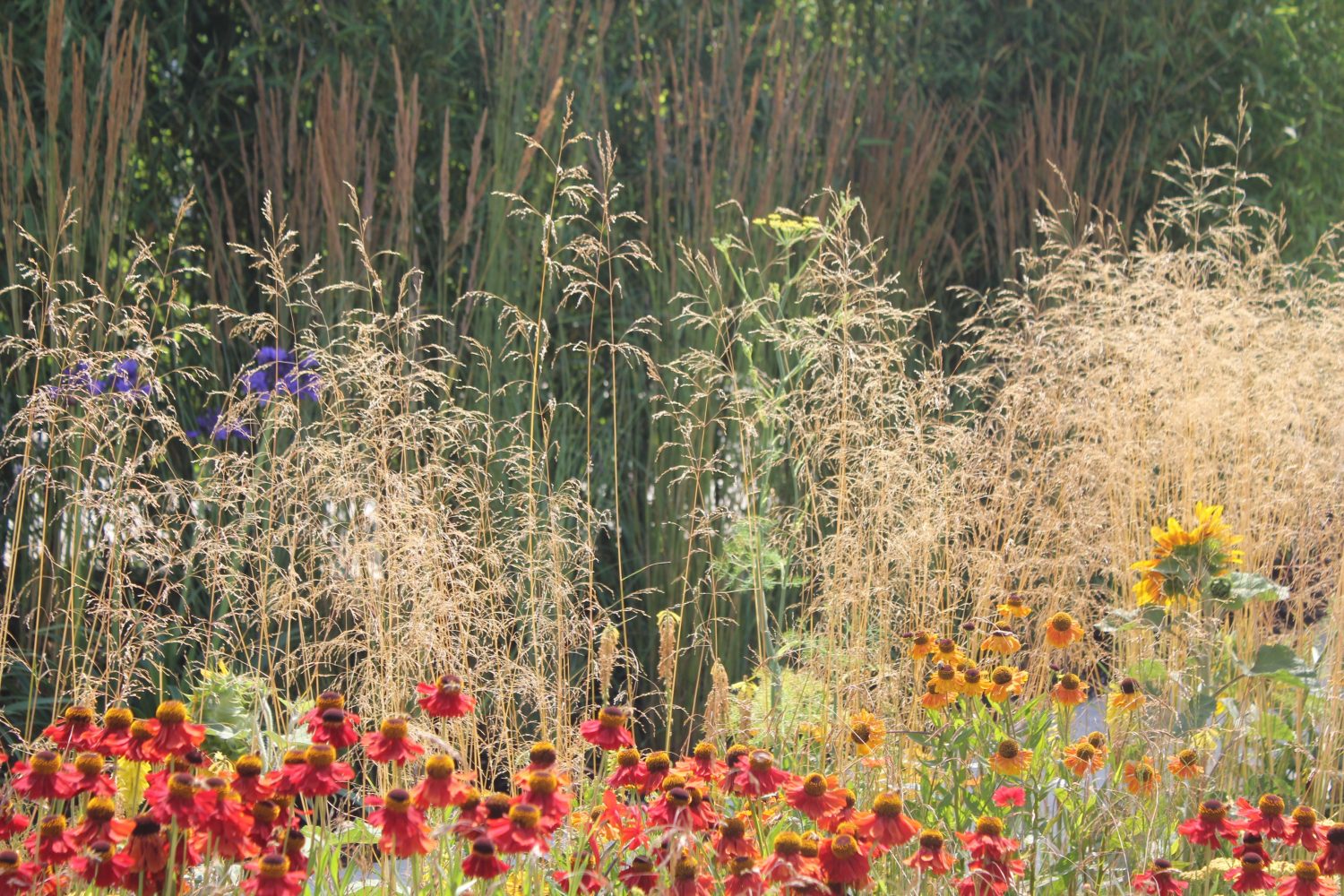 Heleniums creating a pleasing contrast with these grasses 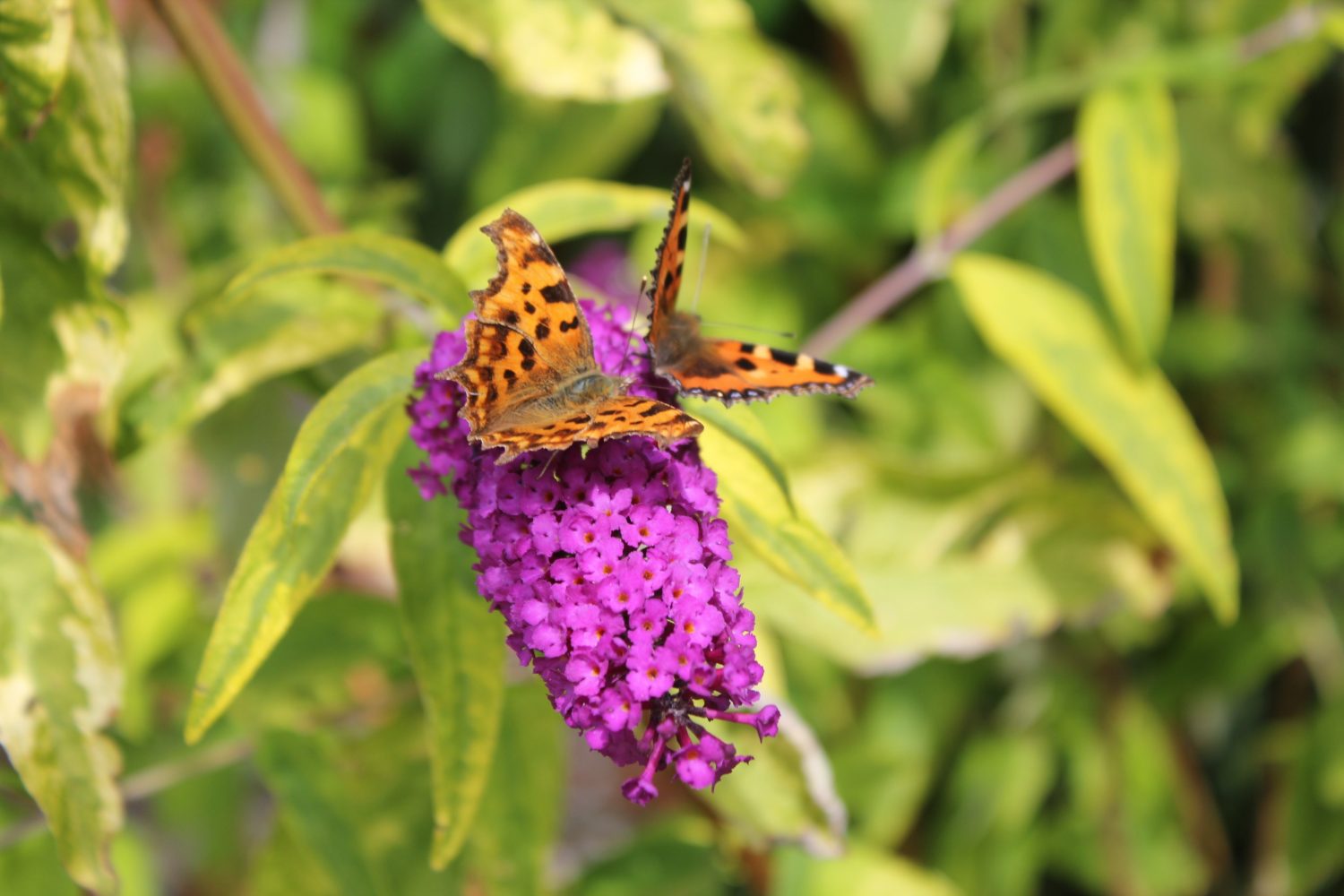 Buddleia is a favourite among butterflies 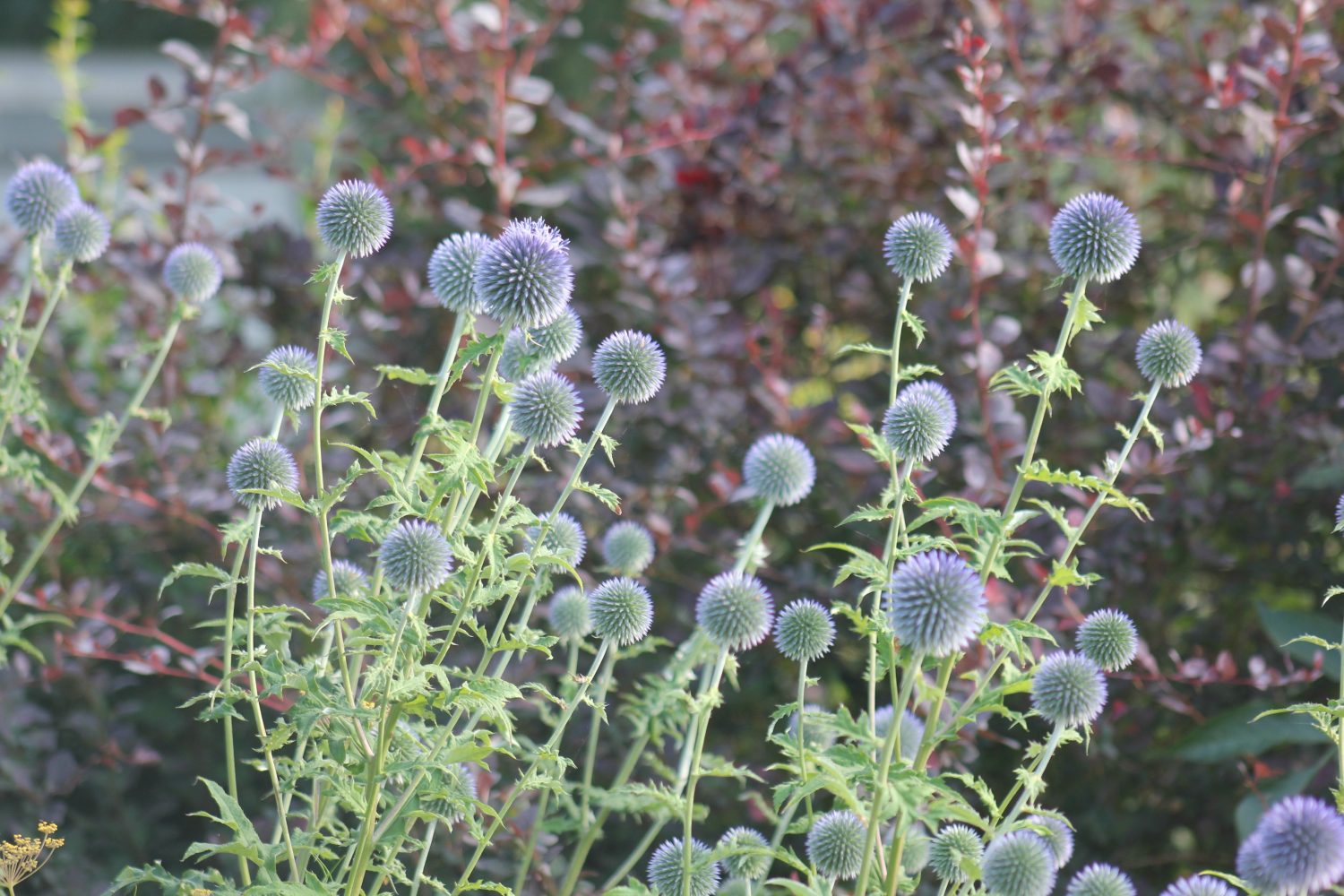