Portrait of a Garden – Great Dixter 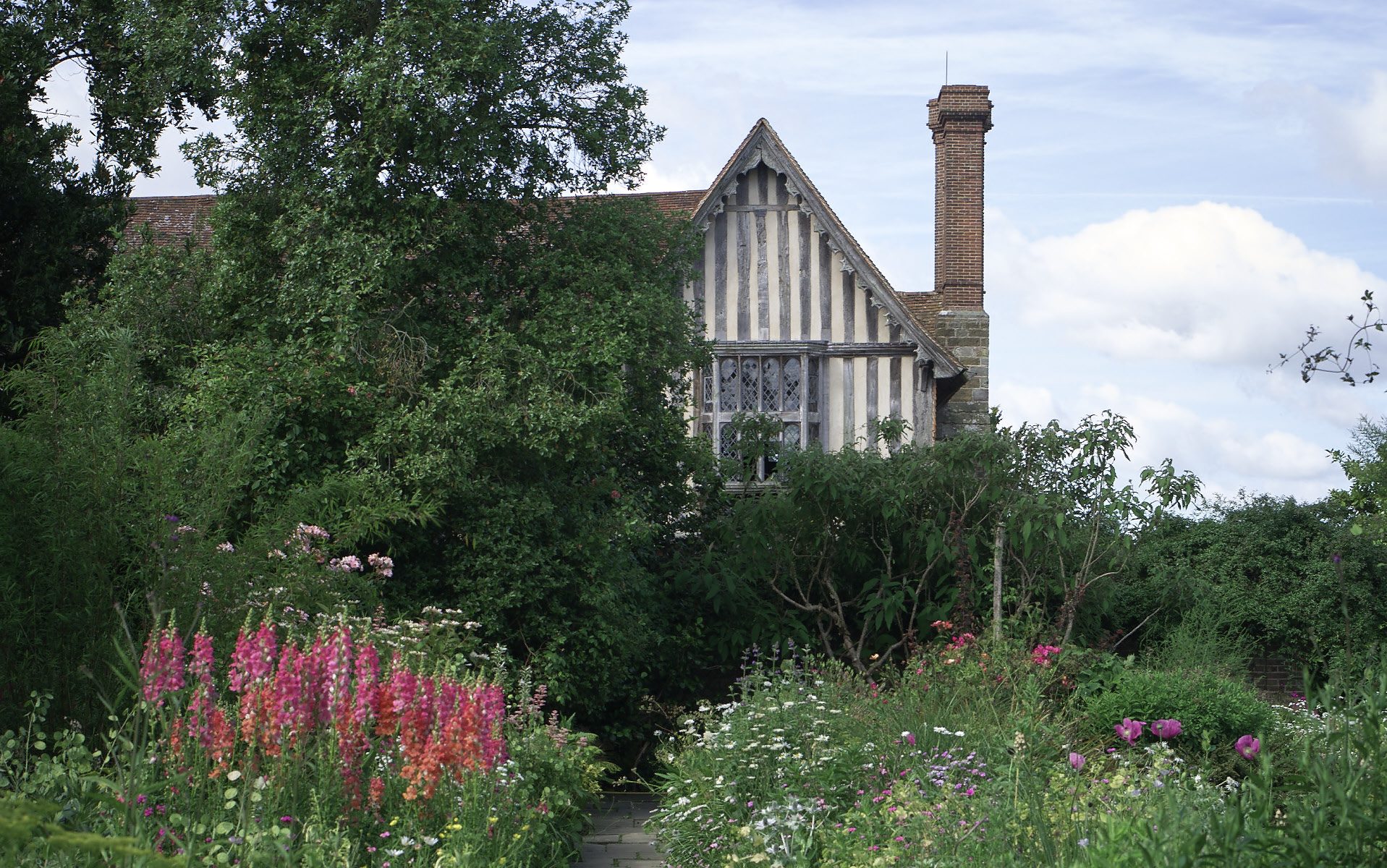 Jo Arnell shares her impressions of a year at Great Dixter, one of the great gardens of England, inspired by a new tribute by esteemed photographer Julian Anderson

Everchanging, always interesting, often breathtaking, Great Dixter is a fascinating place to visit. Famous for the giant Alice in Wonderland topiary, installed by the father of its creator, the late Christopher Lloyd, it is a place of floaty meadows and singing plant combinations, all set off by Lutyens’ architecture and design.

For the last ten years in the care of world-renowned head gardener Fergus Garrett – who joined Lloyd there in 1992 and whose idea it was to put cactus and other exotic plants into the once Edwardian garden – it’s one of my own very favourite gardens to visit. I return to it again and again and I’m always enthralled.

Eminent photographer Julian Anderson (who has 27 pictures in the permanent collection of the National Portrait Gallery) was equally inspired and has spent a year taking photographs as the weather and the light change through the seasons. The results, some of which can be seen here, are being gathered into a sumptuous, crowd-funded book.

“I’ve visited Dixter on a weekly basis, at different times of day and in differing weather conditions, for one calendar year,” he says. “The result is a series of pictures chronicling Dixter’s evolving life, as seen through the eye of a portrait photographer.”

As well as contextual shots of areas of the garden, Julian’s pictures capture moments: small unfurlings, intimate snapshots and minute effects. Many of these result from changes in the weather. Touches of frost, mist, and slanting rays of sunshine are beautifully recorded as the garden drifts, shifts, bolts and blooms through the months.

Great Dixter is a garden that is magnificently in tune with the seasons and no visit there is ever the same. There are always new combinations of plants, exciting experiments in border design, all held together by the constant – and very characterful presence of the house and yew topiary.

Here are my own, very personal, impressions of ayear there.

My impressions of Dixter in late spring (the gardens open to the public in April) are of tulips and topiary. Mad, darkly looming yew shapes: peacocks on pyramids, castellations and huge chunky archways. They are too impressive to be whimsical, but you wouldn’t bat an eyelid if you came across a talking caterpillar on a giant mushroom somewhere here.

The yew is a dark green backdrop, acting as both anchor and stage set, showcasing the luminous dancing troops of tulips among the fresh new growth of perennial foliage. The first wisps of monstrous fennels are already prominent, yet to rear up to their eventual dizzying heights, you can almost hear the squeak of them as they expand among their companions in the stock beds.

It is joyful and uplifting to come to Dixter in May, when the spring bulbs are sounding their fanfare and the wave of surging green is making its summer promises.

Early summer starts with drifts of opium poppies – which give the relaxed impression of  being self-seeded, but are actually grown from seed and planted out as seedlings – among clouds of airy purple Thalictrum, abundantly buzzing meadows and the beginnings of the bedding. But not bedding in the municipal style, instead, wild and outrageous experimental bursts of colour, combined in often unexpected ways.

Flower borders at Great Dixter, Christopher Lloyd showed us in his book, The Adventurous Gardener are exuberant, dynamic and often groundbreaking.

Lloyd famously caused a horticultural intake of breath when he and Garrett ripped out the rose garden – created by Lloyd’s mother – and replanted it with exotics. A few roses still manage to eke it out there, swamped by a glorious outrage of bananas, palms, canna lilies and ginger.

By late summer the yew hedges and topiary have become floating green islands on a riotous sea. Only those in the meadows are calm, as the wildflowers and grasses fade gently into dusty gold, setting seed and dying back for the winter.

Self-seeding and the use of accidentally and deliberately planted annuals and biennials are a big feature of the style here at Dixter. Some are magnificent and become focal points. Verbascum bombyciferum – a huge yellow spire with felty grey leaves – tall teasels, tame thistles and evening primroses make arresting focal points.

Some are gentler; swathes of Verbena bonariensis and Tagetes ‘Cinnabar’ wash through the borders, filling out into tapestries and impressionistic panoramas. Late summer here is an endless lesson of colour effects and artful serendipity.

The start of autumn at Great Dixter is as spectacular as high summer, the exuberance not dimmed until temperatures dip and the sun hangs lower in the sky. The borders are still in full swing, when those in other gardens have fizzled out and become drab echoes of themselves.

There is a slow softening as the days shorten; the light slants among the grasses, and the narrow paths, now festooned with foliage, can wet your legs with dew or recent rain as you brush past.

By the time the garden closes to the public, the colours are mellowing into biscuity golds, rusts and dusty purple. The herbaceous plants and flowers start to die back and now the art is in dying gracefully, leaving photogenic stems, seed-heads and berries.

At the top of the garden, pumpkins festoon the compost heaps, ripened on the warm and cosy piles of meadow plants and grass from previous seasons. They will be gathered in before the frosts arrive and are then clustered in groups in the house and the porch, posed, as if waiting for a still life painter. They are ornamental, but, like all the vegetables grown here, are completely edible too and used as meal ingredients for the staff and visitors.

The garden is shut to the public in winter, but I can imagine that this is when the architectural shapes of shrubs, trees and evergreens come to the fore. The grasses will stand unbowed until spring, perennial seed-heads and teasels silhouetted against them in the low winter light.

Cotoneaster horizontalis, so often overlooked or used in dull corners in other gardens, is shown off here as a focal point, with its zig-zag of herringbone stems overlapping into a sculptural mound.

Julian’s book affords us the pleasure of some out of season glimpses of the garden while it is sleeping, frost enhancing its curves, mist settling like a soft blanket across the meadows and the odd poignant leftover from the summer hanging poetically, as if it has been waiting for Julian’s camera all year.

For the full ‘Dixter effect’ you really do need to visit more than once, you will find something different and interesting every month of the year, so I recommend a season ticket.

If you are unable to get there, or would simply like a linen bound companion, Julian’s sensitively honed portrait is an atmospheric evocation of an iconic and dynamic garden.

For details of Jo Arnell’s courses and workshops look at hornbrookmanor.co.uk  or call 01233 861149

Julian’s book is being crowd funded. To support this project please visit kickstarter.com/projects/1006138048/great-dixter-portrait-of-a-garden 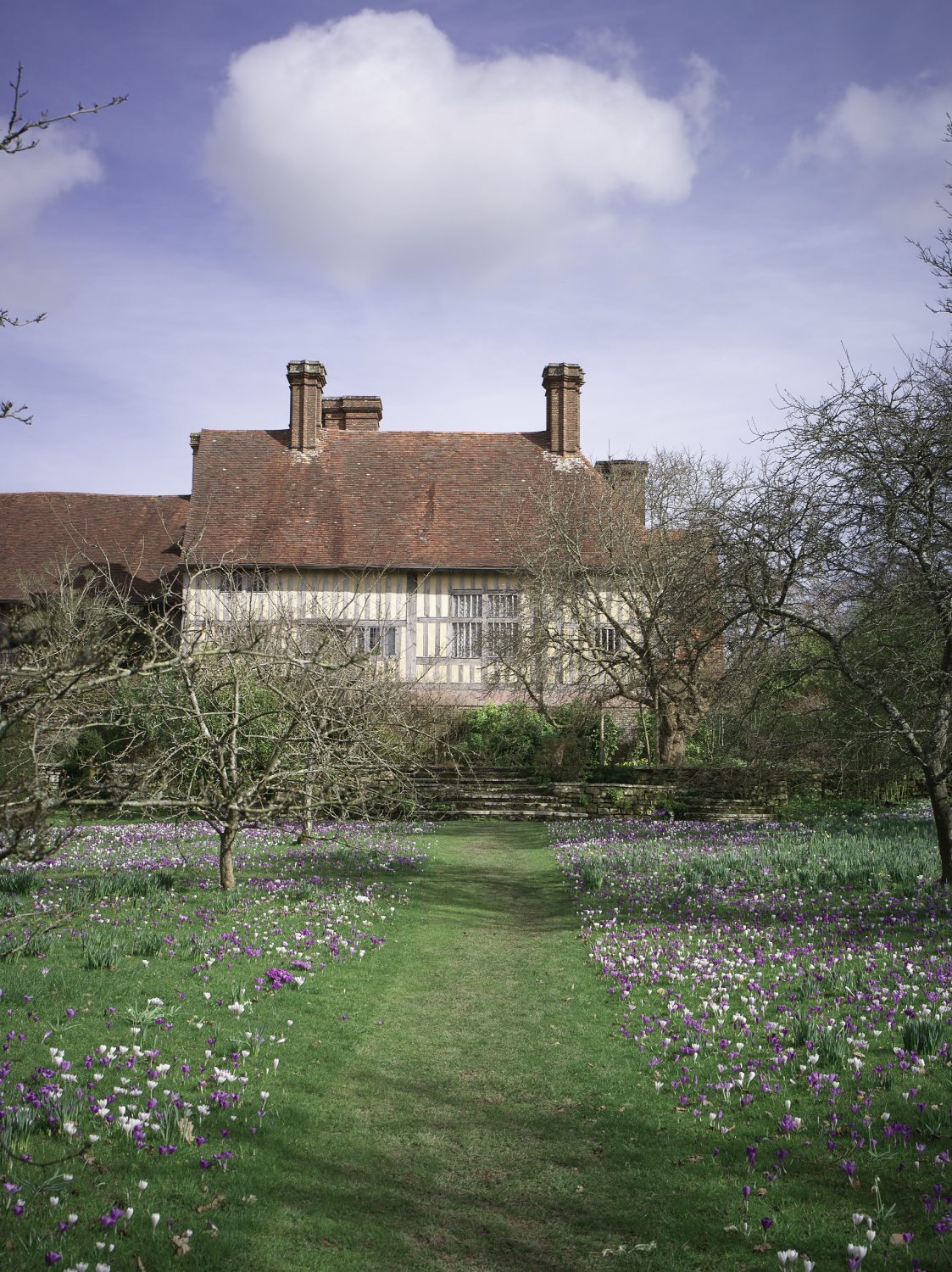 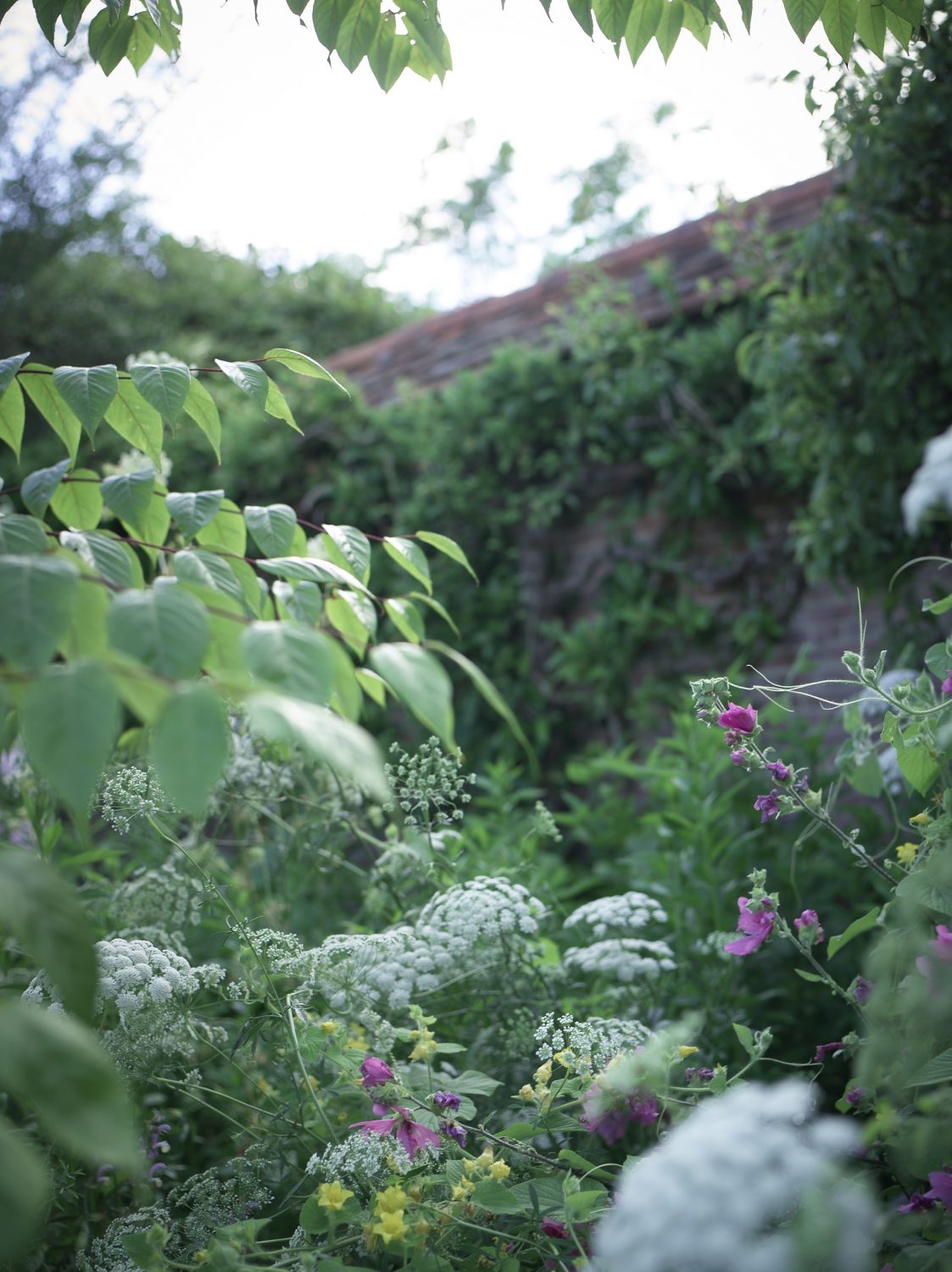 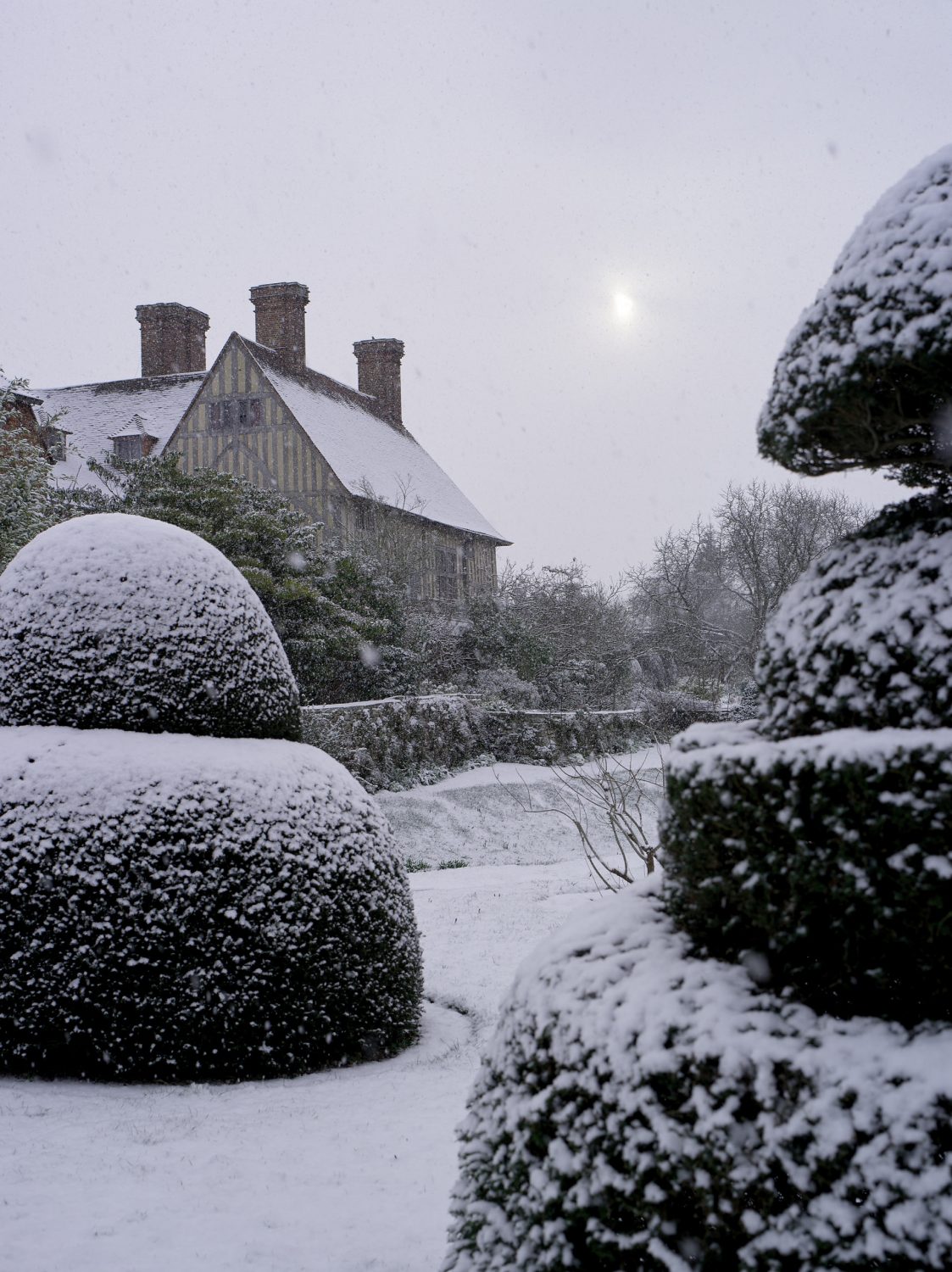 Great Dixter under a blanket of winter snow