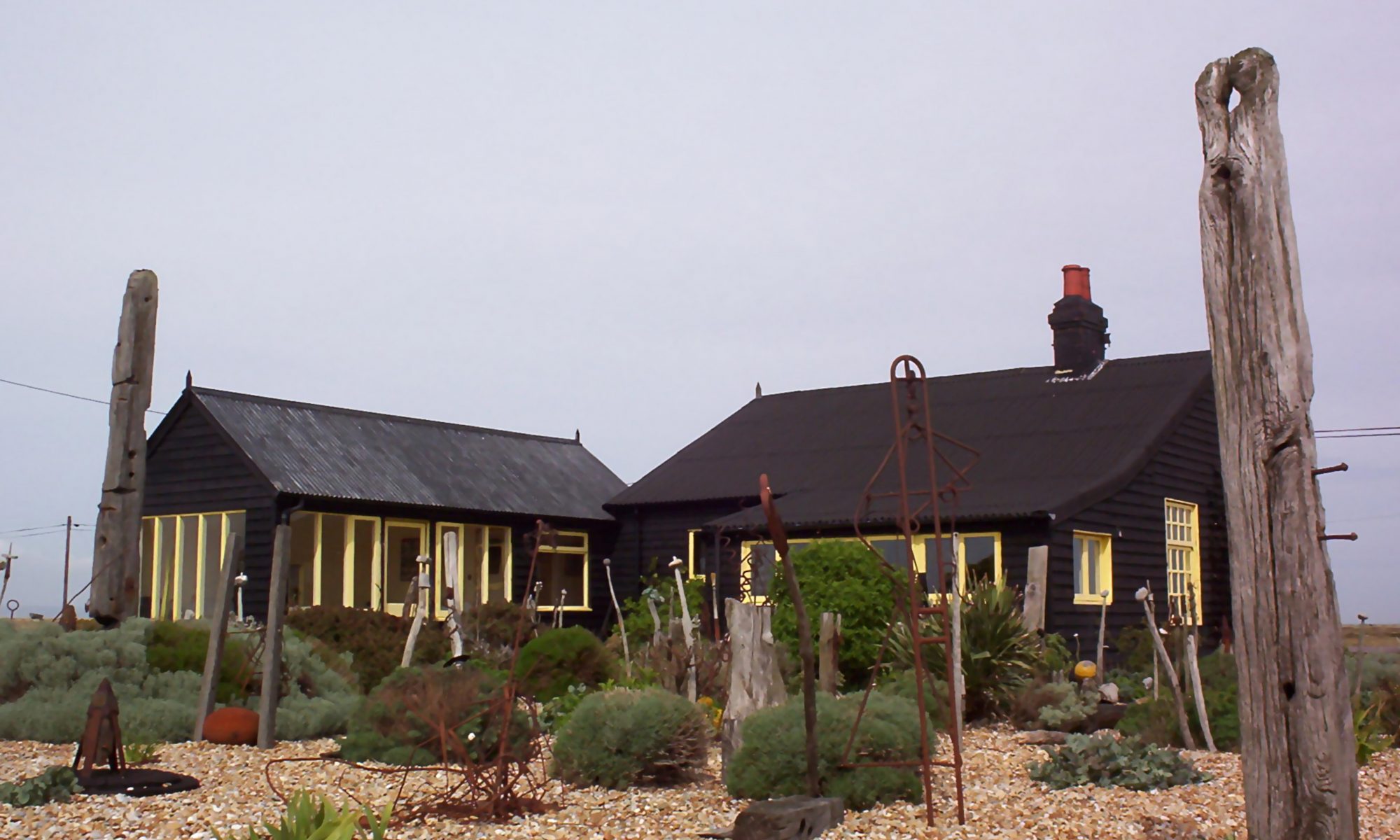 In the spring of 1986, Derek Jarman, film maker and life long gardener, was on the hunt for a bluebell wood to use in a film that he was making (The Garden). He and his companion decided to head for The Pilot, Dungeness for a lunch of fish and chips and afterwards visit the old lighthouse down at the far end of the beach.

Apparently he then said, to quote, “There’s a beautiful fisherman’s cottage here, and if ever it was for sale, I think I’d buy it”. And it was and he did. The iconic shingle garden at Prospect Cottage began accidentally with a driftwood stake collected from the beach with a beach combed knuckle bone atop, used to prop up a transplanted dog rose – and the rest really is garden history.

Dungeness is a wonderful, wild and beautiful landscape with seasonal extremes that you could never imagine being conducive to garden making, such as strong sunlight, low rainfall, and violent easterly winds which carry in salt spray, but it is also home to very many indigenous plants which thrive in such conditions and have adapted to living on shingle. One of the most extraordinary is sea kale, Crambe maritima, and how beautiful it is too. (And whilst it is edible, it might not be a good idea to harvest any from this particular site as the plant apparently collects radioactivity from Dungeness Power Station far more than any other plant).

In winter the plant disappears into the shingle; the only sign that it is still there at all is a corky stem with a fat bud waiting to emerge as the weather warms up. And so it does. Round about March the first sign of life is the sprouting of crinkly purple leaves which, as they mature, become a glaucous bluey green. Then you have the strongly honey scented sprays of white flowers and then finally a fantastic display of hundreds of pea-like seeds As the end of the year nears, both the seeds and stems lose any vestige of green and turn a rather glorious parchment colour. The winds blow and the leaves rot, leaving the seeds to be carried away over the vast expanse of shingle.

Award-winning garden designer, Emily Erlam, has created a naturalistic garden at Dungeness around a converted research station. It is so interesting to read how she designed the garden to fit into the surroundings and that two thirds of the garden is a Site of Special Scientific Interest and can’t be interfered with in any way, let alone walked on. She climbed up the lighthouse (visited so many years ago by Derek Jarman on that spring day in 1986) and used a visual template of the most interesting shapes from the surrounding landscape that she looked down on, to shape the paths and beds in her garden design. She also took into account the fact that shingle without vegetation tends to sink lower than that which is protected by mounds of vegetation and mirrored those undulations in the design.

She has incorporated plants that grow naturally at Dungeness with achilleas and blue amsonias, perennial salvias and thymes, as well as that rather beautiful moor grass, Sesleria autumnalis. This versatile grass can be invasive but is marvellous for this sort of planting as once it is established, it is drought resistant and rather thrives on neglect. And she has used one of my favourite plants, Elaeagnus ‘Quicksilver’ as loose hedging as it creates a wind barrier and affords some privacy.

And now, looking out of the window at a particularly mossy and rather yellowing piece of lawn, I think I’m rather at one with Derek Jarman when he said how glad he was that there were no lawns in Dungeness. He believed them to be ‘against nature, barren and often threadbare – the enemy of a good garden’.  So perhaps a gravel garden which works on every scale and is pretty easy to manage is a good alternative. No mowing. Great.

There aren’t very many rules for gravel gardens and really once you have done the initial groundwork thoroughly, planting is the exciting bit. You can have fun with your colour combinations; with your textures and foliage, and can have an all year round garden by incorporating evergreen shrubs or small trees ranging in different heights to add to the garden’s structure. Perhaps, once restrictions are lifted, visit Beth Chatto’s famous gravel garden in Essex where she ripped out a car park, compacted soil and all, to make an inspirational gravel garden on a large scale. Or, closer to home, have a look at the new Delos garden at Sissinghurst for inspiration.

Gravel gardens ideally thrive on a well-drained sandy soil with low fertility so test your soil and find out what you have if you don’t know already. Once you have removed the old grass and if you have a clay soil, you may want to incorporate plenty of organic matter before adding grit for drainage before laying and pegging down landscape fabric before adding gravel. Ideally your gravel should be local (cheaper) and about four inches deep. Use an angular medium grade. Remember though that if you are going to go for a predominantly Mediterranean or sea side planting, it’s probably not a good idea to improve the soil as Mediterranean plants thrive on poor soil.

Start with foliage plants and work towards any manner of flowering perennials and bulbs. Alliums would work well as would Crinum x powellii and nerines. The sky is the limit.

There are two schools of thought about laying down landscape fabric too and this is a personal decision really. You might find that the fabric will restrict the growth of any weeds but there is another opinion amongst gardeners that says that you need the worms to pull the gravel stones down into the soil to improve drainage even further. If you’ve been ambitious and have a plan to create a large gravel garden you could of course have some parts dedicated to Mediterranean plants, so no organic matter and then improve the soil in other places.

Mediterranean plants might include cistus, especially those with fragrant foliage, sages, santolinas, artemisias, lavenders, fennels and all manner of herbs like oregano and rue, hyssop and rosemary. Add night scented stocks and like Prospect Cottage’s garden, have marigolds and Californian poppies.

Start with foliage plants and work towards any manner of flowering perennials and bulbs. Alliums would work well as would Crinum x powellii and nerines. The sky is the limit.

Oh, and if you plan a seaside garden gravel garden, don’t forget to plant some viper’s bugloss, Echium vulgare, which is a magnet for bees and a wonderful shade of blue. Known as ‘the flower of twilight’ they glow brighter as the light fades. You’ll see them growing happily down on the beach in naturally well-drained and poor soil.