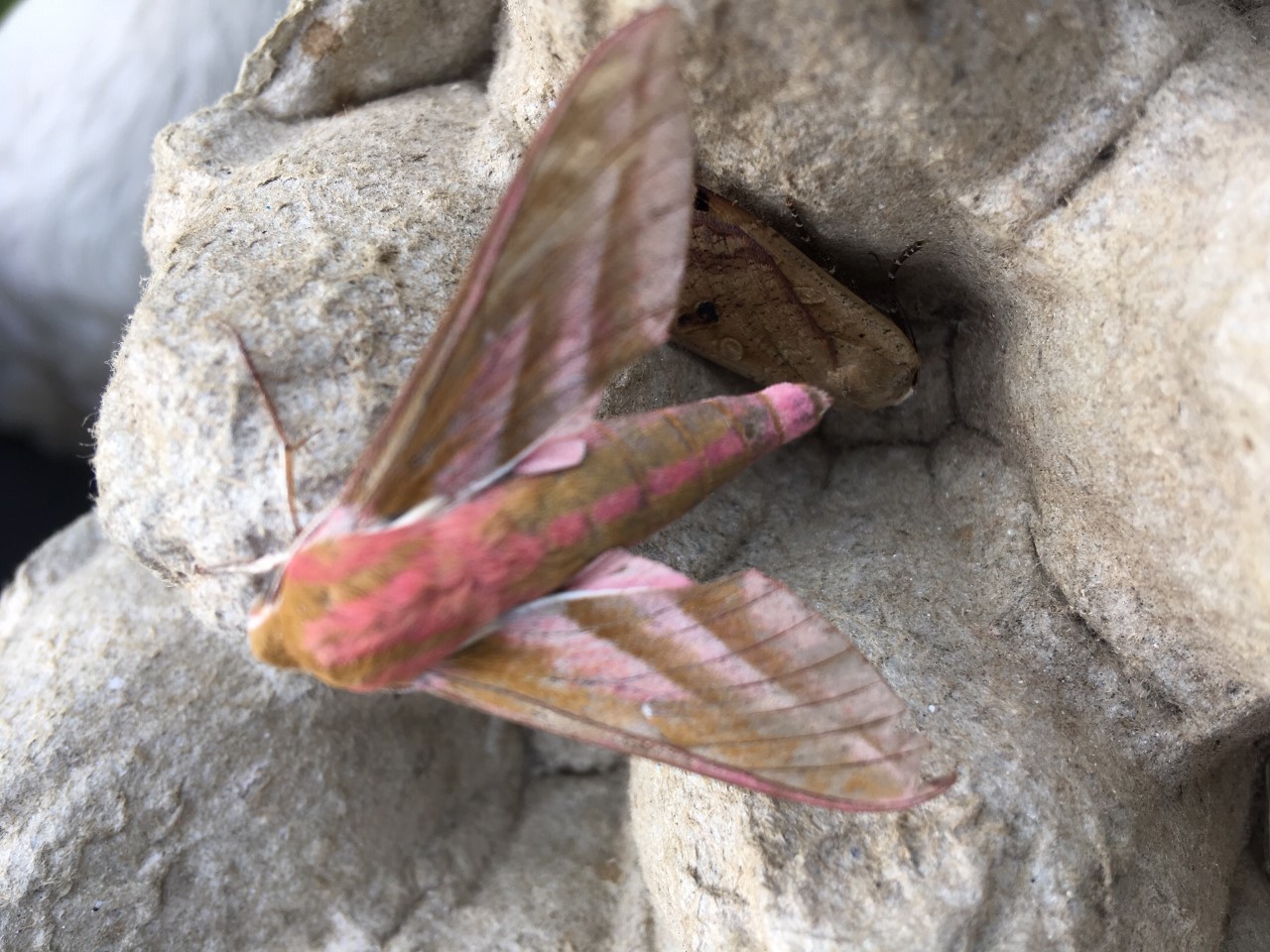 Sue Whigham goes in search of the lesser-seen members of the Lepidoptera order of moths.

I know that many of us, no, all of us, when we think of moths, have dark thoughts about clothes moths, or at least their larvae, munching through our favourite clothes. I know. I had to replace my bedroom carpet in its entirety a few years ago, as well as a couple of pretty sweaters. Mind you, we do create the perfect environment for them in our warm, centrally heated houses. I bet there were fewer around when we didn’t have radiators and the ice was on the inside of the windows.

But the moths I’m thinking of are gorgeous creatures, such as the Jersey Tiger moth my granddaughter spotted sunning itself on a bit of Brixton graffiti a couple of summers ago. Wow, what a beautiful creature this daytime flier is. It’s interesting to hear that it used to be found just on the south coast, and more specifically in Devon and Hampshire. Now it is happy in London as we discovered. It seems that last year was a bumper year for them – well, in Hackney at least. It’s quite a large, very distinctive creature (52-65mm) with creamy white stripes on its forewings and red/orange or yellow underwings with black spots. You can’t miss it.

And so what would you grow in your garden to encourage this moth. Their hairy caterpillars feed off nettles, dandelions, plantain, ground ivy and bramble. All plants that the ‘tidy’ gardener might be strimming off as we speak. The adult moth can be seen feeding off buddleias and borage in the late summer months, as well as plants like Eupatorium cannabinum, or hemp agrimony, an excellent late season border plant with its clusters of pink flowers. There are lovely, particularly decorative forms of this eupatorium, including statuesque Eupatorium maculatum Atropurpureum which has the darkest of flowers and purplish stems.

Moths are in the same insect order (Lepidoptera) as butterflies and in fact make up 96 per cent of the group. There are approximately 2,500 species of moth in the UK and many of them have very specific caterpillar food plants. European native plants species like hawthorn are great attractants for moths and it’s always with a sinking feeling that I see new builds being planted up with fast growing species, such as laurel, rather than a good old native hedge. And like other pollinators, moths do a valuable job of pollinating both wild flowers, garden flowers and crops, as well as providing a vital food source for bats. Many moth pollinated plants have blooms which have evolved specifically to provide nectar in return for which the moths cross pollinate the flowers.

Most ‘moth flowers’ tend to be either white or at least pale in colour so that the moths can spot them as dusk approaches.These would include highly scented flowers such as evening primrose (Oenothera) and tobacco plants (Nicotiana). Some of them have flowers with long tubes which exclude insects with shorter tongues! Wild honeysuckle, for instance, has a particularly long tube which excludes smaller insects and is tailor made for larger moths. Silenes or campions are particularly attractive to moths. Night scented catchfly, Silene noctiflora, has pale pink flowers and is worth looking out for if you want to encourage moths to your garden or meadow. They are a late summer flowerer and look good in a border but would be growing more naturally with knapweeds, field scabious, meadow cranesbill and musk mallow.

Three years after the Kent Wildlife Trust provided us with, and helped sow, some yellow rattle, otherwise known as the ‘meadow maker’ for its ability to parasitize the grasses and weaken their growth, several native species have miraculously appeared this year, amongst them scabious, betony and musk mallow. The latter’s musky scent is particularly attractive to night flying insects and its open pink flowers are very recognisable flowering as they do on wasteland and field edges.

We had a local moth expert along in July, the best month for moths by the way, and he set up a moth trap in the middle of the lawn. We went out at about 10.30pm just to see that it was still there! However, the connection to the electricity must have come loose as there was no sign of light and so the next half an hour was spent out in the dark trying out old leads dug out from the garage. Note to self: clear garage out. But it was worth it as when Bernard came back at 6.30am the following morning, he opened up the trap and we studiously inspected his night time tally despite being a little bleary eyed. We had 51 species in there, apparently not that high a count but it was our first go. It was so exciting to learn a little about these fascinating and usually pretty invisible creatures and to be able to inspect them so closely. And their names: Thistle Ermine, Beautiful Plume, Drinker, Red Twin Spot Carpet, Pebble Prominent, Nut-tree Tussock and so on.

Three stand out moths for their drama as well as their delicacy were the Buff-tip, which looks exactly like a short piece of birch twig, a perfectly developed defence mechanism to deflect predators; the Elephant Hawkmoth, a large and lovely pink and olive moth whose caterpillar resembles an elephant’s trunk, and the Poplar Hawkmoth. We had two of these.

The Poplar Hawkmoth is apparently the most common of the hawkmoths in the UK and its appearance is certainly arresting as it has wingspan of up to 10cm and when it is resting it holds its hindwings above its forewings making for an interesting shape.

For more information on moths and butterflies, contact butterfly-conservation.org
Butterfly Conservation is a charity that ‘uses its research to provide advice on how to conserve and restore butterfly and moth habitats’. 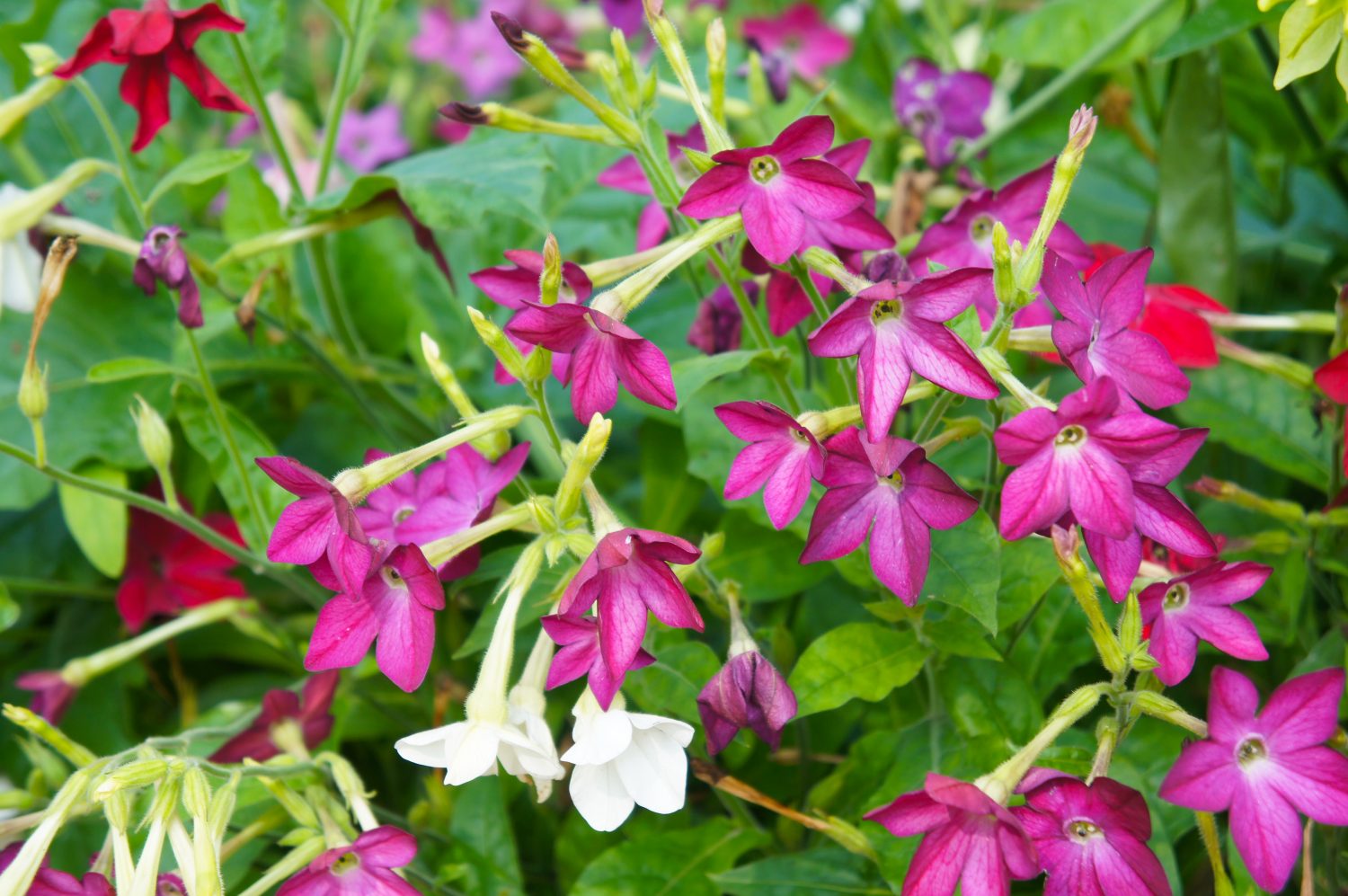 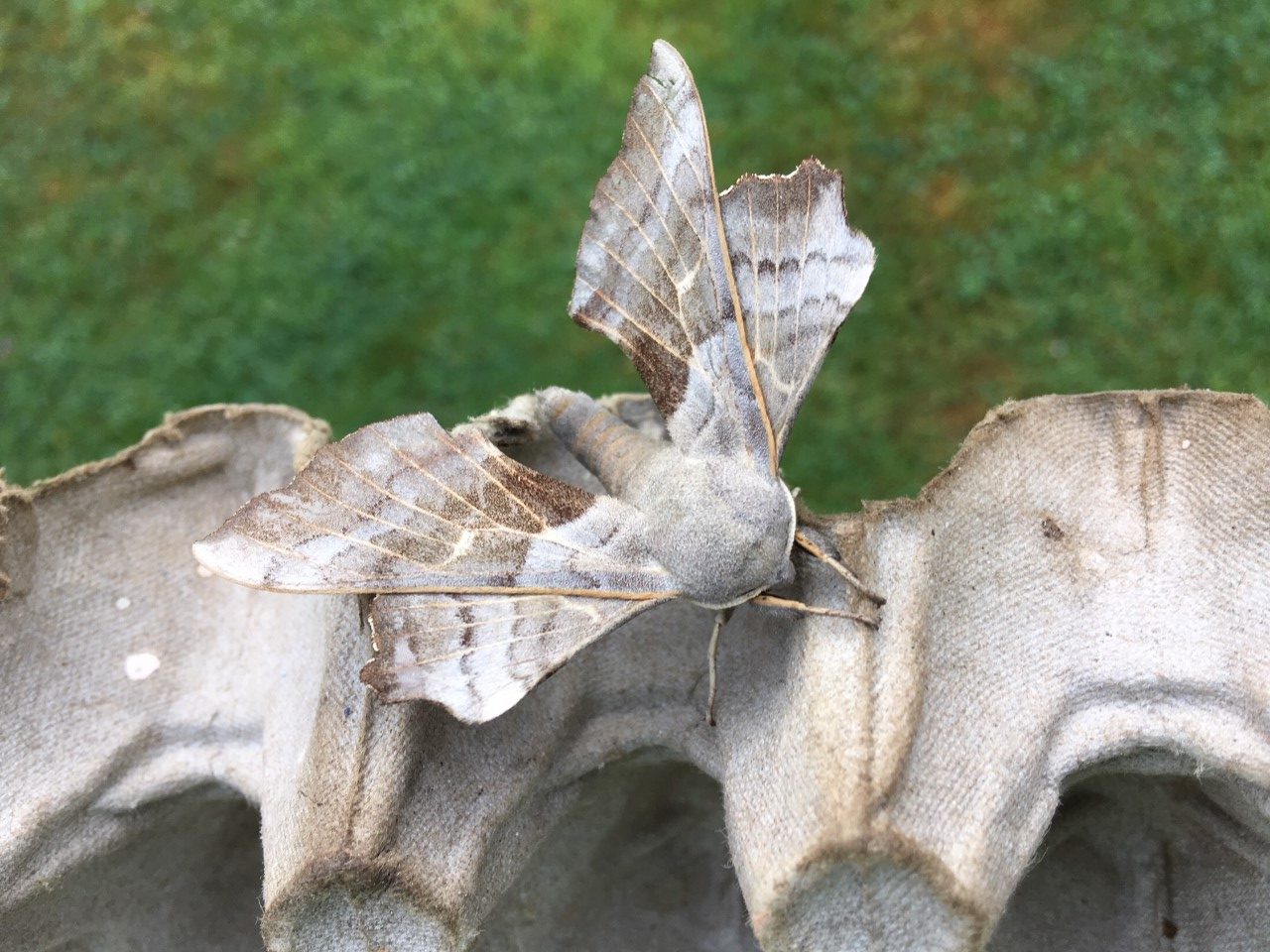 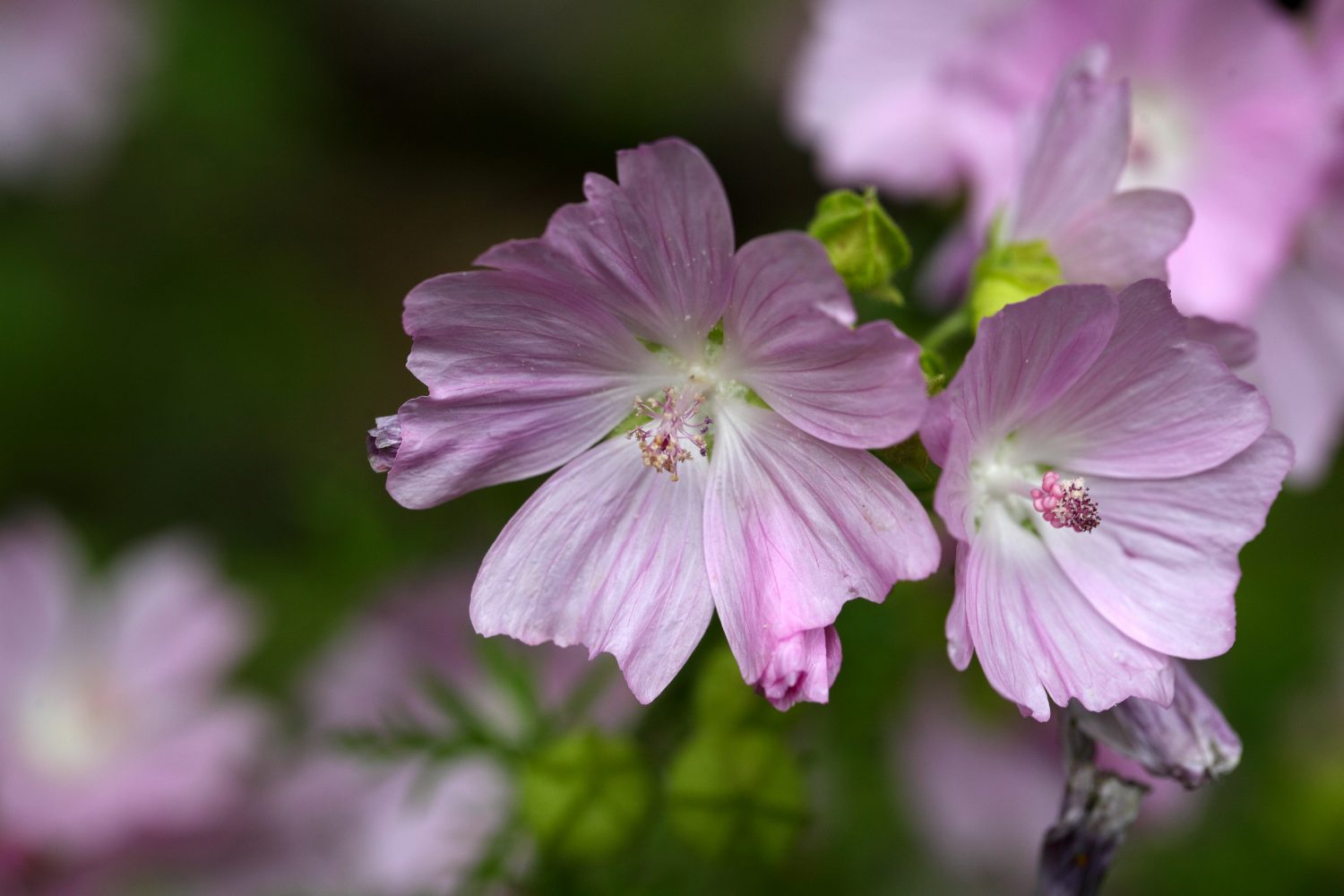 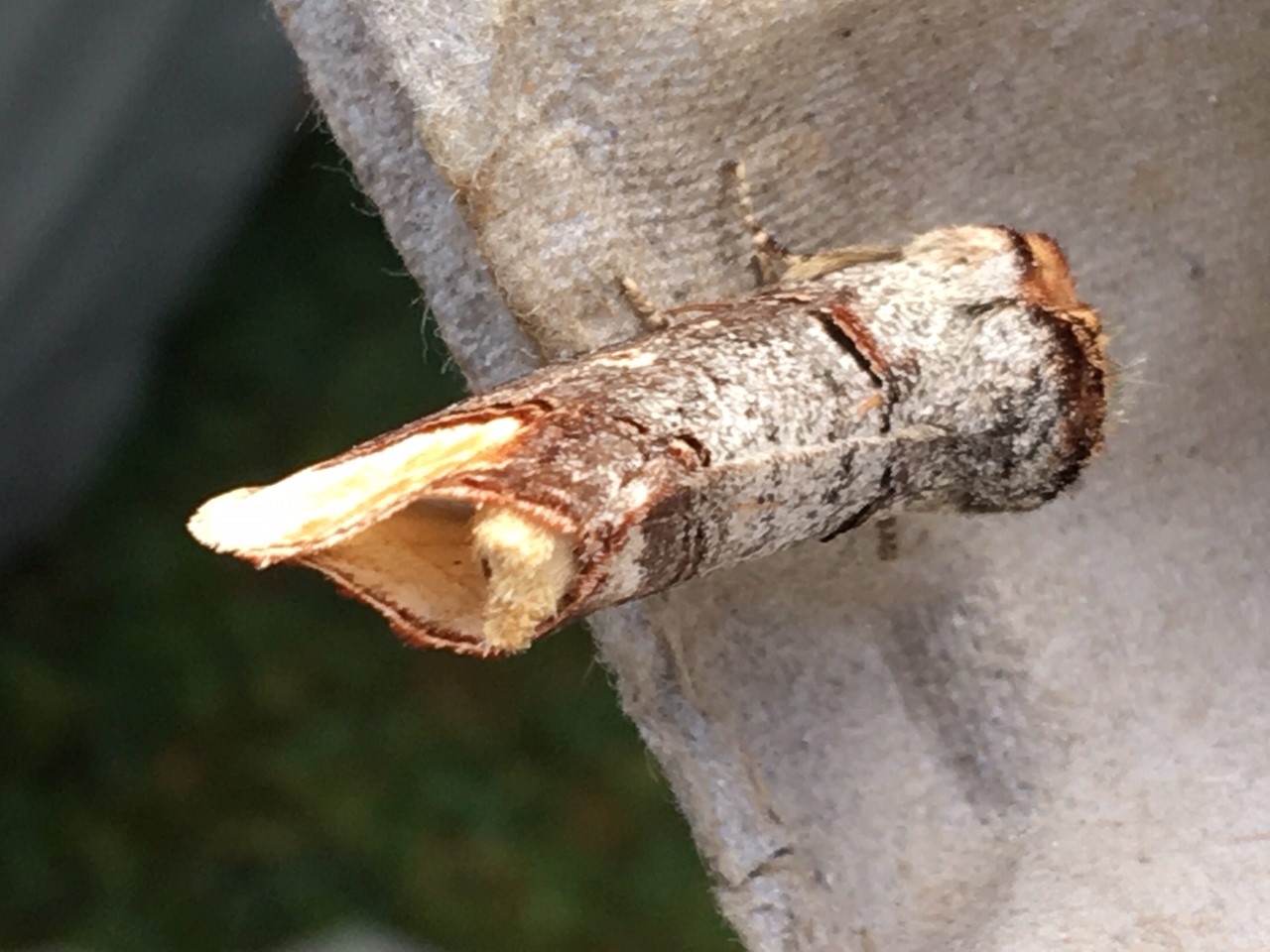