The Makings of a Garden 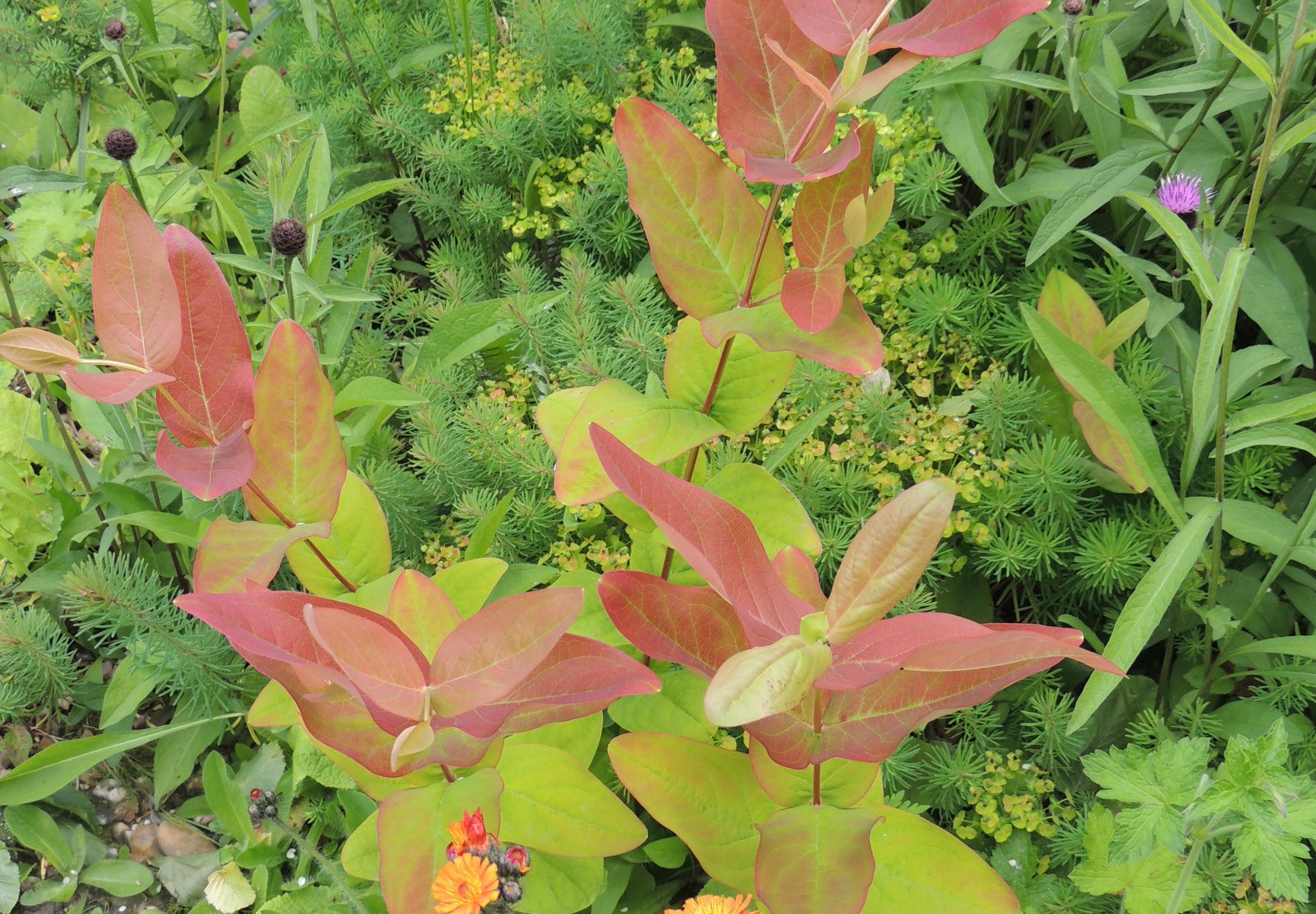 It was 1996 when we first saw the garden, and it was love at first sight. There was a paddock for our donkeys and an orchard behind the house with old lichen covered apple trees. And many of them are still here, looking a little elderly and some of which have become climbing frames for roses. We’re eternally grateful to Miss Richards who planted the orchard in 1952 and who left us a now very faded hand written plan of her trees. What wonderful varieties she sourced. A row of Peasgood’s Nonsuch is still standing as well as the old Yorkshire variety, Ribston Pippin, grown since the 18th Century, and one of my favourites, the robust and delicious cooker, M. ‘Arthur Turner’, still laden with fruit every autumn.

We’re trying to remember what we did first apart from taking down some of the hurdles around the orchard which housed a few pet sheep here and there and rather foolishly buying a few tiny grass and ghost carp to control the water lilies that had become triffid like in the dew pond to the east of the house.

We think it must have been some of the climbing and rambling roses that went in first. One mistake was to plant a couple of climbers up two of the Peasgood’s Nonsuch and whilst they are still very much there, their nature doesn’t really suit being trained up trees. We didn’t really know then that ramblers are so much better suited for the job whilst climbers have a rather more complicated pruning regime which is so difficult to carry out when they are clambering around in their host’s branches.

We’d been reading Robin Lane Fox’s book, Better Gardening, which we think might have been the only gardening book we had then. So taking his advice and reading what he said about Rosa ‘Blairii No. 2’ we started with that, seduced by his description of a rose whose petals are so ‘tightly packed that the scent, too, is doubled, like the fruit of a sweet white German wine’. And it is true except that much of the bloom is now too high to do anything but admire from ground level.

Rosa ‘Paul Transon’ was another early arrival and we can’t recommend it more. We’d worked out by then that a rambler was more suitable for the trees so this went in. It’s a repeat flowerer, a rich salmon with ‘coppery overtones’ but the best thing about it is its unusual and rich scent.

And then there were ramblers like Rosa ‘Phyllis Bide’ first spotted whilst on a bus driving through Odiham, R. ‘Rambling Rector’, too vigorous for its host, but showy, and the delicate R. ‘Cecile Brunner’ which is just coming out now and which uses a rather decrepit old prunus as a climbing frame, the soft pink of the rose combining with the purple foliage. Later additions include R. ‘Wedding Day’ and two less vigorous roses, R. ‘Apple Blossom’ and R. ‘Open Arms’, both charming. Then Peter Beales sent us a few shrub roses with delectable names and these went in between the apple trees. R. ‘Madame Hardy’ is lovely; white with a green eye but alas, no scent.

A few trees arrived, perhaps two or three a year, from Robert Vernon’s Bluebell Nursery. These were bought as small plants but soon grew on and we had few fatalities. I think it is a good idea to start small if you feel you have the time to wait. The trunk of the beautiful birch, B. ermanii split and hornets feasted on the sap. It had to be bandaged with the remains of an old sheet but made a remarkable recovery. One of the slowest trees to establish, a beautiful lime introduced by Ernest Wilson from the wilds of China, Tilia henryana, is now romping away and maybe one day soon it will start to produce its autumn flowers. Look out for this one. It has huge ovate leaves which are toothed and so very striking.

Clematis were planted here and there. Some have thrived but in this last dry spell, two or three seem to have disappeared. The soft pink C. ‘Duchess of Albany’ has gone in this year with the idea of it providing late summer interest through a grey leaved Elaeagnus ‘Quicksilver’. I love the late flowering clematis. Their bell-like flowers appear when you are least expecting them. The house and sheds are smothered with C. montana ‘Wilsonii’. Many of the plants have self seeded and combined with a Persian ivy which arrived as a cutting from a friend’s plant in Benenden. C. ‘Wilsonii’ is a good doer and its fragrant white flowers come a little later than many of the other montanas.

Gravel in the garden has proved to be a fantastic growing medium as there is always something new popping up and there are now interesting combinations of self sown hypericums and the prolific burnt orange flowers of ‘Fox and Cubs’ which came from a Winchelsea garden open under the National Garden Scheme and a low growing Euphorbia cyparissias ‘Fens Ruby’.

Borders were dug and filled with a mixture of shrubs and perennials. One border proved to be too ambitious and the soil baked hard in the summer. As its nutritional value didn’t seem to improve despite the addition of copious amounts of compost and grit, we’ve abandoned ship and a third of it has now been sown with a wild flower and grass mix from Emorsgate Seeds. It’s a huge success this year although a few less ox eye daisies in the mix would have been better. What survivors these are. I have never known anything to proliferate quite as much! The other parts of the border are waiting for attention and meanwhile the teasels and purple fennel have taken up residence and look very happy too.

It took years to take out a huge and exceedingly geriatric privet hedge from round the little vegetable patch, apparently highly prolific in our predecessors’ day. Getting rid of this and replacing it with a picket fence now planted up with a cultivated blackberry, boysenberries and that really decorative Japanese Rubus phoenicolasius is a great improvement and it’s much more fun to see a few dahlias and salvias growing together through the kitchen window rather than the hedge.

A giant purple fennel has appeared and reaches great heights by the end of the season too and provides a good backdrop to Salvia ‘Amistad’ and that lovely variety, Salvia confertiflora. Both of these need to be lifted at the end of the year and a few cuttings taken but they strike easily and are worth the effort. S. ‘Amistad’ starts flowering in July – earlier if it has been kept in a greenhouse – and its dark purple flowers are still going in November.

And so each year things change – a little. Some plants start to outgrow their space and have to be hard pruned; the apples need attention each winter and gradually need replacing. Moss seems to take over the lawn but by early June everything is looking rosy. 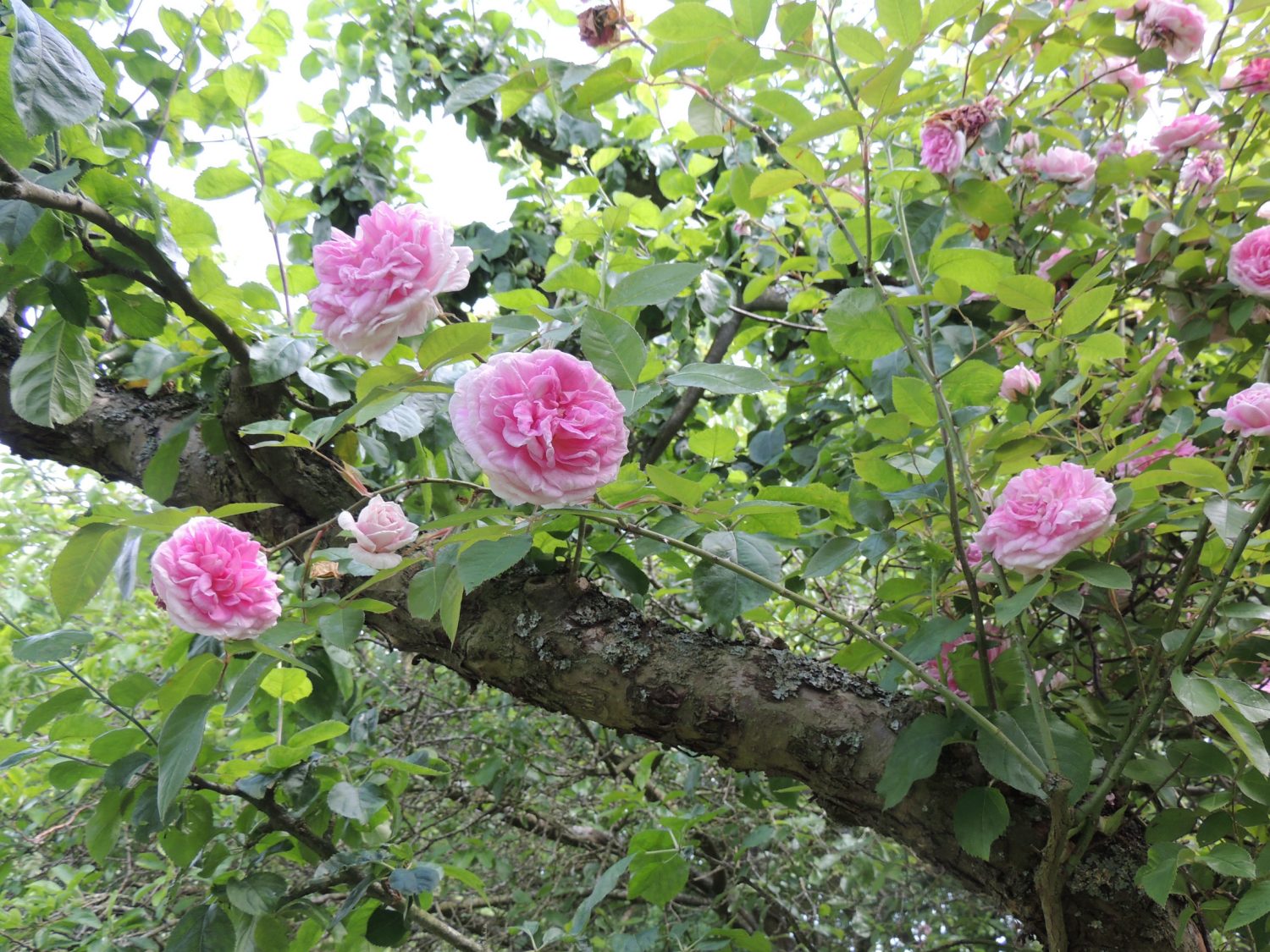 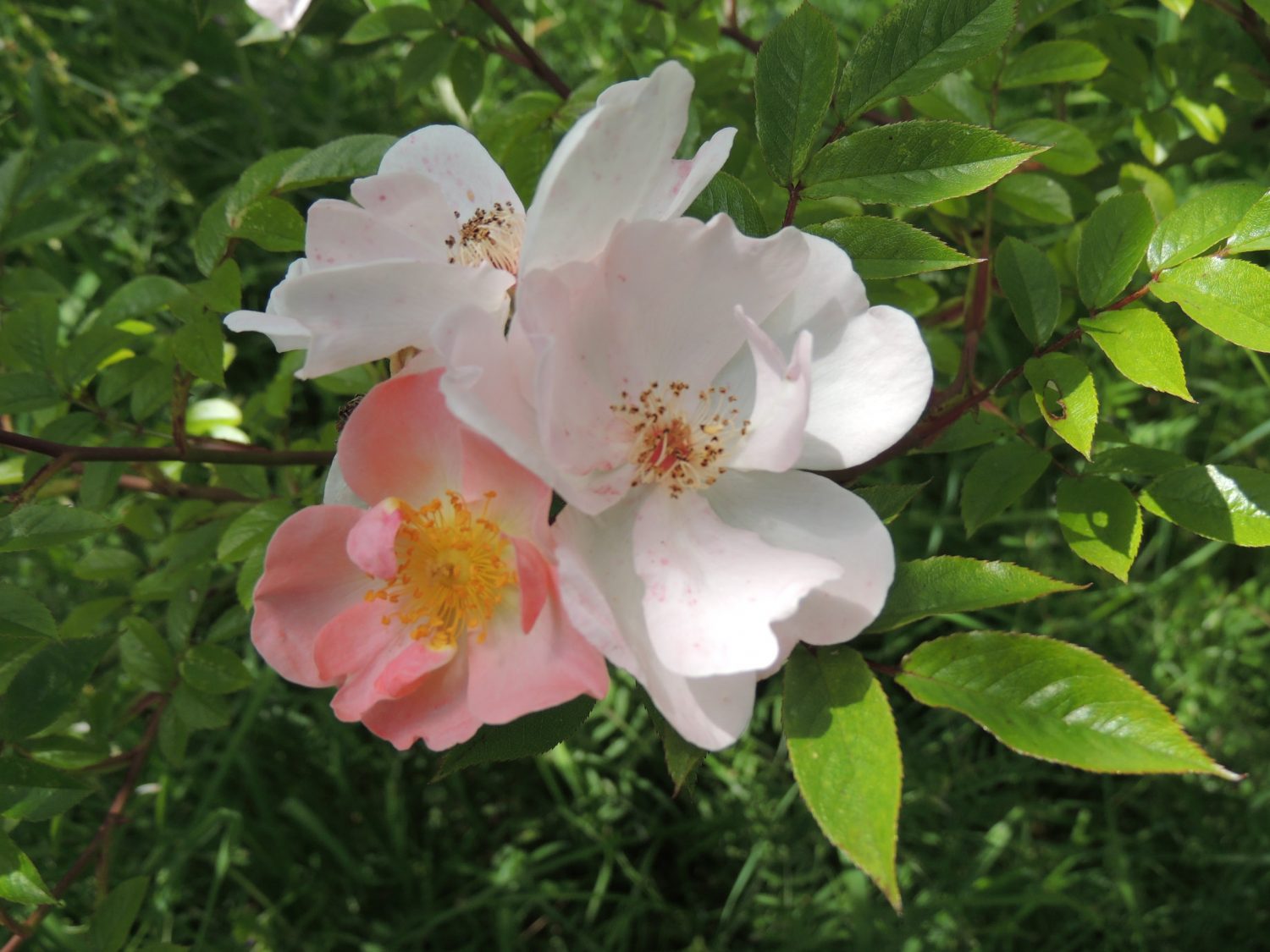