Case Study: Bringing Back the Barn 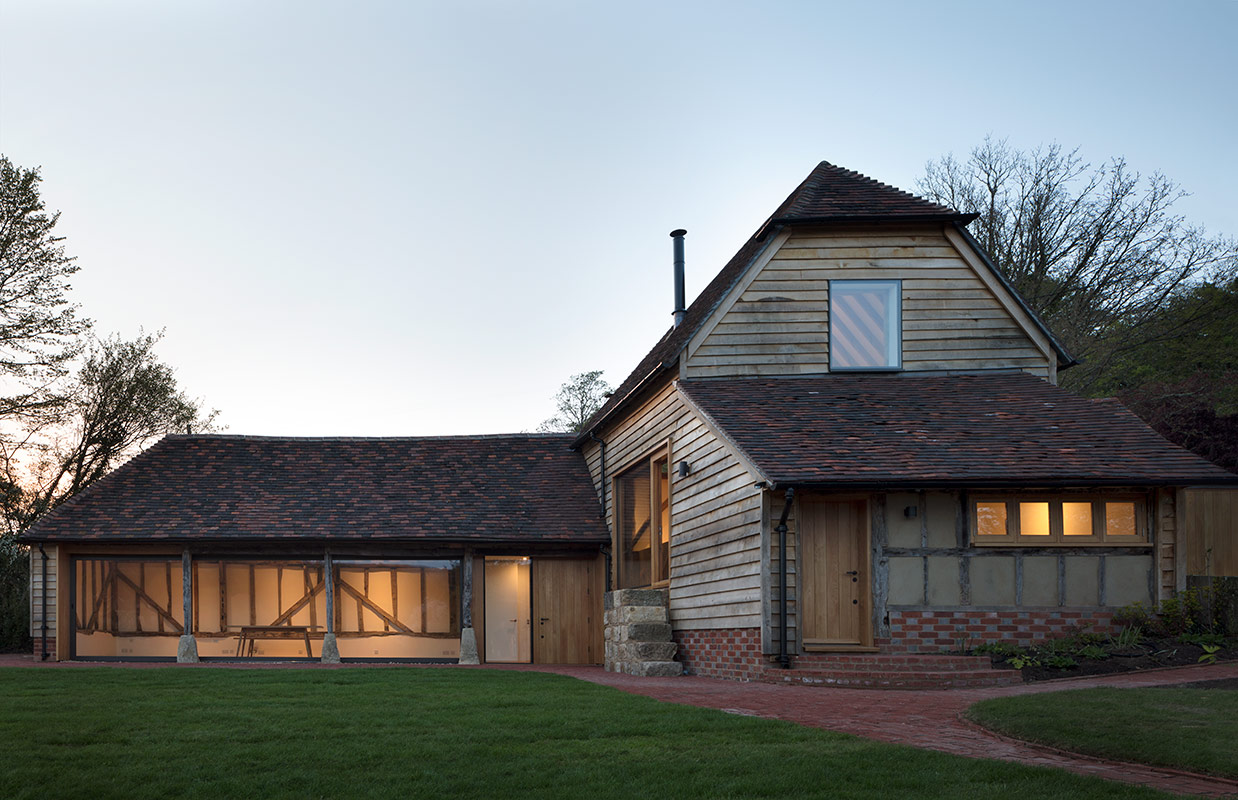 Burwash Barn was a real project right from the offset, it had enormous potential but was obviously going to require lots of work to fulfil it. The idea was to provide additional family accommodation for a Grade II listed 17th century farmhouse in East Sussex. Alongside the main house was a building which was comprised of three divided barns. The clients wanted to convert this outbuilding into a sitting room, studio bedroom and bathroom as well as a garage and outside store, all in a style that complimented the historical nature of the property and honoured the building’s authentic character and features.

Originally built as part of the farm, the agricultural outbuilding that we began with was an uninsulated timber structure with rotten sole plates, damage from water ingress, and roofs in need of repair. We had to meticulously survey and strip back the structures before we started rebuilding. We carefully removed the existing foundations and installed new ones, and used traditional carpentry methods with the tenons pegged, to replace the existing timber with new oak. The buildings had also moved over time, which actually gave them a sense of age and personality which the clients were keen to keep, so the natural undulations within the roof structure were not corrected. They also wanted to keep the original structure of the building visible, so, rather than installing the insulation between the studs and joists, we installed new insulation over the existing structure, exceeding building regulation requirements, and forming a warm roof. The existing rotten oak cladding boards were also removed and replaced with new oak boards to match what was there before. As for the roofs, the main barn roof had been replaced with corrugated sheet and the lower roofs had many damaged Sussex peg tiles. To fix this we mixed reclaimed tiles in with the surviving originals to ensure the roof kept its traditional appearance, and also added bat ‘slots’ for detail.

The original building was divided into three barns that were not interconnected, and one of the key changes we made was to link them all together to allow the buildings to flow into each other. The Wealden District conservation officer allowed a small opening in the wall between the lower barn and the main barn, which was enough for us to install a new stair. The conservation officer was also keen that the building retained its original open elevation, which meant the new sliding glass doors had to be installed behind the original posts and bracketed from the existing structure. The end result is large contemporary glazed sliding doors and windows which really show off the original studio structure while also opening up some enchanting views to the countryside beyond.

Once all the work was done to make the structures sound and habitable, the landscaping was also altered to create a new vehicular entrance to the north of the site, enabling the old track to be subsumed into the field to minimise hard standing surfaces. Meanwhile, inside the outbuilding, the interiors were decked out with modern oak flooring, and oak doors and windows to once again maintain the woodsy tone of an old barn, with flush glazing and a beautiful statement concrete fireplace bringing the whole thing elegantly up to date with gentle touches of contemporary flair.