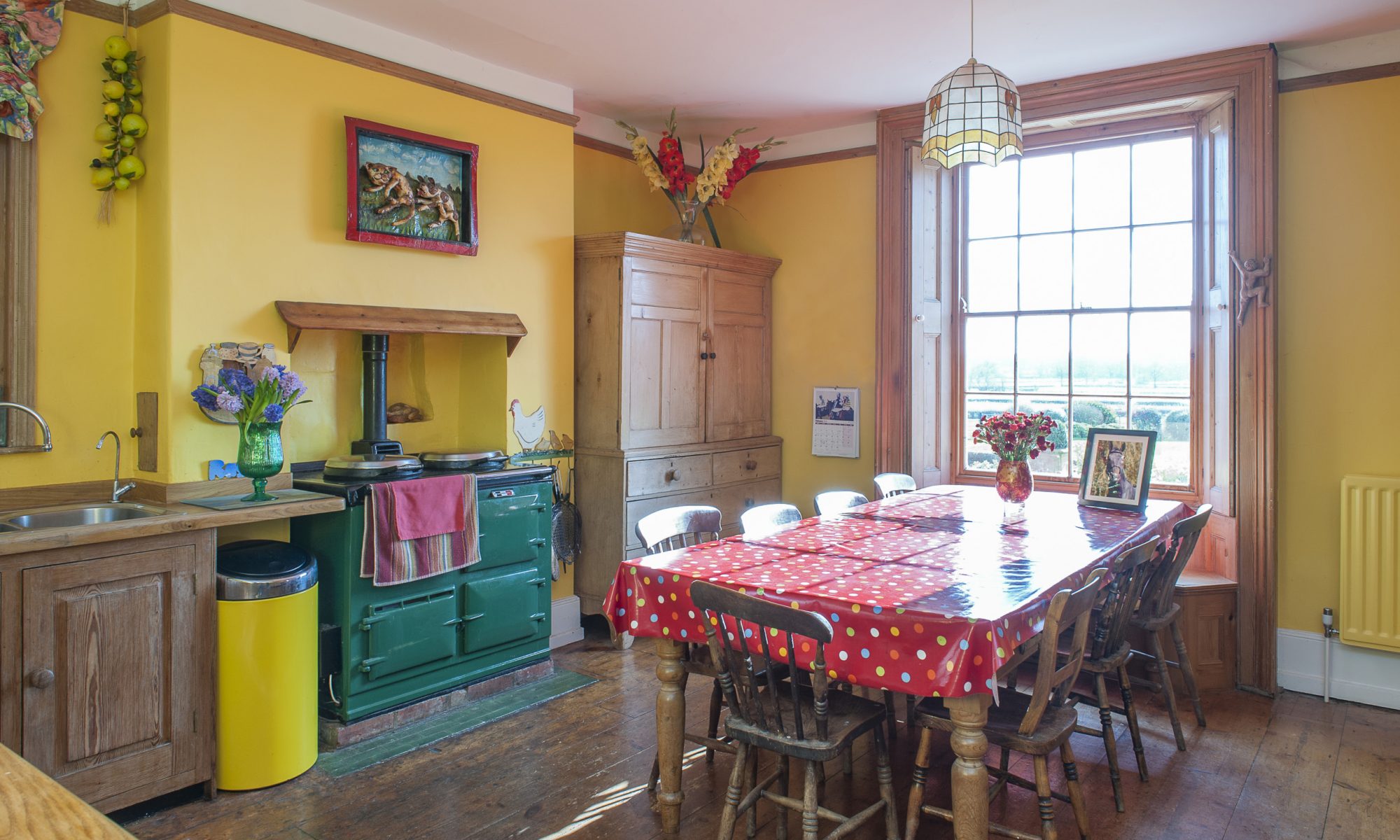 Much is written of the Georgian house – its perfect proportions, its soaring rooms, its windows that allow light to flood into every nook and cranny. However, these eulogies tend to be about grand Georgian town houses or elegant country seats. It’s considerably less common to read praise of equally lovely working Georgian farmhouses, which is exactly what The Farm was once upon a time – a modest three bedroom Georgian home at the heart of a modest Wealden farm.

In 1900, its then owner decided to expand the property to six bedrooms but the design and build is of such quality that you barely see the joins. Louise and Alex bought the farm 30 years ago. They had been living not far away but wanted a larger family home with more land that would also allow Louise to indulge her passion for horses. At the time the couple had a 15 acre smallholding, on which they were self-sufficient, but The Farm had considerably more potential with 150 acres.

When we arrive she’s a little breathless. “Sorry, just been running the Hoover round,” she says. “I’m afraid I’m not very house proud.” Perhaps not, but this is, nonetheless, a house to be seriously proud of.

“When we first saw it, it was divided into run-down flats, pretty dilapidated and needed masses of work,” says Louise, “but it wasn’t difficult to see what it could become and we absolutely fell in love with it.” The couple also knew it would be a long-term project with work progressing as cashflow allowed. Today, however, it has been finished for some years and Louise has now started on a new round of redecoration.

The very first thing that one notices is that Louise is no follower of the white-on-white church which currently has so many devoted disciples and that at The Farm anything that’s distressed is that way because it’s had children kicking the bejabers out of it for a quarter of a century. “I love bright strong colours,” she says. By happy coincidence these reds, blues, greens and yellows are Georgian colours and complement the house perfectly, the generous rooms with their high ceilings rejoicing in shades that would overwhelm less confident spaces.

The kitchen is in traditional country style, Aga holding court surrounded by warm antique pine. Or it would be were it not for a vast papier mâché old lady eating fish and chips in the corner. The work is by Hastings artist Jo Redpath, has been with the family almost as long as they have been at the farm and is still much loved. High over the Aga is another papier mâché piece, this time Mexican, in a glass case and of a cat and dog.

The yellow SMEG matches the walls and by it stands an old pine baker’s table found on a demolition site in London by Alex’s father – who was an architect. On the table is an assortment of family treasures, among them cardboard cut-outs of the family – rather than a ship – in a bottle and a toy made by children from the Mother of Peace ophanage in Zimbabwe which the family supports. On the wall is an impressive clock that once hung in the hall of Burberry’s in London and was part of a collection of clocks also once owned by Alex’s father.

In the deep red and tessellated hall one is greeted by a fierce Thai mask and a massive Roman head from a film set. On the opposite wall is a dark and brooding industrial scene by late Victorian Romanticist Joseph Langsdale Pickering, perhaps best known for his Arcadian landscapes. Two sofas face each other – one also a film prop – while on the wall swim two fat fish in a case alongside a French mirror the couple brought back from France with the children crouching beneath it in the car.

In the hallway that leads down to the conservatory is another great timepiece – a large Act of Parliament clock. Also on the walls are hunting pictures and two portraits of Alex’s grandparents.

In Alex’s study are a host of yachting and driving memorabilia. Alex is a yachtsman and is currently about to embark on the final leg of a trip around the world. This does not mean, however, that Louise is a sailing widow – she has been joining him by air in the more interesting places and he has been returning to the farm throughout the four-year trip.

So onward down past a stuffed salmon the size of Flipper that once graced Alex’s London boardroom and into a large conservatory that looks out over one of the couple’s two beautiful large ponds and has summer dinner party written all over it. The first thing that catches one’s eye are two big and beautifully-painted two-foot high Chinese vases. “They were left over from an auction,” says Louise. “The reason was that they had been badly broken and then repaired. I paid £25 for the pair.” The repairs are virtually undetectable and Louise should be serving 10 years for daylight robbery.

Centrepiece of the conservatory is a great table. “A friend works at the Bank of Siena and this was their old boardroom table,” says Louise. At either end of the room are large fun terracotta pots that Louise has painted herself, two boasting lovely crassulas, plants that flower only after they are 10 years old. “The larger was Alex’s mother’s and the second is a cutting we took from it and it’s now flowering for the first time.”

In the dining room one is immediately struck by a wall that would have had Georgians gasping. The whole length is a wonderful swan mural, the trees populated by birds added by Louise and her children. “What I’d now really like to do is to have birds flying across the walls all over the house – owls, swallows, hawks – anything on the wing.” It’s a great idea and would work perfectly in this particular house. “The only thing is that I haven’t yet found the right wildlife artist to do it.”

The newly decorated drawing room, with its stunning views out over the terrace and countryside, is something the Georgians would certainly have recognised and very much approved of. The walls are a bold, strong yellow and wallpapered rather than Farrow & Ball-ed. Most striking, however, are the two stunning deep red velvet sofas. Not only are they ideal for the room but Louise picked them up on eBay for a truly absurd £200.

There are, of course, one or two touches that the Georgians might have found just a little odd. For a start, there are no curtains, items in which they took particular pride. “Originally I had planned beautiful curtains with swags and tails but making up my mind about colour and material took a while and I began to get used to the window without them,” she says. “Ultimately, I began to question whether we needed curtains at all and decided we probably didn’t.”

Bonzer decision. The window and the view is in itself a joy and with a dash of colour provided by the scatter cushions on the window seat, the whole curtainless concept works perfectly. Another touch not found in every Georgian drawing room is a glass case, inhabited by a stuffed Chinese pheasant, which now serves as a side table. Louise found it at a Philippa Deeley auction at Bodiam.

Over the fireplace is a Louis Philippe mirror and, flanking it, a portrait of Alex’s great-grandfather nicely complemented by a bronze bust of his father on a cabinet by the door. Completing the family theme are a lovely oil of another, alas unidentified, ancestor on one side of the window and an equally lovely picture of the couple’s daughter on the other.

The music room was once the old servants’ quarters and high on the wall above a baby grand is still the old servants’ bell system. The wall not covered by old school photographs has been decorated by the whole family with a mural of fairies and wildlife.

And so upstairs and past a large collection of paintings of Louise’s great passion, horses. “Horses are fascinating animals,” she says. “I love the way they move and how the artists here have caught that. Most of all, of course, I love working with and training them, particularly problem horses.

The master bedroom shares the sitting room’s lovely view and here Louise chose a softer yellow for her wallpaper. Over the pine bed is a large gold Japanese fan the couple brought back from a yacht rally in Japan and, on the floor, a Turkish rug, another trophy from their travels. On the pine chest of drawers stands a Louis Philippe mirror.

At the foot of the bed is a delicate Victorian sofa that Louise plans to reupholster herself having learned the skill at classes run by Biddenden-based Alison Scott. On the walls are a nude of Louise by a friend and a Michelangelo print. In front of the fireplace is a wonderful and very elegant model yacht that Alex’s father used to race on the pond at Clapham Common as a member of the famed Clapham Model Yacht Club.

At the end of the hall is a warm and welcoming guest suite with an early Victorian bed and superb gold satin counterpane, the latter bought, incredibly, for £20 from a charity shop. A red Indian rug set against a blue carpet complements the strong red of the walls. In a second guest room stands a French bed with pleasing walnut panelling and by it, at present, is a huge collection of fabric from around the world that Louise plans to turn into dresses.

Not only is The Farm an excellent example of how a modest Georgian farmhouse has evolved into a spacious and elegant family home – it is also an absorbing place, a place of endless fascination with something new to catch one’s eye and feed one’s imagination at every turn. It is, quite simply, a delight to visit. 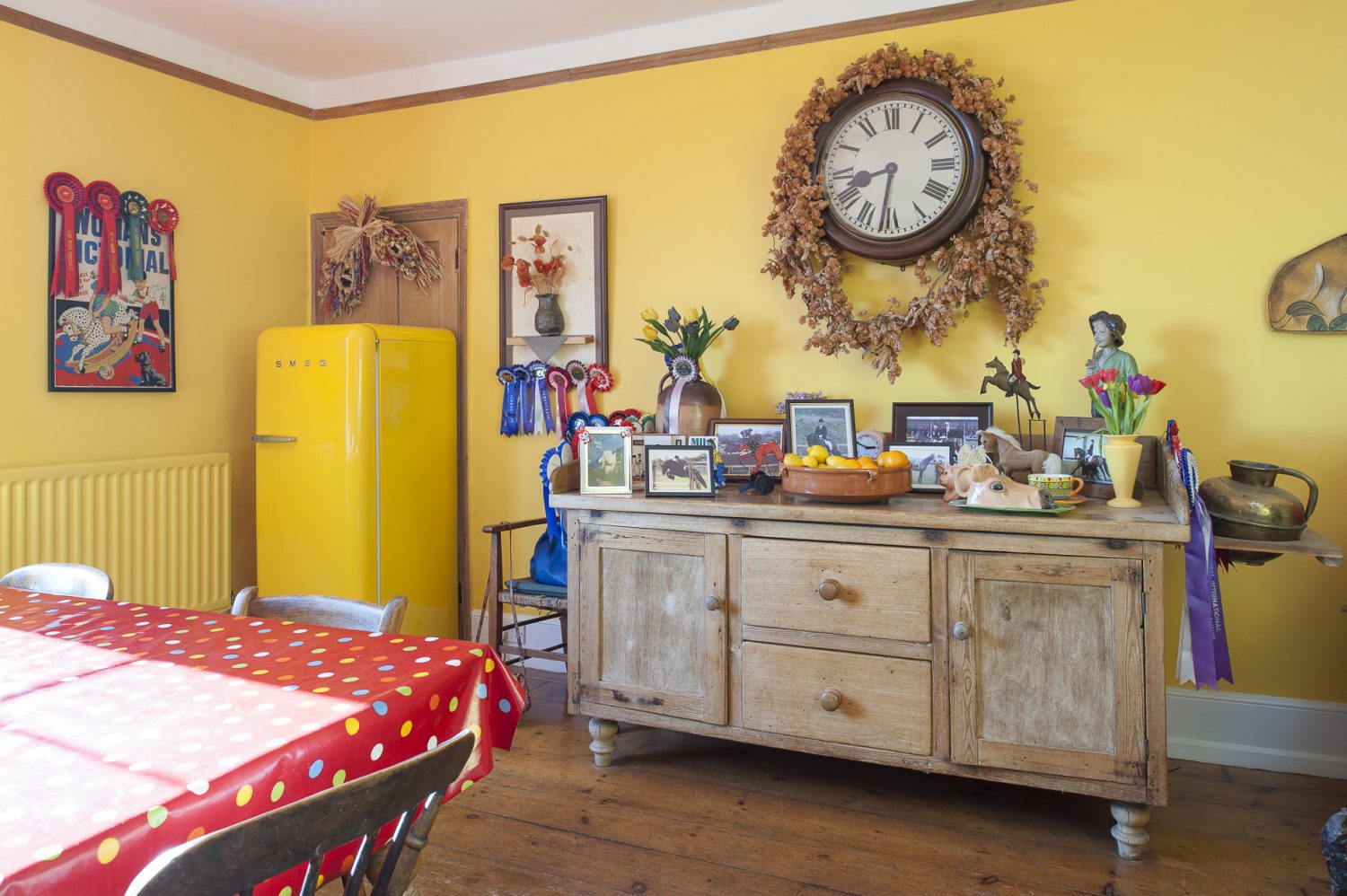 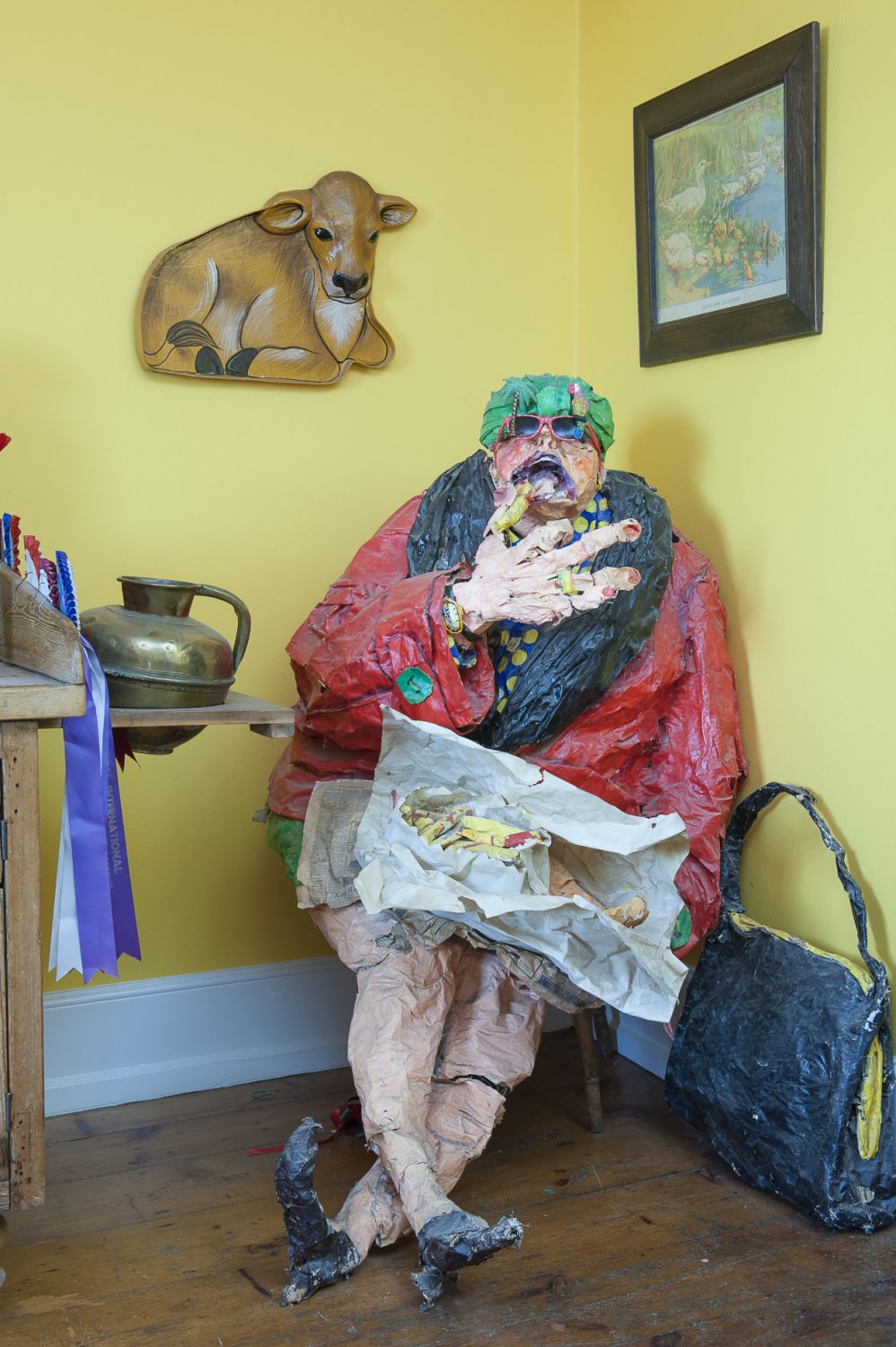 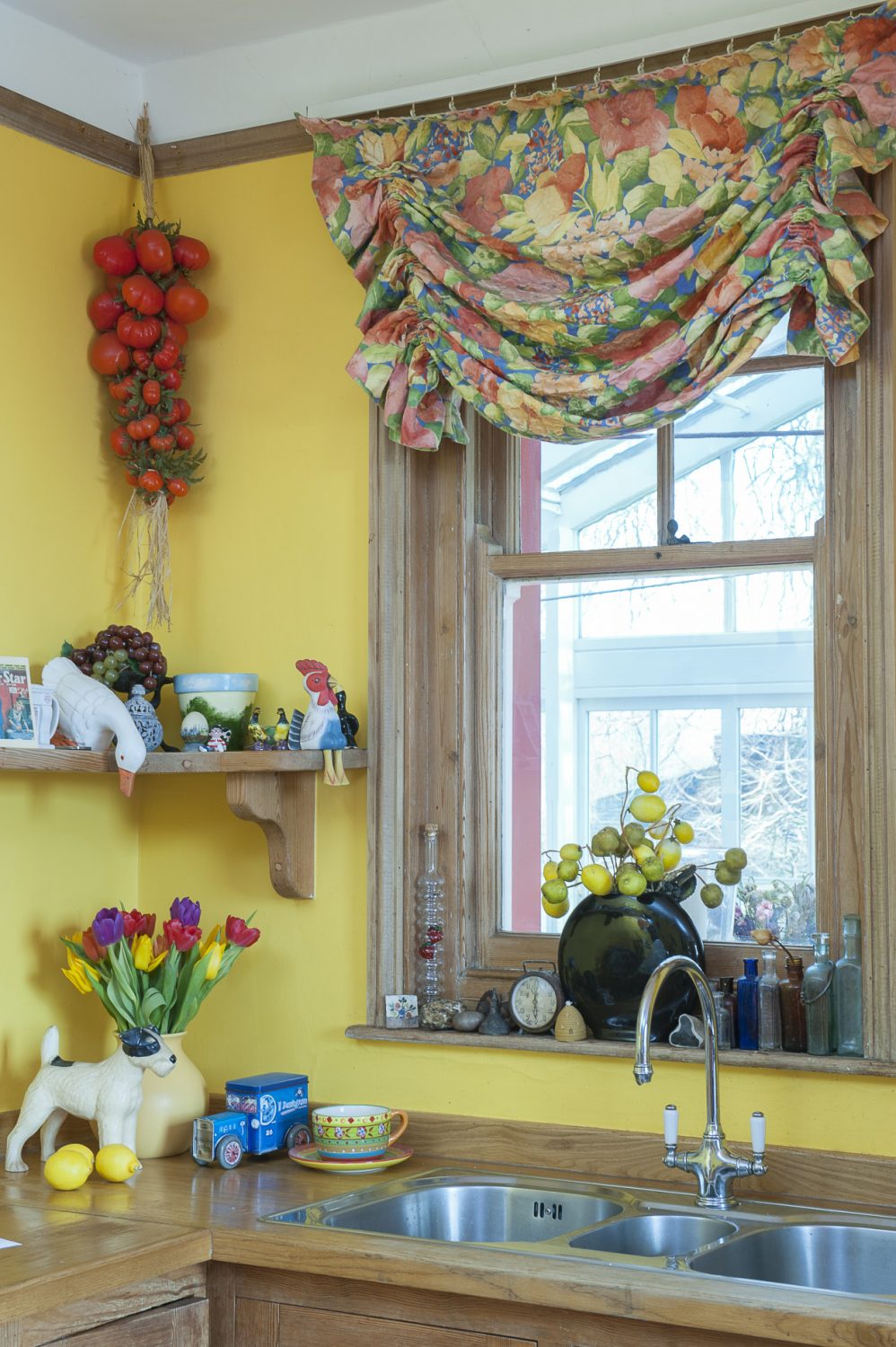 A kitchen window looks out into the bright conservatory 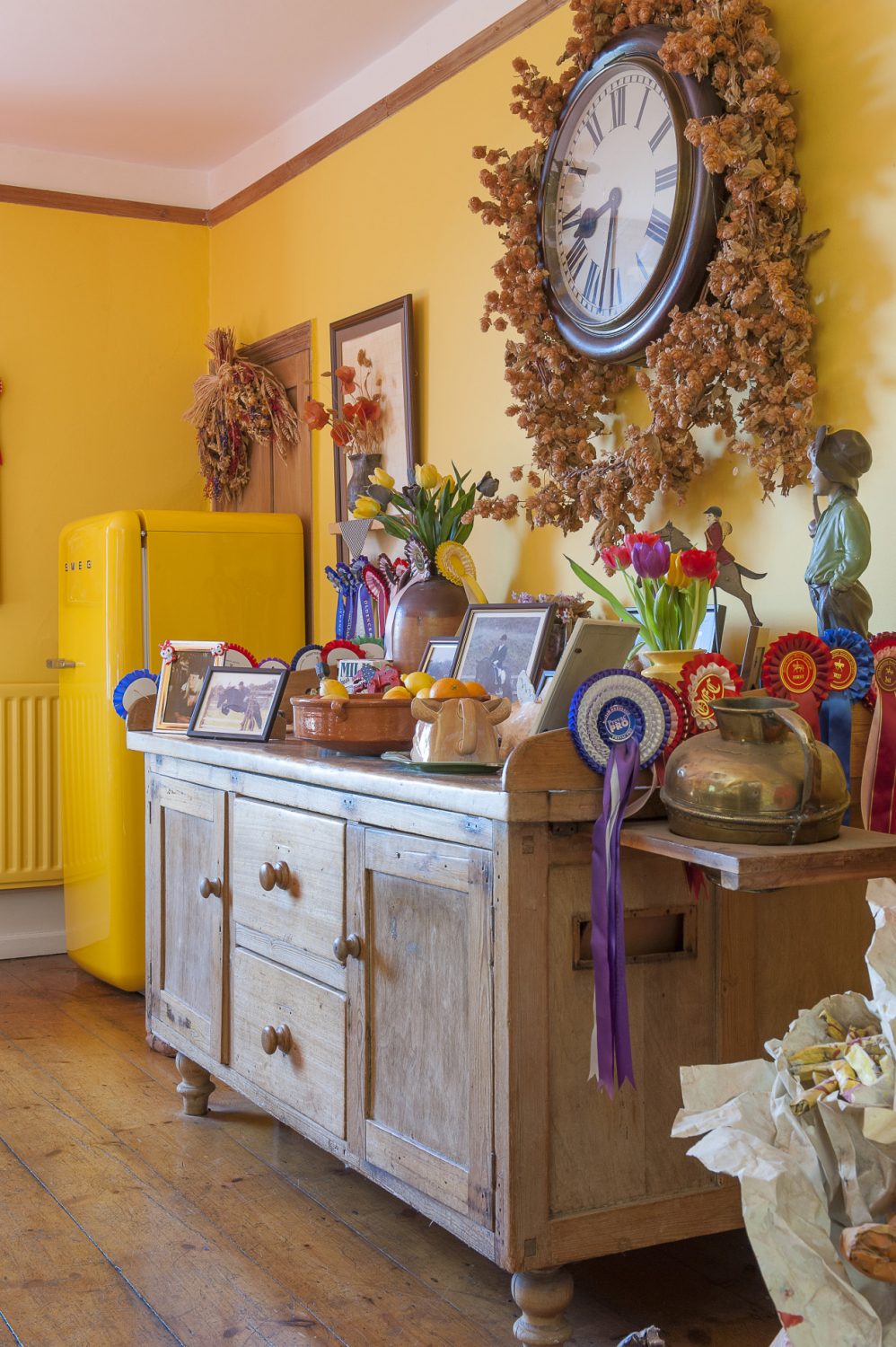 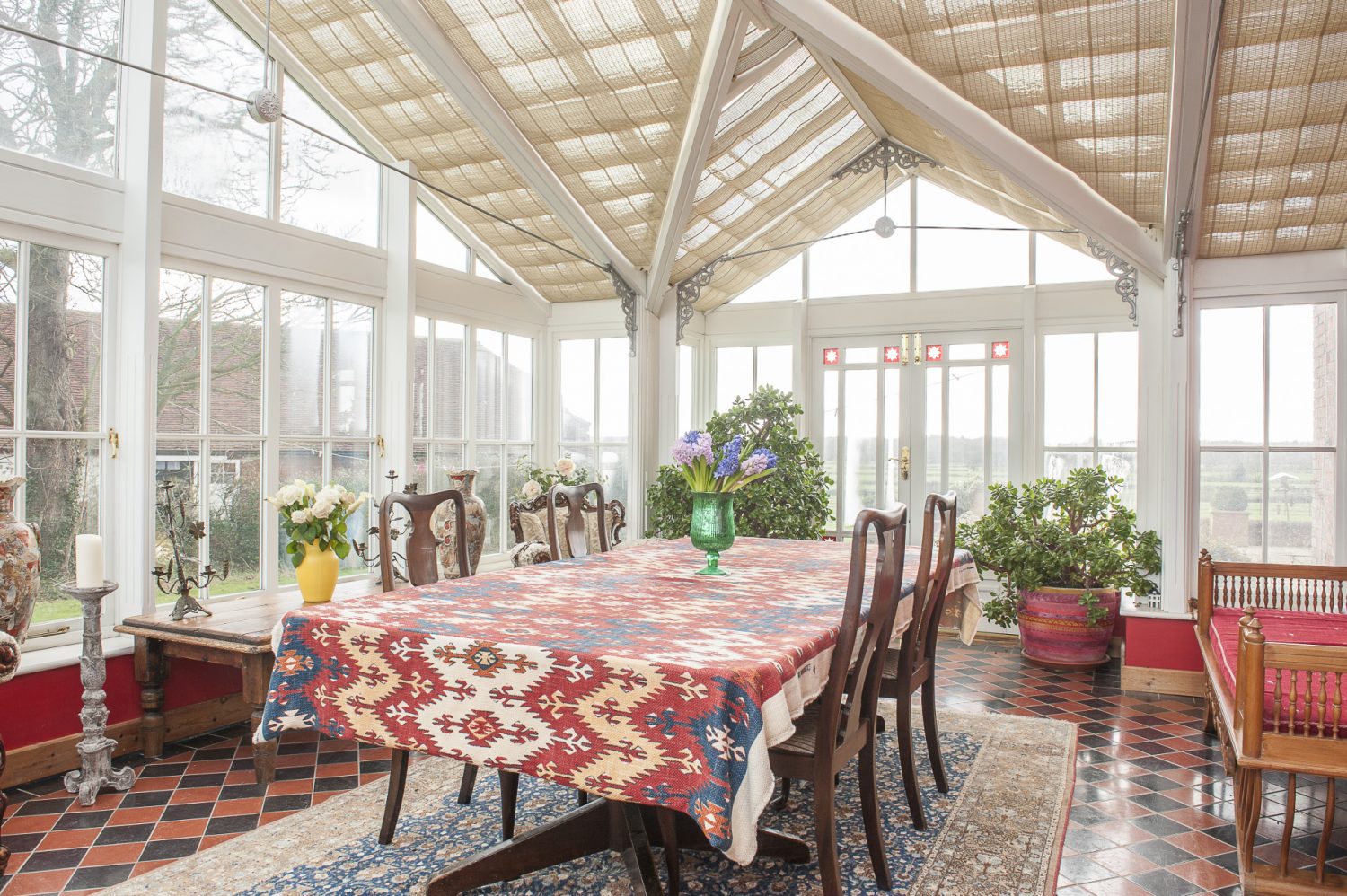 The large conservatory looks out over one of the couple’s two beautiful large ponds. Centrepiece of the room is a great table that previously belonged to the Bank of Siena 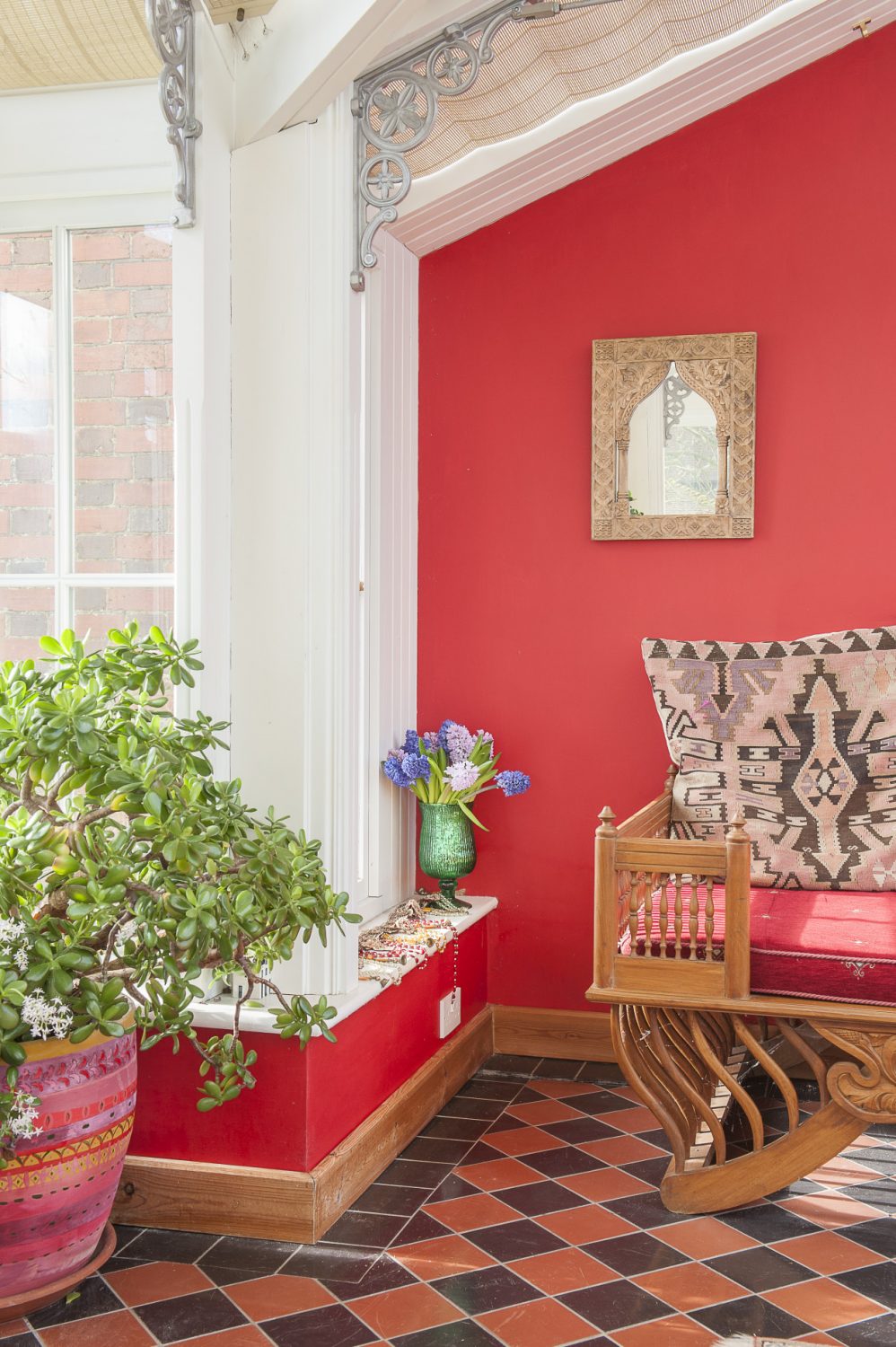 At either end of the room are large colourful terracotta pots that Louise has painted, home to crassulas, plants that flower only after they are 10 years old 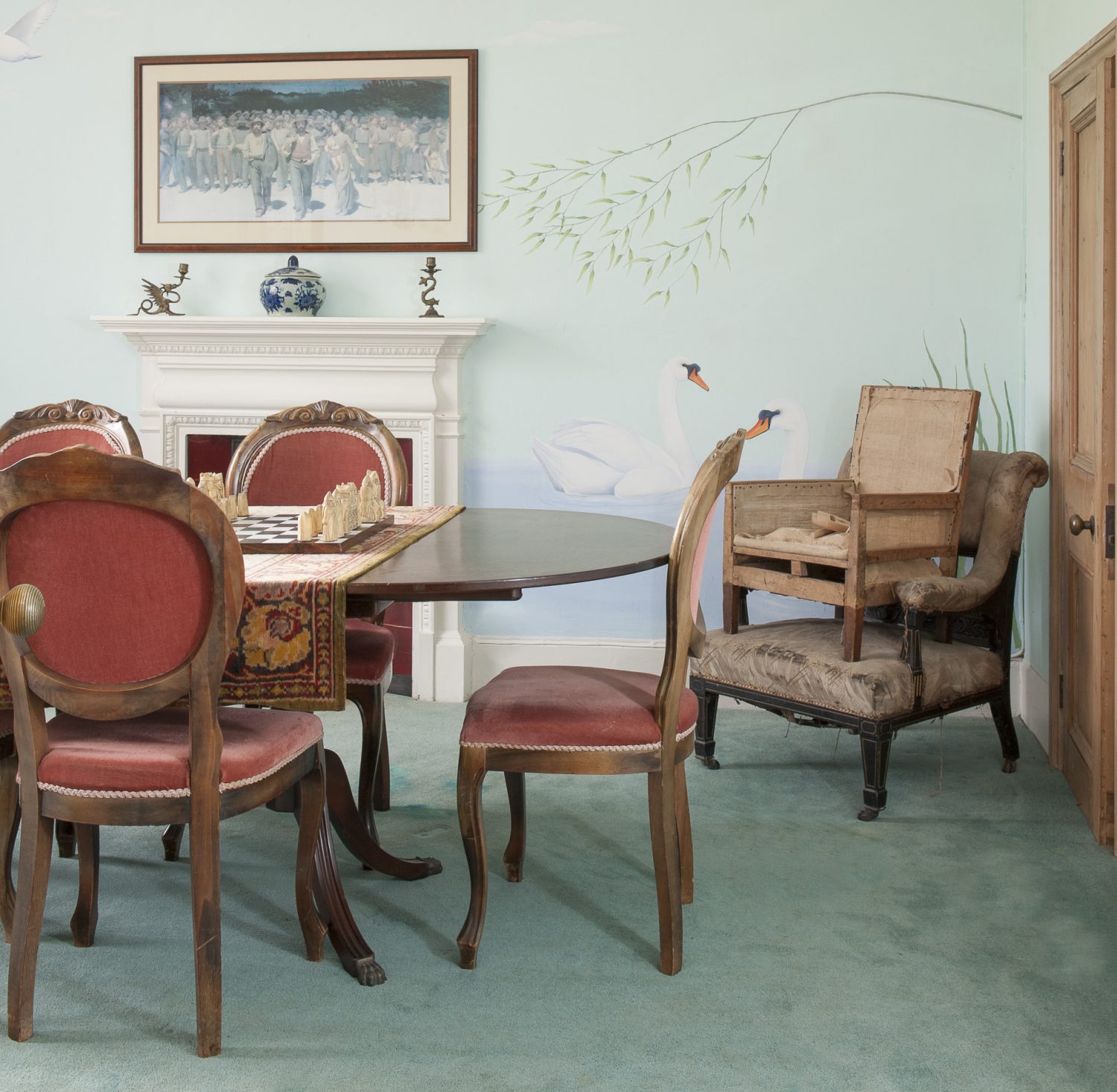 The whole length of one dining room wall is devoted to a wonderful swan mural, the trees populated by birds added by Louise and her children. “What I’d now really like to do is to have birds flying across the walls all over the house – owls, swallows, hawks – anything on the wing,” she says 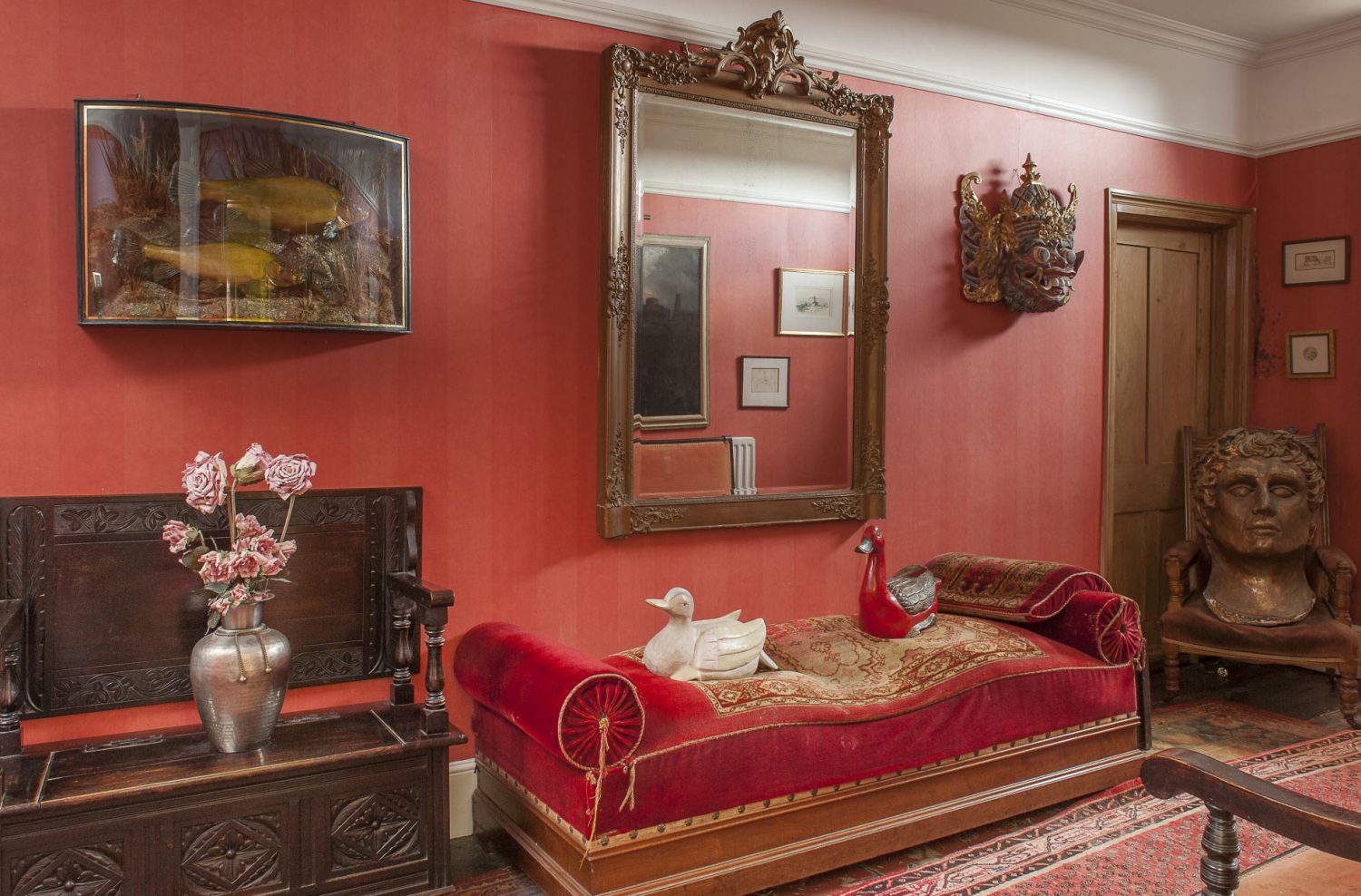 Mounted on the wall of the deep red hallway is a fierce Thai mask, two fat fish in a case and a French mirror the couple brought back from France. In one corner a chair is occupied by a giant Roman head from a film set 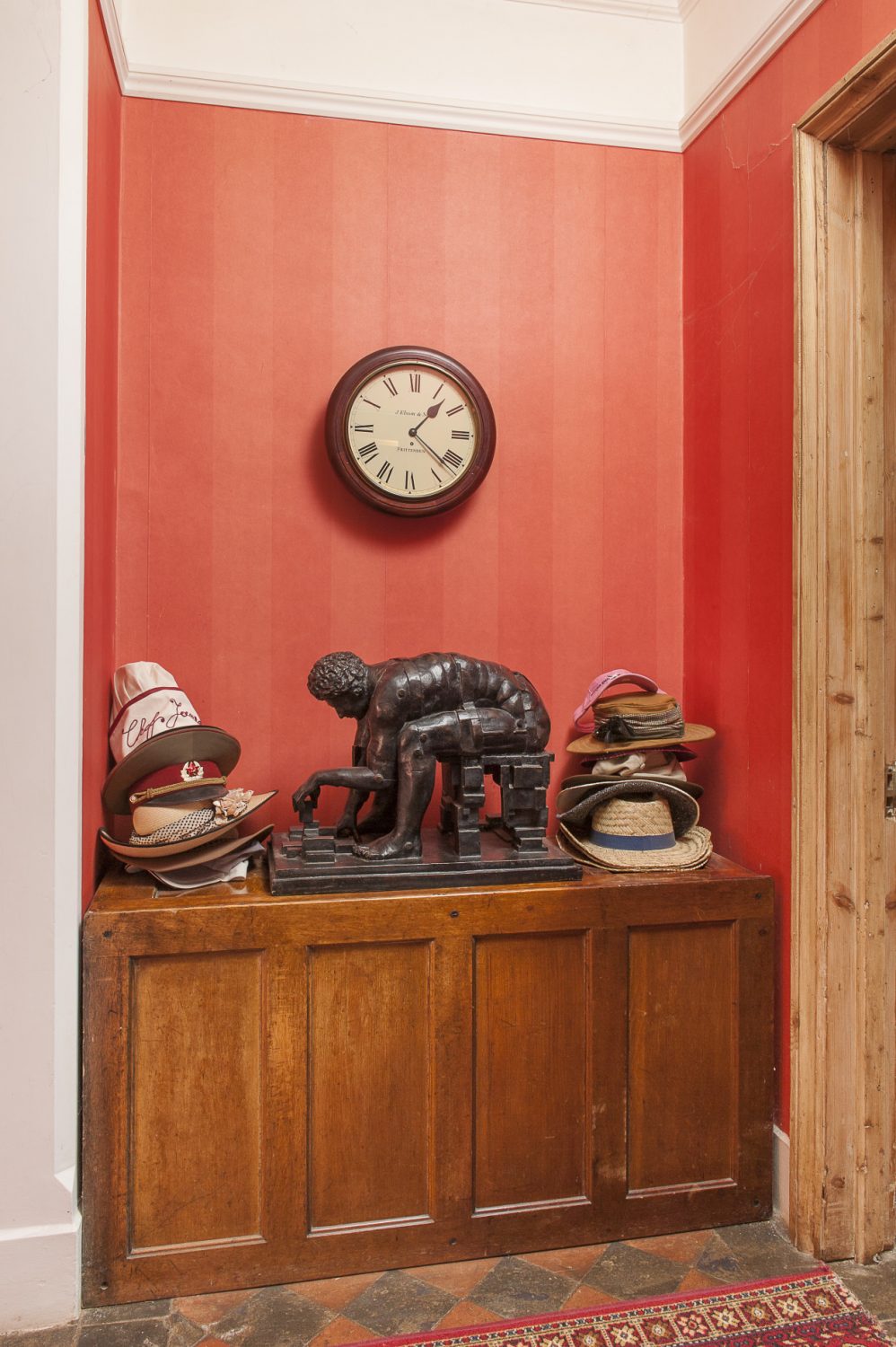 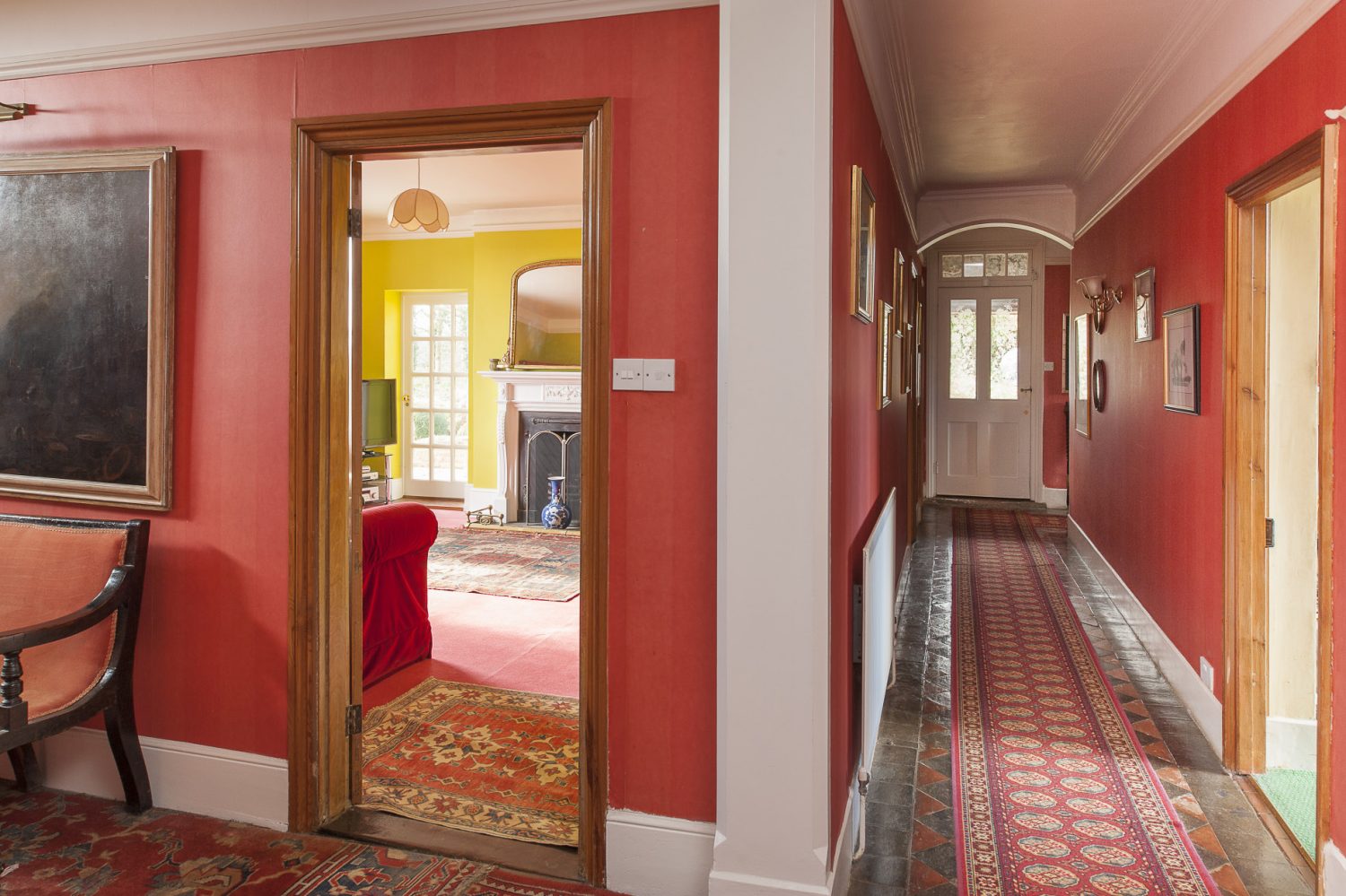 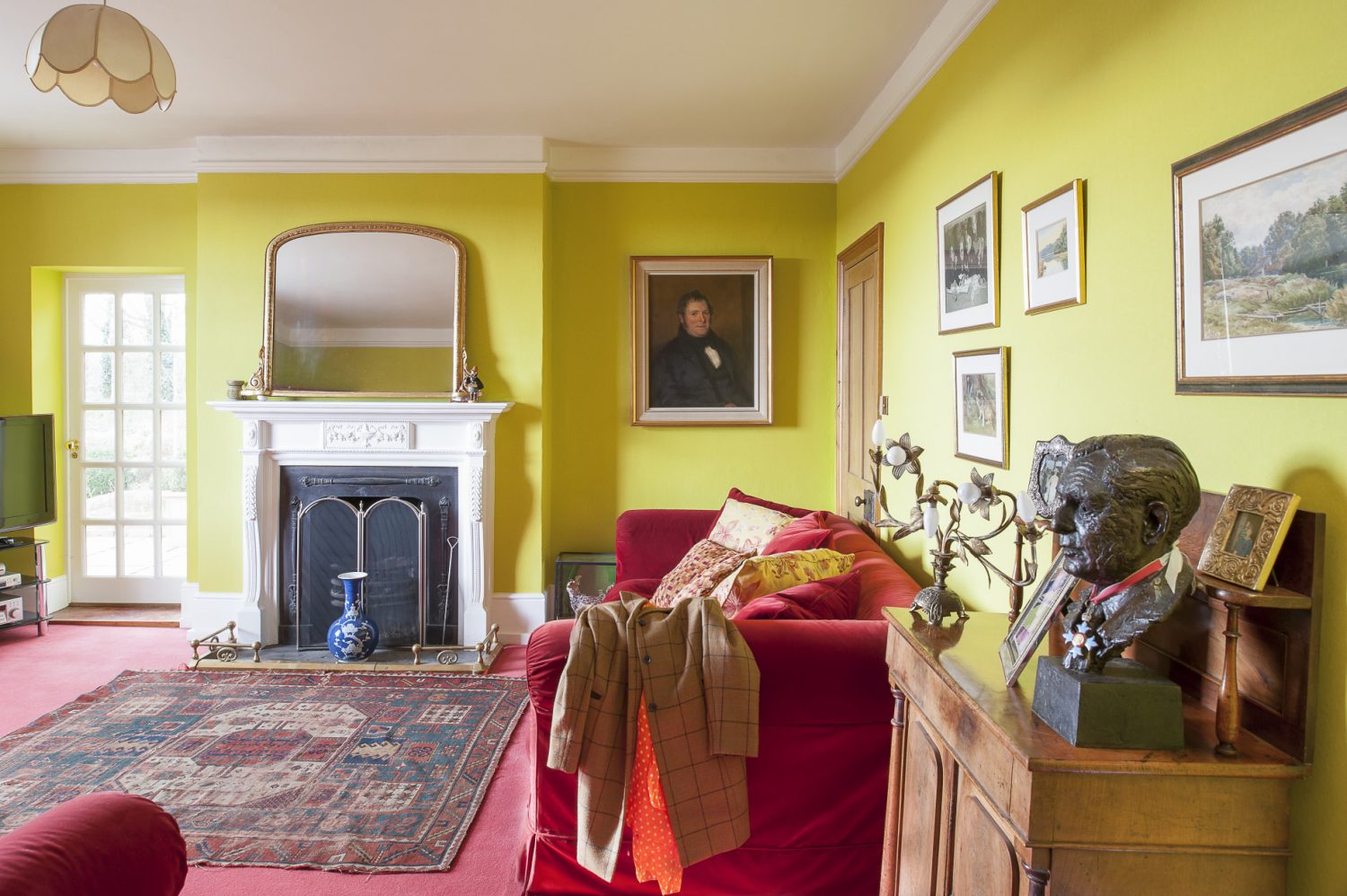 Over the drawing room fireplace is a Louis Philippe mirror and, flanking it, a portrait of Alex’s great-grandfather nicely complemented by a bronze bust of his father on a cabinet by the door 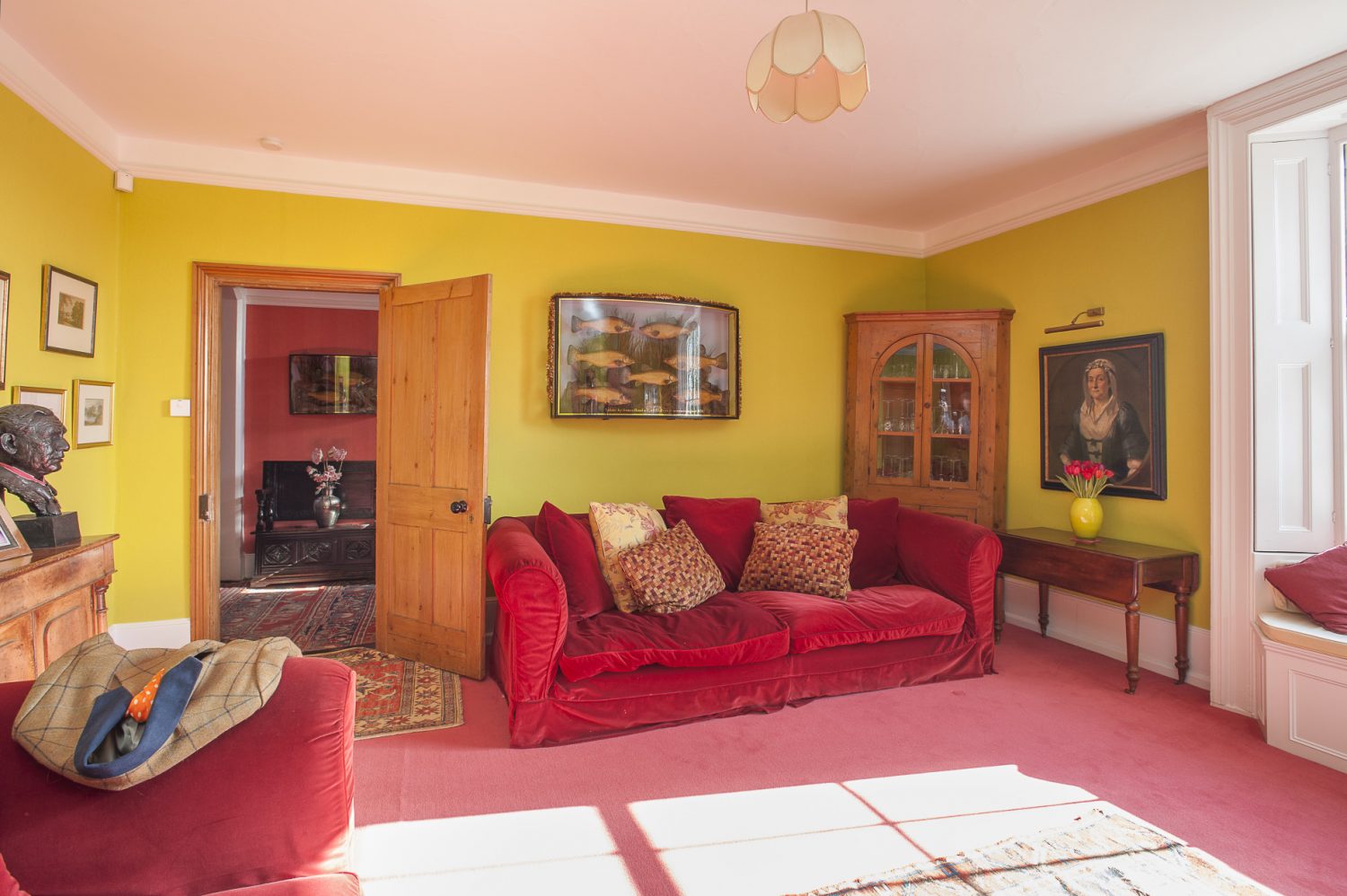 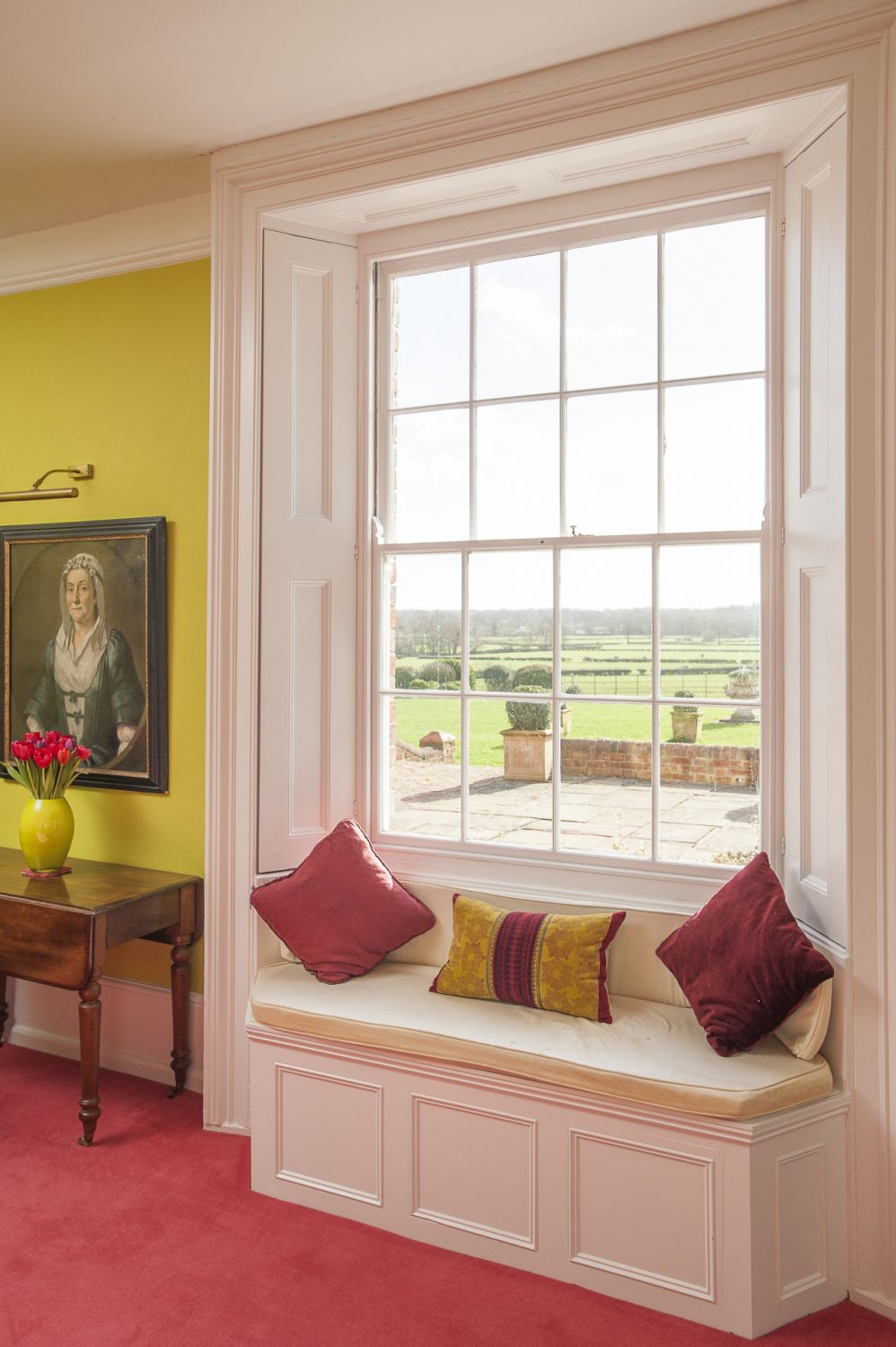 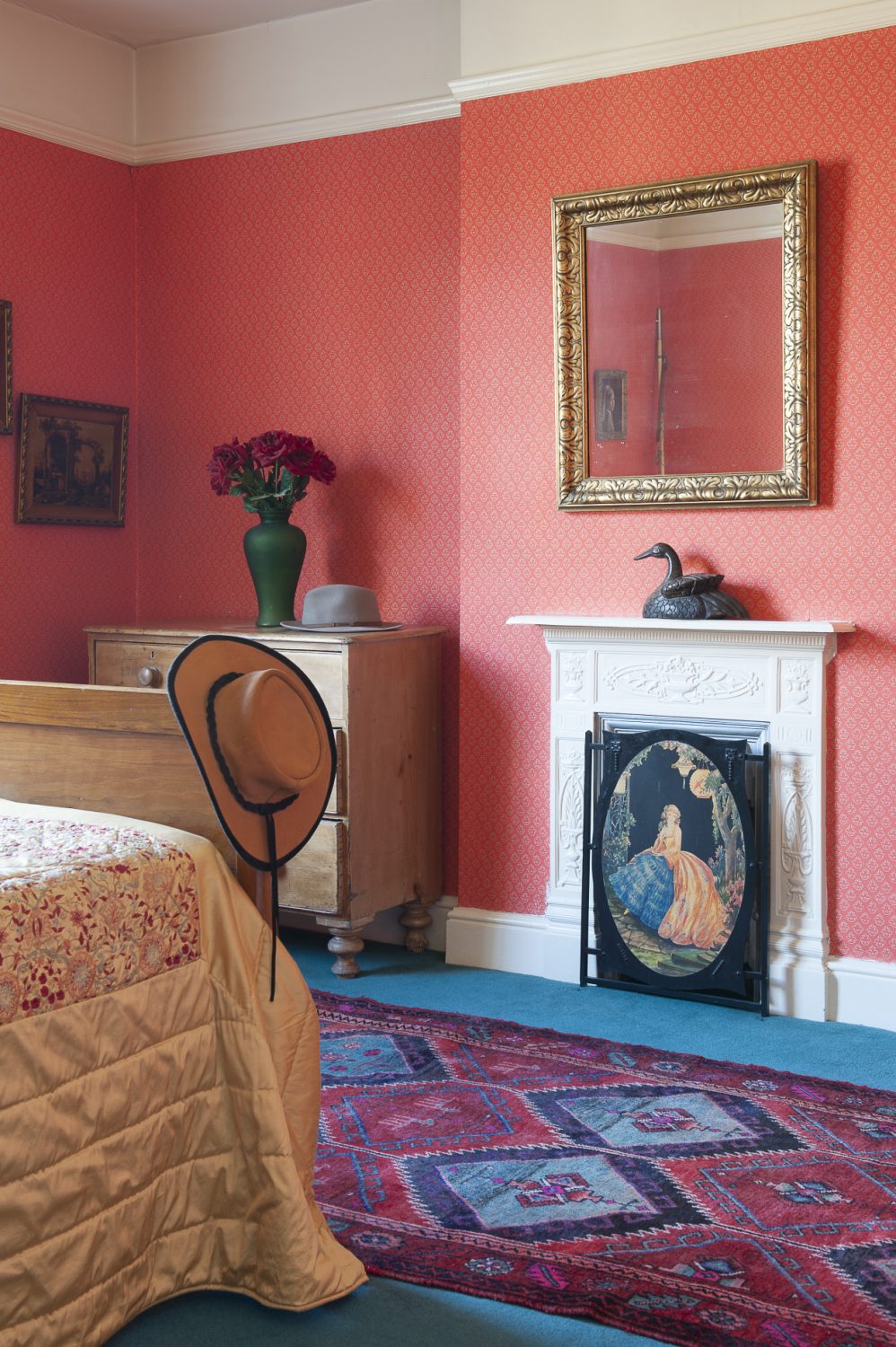 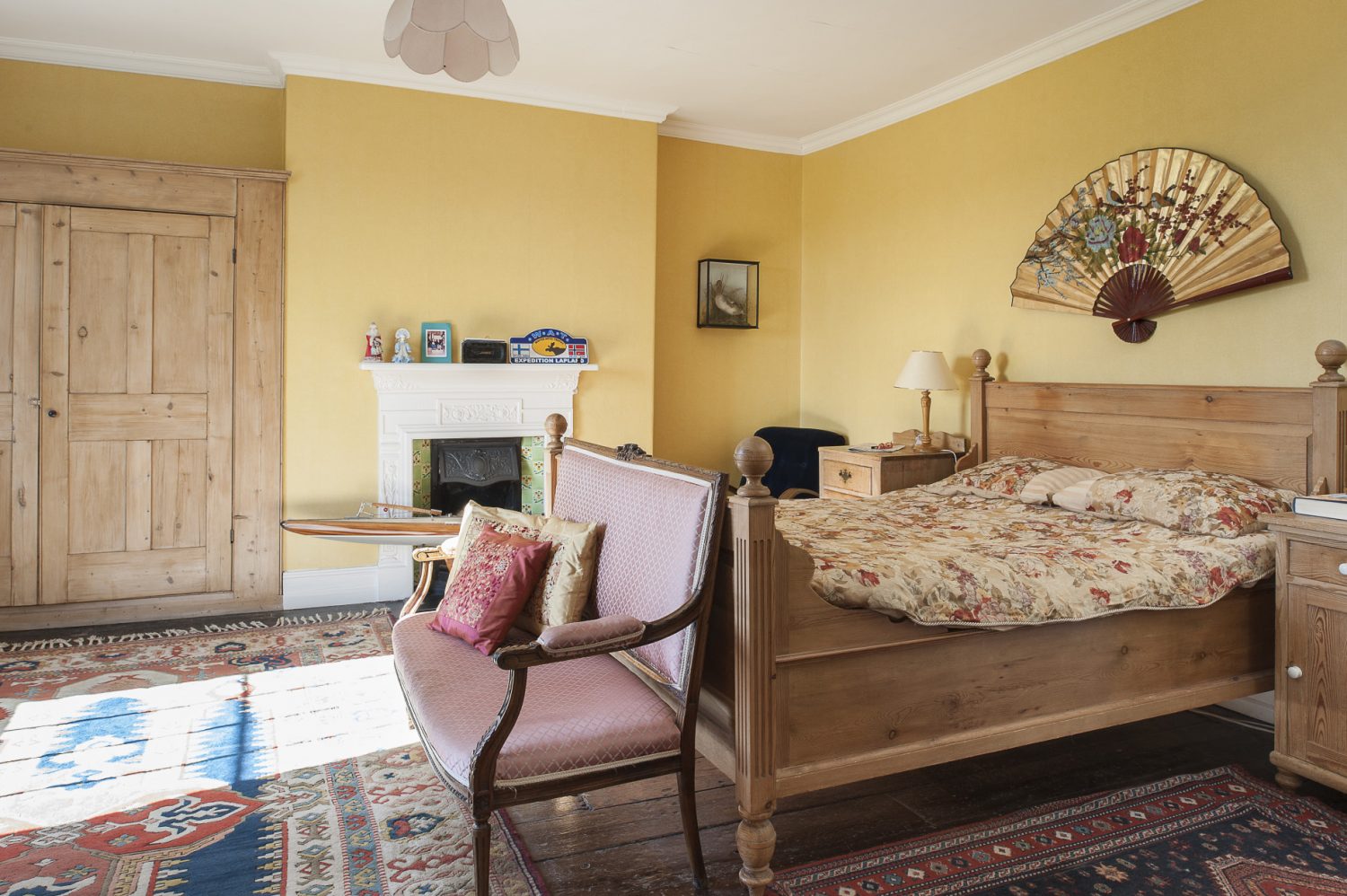 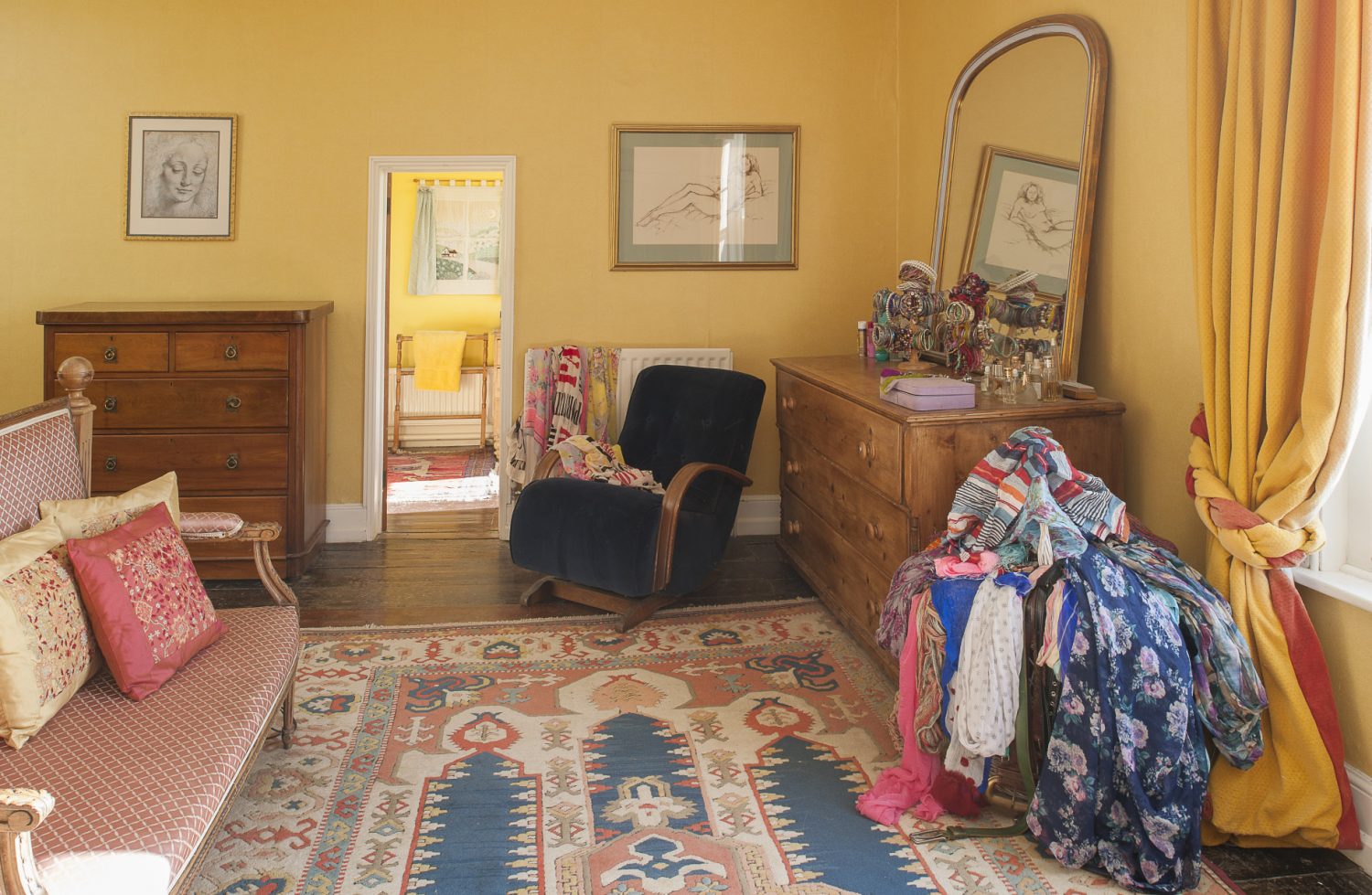 On the floor, a Turkish rug, another trophy from their travels 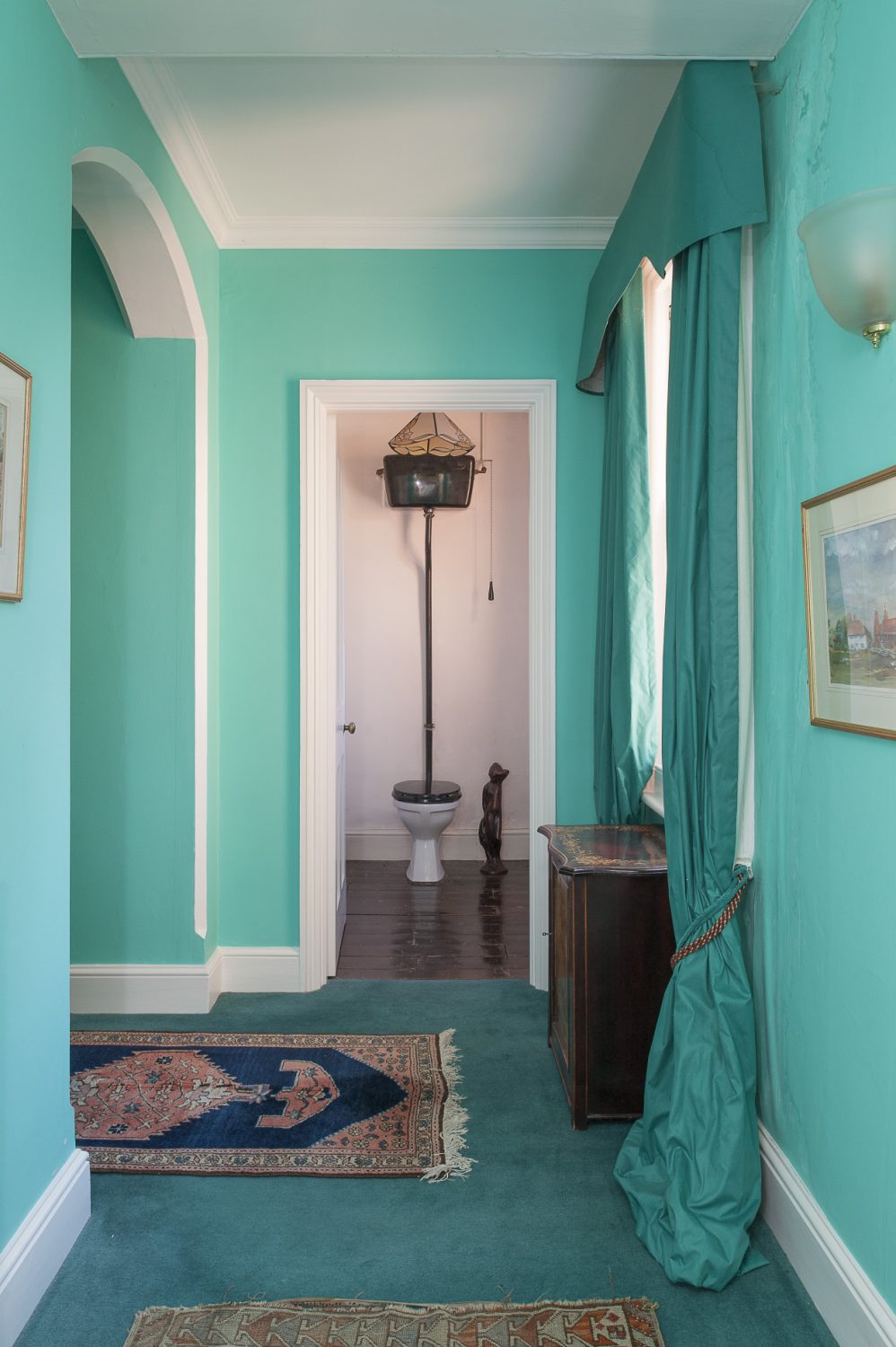 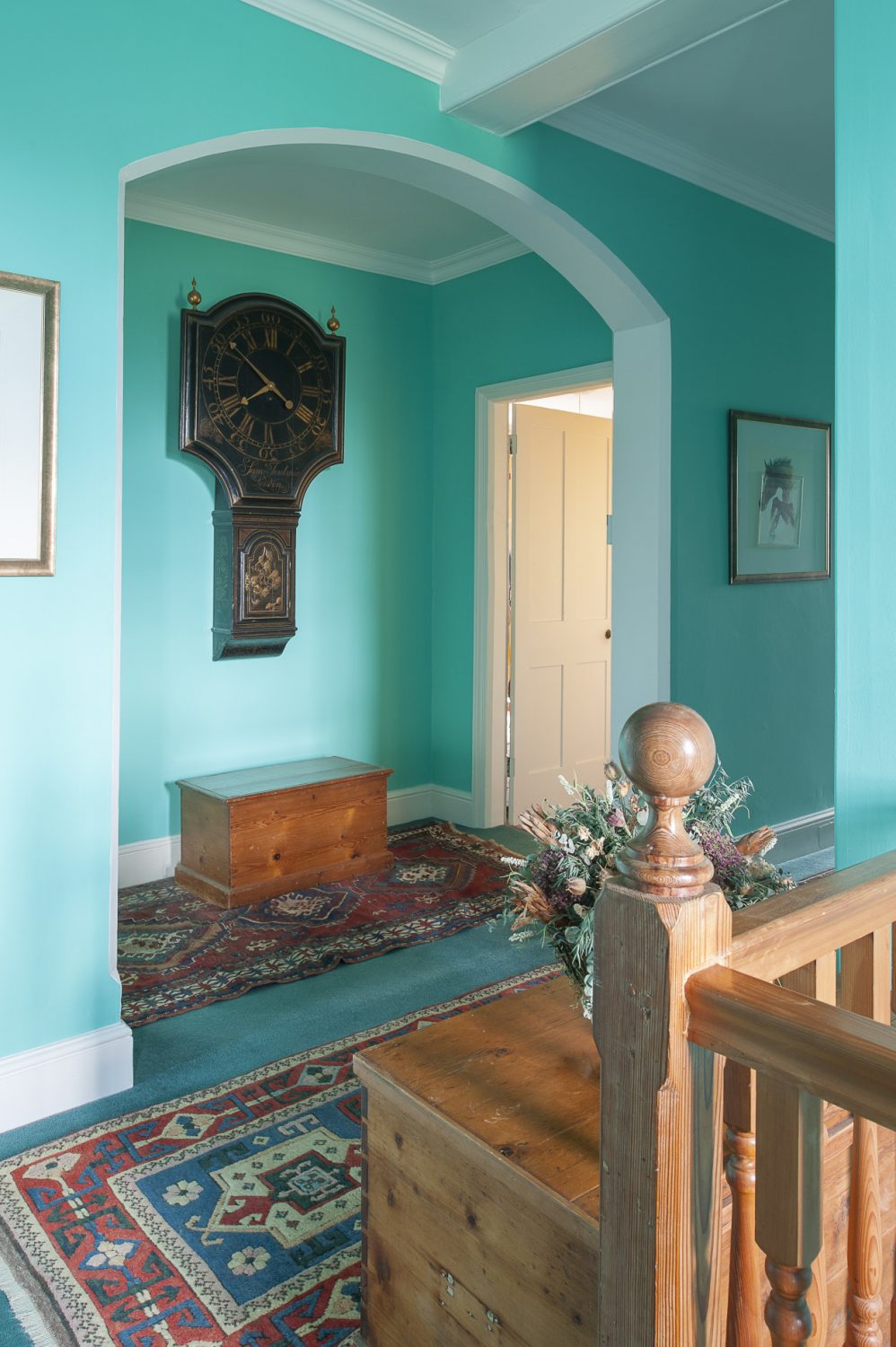 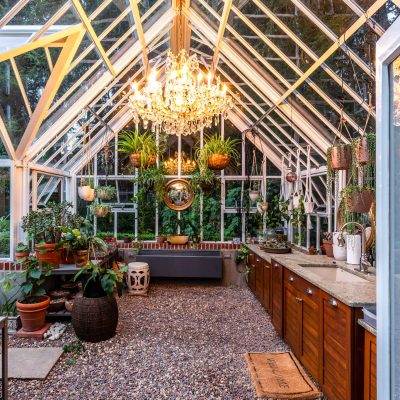 8 Ideas to Bring the Indoors Out

It’s a new age of garden rooms – filled with indoorsy luxuries but also seamlessly integrated into the outdoor world Lockdown left us all itching to get outside more, wishing our homes had a little more space, and desperately looking...