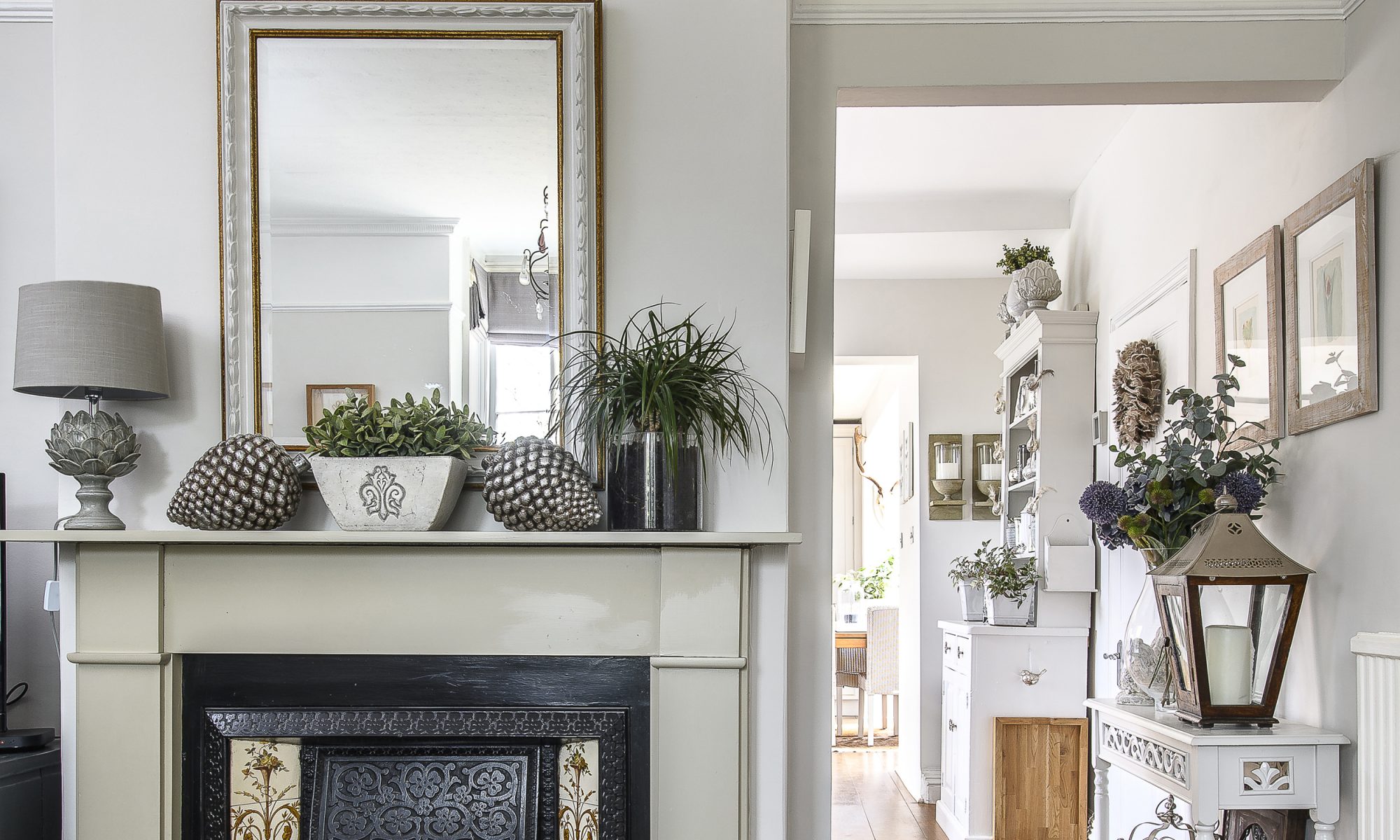 A family home that keeps things cool, calm and collected

Sometimes it’s not what you put into a house that makes it special – but what you leave out. In the Staplehurst home of interior decorator Esther Bauer and her husband Mark there is certainly nothing missing. You couldn’t want for anything, in this haven of family life, but what you won’t find is a lot of shouty colours, or hectic walls of bright paintings arranged in a ‘French hang’. Calm serenity is the vibe.

But while the colours are in a quiet melange of muted neutrals, this is no echoey minimalist space. I counted at least eight separate artichoke and acorn ornaments, of various kinds and sizes, several pairs of hares and a plethora of wreaths of different styles, among the array of lovingly arranged objects in every room. Esther laughs, when I point it out. “I love all my things,” she says, looking at the collection on her white quartz kitchen worktop, which includes a large silver bowl of hydrangeas, two large glass urns, one of the hare pairs, a hare lamp and various large round platters, among other treasures.

But while there is a lot of ‘stuff’ in this house – by which I mean objets, things that look nice but don’t serve any practical purpose – there is no sense of clutter.

This is because – unlike those terrifyingly overstuffed houses you see on TV shows (I was gripped by the series Stacey Solomon made recently, Sort Your Life Out, still on BBC iPlayer) – with these treasures there’s a visual theme. Esther curates rather than buying indiscriminately.
And she doesn’t leave it all out, all the time. “I switch it up,” she says. ‘‘I like to move things around and I get things out for different times of year, like Christmas and Easter. In winter I like to have fluffy things and then I’ll change them for spring. I just put the hares out for Easter.”

The other secret that makes it work is the common threads between all the disparate pieces. There is a repeated range of materials, in a very limited scope of colours – limed white, grey, silver, galvanised steel glass, wicker and twigs.

Then there are the themes – the wreaths, the artichokes, the hares, the lanterns – which I tease Esther about, but with respect, because having these two distinctly contained parameters is what makes this house, so generously furnished with lovely things, so appealing to be in.

Your eye trips happily from object to object, in a pleasing way and each chime of colour and subject is like a positive reinforcement. The human brain likes visual repetition, recognising connections between things is comforting at a deep level – and Esther uses it another way too, with pairs of objects a feature of every room.

No wonder friends started asking her for tips on decorating their houses – which is how her business, Esther Bauer Home Inspiration, started 15 years ago. “I started when our youngest child, Fleur, was little. Mark commuted up to town to work and I needed to do something that was flexible. I’ve always loved doing our houses – and friends and family would ask me for tips. So, I did an online course with the Interior Design Institute for a year, so I could show I had a qualification, and then the business just grew by word of mouth.”

But while you do want to be sure that a professional decorator is properly versed in the practical details of refurbishing a space (you can’t guess at fabric lengths for blinds and curtains, for example), it is clear from talking to Esther that her flare for what makes a house work visually, comes to her naturally. “Interior design is about more than new wallpaper,” she says. “It’s about the flow of the space, the flow of colours. That’s really important.”

This is certainly something that’s working beautifully in this house – and while Esther has chosen the paint colours, furniture and new floor treatment that make the ground floor work (they replaced the draughty original Victorian floorboards with engineered oak, in a warm walnut stain), the bones of this particular house made it much easier to achieve, without a lot of renovation. Which is funny, because they tried very hard not to buy it.

Like many of the houses featured in this magazine, the Bauer’s home was the result of leaving London in search of a haven to raise a family. “We were in Clapham and then Dulwich,” says Esther. “When we decided to move, we looked at all the property search sites and every time we put in our criteria this house came up. We kept saying, ‘It’s too far out…’.

“We looked in Sevenoaks, but it was the same price as Dulwich. We looked at small cottages and knew they wouldn’t fit our furniture. This house still kept popping up and it was beginning to annoy us!”

Then fate stepped in, where repeated online hints had failed to work. Esther’s mother came over from the Netherlands to visit. “My mum is passionate about gardens and she was in Kent to look at some of the lovely ones here, so I came down from London to see her and said, ‘I’ll just have a look at that house which keeps coming up.’

“It was all very dark, with dark carpet and heavy curtains, and it felt a bit unloved, but the minute I walked through the door I thought, ‘I’m going to live here.’

“I saw it on Monday, made an offer on Tuesday, had it accepted on Wednesday – and Mark didn’t see it until the weekend. I rang him and said, ‘I’ve found our house.’”

Luckily Mark loved it too and, 18 years later, it’s clear it was the right choice. “We thought we’d be in this house five years and then move somewhere more rural, but the train and the bus are so close, so with three children and my husband commuting to London every day, it made much more sense to stay here. And the house facilitates everything.

“My family come over from Holland a lot and it just works. It has five bedrooms, so we can accommodate a lot of people and there are two reception rooms, so there is somewhere quiet they can go to read, or watch something different on television. And the ceilings are high – we are tall people!”

So all they had to do to create a generous modern kitchen, with a large dining area for big family meals, was to widen the extension a little, which they then finished with a glass roof, flooding the whole kitchen with light.

Esther’s calm, flow philosophy then came into play with the kitchen design. Rather than a space-hogging central island, she went for an L-shaped return, creating a breakfast bar (great when the kids were little), that doesn’t break up the through-movement of people – or obscure the vista through to the second sitting room beyond, to the front of the house.

This long view was created when they took out part of the wall between the spaces. Previously that room could only be entered via the door in the main hall.

This one, small change, has created a circular route round the middle of the house, which always makes a place feel generous and pulled together. It’s a feature of many American homes, relatively rare over here, that always makes a house seem bigger and more welcoming. (We should have more of it.)

The kitchen storage is arranged with two sets of Quaker-style floor-to-ceiling cupboards, at either end of the room, creating another of Esther’s pleasing visual chimes.

The ones at the sitting room end are general storage, the others, on the working, cooker side of the return, are where the serious kitchen business happens. “The larder cupboards are deceptively deep,” says Esther, “with sockets in them so all appliances can be stored inside. I didn’t want cluttered work tops – so I would have room to put out my decorative stuff.”

The human brain likes visual repetition, recognising connections between things is comforting at a deep level – and Esther uses it another way too, with pairs of objects a feature of every room.

Which indeed she has, all set off beautifully on the fresh white quartz worktop.

A bold feature in the kitchen are two industrial-style lamps hanging over the breakfast bar. These are from Neptune, as are the rattan high chairs at the breakfast bar, with dining chairs in the same style round the large wooden table, which was bought specifically for the space (and has two more hares prancing across it).

Opposite that, in the conservatory-style space, under the glass roof, is a lovely old cabinet, brought back from Holland, on one of their frequent family trips over there – which they always do by car. All the better for bringing back Esther’s new purchases…

On enquiry it turns out that, while there is a touch of Homesense and a lot from local speciality stores – Woodcocks in Tenterden is a favourite – a lot of the beautiful objets in the house have been acquired on these trips. “There is a chain of garden centres in Holland which has fantastic homewares,” Esther tells me, when I’m admiring the storm lanterns on her sitting room mantelpiece. “It’s called Intratuin.”

A quick Google search reveals that this translates roughly as ‘integrated garden’ and having had a look at the lovely things on the website, a trip to Holland via Folkestone (the way they go) looks very appealing.

Just on the other side of the kitchen is the boot and utility room, plus a downstairs loo, which I’m surprised to find is finished with very brightly coloured floral wallpaper. “That’s my one little mad room,” says Esther. “I thought let’s have every colour in one place!”

And this does show that while she loves a neutral palette in her own home, she’s not afraid of colour, if that’s what a client wants. “I never do bold colours at home, but I love doing them for clients,” she says. “I don’t impose my style on other people. I am guided by what they already have and we talk about it. Your house should say something about you, it’s not a show home.

“One client had a 1960s house and she wanted to decorate it in that style, with bright wallpaper. It was really fun to do, but with three kids and a dog, my life is colourful – I want serenity around me.”

This is exactly what she has, with carefully considered flow of space and colour, her treasured objets displayed for maximum effect. In which way, they do serve a purpose: they gladden the eye.

Speak to Esther about interior design through her company, Esther Bauer Home Inspiration, on 07854 741129 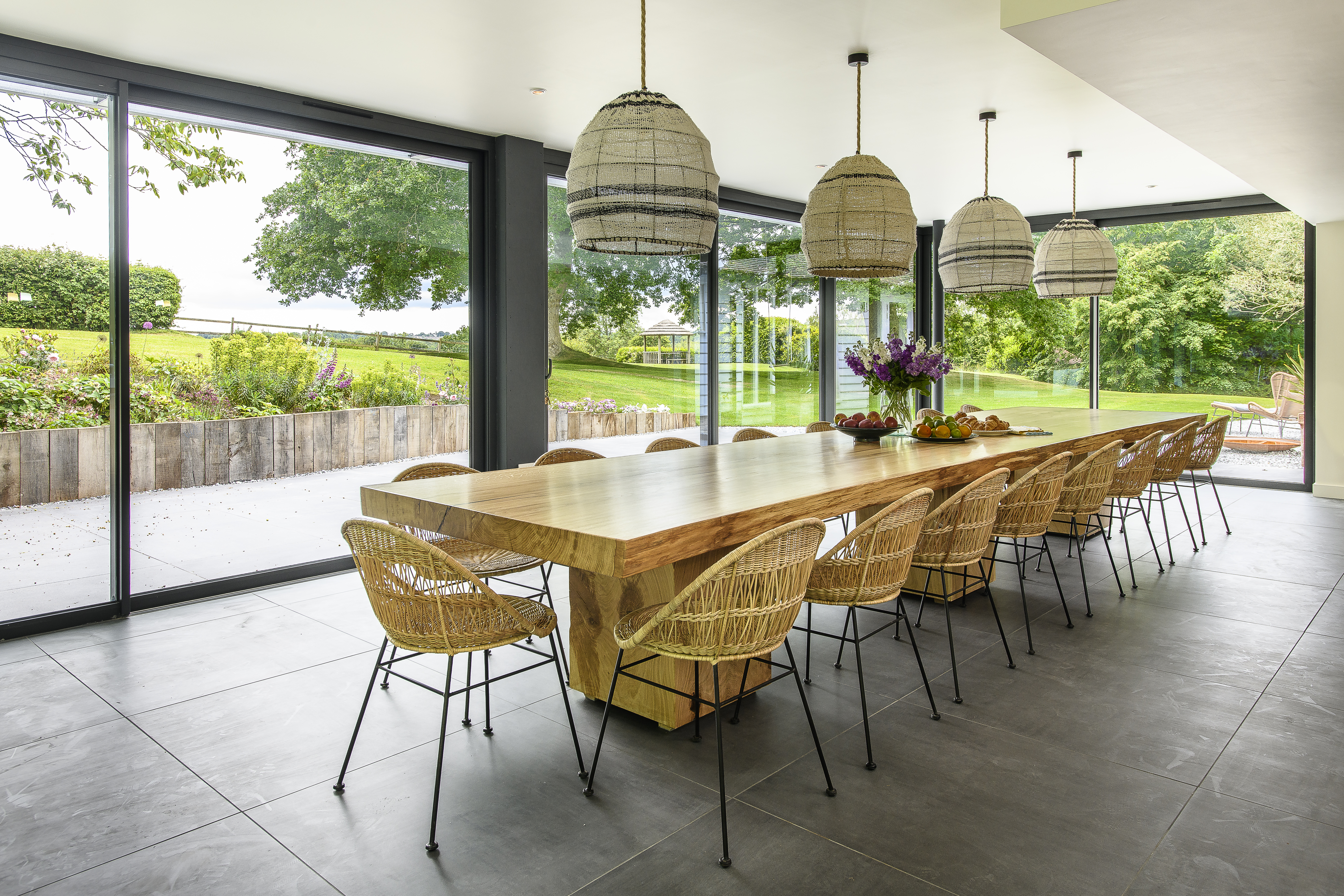 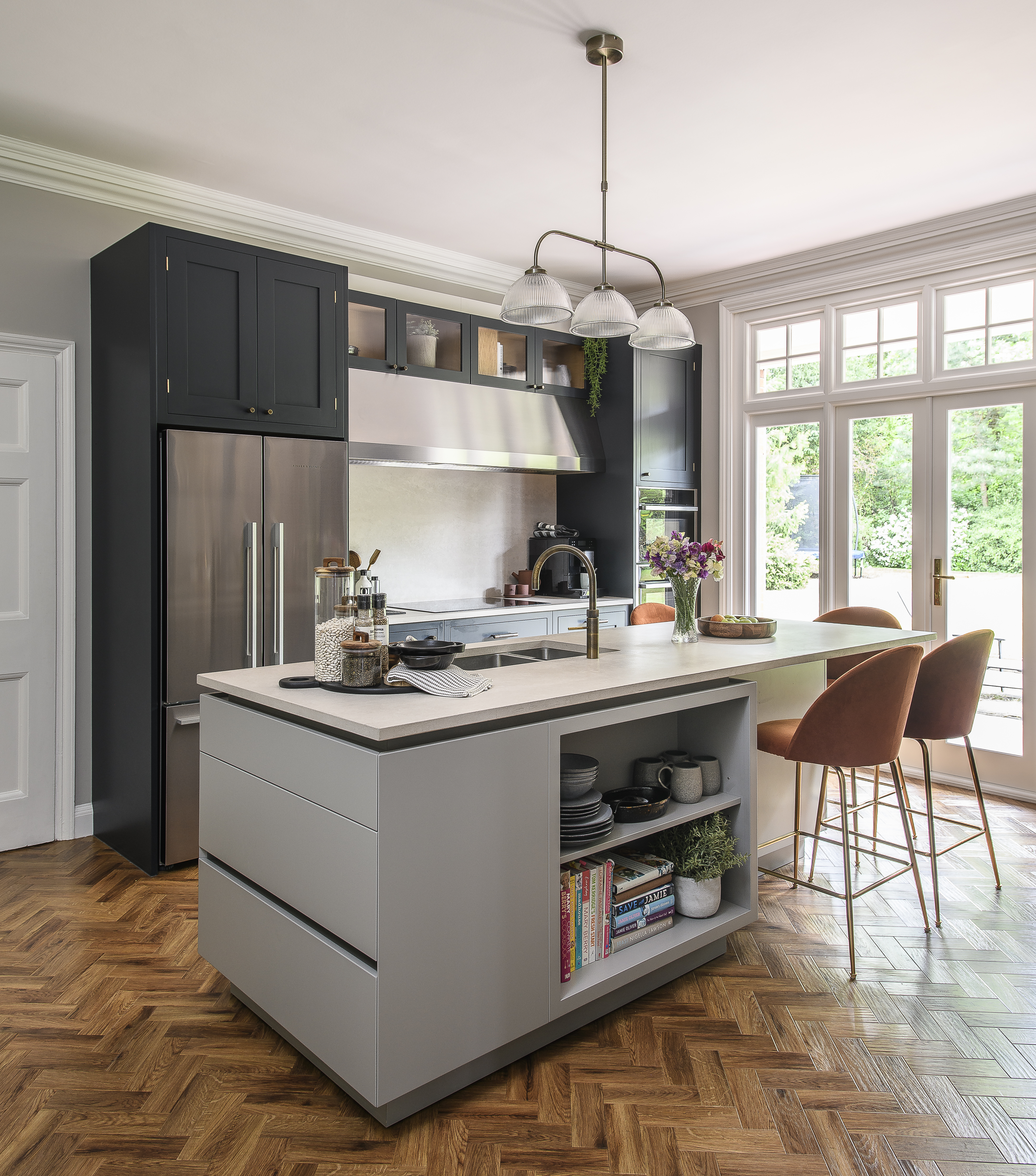 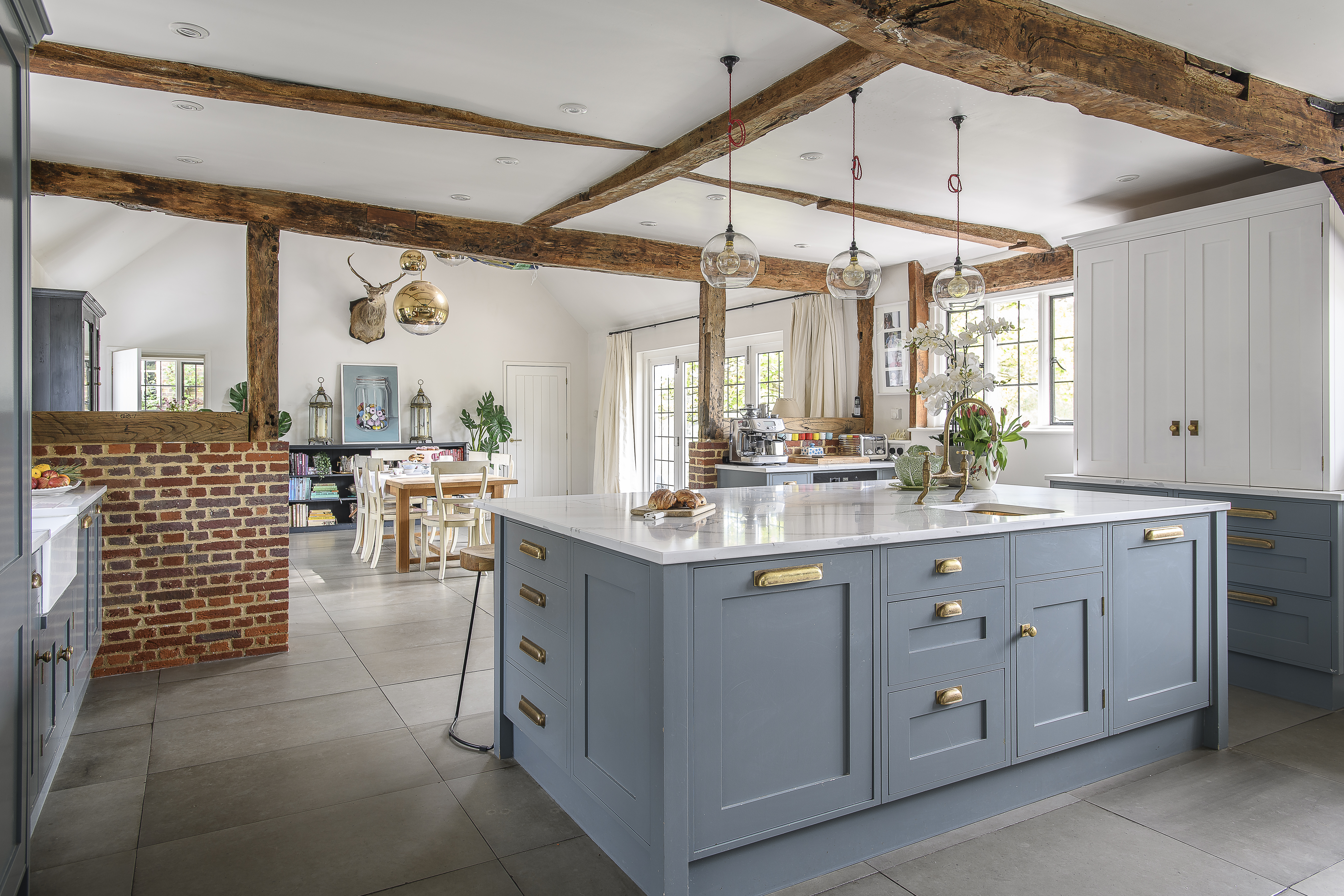